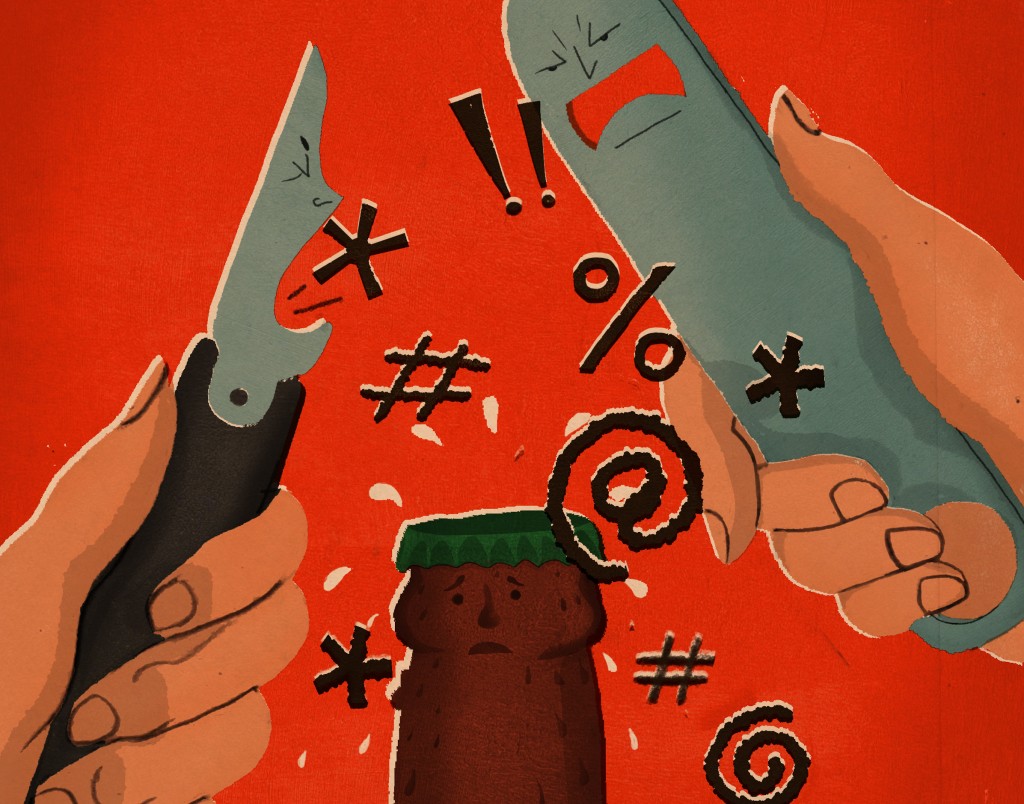 When this magazine posted its top 25 Beers of the Year list last year, a Facebook commenter, enraged that some of his favorite beers didn’t make the cut, referred to us editors as “a bunch of inbred morons.” I didn’t lose any sleep over the ad hominem attack, because I read posts like that all the time. They’re directed toward breweries, other beer drinkers, beer publications, you name it—and they appear on social media and beer blogs regularly. But … why? And didn’t beer used to be fun? It’s easy to entirely blame the Internet for creating an anonymous place where beer drinkers shake their fists and hurl insults without consequence. But there are more complicated group dynamics at work. As the craft beer world draws in new, vocal fans every day, it’s time to get to the root of the collective indignation.

It’s useful to go back in time and visit the online beer scene in its infancy. In 2000, a website called RateBeer, primarily a beer rating website that also has discussion forums, was founded. Sixteen years ago, with fewer people interested in craft beer and even fewer interested in joining communities on the Internet, RateBeer users were primarily global beer fans who, generally, were civil to each other. (Joe Tucker, who began working with RateBeer in 2001 and now owns the site, also notes that many of the first users were Danish and British, and “those cultures tend to be a lot more reserved.”) Today, RateBeer turns over approximately 10,000,000 page views each month.

Todd Alström and his brother Jason founded Brewguide in 1996; it’s been known as BeerAdvocate since 2000 and is another popular beer rating and forum website which today has 564,000-plus registered users. The Alströms, as well as other site moderators, closely monitor members, and reports of users banned for misconduct or, some claim, simple dissent, are easy to find. But tempers certainly still flare. On a recent forum thread about infections in some of Goose Island’s 2015 Bourbon County Brand Stout variations, a Savant user (which designates a person who has accrued a lot of experience on BeerAdvocate) posts: “If this is how Goose Island repays their veterans and hardcore supporters of what USED to be one of the GREATEST products on the market than the Geese need to be SHOT DOWN AND BUTCHERED.” To which another savant user responded: “I do love to see the calm, measured responses, made when all evidence is in, that we have grown used to seeing here on B.A.”

The tensions aren’t limited to just RateBeer and BeerAdvocate. Even smaller, localized websites like St. Louis’ STL Hops forums have seen numbers grow from 2009’s base of 30 to 40 users, who nearly all knew each other offline, to 2,000 members today who may not even know each other’s real names. That increase can lead to, euphemistically, differences of opinion.

That’s because with a larger crowd, individuals have to shout louder to be heard. “The more stable a group is over time in terms of its membership, the more it can work out conflicts. When more people enter the group, that creates a Wild West atmosphere,” says John Suler, professor of psychology at Rider University and author of “Psychology of the Digital Age.” “When people are talking about something that is so intrinsic to their identity, like religion or politics, or in this case, beer, they can become very defensive and unwilling to hear other opinions.”

So in 2016, we’ve come to a place where beer ranks alongside religion and politics as no-go dinner table conversation topics? Will Gordon, a Boston-based freelance beer and food writer who regularly reviews beers for the Gawker-affiliated site Drunkspin, sees beer as so central to some people’s lifestyles that they’re unable to tolerate opposing views.

“There is a peculiar, loud 1 percent of craft beer fans who are people with an absurd lifestyle that they want validated,” he says. “If you make fun of driving up a dirt road in Vermont at 7 in the morning to get a bottle of Hill Farmstead, what those people hear is their wife’s voice saying they should have gone to the kid’s soccer game that morning instead.”

Some see the divide—and its attendant posturing—as a schism between the old guard of beer and its newer fans.

“As craft beer becomes more mainstream, people who have been really into beer for years are wanting to differentiate themselves,” says Jeremy Danner, ambassador brewer for Boulevard Brewing Co. in Kansas City, Missouri. “Because there are so many ‘regular people’ that are into beer now, people who feel like beer has been their precious thing see that it’s getting crowded by consumers and it’s making lines longer, beer bars busier, and certain beers harder to get…”

Bringing more people into the fold creates competition. The scarcity of once-available bottles is certainly another cause of hand-wringing and online teeth gnashing.

“I see this on Facebook, where people are enraged that they can’t get a bottle of a beer when there were only 150 bottles made. They can’t fathom why a top brewer in the world or a beer brewed by monks isn’t converted into a gigantic industrial brewery to supply the world,” says Tucker.

But heaven forbid that same small brewery sell to a larger corporation like Anheuser Busch-InBev and ramp up production, as some have over the past few years. The online community is then apoplectic for the opposite reason, fearing that once-artisan beers will be watered down, mass marketed, and for sale in a highway gas station.

Case in point: When Duvel bought Boulevard in 2014, Danner felt the backlash.

“Especially in K.C., we’re very much their brewery. It would be weird if people didn’t freak out [over the sale] a little bit. There was some negativity, people posting ‘Sellouts!’ on Facebook, dudes saying they’re going to pour our beer out in their driveway,” he says.

If the push-pull between supply (“Keep it small!”) and demand (“But I want a bottle!”) sounds like a catch-22, it is. It’s a product of people feeling like they deserve to own every awesome beer, says Mike Sweeney, creator and editor of STL Hops and an employee of Lohr Distributing, a family-owned Anheuser-Busch and craft beer wholesaler. “There’s a level of entitlement that people have. I don’t know if it’s a generational thing or it’s just new beer versus old beer,” he says. “I don’t concern myself with having to get XYZ beer. Beer should be about making friends. Then, even if you don’t get to own a bottle, if you’re a cool person and not a jerk, you’ll get to try it at a bottle share.”

“I have a very different relationship with craft beer as a product than other goods,” says Bill DeBaun, one of the editors of DCBeer.com and the author of a sometimes snarky personal Twitter account, @dcbeerbill. “I don’t tweet like this about ketchup. I haven’t spent one-hundredth the time with any other kind of product that I have with craft beer. It’s not just going home to a six-pack in the fridge; a lot of my social life is tied up in this product. People understand that ketchup is a business, but do not want to accept that beer is a business. And I’m guilty of that, too.”

So while some bemoan beer drinkers’ indignation, that individual emotional connection positively translates into sales of not just beer but merchandise, event tickets and bottle subscriptions from breweries.

DeBaun equates his passion with a license to give feedback to breweries, both positive and negative.

“If people start fucking up in craft beer, it’s more than just ‘Oh, you made an ugly six-pack holder,’” he says. “This is a product that a lot of us care about and spend time debating and arguing about.”

Danner, who spends much of his time responding to social media for Boulevard and his personal accounts, says that when tempers flare and discussions get nasty, he has to remember that, at best, it’s a product of hardcore fandom. Best-case scenario, the positive voices in the beer community—online or otherwise—step in to calm tempers. In forums, website moderators can place an overheated commenter in a temporary sort of “time out” that blocks them from posting.

“How a user responds to moderation comes into play,” says BeerAdvocate’s Todd Alström. “Most deal with it and move on, others throw temper tantrums worse than a child.”

If there’s no moderator, though, as in the world of social media, anger and even threats can go unchecked. Drunkspin writer Gordon is adept at deflecting online criticism (he credits his Boston sports fandom for his acclimation to conflict), but says the hostility is worst when he pans a regionally beloved beer from a brewery like Yuengling or Harpoon.

“Those classic regional beers, people will get up in arms about. It’s heartwarming in a way, before it gets insane and violent, which usually takes about two tweets,” he says. “Then suddenly someone’s threatening to rape my cat.”

Ad hominem attacks reached their highest point when Gordon wrote about sexism in the beer industry (citing offensive label art and a 2015 beer week event held at a strip club) for Slate Magazine, sparking “anti-P.C.” backlash. One of the 500-plus comments on his article reads: “I hope this article helped you get laid, but if not, maybe you should drink more. So you aren’t so uptight, eh?” Gordon could follow the adage “Don’t read the comments,” but it was harder to ignore social media attacks directed straight to him.

“That was a shitty 36 hours of my life,” he says. “When the article came out, I was on an Amtrak train, and I spent the ride blocking dozens, possibly hundreds of people on Twitter.”

In rare cases, offensive bad apples can nearly spoil a community. According to professor Suler, that’s when a group is tested to see whether it can survive the bickering.

“You need a critical mass of people who are sane and don’t want to perpetuate the hostilities,” he says. “It’s also good for the overall group to remember the higher purpose, which in this case is to promote good beer.”

Perspective, moderation, mutual respect. These are the tenets are well-functioning community, whether it’s based on beer or anything other interest.

It’s something I keep in mind when I read Facebook attacks and name-calling on forums. It’s helped me not take criticism personally. Boulevard’s Danner offered another bit of perspective. When he has an especially tough day on beer social media, he remembers: “We’re lucky that people take the time to give us feedback, and we’re lucky that we don’t do social media for an airline.”

Beer Master - September 27, 2021 0
Flickr photo by Chris Elt Nearly 35 months ago, I decided I was going to run at least one mile and drink at least one...