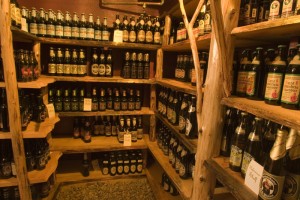 Today’s (thirsty) Thursday, which means it’s time again to talk a little about cellaring your beer. Last week we got some tips on how to build your cellar, and today we’re taking a look at specific styles and how profiles develop over time. One of the foremost authorities on the topic, “Dr.” Bill Sysak, sat down with me to discuss the evolving profile of some of the best styles to cellar. But first, a bit of background about our expert.

How many bottles are in your personal cellar?
It varies anywhere from 800 to 1,500 over the 20 years I’ve been cellaring.

What’s the oldest bottle you have?
The oldest bottle I have right now is a 1968 Thomas Hardy Ale, the first vintage. In 2001 I was one of the first people to do an entire vertical tasting of the series. I’ll probably keep this one for another 5 or 6 years.

Cellaring: Evolving Flavors
It’s long been considered in this country that beer’s best served fresh. For some styles, like a hoppy pale or a bright, crisp pilsner, that’s definitely true. For other bolder styles, a few years in your cellar will tone down big alcohol notes and allow rich fruity flavors to develop. Here’s an easy guide for what to expect when you open up that aged beer.

Imperial Stouts
“A general rule for all bottled beer is that if they’re high-AVB, you’ll see a decrease in fusel alcohol notes,” says Sysak. “Another thing that happens with imperial stouts is that as they mellow, the astringency, from flavors like roasted coffee, will also decrease.” Sysak notes that as this happens, the more subtle flavors you may not have noticed before begin to emerge. Vinous characteristics, like dark fruits, become more prominent alongside an aged leather flavor.

Old Ales and Barleywines
“The fusel notes are huge in these, so you’ll see that basically decrease along with all hop notes,” explains Sysak. “All the fresh flavors will drop down, but more malt sweetness, like toffee and caramel, will come in.” As the sharpness of these styles mellows, Sysak says a sherry or Madeira character comes through. You also get oxidation, which carries a lot of negative connotation in the beer world. However, Sysak notes that for this particular style, “The cardboard flavors come through and end up being more complementary with style’s caramel and toffee. The overall mouthfeel has an almost umami effect.”

Belgian Dark Strong Ale
For this style, brewers use invert sugars, which leaves a lot of residual sweetness in the mouth. “You’ll find a decrease in the residual sweetness, even though beers tend to get slightly sweeter as they age,” says Sysak. “That big over-the-top candied sugar flavor diminishes, but you’ll pick up more dark winter fruits like figs, dates, prunes and raisins.” For the fruit fiends, Sysak also notes that it’s possible to taste summer stone fruits, like cherry or apricot, as the flavors really blend together over time.

Flemish Sours
“They’re more acetic than acidic, so you’ll want to think balsamic vinegar notes,” says Sysak. “The sharpness will decrease, so you’ll start to have a more well-rounded flavor. The fruits will come through but you’ll get more malts, and even notes of cola and earthy, funkiness.” Both the red and brown varieties will become more subtle over time, but Sysak says the browns, or Oud Bruins, in particular develop a sherry profile that can showcase winter fruits like golden raisins or intense black cherry notes, which pair well with the cola flavors.

Lambic and Gueuze
“This is the trickier one because it’s the lowest in alcohol of anything you’d age, and some people really like the sharp characteristics of certain lambics,” says Sysak. “The beer will lose that and become softer on the palate, but they’ll still have that nice acidic mouthfeel, just not over the top.” Wonderfully subtle fruit flavors eventually emerge, ranging from exotic papaya to peach, apricot and nectarine.

That’s it for this week. Tune in next Thursday when we tackle cellaring once again. In the meantime, if you have questions, post them in the comments and I’ll do my best to have them answered.

25 breweries on the rise