Traverse City, Michigan
7monkstap.com
With a name referencing the number of Trappist breweries worldwide (as of the bar’s opening in 2011), you’d be forgiven for mistaking this 46-draft taproom as a Belgian-only bar. Yes, you might see Delirium and Brasserie Dupont on tap, but the bar also pours fun Michigan- and Midwest-brewed beers from Short’s, Brewery Vivant and Prairie. Staff is friendly and more than willing to make recommendations, which should also include a tip about how great the food is. The bar plans to open a Boyne City, Michigan, location mid-June and a 57-tap Grand Rapids location in October.

Bier Station
Kansas City, Missour
bierstation.com
The three-and-a-half-year-old bar and retail shop was already a go-to spot for beer in K.C. (a real-time list showing what’s on the 28 drafts might inspire an impulsive lunch-hour beer run), but it has upped its game further this summer. Having recently purchased its building, Bier Station added a front patio, complete with retractable canopy and dog-friendly leash ties. It’s also one of the first bars to debut the Maegan app, which means guests who download it can order from their tables instead of fighting their way to the often-busy bar.

Bridge
St. Louis, Missouri
thebridgestl.com
Special indeed is the beer bar where you could take a date for dinner and consider donning an ironed shirt. The chandelier-lit bar, back-dropped by shelves of bottles and a wooden library ladder, pours 55 drafts with a couple hundredmore in bottles; it’s especially rich with Missouri breweries including Civil Life, Crane, Mark Twain and Perennial. Willow, a recently opened events space next door, hosts weddings and private parties as well as beer events that, in the past, have welcomed Founders and New Belgium. 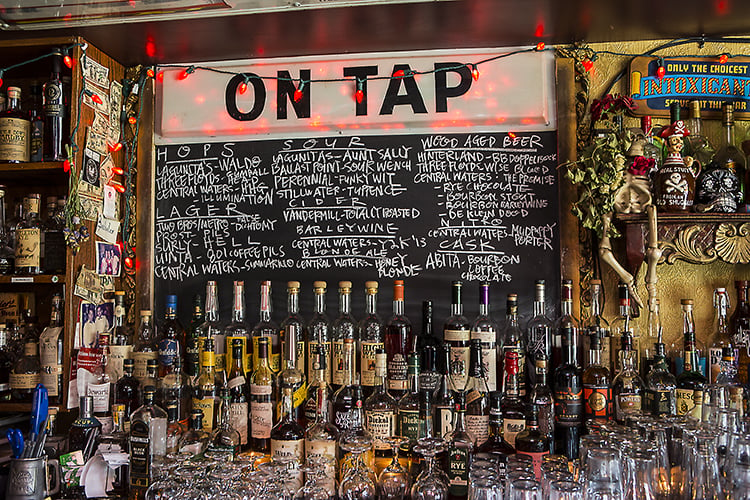 Burnhearts
Milwaukee, Wisconsin
burnheartsbar.com
When owner B.J. Seidel opened his Bay View corner bar nine years ago, he was only beginning his journey into craft beer. As his interest grew, so did the bar’s beer focus, which now finds expression through 24 draft lines, two cask offerings and a deep bottle list of quirky cellar gems. The bar retains its comfortable Midwest sensibility even as its popularity among local beer geeks grows; both sides are on display each winter when the bar hosts its annual Mitten Fest, tapping an exclusive Central Waters beer that’s aged in barrels that once held brandy Old Fashioneds.

Clubhouse BFD
Rochester Hills, Michigan
clubhousebfd.com
It’s not easy choosing among 51 taps that cover local (tons of Griffin Claw, plus multiple offerings from Petoskey and Wolverine State), national and international brews, so it’s a good thing all the servers are Cicerone Certified Beer Servers and go through regular refreshers. Keep a special eye out for cellared gems drawn from the bar’s cooler as well as the occasional awesome vertical. When Griffin Claw Brewing expands into the space next door sometime this year, this little corner of Michigan will get even beerier.

Crescent Moon
Omaha, Nebraska
beercornerusa.com/crescentmoon
For 20 years, the alehouse has pioneered great draft beer through its 37 tap offerings, and it continues to champion both local breweries and new-to-the-area regional players like Avery, Surly, Bell’s and Firestone Walker. A new crawler machine has been a hit in the adjacent bottle shop, Beertopia, which stocks a dizzying 650-ish bottles and six drafts. Along with Max & Joe’s (the next-door Belgian-focused bar), the bars and bottle shop form Beer Corner USA, a moniker they’ve certainly earned.

El Bait Shop
Des Moines, Iowa
elbaitshop.com
The great thing about offering 185 draft beers—aside from the awesome selection, of course—is that you become the beer bar in Iowa, snagging one-off kegs that may not reach anywhere else in the state. (In its 10 years in business, this stalwart has reached 50,000 Untappd checkins.) Owners might add even more taps in the coming months, which sounds crazy, but as partner Jeff Bruning puts it, “We’ll stop when people stop coming in to drink with us.” Likely, that’s not any time soon.

Fountainhead
Chicago, Illinois
fountainheadchicago.com
Though it’s gone through some kitchen- and bar-side shuffles lately, the venerable beer and whiskey bar (with one of the greatest rooftops in Chicago) is back on sure footing. Gems from the extensive beer cellar as well as one-offs from visiting breweries surface for Friday events, and the rooftop bar has picked up fun brews from hometown favorites Spiteful and Pipeworks. The new chef, Sean Sanders, is a five-time recipient of Michelin’s Bib Gourmand designation.

Heorot
Muncie, Indiana
theheorotpub.com
This venerable 21-year-old bar’s finally come of legal drinking age, and owners celebrated with four more draft lines that bring its total to 71 options. The bar’s been remodeled as well, opening up the front area for more seating that’s still within the medieval, Beowulf-y theme (see: a dragon-festooned stone fireplace). Taps carry more local beer than ever (3 Floyds, 18th Street) as the Indiana brewing scene continues to bloom, rounded out by one-offs from larger Midwest breweries.

Hopleaf
Chicago, Illinois
hopleafbar.com
A much-needed expansion into the storefront adjoining the original bar area hasn’t changed the soul of this Belgian haven; a remarkable list of Belgian and American craft drafts and bottles served in proper glassware, plus charming vintage European beer advertisements that line the walls. Though it’s earned a world-class reputation, the bar still ingratiates itself to locals with literature readings, new-to-town beer launches and charity events.

Krug Park
Omaha, Nebraska
krugpark.com
A mounted, impressively antlered caribou head and Edison bulbs set the mood at the Benson neighborhood bar. An eclectic crowd decides among more than 60 draft beers, which often includes rare drafts from Nebraska and farther-flung breweries. The bar’s Beer Society—a $20 onetime fee that snags members 10 percent off draft beer and 12 percent off bottled beer for life—is a compelling incentive for return visits (as are the 13 Bloody Mary choices).

Local Option
Chicago, Illinois
localoptionbier.com
Its skull logo and punk aesthetic (“Employees must carve Slayer into forearms before returning to work” reads a sticker in the bathroom) are a bit out of step with its yuppie Lincoln Park ‘hood, but that’s just another quirk to love about this serious beer bar (another is the solid Cajun-leaning food menu). Thirty-one drafts pour about a half dozen of Local Option’s own beers, but other breweries’ lust-worthy one-offs and specialties land here with stunning regularity. The bar’s annual events read like a rare beer hunter’s Christmas list.

Map Room
Chicago, Illinois
maproom.com
It has a travelers’ theme, but the corner bar’s stools are full of regulars. They come not in search of food (nothing but pretzel rods here, but you can order in) or flashy decor (book shelves and flags are the only adornments), but for the 26 drafts and one cask that span venerable classics like Allagash White and St. Bernardus 12 to well-chosen pours from Central State Brewing, Three Floyds and Surly. Locals also know it’s an under-the-radar spot to grab a cup of Intelligentsia coffee beginning at 6:30 a.m.

Maria’s Packaged Goods & Community Bar
Chicago, Illinois
community-bar.com
The concept of a packaged beer store that’s also a bar finds its best expression at Maria’s, which has operated in the Bridgeport neighborhood since 1986. Matriarch and namesake Maria handed the bar and bottle shop to her sons in 2010, who then upped its quality beer focus and made it a destination for beer seekers in the know. This summer, Maria’s added a second bar, doubling its draft beer lines to 41; more Belgian offerings now round out the one off and barrel-aged rarities. (We’re also smitten by the draft cocktails and fernet on tap.)

Palm Tavern
Milwaukee, Wisconsin
(414) 744-0393
Twenty-five well-priced drafts and 100-plus bottles are made even sweeter by the intimate environs. Here, beer fans actually discuss what they’re drinking and share recommendations, though you could hardly find a dud on the lineup if you tried. A bonus for spirits fans, the bar also has an extensive selection of interesting bottles, and hosts regular classes on topics ranging from herbal liqueurs to cask-strength bourbons.

Republic
Minneapolis, Minnesota
republicmn.com
Throughout its five years in business, Republic has consistently proven itself ahead of the curve. One hundred taps feature the latest national breweries to hit the area (recently, Cascade, Funkwerks and Crooked Stave) and pour their choice of what’s best in the local market (Steel Toe, for one, and literally the only keg that non-distributing Modist Brewing let off their premises, for the bar’s anniversary party). Sixteen dedicated cider lines are well curated and change often, too. In a boon to travelers at Minneapolis’airport, Republic plans to open a location there this summer.

Romans’ Pub
Milwaukee, Wisconsin
romanspub.com
You’ll still find Mike Romans behind the bar of his tavern, 38 years after he purchased it. (When Romans decided to kick the hometown brewery off his tap handles, he was told he’d never make it in Milwaukee without Miller. That was 20 years ago.) The payoff of such longevity: vintage barrels from the bar’s cellar, which date back to 2009 and occasionally show up on the 33 draft lines. Grab a cigar from the bar’s humidor, if that’s your thing, and retire to the rear beer garden. 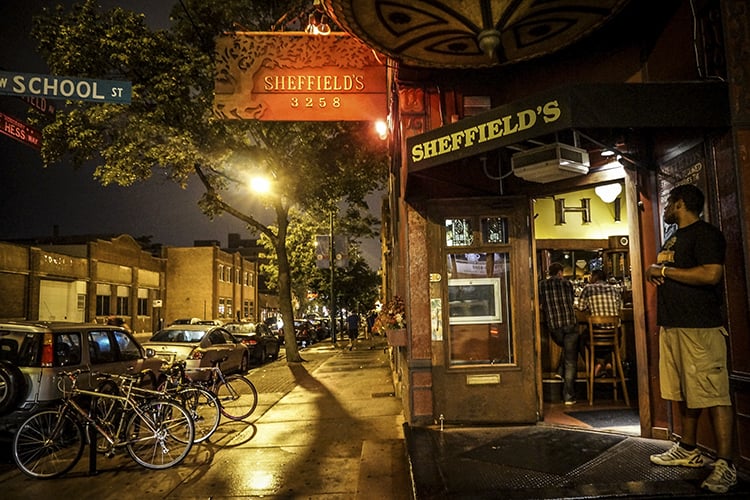 Sheffield’s, photo by Will Byington

Sheffield’s
Chicago, Illinois
sheffieldschicago.com
This iconic, 50-tap Lakeview bar is back on our list this year thanks to a reinvigorated beer and events program that’s recently included a launch party for Short’s Brewing’s Illinois arrival, a Founders KBS release and a Chicago Craft Beer Week event that included pours of Surly Darkness, Goose Island Proprietor’s Bourbon County Brand Stout and barrel-aged Ballast Point goodies. As always, picnic tables in the beer garden are some of the best summertime spots in town.

Sugar Maple
Milwaukee, Wisconsin
mysugarmaple.com
A great bar has a lived-in vibe that’s well beyond its years. Sugar Maple offers not only a “best of” lineup of Midwest and national breweries on its 60-deep draft list, but a friendly, been-here-forever presence that belies its mere eight years in the Bay View neighborhood. Eclectic events include everything from live music to monthly Sunday-night Brewery Series classes.

The Happy Gnome
St. Paul, Minnesota
thehappygnome.com
You’ll know you’ve arrived at the venerable neighborhood bar when you glance around its wood decked walls and notice a trove of gnome figurines. That, and the extensive (while still thoughtful) draft list, helpfully divided into broad categories like sessional brews, sour and funky, and “double hoppy” that represent a mix of local and national breweries. Choose from the 89 drafts, which your server can help you pair with dishes from the seasonal, beer-friendly food menu.

The Koelschip
Indianapolis, Indiana
(317) 414-9539
The team behind Indy’s Central State Brewing noticed a lot of great bars in town serving standard beer styles, but felt the city lacked a bar dedicated to interesting imports and “weirder” domestic beers. So this winter they opened Koelschip, a 12-tap, minimalist bar with permanent handles for four Central State beers and Ritterguts gose, plus seven rotating options that span hoppy, malty, dark and funky brews from the likes of Jolly Pumpkin and 18th Street. Pint glasses are only for water; all other beers are served in 16-, 12- or 10-ounce tulips.

The Mitten Bar
Ludington, Michigan
mittenbar.com
If you want to know what’s new and best in Michigan beer, you check out The Mitten Bar. The fiveyear- old bar’s all-in-state beer lineup champions both the big players (Bells, Founders) as well as the best of the new guard (Pigeon Hill, Austin Brothers, Starving Artist) across the dozen taps. Live music and tap takeovers with up-and-coming breweries are popular events, and some of the best ways to find out who’s going to be next on the scene.

DRAFT’s top 25 beers of the year