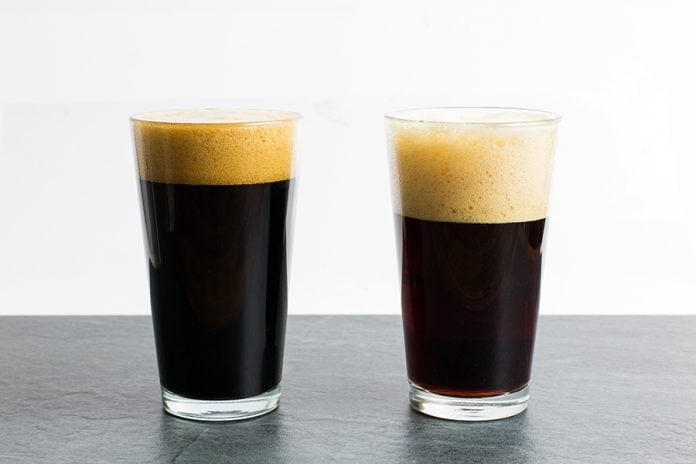 But seriously: What is the difference between stouts and porters? It’s a question we get from our readers several times a week. Their confusion is warranted: Both beer styles are dark; both have flavors and aromas of coffee, chocolate and toast; both seem to fall within the 5-7% alcohol range. And with brewers putting their own twists on each style, differentiating them has become a challenge; there’s a lot of overlap. But there are subtle differences between these styles, and to understand them, it helps to first understand their history.

We’ll start with porter. Though we know the style washed over London in the 1700s, becoming the city’s most popular beer style and playing an integral role in growing its greatest breweries, its true origins are as dark as black patent malt. The most enduring tale about its invention involves threads, butts, and a brewer named Ralph Harwood. It goes like this: In the 1720s, beer in pubs was usually served from casks, which were also known as “butts,” and the beer poured from these butts was known as a “thread.” A single mug of beer commonly contained several threads blended by the bartender at the point of sale; a popular order among the porters who frequented a particular pub, in fact, was known as “Three Threads.” The man in charge of the pub, tired of all this blending, allegedly hired Harwood to create a beer that would recreate the flavor of three threads, and Harwood obliged, calling his pre-fab blend “Entire.” The name, however, wouldn’t stick; the beer became so popular with London’s working porters that it would eventually be named after them.

That’s the story, anyway. Though Three Threads and other blended beers certainly existed, there’s little evidence that the particulars of Harwood’s Entire origin story are true. We don’t know much about how the porters of the day actually tasted, either; the flavors we associate with the style today—toast, coffee, chocolate, etc.—would have been impossible for brewers to achieve since reliable malt roasters wouldn’t be invented for another hundred years.

What is known, however, is that the stout style is porter’s direct descendant. In the 1700s, the word “stout” was used to refer to a bolder, higher-alcohol version of any beer style, much in the same way we use the word “imperial” today. Porter, as we mentioned, was the most popular beer of the day, and over time, “stout porter” became stout’s most common use. By the late 1800s, however, demand for regular porters had evaporated. Stout porter—shortened, simply, to stout—took its place.

So, judging from the history of these two styles, it would seem that stout should simply be a stronger, more intense version of porter. But more has changed between the 1800s and today than just our penchant for wearing top hats and big-butted dresses.

“Today, the true differences between the styles are constantly being debated,” says Bill Manley, brand manager at Sierra Nevada Brewing Co.’s facility in Mills River, North Carolina. “Many brewers market beers as either ‘stout’ or ‘porter’ based on their personal preferences and perspectives rather than a notable stylistic difference.”

Generally speaking, he says, porters will have less roasted character than stouts and typically will not be brewed with roasted barley (a type of dark, highly kilned barley that is not malted and thus imparts no sweetness to a beer). Sierra Nevada makes highly regarded versions of both styles; Manley says they differ in that the brewery’s Porter is drier and slightly lower in alcohol, while the Stout is a bit sweeter but also features roasted barley for a sharper malt flavor.

While malt flavors are the focus in both stouts and porters, beer’s other major flavor-contributing ingredients—hops and yeast—also can contribute subtle differences that allow us to differentiate between the styles. For its Great American Beer Festival and World Beer Cup Competitions, the Brewers Association maintains and regularly updates a list of beer style guidelines to both show brewers the flavors expected in a style and give the folks judging the beers a rubric for making their decisions. Both porter and stout are represented in the most recent edition of these guidelines; we’ve set the specifics of each style up side-by-side, for comparison.

The style guidelines produced by the Beer Judge Certification Program, meanwhile, actually contain short sections that compare the characteristics of similar styles. This section on the American Porter entry says the style is “less strong and assertive than American Stouts.” The American Stout entry, similarly, affirms that the stout is “stronger and more assertive, particularly in the dark malt/grain additions and hop character, than American Porter.”

So, to recap: Porters tend to be fruitier, sweeter and less bitter than stouts, with cocoa and caramel flavors in balance with dark malt bitterness; stouts are usually hoppier, drier, maltier and more coffee-forward, and may even have a touch of acidity.

But again, approaches by actual brewers vary—remember Bill Manley saying Sierra Nevada’s Stout was sweeter than the Porter above? With the most important factor determining whether a beer is dubbed porter or stout seeming to be what the brewer feels like calling it, we may just be splitting hairs in trying to determine dissimilarities. In the end, the difference between the two styles is clear as a stout. Or a porter. Whichever.

Beer Master - September 24, 2021 0
We saw these crafty bottle-cap candles scattered around the spread at a beer dinner and couldn’t resist attempting to make a stash for ourselves....