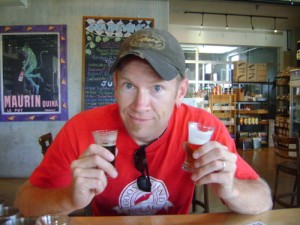 Could you last 46 days on doppelbocks alone? One beer blogger forgoes food during Lent in search of enlightenment.

Most of the Christian world woke up on Ash Wednesday with a newfound constitution to abstain from sweets, swearing or other small vices throughout the season of Lent. Brewvana beer blogger J. Wilson, on the other hand, is taking inspiration from the Trappist monks of Germany’s Paulaner Brewery. Like the monks 300 years ago, Wilson plans to fast throughout Lent, relying solely on doppelbocks as his only source of nutrition. For the experiment, Wilson teamed with Eric Sorensen, head brewer at Rock Bottom in Des Moines, Iowa, to brew Illuminator Doppelbock. For the next 46 days, under the supervision of a doctor and spiritual advisor, Wilson will drink only Illuminator and blog about the journey. We caught up with Wilson on day one to see if he’s up for the task.

Halfway through day one, how do you feel?

I’m doing pretty well. I was just commenting to my coworkers that I’m feeling a little hunger, but I’m the kind of person that doesn’t really eat much in the way of breakfast, and I often find myself skipping lunch, so today will be pretty normal until dinner.

What was your last proper meal?

Last night at Rock Bottom, at the crawfish boil [celebrating the release of Illuminator], but I’ll admit I had a few Reese’s Peanut Butter Cups on the drive home.

Since you’re at work right now, we feel compelled to ask what your co-workers think.

They know me, so they’re not surprised I’d come up with something like this. They’re all supportive, and they said they’re going to lay off the donuts for a while.

How on board is your doctor with the experiment?

He understands me as well, but he rolls his eyes about it. I’m generally a scrawny person, weighing in at about 140 pounds, and thought that would be an issue he’d bring up. His real concern is with operating a car. On a health front, he mentioned the possibility of an acid build up because of the grain, so I could get an ulcer. I also had blood work done, and they’re going to monitor my liver.

What’s your strategy for consumption? Are you just drinking Illuminator?

The plan is, initially, to drink four beers during the workday and five beers on the weekends. The beer we brewed is at 288 calories for a 12-ounce serving, so I will be working on a deficit. Beer geeks are not terribly monogamous, so I have to commit myself [to the one beer]. The monks just had the one variety, so that’s going to be one of the challenges: the boredom of one beer. But, Illuminator came out great, so I can drink this for 46 days. I brought home four six-barrel kegs.

Many might consider a beer-only diet ideal. Are you anticipating more pleasure or pain?

Getting drunk is not on the agenda. It’s not a cavalier action I’m taking, and it’s going to be difficult. To think I can go without food for 46 days without noticing is insane. There’s a real spiritual element I’m interested in exploring. I call myself a Christian, and denominations don’t mean anything to me. The bickering amongst denominations is just silly. The common denominator is Christ, and there are a lot of Christian beer drinkers out there. Beer drinkers have something to learn from Christians, and Christians have something to learn from the world of beer. There’s a deep correlation between the church and beer, especially in Europe.

Below: Wilson with his Illuminator co-creator, Rock Bottom’s Eric Sorensen 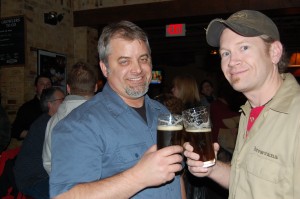 Will it fall? A look at America’s brewery boom