As beer editor, my desk’s always covered in bottles. Beers from around the world cycle through for panel tastings, and just when I make room for my laptop, more bottles arrive. Of course, I’m not complaining: There aren’t many jobs where you can crack open five saisons at noon and call it “work.” But, elbow room aside, that’s not to say it isn’t challenging, especially as the year comes to a close and I’m faced with picking the top 25 beers of 2012. Just 25?

To narrow it down, this time around we tweaked the rules: We focused only on bottled or canned beers that were released or made available for the first time in the United States this year. With the criteria set, we dug into our notes. We remembered some of the stunning new Belgian releases that arrived from Chimay, St-Feuillien and Westvleteren. We reminisced about the way Hangar 24 and Stone elevated the IPA with ingredients from the farm. And, most of all, we couldn’t forget the variety of exceptional farmhouse ales, from Cigar City’s Cucumber Saison to Ranger Creek’s smoke-infused Small Batch Series No. 2. It didn’t take long before a clear set of front-runners emerged, all defining the new look of craft beer.

Looking at this group as a whole, it’s evident that innovation is on equal footing with classic styles. Some releases reminded us that beer doesn’t have to be fancy to be awesome, while others weren’t just outside the box; they were nowhere near it. Brewers formed new partnerships that furthered the relationship between beer and the worlds of food and farms. Fruits, vegetables and specialty grains like oatmeal and rye reimagined old styles. Brewers perfected novel techniques, and found new ways to harness the power of wood aging and smoke. This list is about groundbreakers, and these are the top 25 new beers of 2012. -Christopher Staten 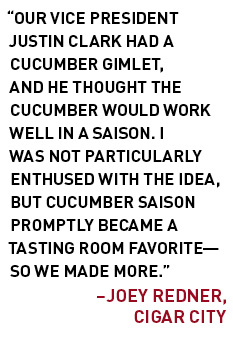 This cucumber-infused saison set a new standard for how revitalizing a vegetable beer can be. Just like the cucumber-spiked water you’d find in a spa lobby, this brew is invigorating, smudging subtle hints of veggie freshness onto a canvas of sharp pepper, brilliant lemon and juicy orange. It’s the
perfect vacation beer, whether you’re on a tropical island or in your own backyard.

Spéciale Cent Cinquante | Bières de Chimay | Belgian Golden Strong Ale
When a Trappist brewery releases its first new beer in 46 years, it’s bound to be good, but we weren’t prepared for the intensity of this beer. Crafted to celebrate the brewery’s 150th birthday, this hefty 10%-ABV golden strong marries classic Belgian flavors—think perky spice, playful pear and lemon, seductive doughy malts and a touch of sugar. Powerful yet elegantly balanced, it’s a charming expression of everything we love about Belgians.

The Velvet Fog | Sun King Brewing Co. | Belgian Dark Strong Ale
This 2012 World Beer Cup gold medalist floored us with its depth and rich, seductive flavors—not to mention the ingenuity of aging a dark strong ale in bourbon barrels. The result is this year’s most luscious beer: Chestnut, toasted coconut, pineapple and cherry flood the nose, while nuts, caramel, dark fruits and coconut slather the tongue with opulence. Have your mind blown when Velvet Fog arrives in Alumi-Tex bottles this winter.

Wookey Jack | Firestone Walker Brewing Co. | Specialty Beer
This black IPA delves deep into the world of dark grains without ever losing its composure. A thoughtfully smooth, chocolate and roasted malt base is the perfect stage for the hops’ juicy orange and tangerine, while the clever use of a black wheat malt and two types of rye elevates the swallow with a
playfully edgy, spicy kick. It’s big (8.3% ABV), it’s bitter (80 IBUs), and it’s the best black IPA we’ve had to date. 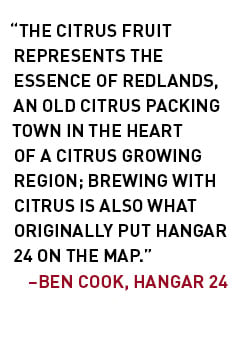 At the intersection of locavorism and craft beer is a wealth of fruit-infused brews, but none captured our imagination like Essence. Locally grown naval oranges, blood oranges and grapefruit empower the citrusy hops of this imperial IPA, creating an insanely fruity profile that’s softened by a thoughtfully creamy malt bill. From conception to execution, this beer’s simply perfect.

Bacon Maple Ale | Rogue Ales | Specialty Beer
It was the year’s most divisive beer, and we couldn’t get enough. The concept: recreate Portland, Ore.-based Voodoo Doughnut’s Bacon Maple Bar in a bright pink bottle. A staggering list of ingredients included seven malts (three of them smoked), bacon and pure maple flavoring, yielding a spot-on profile of doughy bread, molasses and smoky bacon—and the most decadent foodie beer of 2012.

Sunrise OPA | Fort George Brewery | Specialty Beer
As rye’s prominence skyrocketed, another grain, oatmeal, quietly found its way into everything from pilsners to saisons to pale ales. Sunrise OPA sets the standard for what will no doubt trend in 2013. Like the traditional oatmeal stout, a hefty dose of the grain lends a wonderful silky mouthfeel to this bold grapefruit-and-grass pale ale, framing the brilliant hop flavors on the tongue while cushioning the taste buds from aggressive bitterness. 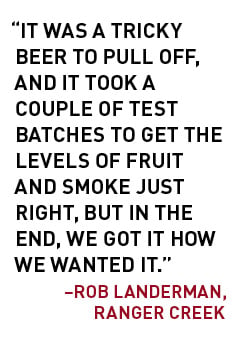 At its core, this saison nails the classic flavors of a farmhouse ale: Vibrant lemon, light pepper and dried hay transport the senses to Belgium, where the style was born. But it’s the beer’s spelt malt—smoked over Texas peach, apricot, apple and plum woods—that makes it truly pioneering, infusing the beer with deep, quiet smoke, gentle fruitiness and a sense of terroir that culminates in the most elegant smoked beer we sipped all year.

Brett Dream | Funkwerks | Saison
Saisons have quickly become the gold standard for measuring a U.S. brewery’s Belgian-style prowess, and few craft them as expertly as Funkwerks. But this year, the brewery took domestic saisons to a new level with the dynamic Brett Dream, a world-class example packed with bright lemon, black pepper and soft wheat laced with barnyard funk—easily the best balance of Brett and saison brightness we saw all year. 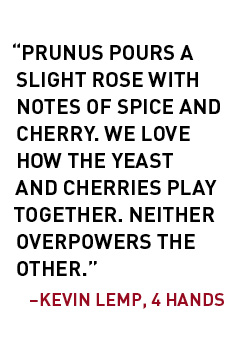 As powerful, enamel-erasing sours continue to trend, subtlety is just what the dentist ordered. This new St. Louis brewery delivered with its first (and our favorite) spring seasonal release, a saison brewed with sour cherries. This fluffy brew’s effortless fusion of gentle tart cherry with playful black pepper and clove was a revelation; delicate, refined and incredibly quaffable, Prunus is flawless.

X-1 | DuClaw Brewing Co. | Specialty Beer
It’s rare to find a beer that embodies so many trends, but a single bottle of X-1 manages to combine imperialization, single-hop, rye, chocolate, flaked oats and small-batch brewing. This imperial chocolate rye porter seems to take the kitchen sink approach, but the execution is masterful: X-1’s rich, dark malt flavors flood the palate, while its judicious use of spicy rye ensures each bold sip ends shockingly clean. Chewy and velvety, this is pure porter paradise, and easily the most malt-complex yet drinkable beer we sipped all year.

Lava | Ölvisholt Brugghús | Smoked Beer
Straight from a tiny farmhouse brewery in Iceland, the newly imported Lava does the land of volcanoes justice: Rustic birch smoke permeates this chewy beer’s roasted malts, rich chocolate, dark cherry and raisin, while a frisky 9.5% ABV lightly singes the back of the throat. Its complex depth and noticeable brawn make for a perfect snifter on a blustery winter night—absolutely fitting, considering its origin.

Alpha Session | Drake’s Brewing Co. | Specialty Beer
This year, we saw a swell of beers billed as session IPAs, but none delivered as much hop vibrancy for as little alcohol as the 3.8%-ABV Alpha Session, a beer the brewery calls a NorCal bitter. Bottled for the first time this year, Alpha Session’s staggering citrus-and-pine American hop character and unfathomably soft mouthfeel is the future of the session beer movement—and the perfect remedy for hopheads fatigued by high-gravity options. 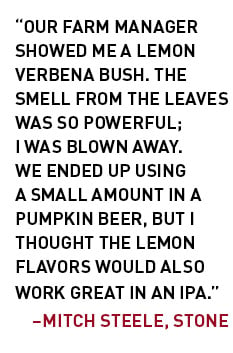 Stone unleashed a slew of hoppy brews this year—Ruination 10th Anniversary IPA, Bottleworks 13th Anniversary Ale and the potentially game-changing Enjoy By IPA—but it was the brewery’s 16th Anniversary IPA that left us speechless. An imperial IPA at heart, additions of lemon verbena, lemon oil and
a dash of rye malt created a ridiculously enjoyable, razor-sharp profile backed by the biggest, sunniest swell of lemon we’ve ever tasted in an IPA. This beer draws a new line for imperial IPA intensity.

Trappist Westvleteren 12 | Brouwerij Westvleteren | Belgian Dark Strong Ale
It’s no surprise that the momentary stateside availability of what’s been called the best beer in the world went down as one of the biggest beer stories of 2012. Rightfully so: Those lucky enough to score one of the limited-edition gift packs experienced the absolute epitome of Belgian dark strong ales in all its toasted bread and dark fruit glory. If you missed out, the only way you’ll score Westy 12 now is at the source in Belgium. 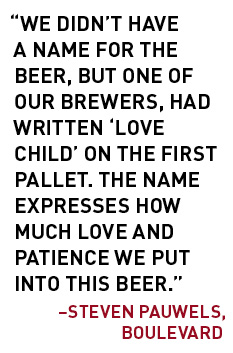 Brewed with Brettanomyces, Lactobacillus and aged in bourbon casks, Boulevard’s first wide-release wild ale is the most intensely sour beer we sipped this year. Big cherry and fierce sour swells roll back in waves; hints of bourbon and barnyard funk add incredible complexity. It took the brewery eight years of experimentation to get into the wild ale game, and its debut is a reflection of uncompromising effort.

Milk Stout Nitro | Left Hand Brewing Co. | Sweet Stout
The year began with Left Hand setting its sights on a certain ubiquitous Irish beer when it reimagined its classic Milk Stout by bottling it with a proprietary nitrogen system instead of the widget you find in other stouts. The brewery’s kept the science close to its vest, but we do know this: The ultravelvety version of the original mocha-and-chocolate-packed ale exceeds what we’ve always considered one of the best stouts in America.

Zwickel | Urban Chestnut Brewing Co. | Zwickelbier
Urban Chestnut’s zwickelbier brings the nearly forgotten German style (it predates the pilsner!) back to life with perfection. This 19th-century spin-off of the kellerbier reminds us just how charming a lager can be: Fluffy and bready with a snappy, grain-driven finish, Zwickel’s a premier example of honest, simple beer refreshment.

Plank II | Heavy Seas Beer | Wood-Aged Beer
Innovation is the heart of this wood-aged doppelbock: The brewery teamed with a local woodworker to age this historic German style on yellow poplar and eucalyptus planks that had been retified (a thermal process that fortifies wood and draws out more flavor character). Clean, slightly herbal wood notes flow through the base while woody dryness tempers the malt sweetness. The beer’s captivating, and the brewing process is game-changing.

19 | Mikkeller | American IPA
After releasing 19 single-hop beers, Danish brewer Mikkel Borg Bjergsø concluded his experiment with this batch that combined every hop in the line. The aptly named 19 is the most complex IPA we’ve sipped, and its careful blend of varietals neither overwhelms nor muddles the individual hop character, making each sip a sensory exploration.

Grand Cru | Brasserie St-Feuillien | Belgian Golden Strong Ale
This newly imported beauty earned an impressive 98 points from our panel, making it second in the style only to Duvel’s perfect score in 2009. Incredibly engaging, Grand Cru explodes in the mouth with sweet grains, candied lemon peel and a dose of earthy white pepper, while its sneaky 9.5% ABV is so masterfully hidden, we didn’t believe it when we read the label. Simply put, Grand Cru is as stimulating as beer gets.

Beer Master - September 27, 2021 0
Flickr photo by Chris Elt Nearly 35 months ago, I decided I was going to run at least one mile and drink at least one...