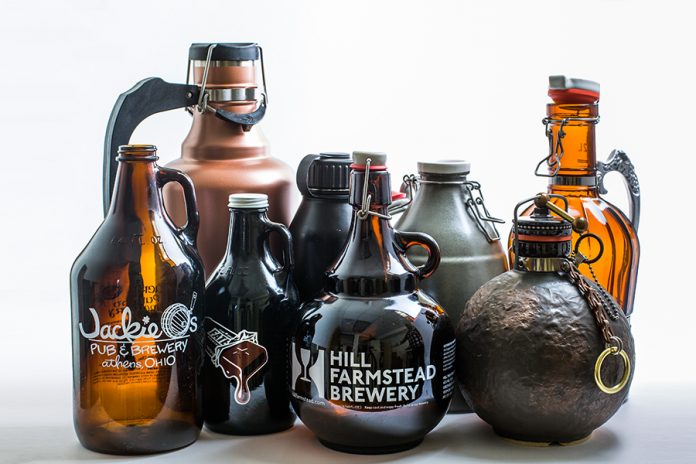 This is my growler collection. Impressive, isn’t it? Such a varied array of ceramic, metal and glass, gathered through giveaways, birthday gifts and visits to breweries across the country. It’s been years in the making.

And today, it’s going in the trash.

It’s not that growlers are a terrible way to package and drink beer (though they are, and we’ll get to that). I’m giving up on growlers because, more and more, I don’t need them. Brewers are beginning to realize that there are better ways of getting beer to me.

Take Night Shift Brewing in Everett, Massachusetts. The brewery has been steadily working to slow its growler sales over the past year by shifting more of its offerings into cans and offering refunds on the $5 deposit customers drop to purchase the glass jugs. In December, an email newsletter sent to fans decreed that growlers were officially dead.

“As we’ve grown, our capacity to can and bottle our beer has greatly increased,” the newsletter said. “Growlers are convenient, but our QA team’s tests confirmed that cans and bottles preserve freshness best. In our endless quest to serve a world class product, we decided to focus on the best take-home formats.”

It was a bold move. Night Shift had been selling growlers since the day the brewery opened, and their sales had been a major contributor to the brewery’s early success, says Night Shift brewer and co-founder Rob Burns. But, he says, the containers presented just as many issues. Bartenders were spending inordinate amounts of time cleaning and filling them—and pouring kegs’ worth of beer down the drain while doing so. Customers would often bring in growlers with chips in the glass, improper seals or other imperfections that led the beer inside to go flat before they even made it back home. And many of the people who purchased growlers seemed to misunderstand their purpose entirely: Burns says he would often see negative ratings pop up online for growlers sold months earlier.

“We just felt growlers hurt our beer and hurt the experience of the customer,” he says.

Most drinkers didn’t seem to mind too much: Night Shift has seen about 20 or 30 growlers returned each week since sending out the newsletter, and sales of to-go beer haven’t dropped much. Still, Burns says, the reaction to nixing growlers has been mixed.

“I think a lot of people who are into growlers have this perception that growlers are the freshest beer possible,” Burns says. “They were wary of getting beers in cans because they thought the growlered stuff was fresher. We were totally unprepared for that response. It didn’t even cross our mind that they thought growlered beer was better.”

Over in Illinois, debate has recently raged over whether beer retailers should be legally allowed to sell and fill growlers (current law says only breweries have this privilege). The misconceptions surrounding growlers are a major reason that Chris Quinn, owner of beloved Chicago bottle shop The Beer Temple, has actually argued against growlers in stores.

“A growler is just a big glass, essentially, and I don’t think drinkers know that,” Quinn says. “Brewers can put a tag on the glass saying ‘drink within 48 hours’ and so on, which I think is good, but I think that people still consider growlers to be as good as bottles—and maybe even better, since they got them right from the source. But if you think there’s no difference, open up five bottles or cans of a beer, put them in your fridge, and just drink through them one by one. That’s essentially what you’re doing with a growler. Is that fifth beer going to be as good as the first, even if it’s kept in a fridge?”

Breweries spend thousands—sometimes millions—of dollars on their packaging lines in an attempt to keep oxygen levels low and keep their beers as fresh as possible for as long as possible, Quinn says. For bar and bottle shop owners to essentially pour from a tap into a big glass, screw on a cap and call it good is counterintuitive to what brewers are trying to accomplish.

Quinn recalls a discussion he had on the topic with Lagunitas Brewing Co. owner Tony Magee: “He said, ‘I don’t like growlers. We spent $2 million on our bottling line and it cost that much for a reason.’ Well, yeah, but you sell growlers out of your taproom. He said, ‘That’s true, but I look at it more as a keepsake, a memento for someone’s visit, rather than a viable way for me to sell my beer.’”

Meanwhile, some new breweries are opening without even considering growlers as a packaging option. Sean Buchan, owner and head brewer at Cerebral Brewing in Denver, Colorado, says he was initially against them due to the amount of oxygen that hits the beer when growlers are filled. Plus:

“They pile up at your house,” Buchan says. “Whenever I would go to a bar, I’d always forget to bring one, so I’d end up buying another, and you don’t really want to throw any of them away or recycle them because you paid $5 or $10 for the growler itself.” [With this point I wholeheartedly concur, as I never set out to build my collection of growlers; it was mostly amassed through forgetfulness. Each of the growlers in that photo has been used precisely once.]

“We also didn’t want to make our staff wash people’s growlers,” Buchan says. “That’s not a good use of their time, especially on a busy night. And we also didn’t want a growler going out that someone opens at a party and the beer ends up sucking because it wasn’t properly cleaned or filled.”

Cerebral doesn’t sell growlers and won’t fill those brought in by customers. (“The people who tend to get the most upset are the ones who spent a lot of money on their growlers or have a custom one,” Buchan says.) Instead, the young brewery invested in a Crowler machine, the modified soup canner used for bartop beer canning developed by fellow Colorado brewery Oskar Blues. Oskar Blues has sold nearly 1,000 of the devices—and more than a million 32-ounce cans—since 2014.

Even large companies seem to sense the growler’s reign is ending. The Kroger grocery chain, for instance, is testing Crowlers at one of its locations in Memphis, Tennessee.

All of which has led me to decide to dump my growler collection. A growler isn’t a bottle; it’s a glorified pint glass, and while Crowlers aren’t perfect, they’re a far better option. Here’s the best option, though: going to a brewery and enjoying a pint or two, in the place the beer was made, exactly as the brewer intended. If the beer’s really that damn good, you can always come back tomorrow.

Are IBUs misleading when it comes to dry-hopped beers?

Beer Master - September 25, 2021 0
Some brewers have called for a swift death to IBUs, or international bittering units, as a data point for consumers. Critics say IBUs are a poor measure of...

Small brewers say Anheuser-Busch is squeezing them out of the South...