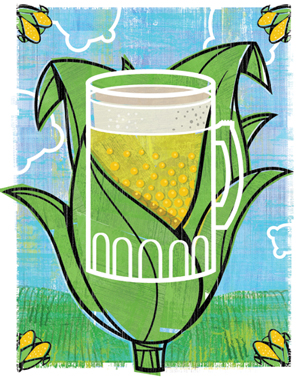 Popular myth blames the Europeans for bringing alcohol to the New World. That may be fair where spirits are concerned, but large swaths of the Americas were home to civilizations that co-evolved with fermented drinks. As with barley and wheat, maize was a grass tamed and nurtured over generations to become something more nutritious—and more fermentable.

Chicha, in all its incarnations, ranged from the Andes up to what is now the southwestern United States. The Apache made a traditional corn beer, the prohibition of which was one of Geronimo’s reasons for rebelling against the resettlement regime in the 1880s. Recent archaeological evidence suggests that some Pueblo tribes of modern-day New Mexico, long thought to be teetotalers, were making their own fermented corn drink about 800 years ago. So, arguably, chicha is the original American beer.

There are numerous versions still made in Latin America including some made with cassava (a South American shrub), rice and fruit. Yet chicha owes much of its fame to the image of ancient Andean women chewing the corn jora before tossing it in the brewpot.

What follows is a simple, light-bodied version similar to what is found in some Central American kitchens, adapted from a Costa Rican family recipe. Here the corn adds flavor, while unrefined sugar provides the fermentables. -Joe Stange

2 pounds unrefined sugar, such as tapa de dulce or piloncillo

In a food processor or mill, coarsely chop the corn. Transfer the corn to a large stockpot and add the water; bring to a boil over medium heat and add the sugar, stirring to dissolve. Cook on a low boil for 30 minutes, then cover and chill to room temperature by setting the pot in an ice water bath. Pour the corn mixture through a strainer or cheesecloth into a large bowl or container; add the ginger and lime zest, and stir. Cover with a cloth and set aside to ferment 1 to 3 days or longer, depending on taste.

3 WAYS TO PLAY AROUND

1. Even those who dislike spices in beer may find chicha bland without them. Other possibilities include cinnamon, coriander, berries and jalapeños. Trust your creativity and the season.

2. Beer or bread yeast added after chilling can provide a quicker fermentation and a cleaner, drier drink. Adding spices at the end of the boil and covering a sanitized vessel with clean aluminum foil are other ways to make a more sanitary (if less interesting) chicha.

3. For a more authentic chicha de muko, hang the shucked corn ears out to dry for a few days, then remove the kernels. Grind the corn with a Corona or other mill to produce a coarse flour. In manageable amounts, chew and moisten the corn with saliva, and form it into small cakes. Dry them in the sun before throwing them in the brewpot.

Beer Master - September 25, 2021 0
Before there was Michael Jackson, there was Bob Abel. Let me explain that. I don’t mean to say that Abel existed first, although he did. I mean...