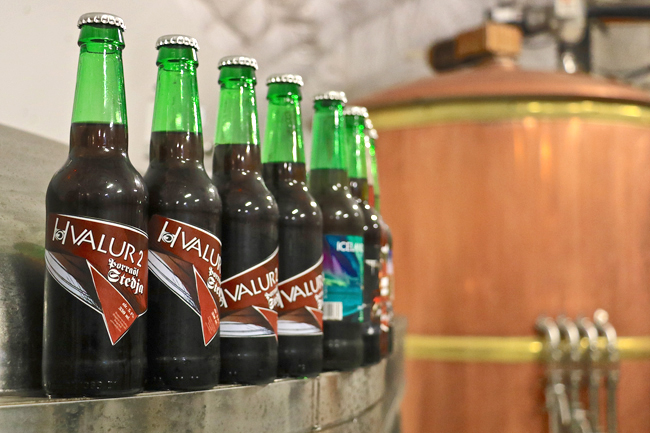 Fin whale testicles may not seem like a natural ingredient for, well, anything. But Dagbjartur Arilíusson, owner of the Steðji microbrewery in Iceland, disagrees: Whale testicles—actually, whale testicles smoked with sheep dung—are the signature ingredient in his seasonal beer, Hvalur 2. It’s all part of the brewery’s passion for ingredients unique to its far corner of the world.

(DRAFT) How did you come to own a brewery on a farm in the Icelandic countryside?
(Arilíusson) We started in 2012 because we own this farm in Borgarfjörður [West Iceland] and we wanted to have a job near us at home. We were thinking outside the box. Beer is a passion, and German beer making inspires me, so we connected with a German brewer in Iceland because we were interested in the German purity laws.

What’s special about the beers you brew?

We have four kinds of beer—dark, lager, ale and strawberry fruit beer. We also have seasonal beers like our Christmas beer that uses raw licorice as an ingredient, our October beer that includes red barley and pumpkin seeds, and our Easter beer that is brewed with cocoa and Icelandic seaweed. The theme is always to include something Icelandic.

You also brew beer made from fin whale testicles…

We started last year with our first whale beer, Hvalur 1. The health department didn’t want us to produce it at first, but we were allowed to. The beer used whale meal as an ingredient, and it was something new for Iceland. It sold out almost immediately. This year, for Hvalur 2, we wanted to keep the concept, but use a different whale ingredient. We decided to use fin whale testicles.

How, exactly, do you brew with whale testicles?

We get the testicles frozen from the whaling company, and we have a licensed butcher chop it up for us to use. The testicles are cured according to an old Icelandic tradition. The testicles are salted, and then smoked with sheep dung. A whole testicle is used in every brewing cycle, and then the beer is filtered and pasteurized. We put a lot of effort into this, and it’s a long process.

We wanted to create a true Thorrablot atmosphere that celebrates traditional Icelandic food. Every winter, Icelanders gather to eat traditional food that sustained our ancestors for generations. This is very popular here in the countryside, and we wanted the beer to be released at the same time of the festival. The dishes we eat include boiled sheep heads, liver sausage, ram testicles, fermented shark, wind-dried fish, smoked lamb meat, and blood pudding. We thought that Hvalur 2 would fit in well with Thorrablot by using an ingredient that is a little different.

Does the criticism from whale conservationists bother you?

It actually brings more attention to the beer, which is a positive thing. Most of the protests come from people outside of Iceland. People have to remember that the fin whale is not endangered in the North Atlantic, and Iceland is known for sustainable fishing and setting quotas for our whale hunt. There’s actually a lot of demand for our beer to be exported, but there are laws that limit which countries can import it because of anti-whaling laws. The beer will sell out in Iceland, and people from other countries want a taste.

Any new beers on deck?

We’re always thinking of how to use different Icelandic ingredients in our beer. It started with beers that use Icelandic seaweed and whale ingredients, and we’re thinking about other ideas like including Icelandic moss in a beer; we’re experimenting right now with an ale that has a lemon flavor.