Let’s start with the word itself. Kveik (say it like “kwike”) means “yeast” in a particular Norwegian dialect. Appropriately, the word mainly refers today to yeast that has been reused for generations in the farmhouse brewing traditions of Norway, passed down from family member to family member and neighbor to neighbor. In the areas in which it’s still used, it’s remained largely unchanged by the development of new, controlled yeast strains and modern brewing technologies, and over the centuries has developed some peculiar properties that have made it of great interest to American brewers.

To understand what makes kveik different, it helps to first understand how beer was made way back when. Today, brewers will most often use a single yeast strain to ferment their beers, which allows them to control precisely the flavors and aromas the yeast create. But systems for the separation and preservation of pure yeast strains didn’t exist until the late 1800s. Before that, brewers fermented their products with clumps of yeast that likely contained several different yeast strains, and would store and reuse the yeast from batch to batch. Storage methods varied: Some brewers kept their yeast in bottles; others might allow the yeast to dry on wooden rings or logs, on linen, or on some other material to which the yeast could cling and remain safe until it was again time to brew, at which point it would be dipped into the wort and spring back to life.

Over time, the use of pure, laboratory-created yeast gradually replaced these methods. But some brewers never changed their ways, choosing instead to continue brewing with their old, yeast-covered linens and wooden rings. These were the bearers of kveik, and though they did update their yeast-preservation methods over the years, the practice of saving and reusing the same yeast strain and passing it down through generations endured.

Much of what we know about kveik is thanks to Lars Marius Garshol, a farmhouse ale fanatic who tirelessly researches nearly forgotten brewing traditions and shares his discoveries on his excellently named Larsblog. More work is being done to understand kveik every day, he says, but fitting kveik into the larger family tree of brewing yeasts that we know and understand is work some researchers still hope to accomplish.

“We know very little about [kveik’s] ancestors just yet,” Garshol says. “Richard Preiss did the best phylogenetic analysis on it yet [producing a family tree] and he found that the kveik really gathered in one group, with other known lab yeasts in a separate group. Unfortunately, we don’t really know a lot more than that yet.”

What we do know, however, is that the known strains of kveik have a few traits that separate them from your average yeast:

Recently, some American yeast labs have begun to propagate and sell kveik strains, and American brewers, ever the experimenters, have begun playing with it. One of these enterprising ale-makers is Weedy Weidenthal, head brewer at Tombstone Brewing Co. in Tombstone, Arizona, who decided to utilize the bold citrus peel esters produced by the kveik strain he purchased to make a “Norwegian Farmhouse IPA.”

“Before dry-hopping it, it was this huge lime aroma,” Weidenthal says. “I was going to use Cascade and Lemondrop hops, but I smelled so much lime character from the yeast I ended up swapping out the Lemondrop for Citra because I didn’t want to go overboard on the citrus character.” 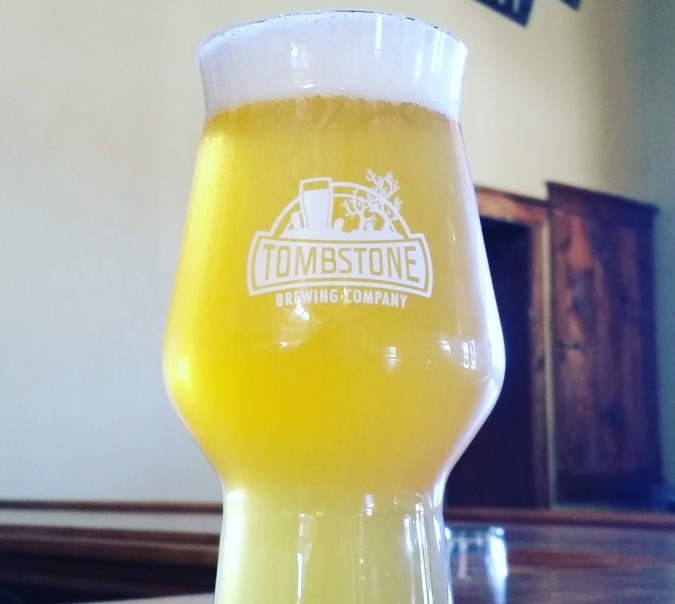 I had the chance to taste this one, and he made the right choice: the nose displayed tons of lime zest and a grassy-citrus character somewhat like yuzu, but melded with crisp pear and a hint of pineapple. It was recognizably farmhousey, but woven with the hops so smoothly you might miss it. What was more remarkable was the clean finish—Weidenthal says the yeast chomped through every bit of the sugar in the wort, which resulted in a very dry finish and a thin body that made the 6.5% ABV beer drink like something half its strength. Often in “Belgian” or “Farmhouse” IPAs, the peppery phenols of yeast amplify the hop bite and chew the tongue; by contributing a soft fruit character and then getting the hell out of the way, the kveik seemed to succeed where other Belgian yeasts in an IPA had failed.

Weidenthal says he plans to brew at least four more beers with the kveik he has, including a dry-hopped gose and an American strong ale. “I think this yeast is a good candidate for something that will ferment up to 15 or 16 percent ABV,” he says.

“We were absolutely blown away by it,” Gregorash says. “Not only the esters coming out on day one, day two of fermentation, but also flocculation. It drops out so quickly. You can turn beers over really quickly with it. Plus, the head retention on that beer is absolutely astounding. I mean, it follows the beer all the way to the bottom of the glass.”

Next was Hondo, a session wheat beer with additions of lemongrass, lime zest and pink peppercorns, then Apricot Dude Ranch, a pale ale with apricots. With each subsequent brew, Gregorash envisioned other brews that he—and his fellow brewers—could make with kveik.

“I think it’s gonna be a big deal for yeast,” he says. “For pale ales, everybody uses the Chico strain that Sierra Nevada uses or the New England strain that’s popular for cloudy beers. I think this strain is going to follow that pattern, where people become really interested in the flavors it’s producing and demand more beers made with it.”

Garshol admits that he can see a future in which kveik is part of the portfolio of most serious yeast labs, in the same way British, Belgian and American strains are catalogued now.

But, I ask, would factory-level production and distribution of kveik contradict the small-batch farmhouse traditions that made it unique?

“I think once you find something really obscure and mysterious like this, and explore all its secrets and make it commercially available, that kind of does remove some of the aura of legend from it,” Garshol replies. “However, these yeasts really had one foot in the grave. In most parts of Norway they were literally dying out, and some were saved in the nick of time, or even brought back from a point where it seemed like they were dead forever. So in a sense we don’t have much choice. If we want to preserve these yeasts we have to make sure they are used, and if that means commercializing them, so be it.”

To drive his point home, Garshol shared the story of Jens Aage Øvrebust, a Norwegian native who’s sent Garshol three kveik cultures from different farms in his village in Stordal. Garshol asked Øvrebust, as he does every brewer who shares kveik, whether he would be okay with someone selling his yeast. Øvrebust’s answer? “It’s high time that someone takes a serious look at what we old-timers have been doing before it’s too late.” Put another way: If you don’t share it and people don’t start using it, it’s going to die off. And that would be an end so tragic that really the only thing that matters is passing it down—this time to slightly larger generation of brewers—before it’s too late.

Beer Master - September 27, 2021 0
Depending on your preference for pumpkin beers, this news is either a bummer or a blessing: Some brewers this year are struggling to source pumpkin puree...