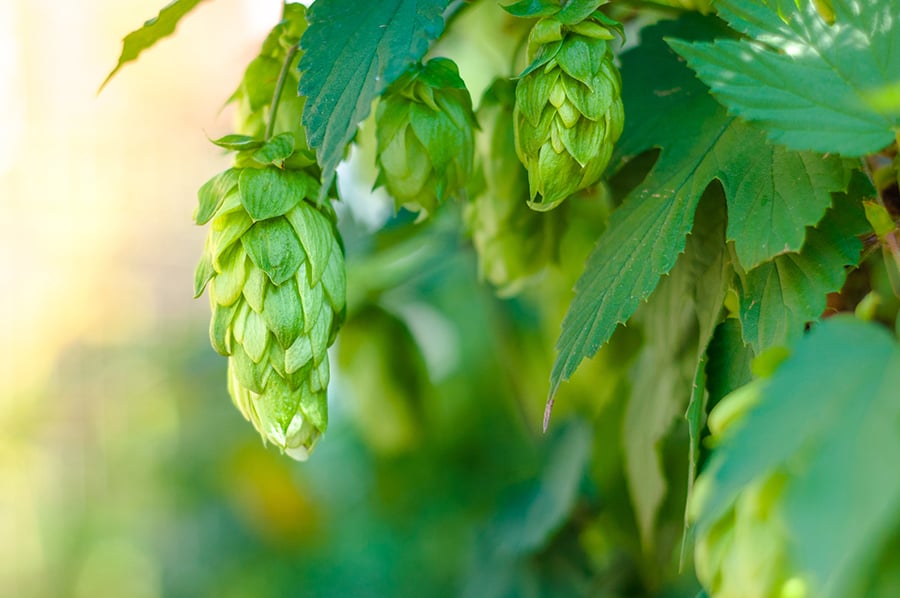 Harvest season is the time of year when many brewers have just one thing on their mind: hops. The lucky ones get to travel to the farms themselves for the contemporary ritual of hop rubbing and sniffing and tasting. The goal is to return, lupulin dust-covered, with some exciting, high-quality hops with which to experiment and brew. Fall is just the right time to check in with brewers about what new hops they’ve used recently and which they look forward to testing out in the future. Here are a few of the less-familiar varieties we’ve seen more of lately.

Jaryllo
Origin: United States
What the brewer says: “It’s supposed to give notes of pear and banana. I personally pick up a lot of floral and apple (maybe apple plus flowers equals pear? I don’t know) and banana, almost to the point of being hefeweizen-ish, which lends itself to a really nice refreshing American pale ale,” says Mystery Brewing’s Erik Lars Myers. “It’s a beer that’s really designed to be a balance between the malt and the hops and in this case they compliment each other well.”
Where we’ve spotted it: Mystery The Golden Hind rotating hop pale ale, batch #791

Callista
Origin: Germany
What the brewer says: “Anton Lutz, the breeder of this hop who’s in the Hull-Hallertau area in Germany, is working on a bunch of new hops. It’s the same program that was responsible for Hull Melon and Hallertau Blanc and Mandarina Bavaria,” says Firestone Walker’s Matt Brynildson. “Callista has come after that wave; it’s got really cool peach notes and is kind of refined in the way that only German hops can be. I’m really excited about this hop and that they’re actually growing quite a bit of it.”
Where we’ll see it: Potentially in Firestone Walker small-batch releases in 2018

Grüngeist™
Origin: United States
What the brewer says: “We wanted to offer a crisp, clean beer with the fresh, juicy flavor and aroma profile everyone loves,” says Genesee’s Dean Jones. “The guys from Hop Head Farms said they had a really interesting hop that they named Grüngeist. The specific attributes they said it had were peach and lemon with equally balanced passionfruit and floral. To me it needed that background of a little caramel malt that you’d find in a pale ale to round it out and make it a drinker, an almost sessionable pale ale.”
Where we’ve spotted it: Genesee Brew House Grungeist Pale Ale
Note: Grüngeist is a trademarked name for Hop Head Farms-grown Callista (see above)

Loral
Origin: United States
What the brewer says: “Loral was one of the hops we tried and liked at Craft Brewers Conference in 2016 so we bought some. We used it as a single hop in a beer called Sonic Bloom and it was good. I think what we’ve found is it’s a killer hop to blend with,” says Brew Gentlemen’s Matt Katase. “It’s got this ‘just right’ characteristic about it. Earthy, but not too earthy. Fruity, but not too fruity. Citrusy, but not too citrusy. Balanced and incredibly pleasant. While it was good on its own, we’ve really liked it as complimentary hop.”
Where we’ve spotted it: Brew Gentlemen Sonic Bloom; Reuben’s Brews Loral Crush IPA; Pike Wolf in the Woods pale ale

HBC 472
Origin: United States
What the brewer says: “This is an experimental one that’s new out there. It is the weirdest hop probably that we’ve ever experienced,” says Brynildson. “We tasted a couple of beers made with it while we were out here [in Yakima, Washington]; Bale Breaker made a cool beer with it. It smells like bourbon and coconut and almost makes the beer taste like it was barrel-aged. That’s one that all the brewers are buzzing about but also scratching their heads over.”
Where we’ll see it: Potentially in Firestone Walker pilot batch beers from the Venice, California, Propagator brewpub; upcoming darker beer styles from Bale Breaker

Enigma
Origin: Australia
What the brewer says: “Enigma formal tasting sessions have given interesting terms like pinot gris, raspberries and red currant, through to rock melon and light tropical fruit,” says Finback’s Kevin Stafford. “Enigma’s great fun to play with, a bit of a chameleon. Different aspects of her enigmatic character shine, depending on how you use her. Dry hop or add her late in the brew to maximize her flavor and aroma potential.”
Where we’ll see it: Upcoming Finback beers

XJA2/436
Origin: South Africa
What the brewer says: “Candied papaya stuck out, so we used those hops and fruited the beer with Hawaiian papaya puree. It had a pleasant pepperiness to it as well that tasted and smelled very reminiscent of a finished properly brewed wit, like that coriander, Belgian aromatics type of thing,” says Hop Butcher for the World’s Jeremiah Zimmer. “As the beer matured in cans, the papaya continued to shine brighter. Really great stuff.”
Where we’ve spotted it: Hop Butcher for the World’s Smoke-Filled Room IPA; Cerebral Brewing Letters & Numbers: XJA2/436 IPA

Pekko
Origin: United States
What the brewer says: “We have been doing trials for years and it’s been fun to brew our Stone Hop Revolver IPA series, which allows us to share our innovation process with our fans. Pekko is a hop we have designated for this series next year. … There are definitely the citrus and floral attributes that are commonly discussed but we also get a lot of red candy, especially cherry (and some strawberry), from this hop as well. This combo makes it really cool and unique,” says Stone Brewing’s Jeremy Moynier. “We highlighted Pekko along with Mosaic this year in our Stone 21st Anniversary Hail to the Hop Thief Double IPA. Pekko really jumps out in this beer and gets propped up by the layers of different aromas and flavors of Mosaic.”

Beer Master - September 25, 2021 0
I’m all for questioning conventional wisdom. Yes, IPAs have been a hot beer style for years, but I’d begun to wonder if, by now,...