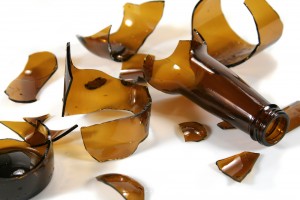 Collecting beer’s a pretty benign hobby, right? There’s little physical work, aside from the lift-glass-to-mouth stuff. No dexterity involved, unlike, say, model train assembly; no heavy lifting like that of classic car rebuilding; and none of the life-threatening risk inherent in heli-skiing. Chances are, beer cellaring won’t kill you.

But there is one hazard that plagues us. You never know when this danger is going to strike, and you never know how much damage it’ll cause. The threat: exploding beers.

As you might imagine, we get a lot of beer here at DRAFT’s editorial HQ—hundreds of bottles that the FedEx guy just drops onto the floor (OK, not drops; “sets.” We love our FedEx guy!) Still, the point is that all that beer gets jostled around, and sometimes, bottles explode. But usually, it’s the sleepers that tend to pop: We’ll bring a beer out that’s been sitting in a cabinet for a year and—POP!—there it goes.

We’ve had several pretty bad explosions. (Well, are there any GOOD beer explosions? Guess not.) Some are just messy: Last month, we had a bottle sitting on top of our office refrigerator (don’t ask why there are beers on top of our refrigerator) that felt it needed to spontaneously combust. Nobody was in the immediate vicinity, and the bottle broke in big chunks—but man, 12 ounces of beer never took so long to clean up. Others are downright scary: Two days ago, a bomber sitting on the desk of yours truly exploded in a shower of glass and IPA, the neck of the bottle narrowly missing my own neck and another thick shard flying past my right ear. The suddenly brown stack of papers on my desk has some choice words for that bottle.

The thing is, if you’re dealing with large volumes of beer—as many of you are in your own cellars—you’re inevitably going to get a popper. A bottle rocket. A pale ale gone pyrotechnic. A ballistic Belgian. It’s just life as a beer collector. Cellar rat problems.

Generally, bottles explode due to pressure caused by overcarbonation. If a beer’s bottled before fermentation is complete, or if a beer is bottle-conditioned, that means there’s fermentation happening in the bottle, and the resulting carbon dioxide can build up enough to break glass. Some infections can ferment beer, too, so a bacterial stowaway is usually an explosion suspect as well. We’ve read that if you suspect a beer to be overcarbonated, you can uncap it a bit, let some air out, then re-cap…but that just doesn’t seem right to do to a cellared beer.

But then again, we do do want to protect our collection. Exploding beers often hurt the beers around them, soaking labels or outright cracking other beers. Then, of course, there’s the very real damage they can cause to beer collectors. Should we all start wearing goggles when we enter the cellar?

We want to know: How do you avoid bottle-bomb damage? Do you arrange your cellar in a particular way to protect certain beers? Or do you just accept that it’s going to happen, and cross your fingers you and your precious collection escape unscathed? And if you have any photos of major beer explosions, send them to cellar@draftmag.com.

Beer Master - September 25, 2021 0
IN THE LAST FEW YEARS, WE’VE WITNESSED AN EXPLOSION of new beer styles. Where sours were once obscure, today American wild ales and their...