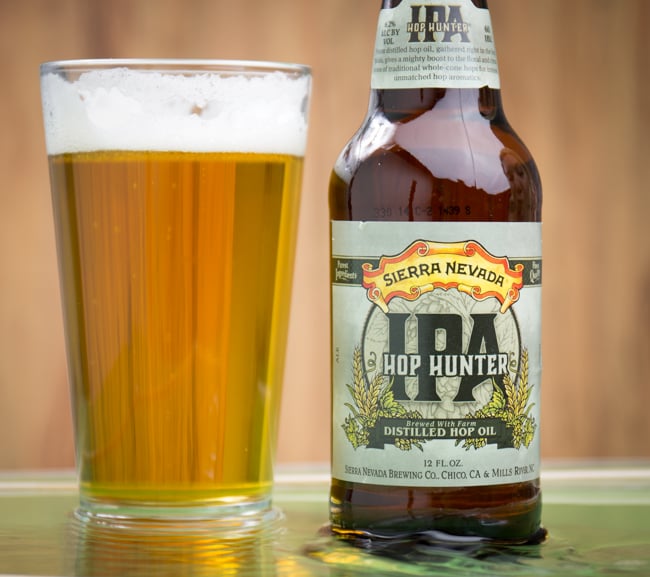 So what are we to make of  estimable Sierra Nevada’s Hop Hunter, an IPA that debuted earlier this year and touts its “farm-distilled hop oil?” I asked Tom Nielsen, the brewery’s hop guru and scientist who helped develop the new hop-extracting process  (technically, he’s the manager of raw material development and quality). He explained that his technique allows the brewery to procure hop oil right at the source, the hop farms, rather than in the brewery. I pictured steam tanks, similar to ones found in a distillery, nestled under lush bines; turns out, I should have been picturing a trailer.

In a nutshell: The brewery retrofitted machinery that was previously used to extract oil from mint plants (a mint farm abuts the land where Sierra Nevada’s hops are grown). Several trailers store the fresh-picked hop cones that have been separated from their leaves and stems. In a normal process, the hops are then kilned, or dried from about 75% moisture down to 10% moisture. Nielsen says a lot of flavor is lost in that kilning process, so instead, these huge trailers are designed to steam the whole hops, collect the vapor, cool and distill it, then separate the pure hop oil from the water.

Just how condensed is this hop oil? Five thousand pounds of fresh hops go into each trailer, and the entire oil yield for the project was 100 liters. Nielsen says Sierra Nevada plans to produce more this year, maybe near 250 liters, to meet demand for Hop Hunter. According to Nielsen, this distilled hop oil is the easiest way to achieve the full spectrum of hop flavor: “It’s a very direct way to get at the hop flavor that exists in the field. Even with those wet hops, they start to compost after 24 to 48 hours and you’re losing that flavor. And if you’re drying the hops, you’re changing that flavor. Our process of distillation also changes that flavor just a little bit, because the steam is cooking the hops a bit like if you’re steaming vegetables, but it’s a very clean way to do it.”

Our verdict? When we tasted Hop Hunter (prior to chatting with Nielsen), we noted distinctly oily, herbal hops that did taste like sticky, fresh pine needles with a kick of black tea bitterness. If you prefer your IPAs on the resinous rather side of the hop flavor spectrum, this is a six-pack worth picking up.

Beer Master - September 27, 2021 0
As much as we love gazing into our crystal balls and divining what happened in the beer world in 2016, data provide the best frame...

The case against IBUs