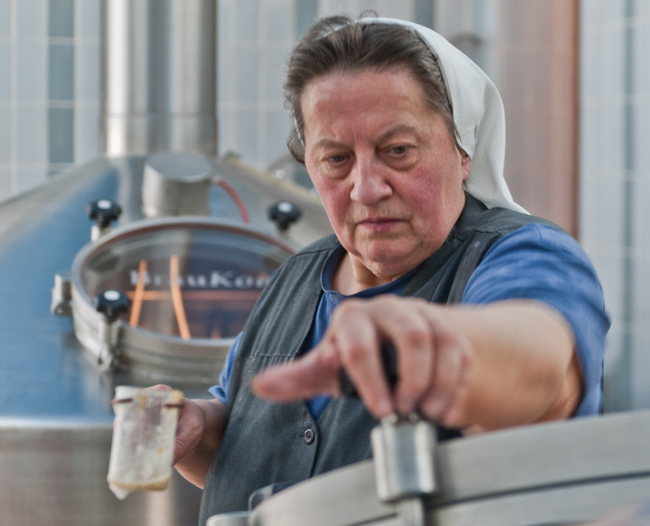 Mallersdorf-Pfaffenberg is a municipality of Bavaria in southern Germany with a population of about 7,000. It is also the site of the Mallersdorf Abbey, where beer was first produced in the 12th century by Benedictine monks, for whom beer was a safe alternative to dirty drinking water. The abbey’s brewing tradition resumed in 1881, and for the last 45 years, it has continued under the careful craftsmanship of Sister Doris Engelhard, 65—Europe’s last brewmaster nun. Brewing is her way of serving God.

It’s rather known that monks have been brewing beer since the Middle Ages, but you don’t hear so much about nuns. How did you come to be a brewmaster and a nun?
I was actually a brewmaster before I took my vows. I came to the convent when I was a child in 1961. I attended a school that was run by the nuns. I had known always that I wanted a religious life, but my father thought it would not suit me. He suggested I study agriculture instead, but that was not possible in the school. So one of the sisters suggested I work in the brewery. I took a course at a local school and became a brewmaster. Then I decided to join the convent and I took my vows.

Tell me about the beers you make.
I make a maibock, a doppelbock, a dark zoigl and a copper-hued lager. My favorite is the dark zoigl. I’m not so much of a connoisseur of beer—I mostly only drink what I brew at the abbey.

So you also drink beer?
I love to drink beer. I think it is the healthiest drink you can have, as long as you don’t have too much. It is pure—the main ingredients are barley, water, hops and yeast. I drink a bottle or two every evening.

Have you tried many American beers?
Whenever I have an American beer, I drink it—obviously. But I have to say that I do not really find it very tasty. I was in Nebraska in 2005, and I did not get any good beer for two weeks. But then I was in a brewery-bar in Omaha; I don’t remember the name. The beer there was good and the atmosphere was nice and cozy.

What do you think about the craft beer movement?
I cannot imagine that the new wave of craft beers are real craft beers, when they are produced by breweries that have an output of millions of hectoliters. Small breweries in Germany like ours always produced craft beers without making it special or talking about it that much.

Where can people drink your beer?
Only at the abbey. Beer is a fresh product. It should not be crated and shipped and left sitting. It needs to be enjoyed straight away. That is why we only serve our beers locally.

Is brewing beer how you ever expected to express your faith?
I understand some find it a strange profession for any woman, never mind a nun. But I don’t think it’s that strange. Every nun here has a job. That is how we serve God. As Saint Benedict wrote, ‘In all things God may be glorified,’ and that is also true of beer.