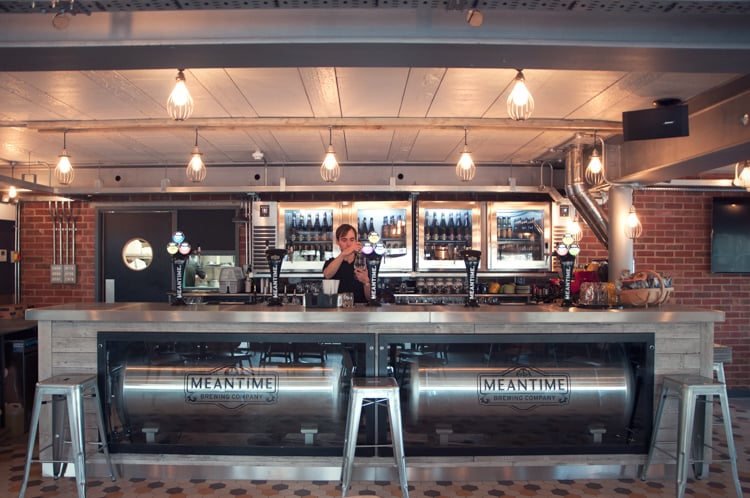 Our liquid bread is perishable. Fresher beer is better, generally, and the freshest beer is found at breweries. Americans know this, and many of our brewpubs pour from taps connected directly to those shiny serving tanks.

Now, imagine if you could do the same down at your favorite local watering hole. That is the sales pitch behind tank beer: the chance to drink brewery-fresh beer somewhere well beyond the brewery walls.
So far it’s not an option in the States. Most state liquor laws prohibit direct delivery from breweries, which typically must sell their beer to distributors as a go-between. That complicates getting beer from the brewery to the bar as quickly as possible—proper, unpasteurized tank beer must get there in a matter of hours rather than days.

For now, to see and taste how tank beer is supposed to work, you need to fly to Europe. It is increasingly trendy in London—a fawning piece in the Evening Standard calls it “the natural wine of the beer world”—with footholds in cities like Dublin, Vienna and Stockholm. Better yet, go to the Czech Republic, where there are now more than 200 tankovnas, or tank beer pubs. Most of them get the stuff delivered in a few hours directly from Plzeňský Prazdroj—better known abroad as Pilsner Urquell.

Other breweries—including the Czech brewery Budvar and London’s Meantime—have had success with the same basic method. But Pilsner Urquell got the ball rolling again in 1995 and has been at the forefront ever since.

Its parent company SABMiller even mentions tank beer in its earnings statements, giving it credit for growing market share in places where lager is otherwise shrinking. That would seem to be a strong indication that its arrival in the U.S. is inevitable, sooner or later. Another reason it seems inevitable: Bar owners make more money off it, in theory. Once the system is installed it’s cheaper to run than dealing with multiple kegs, and because of the interest in it—the novelty factor—it tends to sell more quickly.

The basic idea of tank beer is not entirely new. Some British brewery trucks were delivering ales and lagers directly to steel tanks in pub cellars as recently as the 1980s. It probably died out for a reason. “Mostly I remember it as pretty bland and fizzy and a shadow of the same beer in cask,” says Peter Alexander, who blogs about British beer under the name Tandleman (tandlemanbeerblog.blogspot. com). “It was slightly softer in carbonation than keg but not much. Its advantage was convenience for brewers and publicans. It had no advantage for the drinker.”

Pilsner Urquell first tried it in the 1950s at a pub near Prague Castle, according to brewmaster Vaclav Berka. It didn’t catch on in a big way, possibly because air in the tank would have turned the beer rank fairly quickly. But in 1995, the brewery tried it again—this time with the same basic method they use today: tanks as large as 1,000 liters, lined with sterile plastic bags and filled at the pubs by trucks rushed from Plzeň.

The idea, Berka says, is simply to give more drinkers the chance to taste what super- fresh lager is like in the maturation cellar. The bags protect the beer from air and help it last a few days longer—but still only a few days. Even within the plastic, untouched by extraneous air, the beer needs to be drunk within a week before it stales.

It really is better when fresh.

Part of the trick with tank beer is turning it over quickly. In Prague tankovnas you won’t find a dizzying array of craft beers. At the sprawling and minimalist Lokál, for example, you’ll find Pilsner Urquell from the tank and a dark lager called Kozel. That’s it. Focusing on the tank beer allows the pubs to sell it quickly and keep it fresh. The principle is the same at Zum Böhmischen Dorf—the “Bohemian Village”— an unassuming corner pub in southeast Berlin. Eclectic furnishings include a small, shiny cylindrical beer tank behind glass under the bar. It’s just for show. The real ones are much larger, kept cool in the cellar, with fresh bags of beer arriving from Plzeň in less than a day.

An exception that proves the rule is the popular The White Horse pub in southwest London. There, Pilsner Urquell tank beer competes with an array of cask and kegged ales. Many of Britain’s most ale-centric pubs still serve a token lager, but at The White Horse it’s not just any lager. Chelsea fans pack the place on match days and tear through it quickly.

Tank beer’s growing popularity in London is such that a brewpub called Howling Hops recently opened and declared itself “the UK’s first dedicated tank bar.” Drinks are poured directly from 10 gleaming serving tanks lined up like dutiful robot soldiers behind the bar. The interesting thing is that Howling Hops’ brewery is just on the other side of that wall—and those are the brewery’s own conditioning tanks.

Get it? Tank beer began as a way to imitate brewery-fresh—but it’s now got enough cachet in London that a brewery is calling itself a tank bar.