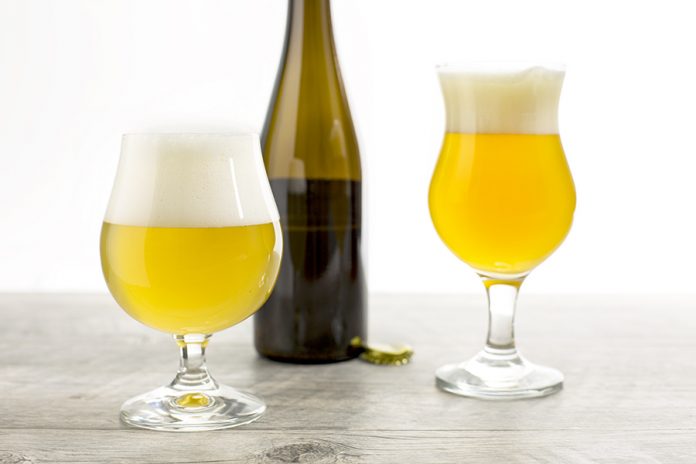 At this year’s Shelton Brothers’ The Festival, a gathering that brings together some of the world’s most revered breweries, I noticed more breweries pouring grisettes than I would have expected. (Which is to say, there were more than one.) Grisettes are light, refreshing European-born beers that I was somewhat familiar with; recently I’d enjoyed Kent Falls’ Lade Øl (a grisette brewed with toasted hay) and, more widely available, Smuttynose’s Hayseed. But to see a handful of grisettes surprised me, especially because most were from American breweries.

When I asked these brewers to explain grisette as a style, I heard answers that usually included the following elements: low-ABV, saisonlike, brewed with wheat, farmhouse, Belgian/French, and some bit of lore involving miners and women in grey dresses. Through subsequent conversations, I set out to determine what elements define a grisette and what its relationship is, stylistically, to saisons.

Like many farmhouse styles (though grisettes aren’t really agrarian in nature, but more on that later…), grisette’s origin story is a bit obscure owing to the passage of time, linguistic challenges and the indifference many of these European brewers seemed to feel toward record keeping.  Yvan De Baets, brewer at Brussels’ Brasserie de la Senne, says there’s little written information to be found on those prototypical grisettes, even for those searching in earnest: “There is only one small monograph on the subject from the second half of the 19th century. But even in it there is only little and sometimes contradictory information to be found. The rest is bits and pieces found in old trade journals and in the general brewing literature, but overall there is very little information available. It means no one really knows what a grisette is or was. But you see almost every brewery making one nowadays.” Or, as Greg Engert, beverage director for D.C.-based Neighborhood Restaurant Group, puts it: “None of these beers were well-documented as far as recipes go. They weren’t made by some modern brewer trying to wow festival-goers. People worked with what they had, but of course they didn’t keep great records because they didn’t think anyone would care.”

This means that grisettes brewed in America today are an interpretation rather than a direct facsimile of the European beers brewed during the late 19th century. They’re different because of aforementioned challenges in recipe research, as well as advancements in brewing technology and ingredients. Those caveats aside, though, I did find a set of characteristics that most brewers I spoke to agree are part of grisettes’ DNA:

1. Grisettes were originally brewed for miners in Belgium’s Hainaut province. According to the book “Farmhouse Ales” by Phil Markowski, and to the brewers I spoke to, as the Hainaut region began to shift from farming to industry (primarily coal and stone mining), its beers changed as well. “Grisettes were for miners, and saisons were for your seasonal workers,” says Side Project brewer Cory King, who brews a grisette as well as many subtypes of saisons. Some say the term grisette refers to the “grey” color of the beer (gris is “grey” in French) due to its long boiling time and percentage of wheat in the grain bill; others say it refers to the grey pinafores worn by the women who would serve the beer to returning miners. But I like Yvan De Baets’ explanation for its vivid imagery: “The beer was made in a region with a lot of stone quarries, and it would quench the thirst of those workers, who came back from work covered with grey dust.”

2. Grisettes are low in alcohol. There’s something to be said for not mixing high-strength beer and mining, but more than that, grisettes were designed to refresh workers after what must have been a cramped, taxing day below ground. Saisons were also probably lower in ABV traditionally; De Baets points to three or four substyles of grisette: grisette jeune (or “young,” brewed yearround), grisette de garde or de saison (a grisette “for keeping,” brewed September through December), and grisette supériere, a double grisette that may have been higher in alcohol. There also may have been a table beer style brewed with the second runnings from a first batch of grisette, which would have been quite low in alcohol. Most of the grisettes I’ve encountered are brewed near the 4% ABV mark.

3. Grisettes are brewed with malted wheat. This detail is perhaps grisette’s defining characteristic, because many Belgian beers of that period would have been brewed with unmalted wheat. It’s unclear precisely why malted wheat should make up a portion of a grisette’s grain bill, but Cory King speculates that it’s to add body and texture to a beer that, due to its low alcohol, could become quite watery and boring. He brews Side Project’s version with oats, malted wheat and spelt “to put lots of protein in there to maintain mouthfeel and excitement.” Likewise, Tim Cliffford of Sante Adairius Rustic Ales says a combination of malted and unmalted wheat make up approximately 40 percent of the grains used to brew Lady in Grey, SARA’s grisette (“It gives it a little heft, a little body for the 4.8% ABV,” Clifford says.)

4. Grisettes have noticable hopping levels. “The quality of the last hops used at the end of boiling or in the hopback was regarded as being very important,” says De Baets. “And overall they were quite hoppy beers.” Maybe not compared to our modern IPAs, but for the time, grisettes placed a bit more emphasis on the quality of hops than farmhouse styles would have.

5. American brewers are leading the charge to revive the style. Despite its Belgian roots, American brewers have been the ones to resurrect grisettes from obscurity (see also: goses). “We give a lot of credit to Americans for reviving saisons, but we’ve always had Saison Dupont as the shining light to show us how to do it. With grisette, we don’t have a lot of commercial examples, so Americans are really far out in redefining this beer,” says Clifford. Cory King echoes him: “I think we in the U.S. are defining what these styles are because there’s not a lot of written history on them. I just sort of made up what our grisette was, and it’s one of my favorite beers that I make.”

Interested in trying a grisette? Keep in mind that contemporary versions vary in the character of their grain bills, the presence or absence of souring bacteria like lactobacillus, and the use of barrels or fruit to add intrigue to the base style. With an open mind, you might keep an eye out for the following: Hill Farmstead Clara (an especially well regarded version recommended by SARA’s Tim Clifford); Oxbow Moon Rocks (a mixed-fermentation grisette aged in oak barrels, a small portion of which previously held gin); Bluejacket and Cloudwater collaboration Twilights (fermented with Brettanomyces, dry-hopped with Galaxy and aged on local strawberries); Sante Adairius Lady in Grey (fermented entirely in oak); Holy Mountain Misere Au Borinage ; Three Magnets Dry-Hopped Grisette; Cerebral Monochrome; and a forthcoming double grisette collaboration from de la Senne and Two Roads, which should be released in a few months.

How to: Make chicha at home (spit optional)