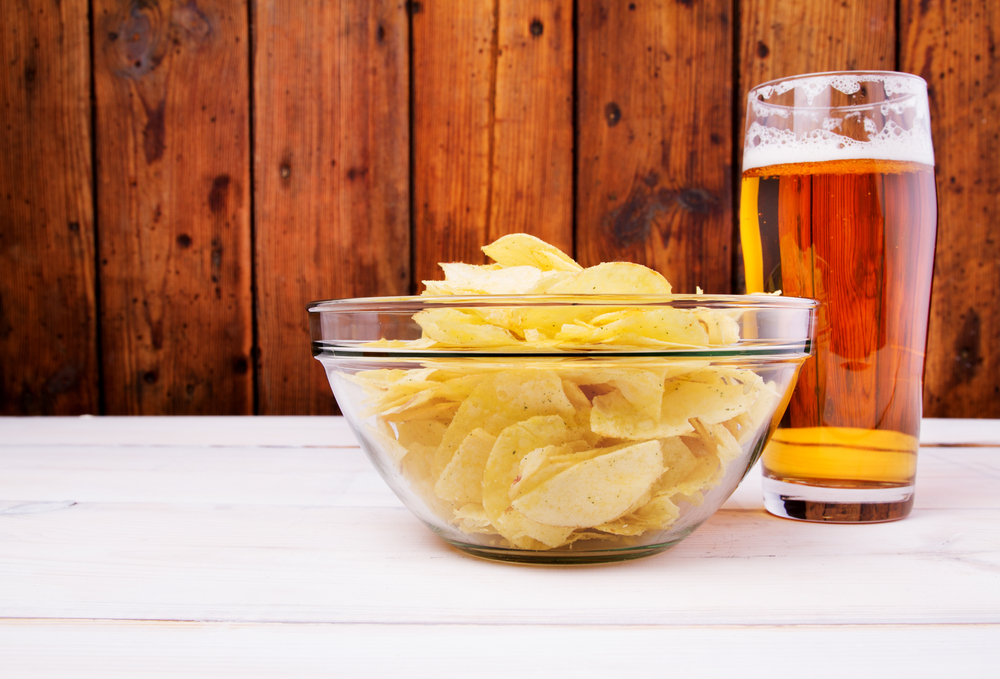 We beer folks—those interested enough in the stuff to not just drink, but also to talk and read about it—we have a few elephants in the taproom. For example: Most of us are white. Many of us drink to excess. And lots of us are fatter than we ought to be.

More diplomatically: Many of us drink more than we should, more often we should, and are more or less heedless of what it does to our health.

Worse still, based on a somewhat rosy and arguably irresponsible view of the relevant science, some of us argue that it is healthy. This is an ongoing narrative in the beer world: that it’s really good for us. Often there are studies cited—or, more often, mentioned without citation—along with nonsense such as the assertion (which is false) that people in the Middle Ages drank beer instead of water because it was safer. Or they may note that beer has no fat—which is irrelevant.

Often this beer-is-healthy narrative comes from folks with a vested interest in us buying more beer. So let me tell you my own bias: I don’t want beer to be healthy. Treating beer like a tonic robs me of my precious sin. I want it to be indulgent, like bacon. But wanting to be naughty from time to time—er, virtually every evening—isn’t the same as saying I want to get fat. I don’t.

Enshrined prominently in my own Beery Hall of Heroes is a guy named Michael Sweeney, and not only for his very useful blog STL Hops. It’s chiefly because he weighed about 375 pounds the first time I met him in St. Louis to talk beer. The next time I saw him, a couple of years later, I didn’t recognize him. At all. He arrived with fellow scribe Stan Hieronymous at a local pub, and I thought Stan must have brought along his svelte nephew. Mike had dropped 150 pounds.

I asked him how. Simple: He cut way back on beer, and he started hitting the treadmill for an average of one hour per day.

“Beer should be something we all do for pleasure and fun. We shouldn’t take the fun away from beer,” Sweeney told me in an email the other day. “But we can’t ignore that it’s a large amount of calories that people are consuming over three or four pints of a 6.5% beer.”

Four pints of a 6.5% beer would be 1,040 calories, by the way. Now, you could spread that out over a leisurely afternoon and evening to avoid serious drunkenness—but fast or slow, you’ve still consumed 1,040 calories. That’s roughly the same amount you’d get from three hot dogs, including buns and ketchup.

Yes, plenty of research suggests there are health benefits to moderate consumption. But beer folks often seem to imply, as if with a wink and a nudge, that of course we all drink moderately, right?

For example: Have you heard the one about how the beer belly is a myth, and beer doesn’t make you fat? Let’s unpack that.

It’s true that alcohol calories don’t go to our fat stores. Instead, they go directly to our bloodstream (via the liver) to be burned as energy. Problem is, our bodies are then burning alcohol calories in place of others—such as the carbs in the beer, or the fat in those wings. So saying beer doesn’t make you fat is caloric sleight of hand, like budget-writing politicians who move money around to hide the pork.

Look: Maybe you know a few people who truly drink moderately, all the time. Maybe you’re even one of them. Most of the rest of us binge drink at least occasionally. Even among those of us who avoid drunkenness, it’s enlightening to spend a week counting “drink equivalents” as defined by the U.S. government—because your score is likely to be higher than you thought, and because actually counting how much you drink is an uncomfortable thing to do.

That applies to alcohol as well as calories. The beer we drink has more calories than most of us realize—one reason why the U.S. government has included it in new menu rules that will require chain restaurants to disclose the calorie contents of beers they serve. (Among others, these changes frighten pizzerias, which might have to include complicated matrices of size, crust and ingredients on their delivery menus. As my editor Kate said, “God, if ever there were two products I don’t need to know the calories in, it’s pizza and beer.”)

But those rules won’t apply to most of the places we drink or buy beer, so we are free to remain blissfully ignorant. Or, we can guesstimate. There are ways to do it without busting out trigonomic equations or calculators at the pub.

You can use this information to help you limit intake, if you want. Or you can use it as sport, to properly measure your gluttony. As you like. Either way, the numbers are likely to be higher than you expect.

Alcohol and residual sugars are the two main sources of calories in beer. The alcoholic strength is usually printed on the label, thankfully. But to calculate the sugars you need to know something called “gravity”—essentially, the density of the liquid—before and after fermentation. That’s cool for homebrewers (and here’s a calculator if you really want it), but brewers rarely publish that information. So we need a shortcut, a way to make very good guesstimates. 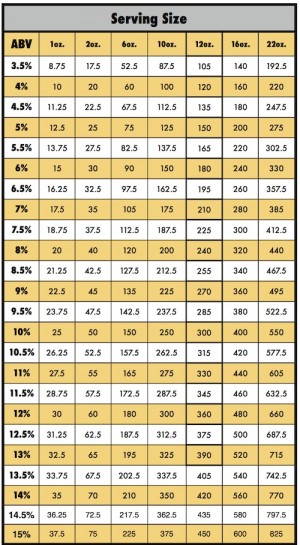 We can thank LA blogger John Michael Verive from Beer of Tomorrow for creating a very useful chart (above), and the simplest method for calculating calories I’ve ever seen. He also wrote a useful post on this topic a few years ago. Ready? Multiply the ABV by 2.5, then multiply that by the number of ounces in your beer. So:

It’s not totally accurate, but it will put you in the ballpark. For sweeter beers that may have more residual sugars, you should increase the multiplier from 2.5 to 3.

So we can suppose that 9% double IPA you’re drinking has about 270 calories. If you drink two, you’ve consumed the same number of calories as a Big Mac (540). (Not only that, but you’re some unknown percentage chance more likely to beg your designated driver to stop at McDonald’s so you can order one.)

Last night I drank a pale ale (5.7%) and later a helles lager (5.2%). In my mind I had “just a couple of beers” but each was a half-liter (16.9 US ounces), and the very idea of counting their calories irritates me. But this is for science. So I ended up drinking, let’s see, about 460 calories. Or, I drank the equivalent of a bacon double cheeseburger. Which seems a bit unfair, since I didn’t choose to eat one.

If we’re going to understand what we’re consuming, and be responsible for it, then we need to be honest about what it is. Even if we would prefer to charge on heedless of our sin, it’s nice to have a ballpark idea of just how sinful we’re being.

Beer is a food after all, but it’s one of the naughtier ones. Thankfully.