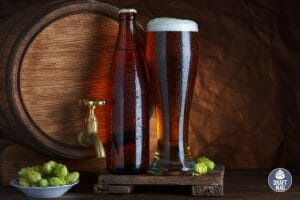 If you’re wondering, “How many beers equal a shot of vodka?” the straight answer is one 12-ounce can or bottle of beer with 5 percent ABV is equivalent to one shot of vodka. However, the figures may vary when the volume and ABV of beer change.

Therefore, for perfect alcohol measurement, it is vital to know the mathematics and factors behind it, so grab a pint or two and stick with us on this fun learning guide.

How Many Beers Equal a Shot of Vodka?

Technically, one 12-ounce bottle of beer with 5 percent ABV is equivalent to one vodka shot (1.5 ounces) with 40 percent ABV. But what is the logic behind this comparison? As both are alcoholic beverages, the comparison is based on the amount of ethanol present in both drinks.

The standard serving size of a beer bottle, be it domestic, dark, draft, malt, or brown ale, is 12 ounces (354 milliliters) and it has 5-6 percent ABV, whereas a shot of vodka is equivalent to 1.5 ounces (44 milliliters) and the ABV ranges from 40 to 60 percent. Let us understand the math behind this. For instance, to determine the alcohol content in a standard serving (12 ounces) of a beer bottle with five percent ABV, you multiply the alcohol percentage by the size of the drink. That is 12 ounces (354 milliliters) x 0.05 = 0.6 ounces (17.4 milliliters) of alcohol.

The standard vodka shot of some popular countries can be found in this table:

The standard-sized beer bottle or can is 12 ounces (375 milliliters), which is also termed a pint. If you order a beer on draft, it contains 16 ounces (473 milliliters) of beer. However, beer is also served in different packagings and sizes.

Furthermore, the size of the pint again depends on your location when ordering. Several renowned breweries serve their specialty draught beers in sizes that are smaller or larger than the standard-sized beers.

The definition of a standard drink is a drink that contains 0.6 percent fluid ounces or 14 grams of alcohol. One vodka shot and one beer both contain approximately the same alcohol content. The different examples of standard drinks include:

Vodka Shot vs Bottle of Beer

Here are some factors that determine how we can differentiate these beverages.

A standard shot of vodka has 1.48 ounces (44 milliliters) of volume, whereas a standard-sized beer bottle has 12 ounces (354 milliliters) of volume. Furthermore, every alcoholic drink comes with an alcohol volume, which shows the amount of alcohol present in the total volume. For instance, a 10-ounce beer with five percent ABV contains 0.5 ounces of alcohol in it, and so on.

Alcohol by volume of beer can range from 4 to 12 percent, whereas the ABV of most hard liquors ranges from 40 to 50 percent.  When it comes to beers, there are several choices regarding volume. Beer cans and bottles come in 12 ounces, 16 ounces (a pint), and 24 ounces (a tallboy).

Although there is no universal rule regarding the measurement of a shot, a shot holds 1.5 ounces in the U.S. The main objective is to consider the number of vodka shots you consume, as your body is efficient at processing just one vodka shot in an hour.

It is evident that when comparing a bottle of beer and a shot of vodka in terms of alcohol content, they both have similar alcohol content. However, this will vary wildly depending upon the style and brand of the alcoholic beverage.

The ABV of some popular drinks are: 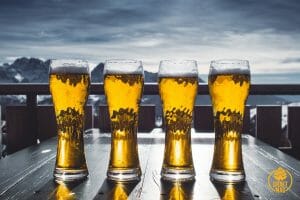 The drinking rule is to slowly drink any alcoholic beverages to offer enough time for your body to process them. It is easier and better to figure out your tolerance by drinking beer slowly as it comparatively contains lesser alcohol.

A shot of vodka with 40 percent ABV contains .60 ounces (17.7 milliliters) of alcohol. It is enough to get you drunk when you drink it fast. Regardless of the different alcoholic beverages, they tend to have the same effect as both a vodka shot and a bottle of beer contain approximately an equal amount of alcohol.

The impact of drinking any alcoholic beverages is determined by Blood Alcohol Concentration (BAC). Generally, the body is efficient at processing only one drink in an hour, be it one vodka shot, one beer bottle, or one glass of wine.

Comparing calories of a shot of vodka and a beer bottle is an altogether different story. A shot of vodka has fewer calories compared to a bottle of beer.

Yes, you may mix beer and vodka. There is no harm in mixing these drinks as both are made of ethanol and water. Moreover, vodka beer cocktails are refreshing and easy to make.

You have the option to create a boilermaker (bomb shot/beer drink). Try one of the following ways to mix beer and vodka:

However, mixing hard liquors with beer increases the alcohol content of the beverage, so there is the possibility of consuming more alcohol without realizing it.

Other Size Comparisons Between Beer and Vodka

Here are some more comparisons between beer and different amounts of vodka or other alcohol.

– How Many Beers Equal a Vodka Bottle?

– How Many Beers Equal a Fifth of Vodka?

– How Many Beers Equal a Pint of Vodka?

– How Many Beers Equal a Shot of Whiskey?

– How Many Shots Equal a Beer?

– How Many Beers Make You Drunk?

Drinking one 12-ounce bottle of beer with 5 percent ABV within an hour may get you drunk. A standard-sized bottle of beer contains 0.6 ounces of alcohol. Our body is efficient in processing somewhere around one ounce in an hour. This is why drinking more than one bottle of beer in an hour could leave you intoxicated. 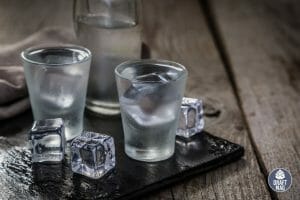 We have tried to simplify the math behind comparing a beer with a shot of vodka. As evident from the guide above, a bottle of beer is equivalent to a shot of vodka in terms of alcohol content, so by keeping in mind that any type of alcoholic beverage has a certain impact on our bodies, let us sum it all up:

Always remember that your body can only process one standard-sized drink — a shot of vodka, a bottle of beer, a shot of whiskey, or a glass of wine — in an hour. Anything more than that could leave you intoxicated, so the bottom line is to drink responsibly, know your limits and stick to them.