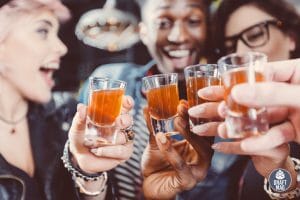 100 shots of beer, also known as a centurion or the century club, is one of the most popular drinking games centered around beer. Essentially, this is a contest where a participant tries to down 100 shots of beer within 100 minutes.

In this complete guide, we present our best tips and tricks on how the game is played and how to maximize your fun while trying your best to down 100 beer shots.

To organize a game of century club, you will need at least two participants. Although to maximize the fun, it is recommended to have a much larger group. The first thing is to make sure that everyone is seated comfortably and suitably excited for the challenge up ahead. Do not force anyone that is not a willing participant to join; it will not be fun for them or anyone else.

Next, you will need shot glasses for each participant and a 12 pack per head to fill those shot glasses. Also consider bins or trash bags for possible events of vomiting.

The overarching objective of the game is pretty simple – making it through the entire 100 minutes duration without ever leaving the sitting spot or vomiting. Contestants are not allowed to leave their spot at any time, not even to use the washroom.

Once you start pouring the shots, someone should be assigned to keep track of elapsed time. Someone else must also be responsible for filling up glasses once emptied. Everyone involved must take a shot each minute unless they quit for some reason.

However, keeping track of time can become an arduous task, especially after the first hour. It is recommended that you maintain a secondary way of keeping track of things, like a playlist of songs that are only a minute long, and contestants drink whenever the track changes. If anyone gets sick or leaves their spot, they are disqualified.

If you wish to know the total amount of beer you will end up consuming with 100 shots, the very first variable is where you are. In the U.S, a shot of beer is around 1 to 1.5 ounces or 30-35 milliliters. If you are in the UK, a single shot is usually 25-35 milliliters.

A quick calculation reveals that the 100 shots will be equivalent to around 84-118 ounces of beer, or 2.5 to 3.5 liters of beer. Considering the fact that a standard beer serving is equal to 0.35 milliliters or 12 ounces, that makes the hundred shots of beer the equivalent of 10 to 12.5 regular servings of beer.

The only variable here is the size of the shot, and even though that does not seem like a challenge, keep in mind that you only have 100 minutes to down the entire amount without ever leaving your seat to take a break.

If you are feeling adventurous enough to give it a try, the first thing you need is a whole lot of good luck! You should also strategize to ensure that you do not drink too much too quickly, or else you may have to exit the game sooner than you think. The best way is to pace yourself and drink only one pint of beer every 10 minutes.

However, take solace in the fact that most people do not make it through the game. To process just a pint of beer, the average human body needs around 60 minutes, so even if you end up making it through the 100 minutes and 100 beer shots, your blood alcohol level will be so high that you will risk getting alcohol poisoning.

However, where there is a will, there is usually always a workaround. The best way to go far and stay relatively sober is to use a low alcoholic beer, something around 3.5 percent ABV instead of the more standard 6 percent ABV beers or even homebrews with even higher alcohol content. As with everything, the key is to always be aware of your own limits.

Know that 100 shots of beer is a sizeable challenge, one that is not for the faint-hearted. Only people with a high alcohol resistance and capable of drinking up to 1.5 ounces of beer a minute for 100 minutes can take up this challenge.

Here are some drinking games that are similar to 100 shots of beer for your next get-together!

If the thought of guzzling down three and a half liters of beer in less than two hours doesn’t seem like an appealing proposition to you, there are other options out there. The first one of them is beer pong. 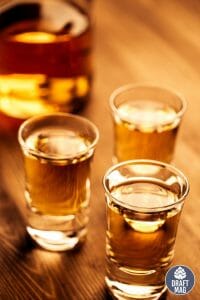 Generally, beer pong is played by two teams with two members each. Each member takes turns throwing a ping-pong ball (hence the name!) targeted at the other team’s beer cups laid out on a table. If a ball lands in a cup, the other team has to drink a shot. If both members sink a cup each, they get to go again unless someone misses.

The game is finished after one team has scored all the cups of their opposing team. The winner of a game usually stays on the table until the next set of challengers steps up. A list is maintained to form the order of the challengers and keep a tab on the score.

There are many variations of beer pong, which is a popular pub game mainly among college and university-going students. Beer pong has also been represented in popular culture across several college-centered movies, resulting in its global popularity.

In one variation of the game, the first shot is decided by the “eyes” rule, where the first player from each team must maintain eye contact with their opponent while shooting the first shot. If both miss or make it, their partners take over.

King’s is a beer game that employs a deck of playing cards. The cards are laid around a glass in a circular fashion, with each number assigned a particular rule. Players take turns drawing cards until all of the cards are finished.

As discussed, a standard deck of cards is shuffled and placed around an empty or full cup containing the drink of choice. Each number of cards carries an associated act which must be performed either by the player or the group, depending on the house rules.

Each player takes turns until all the cards have been drawn. Then either the game is stopped or the cards are reshuffled depending on the state of intoxication and other factors.

Here is a handy table of the common rules for each card:

Here’s another fun drinking game for you — flip cups. The basic premise of this esteemed beer sport is simple. Two teams stand in a line facing each other, each player with a plastic cup full of beer. The first players from each team go at the same time and drink the content of their respective cups.

Until and unless the first cup is flipped properly, you are not allowed to move to the subsequent participants. Ultimately, the first team to finish and flip all the beer cups wins the game. As with pretty much any game of drinking, there are several variations of flip cups, but we have outlined the basic rules and the most common gameplay process here.

If you’re still hanging around and not racing towards your next beer power hour, then let us summarize the main points for you: 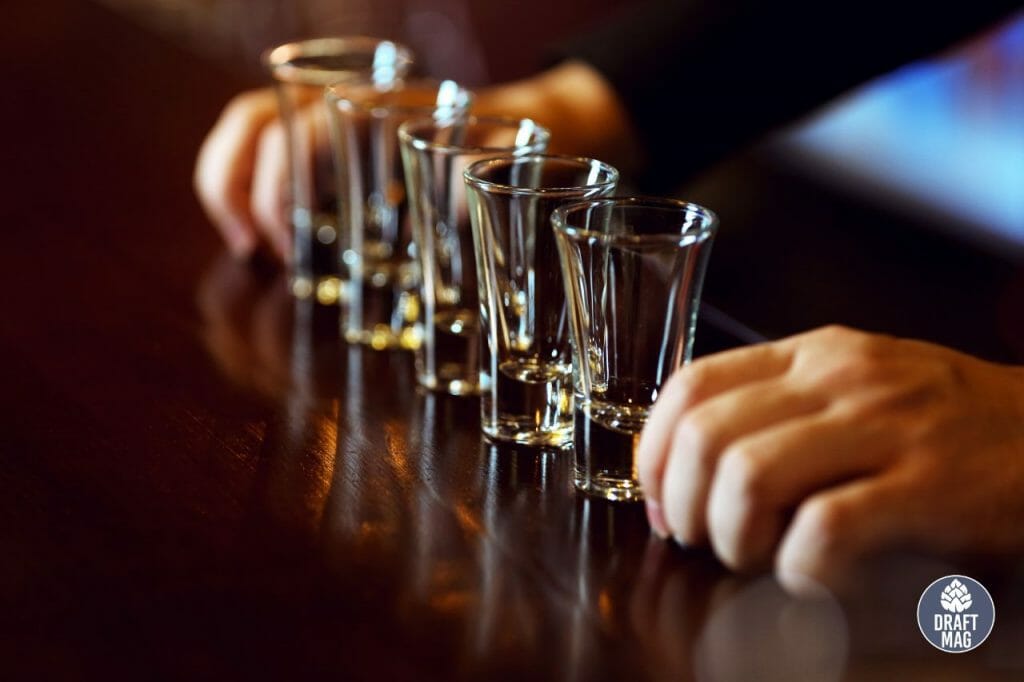 Beer games like 100 shots of beer can be an incredibly fun group experience and may end up as a core memory that lasts a lifetime. However, the key is being smart and being responsible with your drink. As long as you are drinking responsibly, go ahead and enjoy yourself!