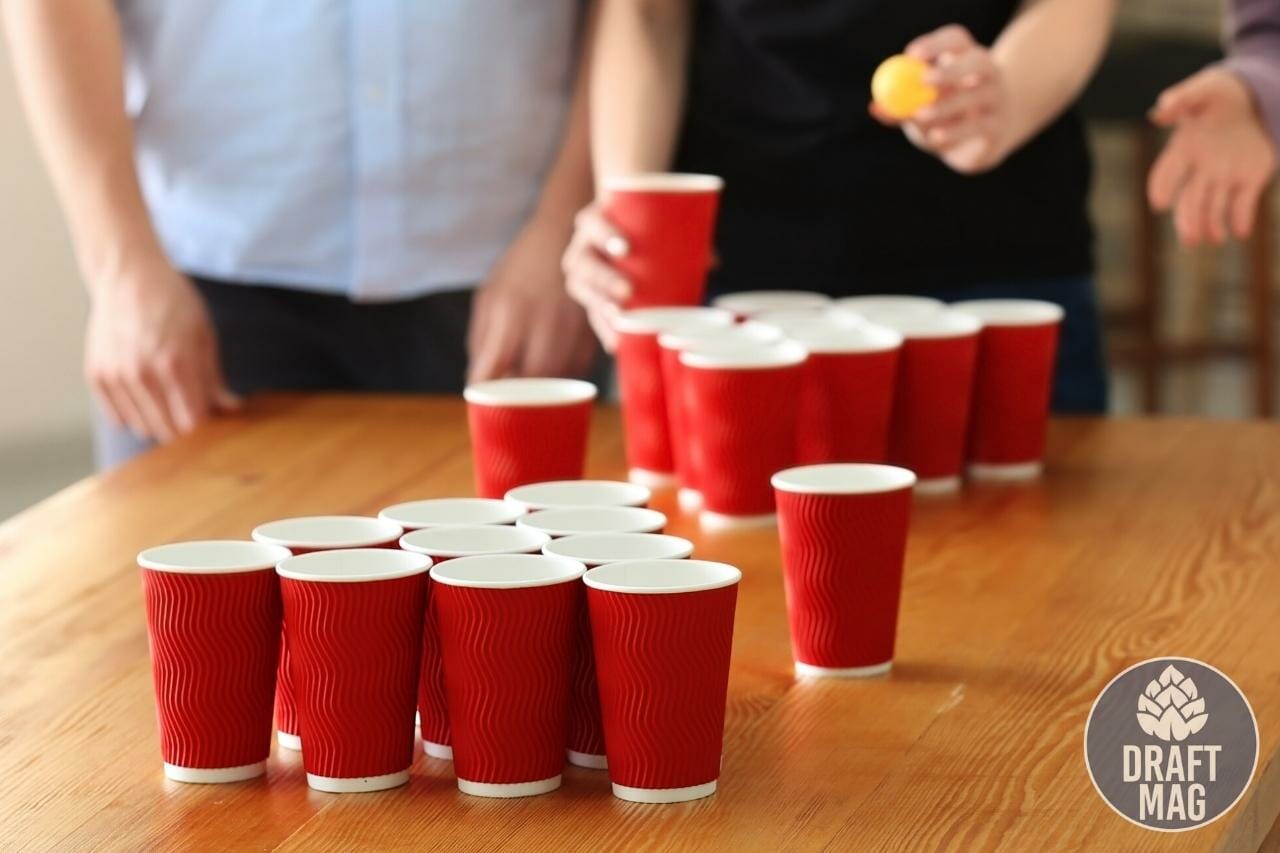 To play beer pong like a professional, you should start with the easy shots. Hit the first cup to get it out of the way and keep going. When you receive a re-rack or as you progress, you will be able to hit the harder shots with ease.

In this article, we will pass on the secret tips and tricks that professionals use to win every game.

How To Play Beer Pong: Tips and Tricks

Starting with the cups closest to you and choosing the right teammate are key factors to win at beer pong every time.

Playing beer pong is straightforward once you get accustomed to the game rules and tips that we will highlight in this article. Let’s start making you a pro.

Contrary to what many think, starting with the cups closest to you is the easiest trick to win faster. If you aim for the hardest cups first, it slows you down. Target the first cups, remove them from the picture, and push on after hitting them.

It’s no secret that your teammate determines if you win or not. It wouldn’t be fair if you’re doing all the job for your team. The trick is to choose someone who’s quite tall, has superb hand-eye coordination, and knows the beer pong rules. Tall people often have lean arms, and this is an added advantage when shooting a ball into the opponent’s cups.

Each beer pong game has its own set of rules decided upon by the players. The other team is automatically eliminated if you shoot two balls into the same cup simultaneously in some games. In others, you can collect the ball and reshoot it if it bounces off the cups’ lids and back onto the table before hitting the floor. Once you get the rules clearly, you can shoot your balls in a way that won’t get your team a strike.

One trick that works for professional beer pong players is focusing on the rear of the red solo cup you wish to strike instead of the entire group. It’s often easier when you aim for the back of the cup because there’s a high chance that the ball will slip right into the cup. However, this trick is only effective when you’re not yet tipsy or lightheaded.

Some professionals argue that dunking the ball adds weight because a tiny film of water coats the ball. It provides some mass, which helps your ball get into the cup without air resistance.

Find out which shooting style works best for you. As long as the ball lands in the cup, there is no right or wrong manner. Whether it is the bounce shot, the high arc, or the underarm shot, knowing which style works best for you makes it easier to clear every cup when you shoot the ball. If you haven’t found a technique yet, keep experimenting.

Take note of the mistakes you make and how you’re missing them. Your reracks will be better informed as a result. Also, keep an eye on your heart rate. You want to strike a balance between being comfortable and being focused.

Depending on the rules, distracting and intimidating your opponents is not a bad idea. Crack jokes or say anything that will get into their heads when they’re about to throw, provided that you do not make contact with the ball. If you do, your opponent will either get another shot or be able to take the cup away from your side.

Another tip to playing beer pong like a professional is practicing as much as you can. You can practice at home with cups of water or at any beer pong spot. Even if you don’t always win, keep playing the game.

It’s easier to win when you’re having fun and enjoying the game. Bear in mind that it’s just a drinking game, so it doesn’t hurt to drink a couple of beers too. The goal is to have fun, unwind and possibly get drunk. Although it is essential to pay rapt attention to clearing your opponent’s cups, don’t forget that it’s just a game.

How To Set Up for a Game

Setting up for a game of beer pong is as important as playing the game. The great news is you can set up beer pong easily with these steps. 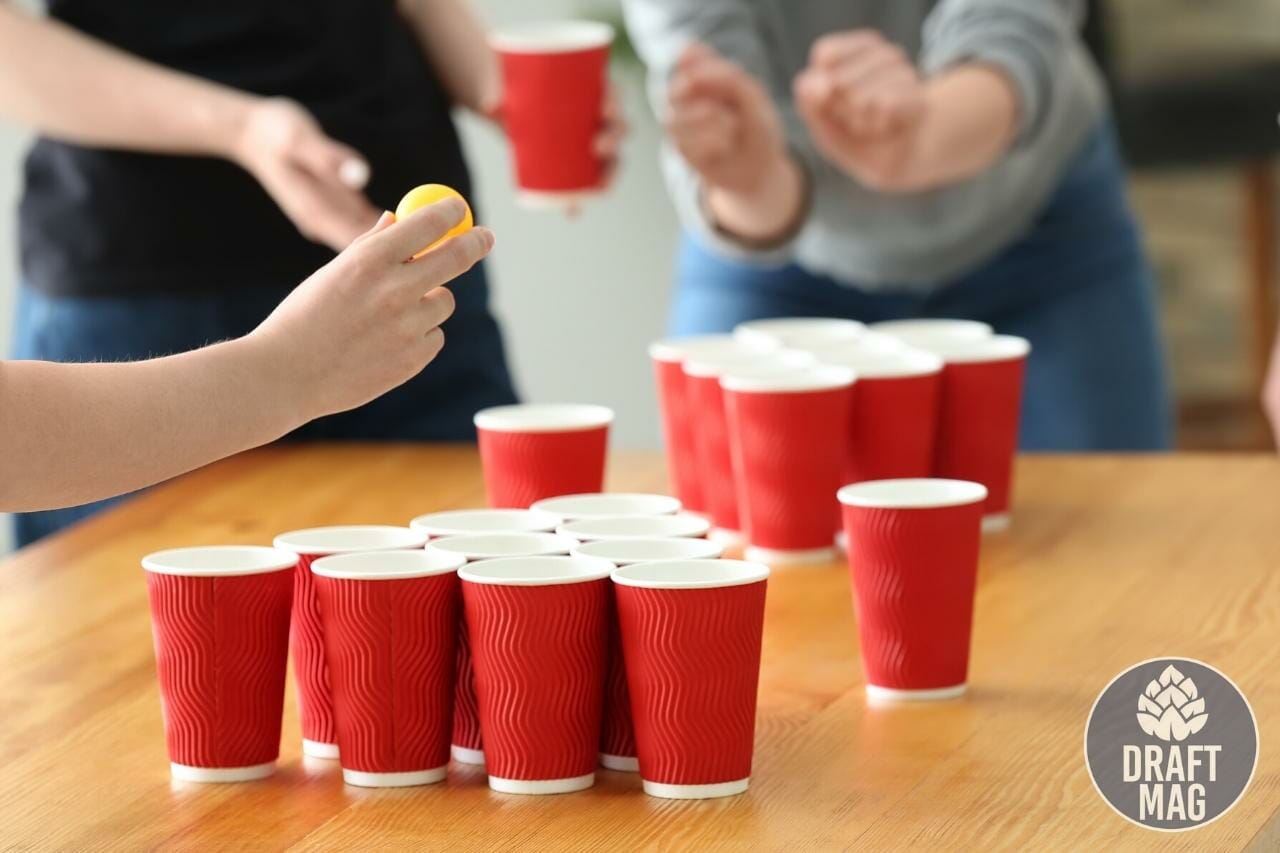 The first step to setting up a game of beer pong is to get your beer pong equipment ready. The equipment you need for playing beer pong is 10 to 20 cups depending on the number of players you have for the game. You’ll also need an 8-foot rectangular table, but if it isn’t an official pong game, we’d say you can use any table with a wide rectangular surface.

Finally, you’ll need two ping pong balls and a can or bottle of beer.

Depending on the number of players interested in beer pong, you can organize your teams into groups of two. It can also reach as many as 10 members on each team. There’s no limit to the number of members on a team as long as you have enough cups for both teams.

The best way to arrange cups for a beer pong is to place them in a triangular or pyramid-like shape. Do this on both ends of your table to mark each team’s cups.

There are many rules guiding the game of beer pong. You can alter any of the rules to suit your needs, but make sure to state the beer pong instructions clearly and ensure that it is understood and agreed upon by all the players.

You can decide which team plays first through several means. One of the most common ways to do this is to get team members to look at others in the eye and attempt to throw a ball in either of their cups. The first to do that successfully earn their team the chance to play first.

You can also choose who starts first by flipping a coin or using the more playful rock, paper, scissors game.

Here are some more helpful information regarding playing beer pong.

– Are There Any Variations to Beer Pong Rules?

While there are universal rules of cup pong, there are also variations of these rules depending on the players such as bounce shot or elbowing. Beer pong players can always tweak and create their own set of unique rules as long as they’re all having fun.

The general rule of every beer pong game is that a team must have thrown a ball before the other team is allowed to take their turn. Here are some common rule variations to avoid looking like a complete newbie.

The bounce shot is a common beer pong rule. If a bounced ball hits the table before landing in the opponent’s cup, they have to take away two cups. In a situation where just two cups are remaining from the opposing team, you can only remove one cup.

However, this shot can be countered by the opposing team swatting the ball away with their hands.

Each player has to make sure their elbows are far behind the edge of the pong table. It prevents players reaching too close to their opponent’s cup for a shot. If anyone on each team is found guilty, their shot is canceled.

When you or a teammate shoots two balls into the same cup simultaneously, the opposing team is automatically eliminated from the game. Although it’s a very difficult move, your team automatically wins if you successfully do this. The opposing team then has to drink the beer from all the cups on the table.

Re-racking simply reorganizes your cups into a different layout during a game to give you an added advantage. However, you can only re-rack once per game, which prohibits you from getting a redemption shot.

If you choose to re-rack, you may choose a triangle, line or diamond shape, but in other variations you can re-rack into any shape or form you wish.

In a case where you shoot your ball and it rolls back to you, you instantly get a chance to reshoot the ball. The tricky thing is that you are only allowed to reshoot creatively. You can either use your mouth, shoot the ball with your back turned, or be blindfolded. The goal is not to shoot the ball as you normally would.

– What Type of Beer Can I Use To Play Beer Pong?

Any type of beer can be used to play cup pong. There are no strict rules on the type of beer to use. If the game consists of only adults, you can use a beer with a high alcohol volume. If there are younger players, you can try using any brand of root or citrus beers.

However, some people prefer to use water instead of beer. While that’s more sanitary, there’s no fun in it.

What’s a game of beer pong if there’s no beer?

If you’re big on sanitation, we’d advise that you get a bowl of rinsing water for the balls in case they hit an unsanitary area. 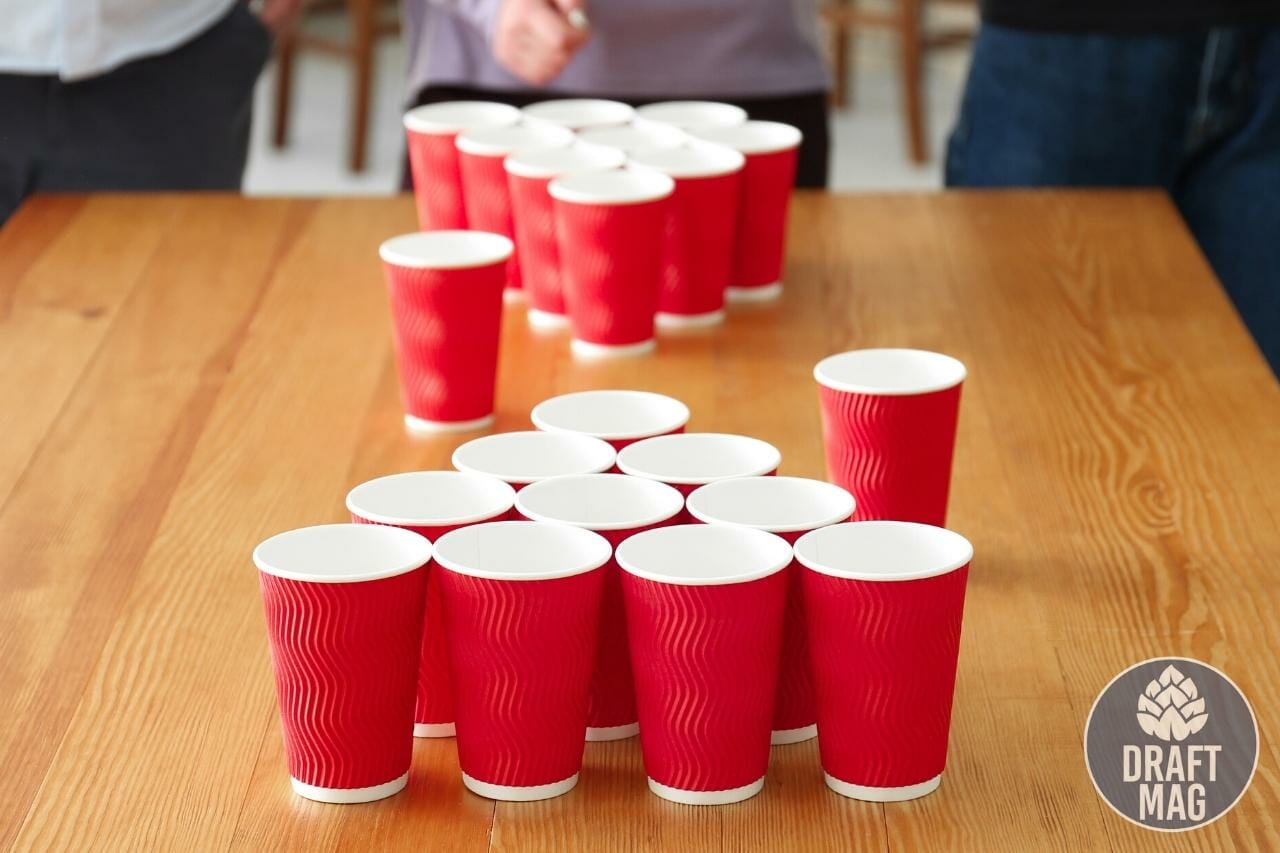 All you have to do is understand the rules, tips and tricks of beer pong and you’ll begin winning games like a pro. Let’s sum up everything we’ve discussed so you’re ready for your next game.

Beer pong is a popular social game that many beer lovers enjoy. Now that you’re equipped with some expert skills, you can participate in any beer pong game with your shoulders held high in confidence.