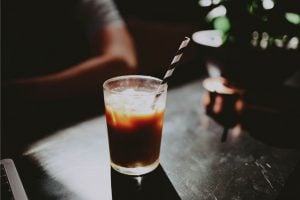 The belief that drinking beer with a straw will get you drunk faster is a popular one. However, there is no scientific evidence to back up this claim.

In this article, we will discuss all you need to know about drinking beer with a straw and if it actually makes you get drunk faster.

If you’re a seasoned party-goer, always looking for new ways to spend a good time with your buddies, then you might be wondering whether drinking beer with a straw — as odd as it may sound — could be the next trend to get drunk.

For this reason, we came up with a vademecum for all of those daring people that are willing to give a try to this peculiar technique to enjoy a brew. Here is what you will find in the next sections:

– Will You Get Drunk Faster if You Drink Beer Through a Straw? Yay or Nay

Drinking beer from a glass or cup can get you drunk just as fast depending on the alcohol content and how many drinks you’ve had. Drinking from a straw does nothing to increase your level of intoxication.

The reason that causes most people to believe they get drunk faster when using a straw is probably tied to the large quantity of carbon dioxide in their beer. Excess carbonation in beer makes it easier to get drunk faster, but this has nothing to do with the “displacement of oxygen.”

In fact, the point is that using straws lets you drink more without realizing you have. That is because, as you will feel only a splash of bubbles on your tongue, you will be tempted to sip faster and faster. That way, you will get drunk faster — but only because you’ve drunk too much.

What Actually Happens When You Drink Beer With Straw: The Truth and Nothing But

A lot of people have come up with explanations for what actually happens when you drink beer with a straw. Straws are believed to be like vacuums. According to the Straw Theory, drinking beer through a straw eliminates the oxygen flowing through both ends of the straw. When this oxygen is eliminated, the boiling point of the alcohol also drops.

At this point, the alcohol is quickly absorbed and creates an intoxicating feeling faster than if it is drunk normally. Due to the fact that there is no scientific proof to justify this process, it is safe to say that it is merely an assumption.

There is no complex process involved when drinking beer through a straw. Using straws when drinking beer is mostly for convenience and sometimes aesthetics. Whatever alcoholic drink you take will get you intoxicated just as fast, whether you use a straw or not.

How Do You Drink Beer With a Straw: Learn How To Chug a Beer With Class 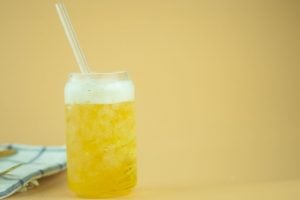 With these simple steps, you have successfully learned how to chug a beer. It is a fun way of savoring and enjoying your ice-cold brew.

Are There Benefits of Drinking Beer With Straw: The Positives

There are a couple of benefits associated with drinking beer out of a straw. Apart from its aesthetic purposes, drinking beer with a straw is a convenient way of drinking without spillage. It is easier to converse and tilt your head around. Using straws is a great option if your beer has ice cubes in it. That way, you don’t always have to tip the glass towards your face.

Drinking beer with a straw is also beneficial to invalids and people with disabilities. Some people have their motor senses impaired. Others find it hard to swallow easily. In such cases, drinking from a cup might be challenging. Using a straw is helpful because it helps them drink beer with ease.

Another benefit of drinking beer with a straw is that it is hygienic. If you’re visiting a bar or club, there’s a high chance that the glass that your beer is being served in has been used by several others. In some cases, it might not be properly washed or handled. Using a straw is more sanitary and protects you from harmful bacteria.

Besides, canned beer is exposed to lots of dust at the grocery store or wherever it is kept. Placing your mouth directly on the can can expose you to bacteria that are harmful to your health. Using a straw prevents this. You can also avoid discolored teeth by using straws for drinking beer.

Are There Side Effects of Drinking Beer With Straw?

Although drinking beer with a straw has its benefits, there are also negative side effects to using a straw. First of all, it can cause stomach upset, nausea, and bloating. This is because there is barely any chance to eliminate excess gas before drinking. Also, the continuous use of straws for drinking beer can lead to the appearance of wrinkles around the corners of your lips due to too much puckering.

Using straws with beer also causes acid reflux. When you use straws, you’re swallowing air half the time, which leads you to burp over time. Aside from these downsides, straws are generally bad for the environment. They are not environmentally friendly and can’t be recycled. Besides, straws can cause pollution if they’re littered around the environment.

Are There Eco-friendly Straws for Drinking Beer?

Drinking beer with plastic straws can be unhealthy for the environment. Aside from the fact that they are made with some toxic chemicals, plastic straws are simply not great for consuming beer or other liquids. There are healthier alternatives to using plastic straws.

One such alternative are bamboo straws. Bamboo straws are plant-based and can easily be recycled. They are also durable and have no negative impact on the health and environment. Other alternatives to using plastic straws include:

Some of these alternatives are not without their disadvantages, but they are much healthier when compared to plastic straws. However, the best way to be on the safe side is to not use straws at all. Drinking beer with a straw can increase your alcohol consumption which you may not want.

If you want to enjoy your beer more, you might just have to ditch that straw and use a glass. That way, you can control the amount of alcohol you consume.

From this article, you should have learned that drinking beer with a straw surely doesn’t get you drunk faster. Let’s go through the main points once more for a quick summary.

Drinking beer with a straw is up to you. It’s not a wrong move, but if you’re using straws intending to get drunk faster, you won’t. Drinking beer out of a straw does nothing to make you feel intoxicated faster.