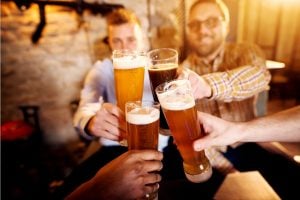 Why do people like beer? Well, the reasons might vary but zythophiles can assure you there is a lot to like. Over time, beer has emerged to be a divisive drink. Beer evangelists indulge in it unapologetically, while the critics simply don’t understand the need to stock up the fridge with it.

Despite being controversial in its taste, this crowd-puller beverage has been celebrated for millennia, making it one of the most popular alcoholic drinks in the world. This leads us to the most important question — why do people drink beer? Pull up a barstool and unwind with a chilled one while this article helps you in exploring how the beer came to be so popular.

To begin, we must first understand the basics of beer in order to get to the bottom of this fondness. As beer aficionados, you are often asked this particular question: what makes a beer good? Contrary to the popular opinion of beer being bland, it is multidimensional in terms of adding taste and texture to your palate.

What you are looking for is a balance in your first sip. A well-balanced correspondence between mouthfeel and body is what earns the title of a good beer. To put across simply:

Interestingly, beer is often associated with “a sense of body” experience. This is because of the well-cultivated flavors (such as nutty, fruity, malty, toasty, etc.) that give character to the beer and an excellent texture to the palate.

These flavors aren’t necessarily added in the brewing process but are naturally acquired as an outgrowth of fermentation.

Influenced by aromatic and visual prompts, the taste is a highly evolutionary human sense. The five commonly known taste receptors are: sweet, sour, savory, salty, and bitter. The recent discovery and potential addition to the five receptors as mentioned above is “umami.” It is a Japanese term, often associated with a meaty taste.

A trip to the wilder days will tell you that anything bitter was a warning to your taste sense and perhaps, an equivalent of something poisonous. Call it a survival instinct or a healthy dose of taste conditioning; the result is two things:

However, if bitterness is a warning, why do people drink beer? That’s because the bitter rejection response is not always a perfect system. As we moved towards civilization, we outgrew this taste conditioning. Now people appreciate the bitter taste of beer in the same way they love the subtle sweetness of dark chocolate or aromatically rich and robust coffee.

This brings us to the conclusion that people like the combinations of tastes served to their palate, along with the bitterness.

Why Do People Drink Beer

Let’s hop onto the reason train and find out what it is that attracts people towards beer. Here are a few reasons:

As confusing as it sounds, especially after reading the bitter rejection response segment, people actually like the bitterness. To break it down, there are two types of beer enthusiasts:

The people belonging to the Type A category, who instantly fall in love with the bitterness, are just like people who choose savory foods over sweets. Due to the gene variation, no people are alike. Some are naturally drawn to the bitterness; some are simply not.

Coming to the Type B category, this is a curious set of groups. The bitterness of beer simply grows on them, and over time they don’t find the bitterness as troubling. Flavor contributes a lot to this fondness, which brings us to the next reason.

– For the Art of Drinking Beer 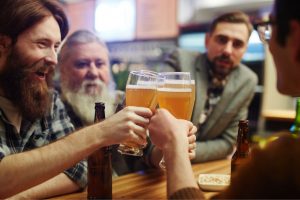 Just like wine connoisseurs go on this mesmerizing journey with each sip of wine, beer aficionados have their own roller coaster ride with it.

Depending on the unique flavor profile of your taste palate, you will start off with a hit of the flavor notes as described above.

The intensity of the flavor is subjective. This is determined by how your palate responds to subtle tastes. However, the most common intensity notes range from assertive, delicate, mild, and balanced to bold, robust, harsh, and complex.

Step III: Development Course of Beer in the First Sip

From the mouth, it hits the throat, leaving a lingering taste of a unique set of after flavors. These include a dryness followed by a nutty flavor, or a combination of sweet and alcoholic, or warm but bitter, or acidic and quenching.

– For Its Cultural Representation

We are living in a time of international relations and brotherhood. From cultural acceptance to inclusivity, we are witnessing it all. This also includes beer. Not sure how? Many countries have their own specialty in beer.

Beer is not just a beverage; instead, it conveys a sense of identity and communality. Let’s co-exist in international beer aisles is the mantra of beer enthusiasts.

– Beer and Food: The Ultimate Duo

Imagine yourself at a get-together. There is an abundance of food: pretzel, sausages, cornbread, and a little bit of greens. There will be music and dance for your entertainment. But more importantly: There will be beer. Such is the presence of beer and food.

Be it a pizza night, BBQ wings by the poolside, or burger and fries, there’s always chilled beer on the side. If you have received the cue, you know how great this beer food duo is.

Scientifically speaking, there are the undeniable benefits of drinking beer in terms of digestion. Some studies prove that beer stimulates digestion, which helps your stomach break down greasy foods like pizza and burgers quickly.

– For Its Limitless Diversity

It’s a known fact that not all beers are made with the same techniques. A walk in the beer aisle will prove that the majority of beer is mass-produced. But alongside this, there exist a few shelves that display slightly expensive, locally brewed beers, which get to use the designation of craft beers.

This compounded term of Craft Beer is buzzing in the beer market. A craft brewery that brews such craft beer is generally a small brewery that uses traditional methods and ingredients, and the final product is a handcrafted beer. These beers are usually marketed locally.

Despite the small market coverage, these breweries are booming with endless opportunities. This is also due to the culture of endorsing small businesses in recent times. You can almost find all the flavors, from banana bread to Sriracha-infused; there’s infinite diversity. Owing to such contrasting options, people are bound to find the perfect flavor for their beer.

– It Makes You Feel Refreshing

Imagine popping a chilled bottle of beer after a tiring day at work or relaxing on the patio with a cold fizzy beer on a hot summer day. While beer isn’t hydrating when compared with lemonade, due to its low alcoholic content, it will not dry you out. This is because of carbonation.

The sensation of a fizzy beer in your mouth comes from carbonic acid that helps you feel refreshed and unwind.

There are a lot of health benefits of beer that are often overlooked. Following are a few among others:

According to the Clinical Journal of the American Society of Nephrology, a beer that contains hops is rich in phytochemicals that promote kidney health. Therefore, drinking beer in moderate amounts can reduce the risk of kidney stones.

According to the American Heart Association, The soluble fiber in beer has several benefits like promoting healthy blood-cholesterols and lowering bad (LDL) Cholesterol.

More Nutritious Than Other Alcoholic Drinks

According to the Journal of Agriculture and Food Chemistry, beer is rich in antioxidants which contain iron, calcium and fiber, protein, and vitamin B. It’s a win-win.

The Xanthohumol in beer prevents oxidation damage of brain cells, thus slowing down the process of memory degradation. This helps you remember things for a longer period. However, the research is still in its initial stages.

Things To Keep In Mind

However, it becomes important to mention that responsible drinking is advisable. When consumed in moderation, there are no severe side effects of beer. However, drinking beer every day above the set limit can lead to side effects such as confusion, blackouts, nausea, irregular heartbeat, etc.

Since each body functions uniquely, long-term consumption may also lead to dependence and result in severe mental health issues, heart and liver problems. 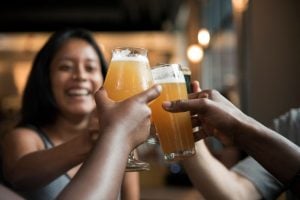 Whether it’s a sports game or hanging out at a local bar, beer has played a deep-rooted role in bringing together communities. We’re in the early stages of a brewing renaissance wherein beer enthusiasts are presented with better choices in terms of flavors and textures that add character to the beer they drink. As beer continues to evolve, understanding the sensory experience associated with it might help people deeply appreciate this star beverage.