For years many people have wondered, “Do Germans drink warm beer?” due to a prevailing myth that has its roots in the 17th Century. The accurate answer is both “Yes” and “No” because, though the Germans don’t drink warm beer, there are seasons in which the Germans prefer warm beer to cold ales. 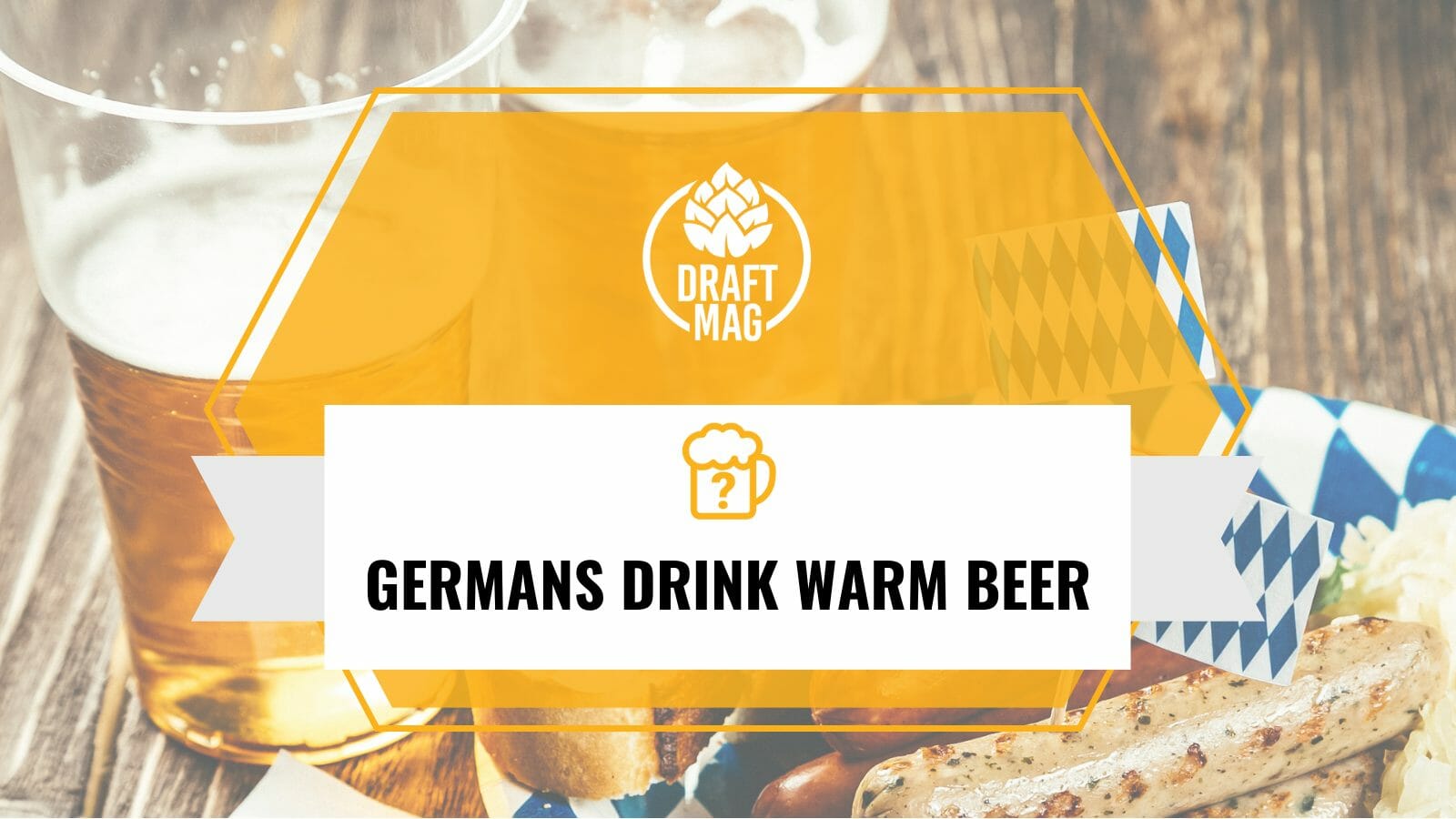 How did the myth begin and why do people still insist, quite contrarily, that Germans prefer their beer served warm? This article will examine the myth and the various answers and give a brief history of warm craft beer in Germany.

Not necessarily; Germans prefer warm beer during the cold winter months for obvious reasons but for the better part of the year, they drink cold beer too. During winter, the Germans brew a seasonal mulled beer called Glühbier and consume it warm to ward off the cold.

The beer is brewed with a dark malt-forward beer such as a doppelbock and with a heated base. However, the myth itself started somewhere in the 17th Century when the Germans began crafting and consuming Warmbier.

– History of Warmbier in Germany

Warmbier was crafted as an alternative to coffee due to its richness and numerous health benefits. At the time, coffee was blamed for many ailments that bedeviled people, especially during their old age, therefore a new drink was brewed to replace coffee.

Warmbier was more of a protein-based concoction than a beer due to its ingredients, which included eggs, butter and flour. It was brewed by heating the malted beer, after which all the other ingredients are added in turns. 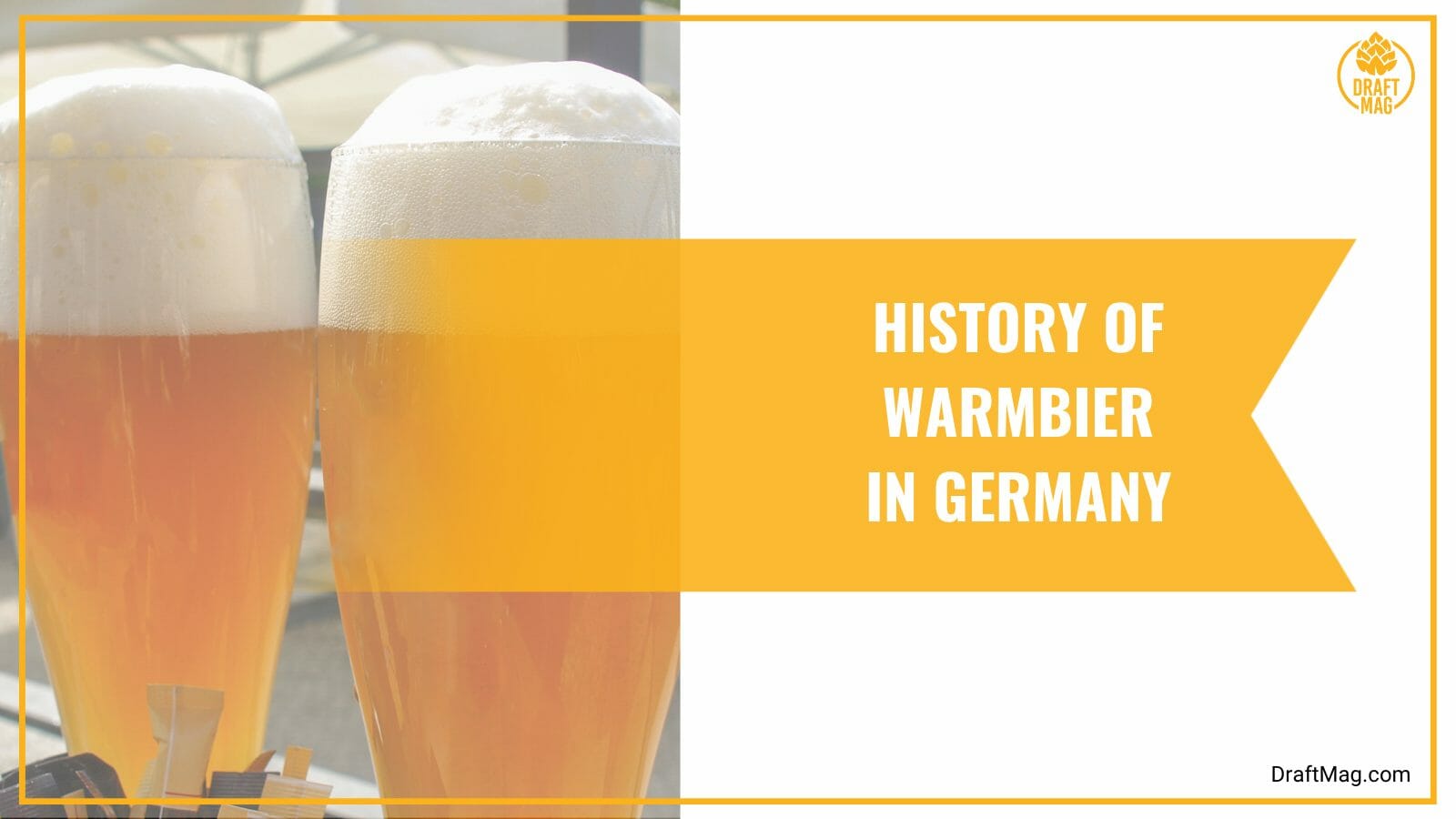 The sud was especially enjoyed by people in their old age as it was thought to boost their energy and lengthen their lifespans. To be honest, warmbier is different from today’s warm beer because while today’s warm beer means heated beer, while warmbier in the 17th Century meant an alcoholic protein shake. Though it is not explicitly stated, it is believed that Warmbier was a precursor to Gluhbier since both ales use the same brewing method. Thus, this proves that Germans have actually been drinking warm beer since the 17th Century.

Warm beer was not only a thing in Germany as history proves that countries England and even the US enjoyed their beers served at room temperature. These suds were consumed at any time of the day and during any season of the year. However, warm beer began fading out of fashion after refrigeration was developed in the 19th Century. Soon, warm beer became a thing of the past, even in Germany, as beer lovers preferred their suds cold as ice.

Germans would, for example, serve Irish stout at 42 degrees Fahrenheit because that’ll allow them to savor the flavor. Light lagers would be consumed at around 40 to 45 degrees Fahrenheit which is warmer than 36 to 38 degrees in the US. The US would serve coffee or chocolate-flavored beer at temperatures between 50 and 55 degrees while the serving temperature in Germany would be between 53 to 58 degrees.

Wheat beers (hefe weissbier) and dark beers are consumed at temperatures between 35 and 50 degrees while they are served between 38 degrees and 55 degrees in Germany. Though the differences in temperatures are not big and can barely be felt on the palate, many still conclude that the Germans drink warm beer. Thus, like everyone else, Germans prefer their cold beers except for winter. However, it is easy to see why many people will think that Germans drink their beers warm.

Germans are more passionate about their beer and consume a lot of it compared to the US. Though both countries enjoy a beer after a long day’s work, it is perfectly normal to see a traditional German taking beer before work or even during lunchtime. In America, this will be a travesty as eyebrows will be raised at anyone who dares to drink beer at lunchtime. Also, Germans can drink beer as much as they’ll drink soda or water and no one will bat an eye if only it is done within reason. 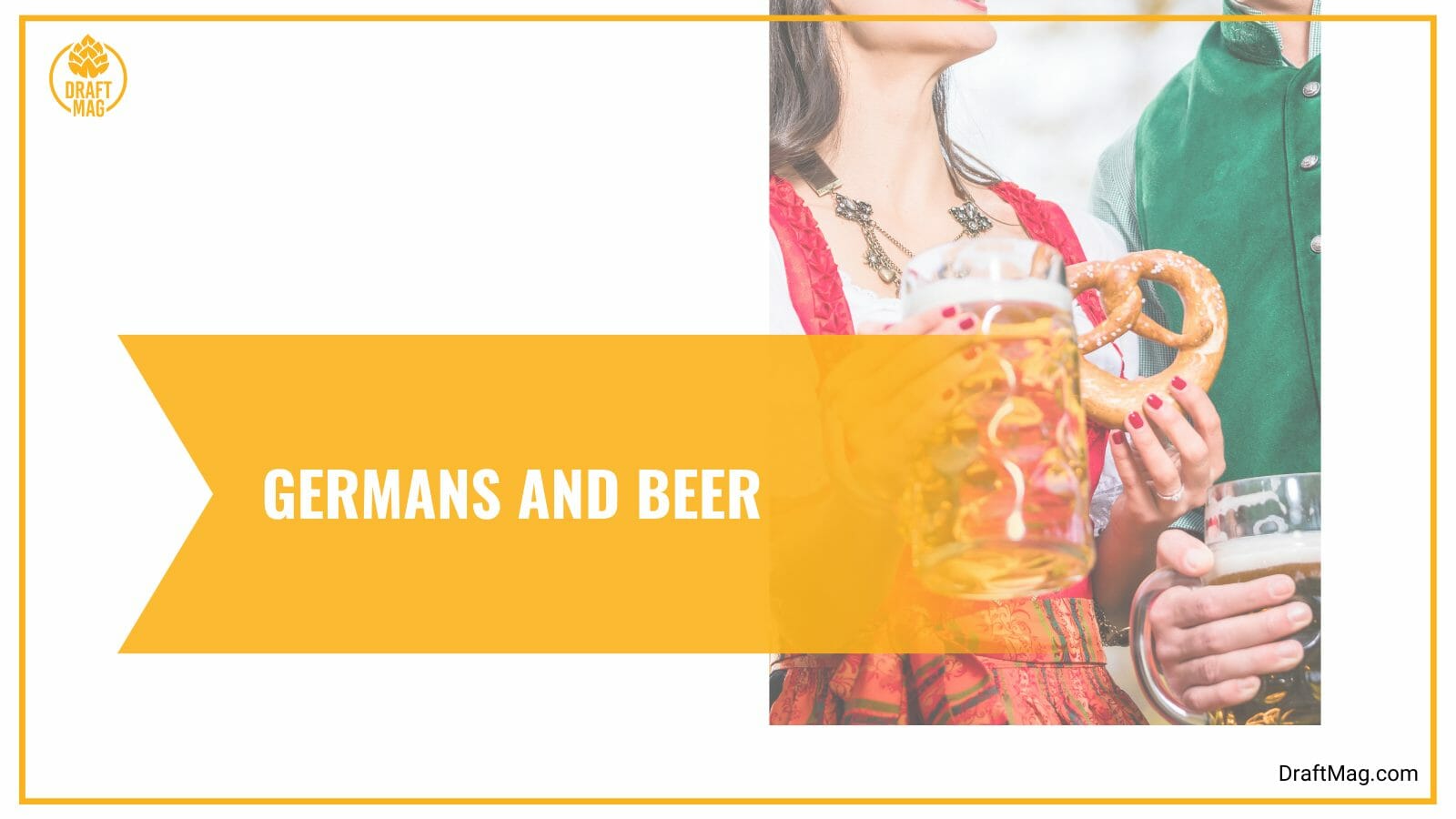 This is different from the US where beer is normally enjoyed after a hard day’s work, during concerts or sporting events, or at a party. The beverage is also not consumed as much as water or soda and anyone who does that is perceived to be having a problem. Also, Germans think that beer should be served at room temperature to enjoy all the flavors while Americans believe all beer should be served cold.

– Warm Beer in the Rest of Europe

Though the warm beer myth was restricted to the Germans, warm beer itself was not, as some countries in Europe enjoyed it and propagated its health benefits. A book from 17th Century England details the health benefits of drinking warm beer. According to the book, warm beer was more beneficial to the human body than that “which is drunk cold.” However, the English do not drink warm beer but prefer an ale which is somewhere between warm and ice cold.

Other countries like Belgium, Austria and Czech Republic like their beer at cellar temperature which is between 45 degrees and 65 degrees Fahrenheit. These temperatures are neither warm nor too cold but are perfect for experiencing all the flavors the sud has to offer. Belgium crafts Iambic suds that use different varieties of yeasts found in nature which may not survive in frigid temperatures. Generally, Europeans think that quality beverages, be they wine or beer, should be served at room temperature to be enjoyed.

They feel that beverages should only be served ice-cold if they are of low quality and their taste is poor. The frigid temperature masks the poor flavors of the sud so that the drinker doesn’t have to experience them. However, beer served at room temperature (which is not exactly warm) helps the drinker to get all the flavors. This is why Europeans say that American beers are served ice-cold because they are of low quality.

Why Did the Germans Drink Warm Beer?

The Germans used to drink warm beer because of its supposed medicinal qualities, which include relieving headaches, aiding sleep, giving good sleep, and relieving symptoms of colds and flu. Some German breweries used to run ads that suggested that warm beer was good for the health during the cold season.

Though this is not scientifically accurate, it is easy to see why many believe such ads. Interestingly, a few scientific facts appear to back the claim that warm beer could help to relieve symptoms of a cold.

Alcohol has been shown to contain properties that help to relieve headaches, thus the alcohol in warm beer was potent to relieve the cold symptoms of headaches. Also, alcohol releases certain chemicals in the brain that promote a sense of happiness and well-being and aid sleep as well. 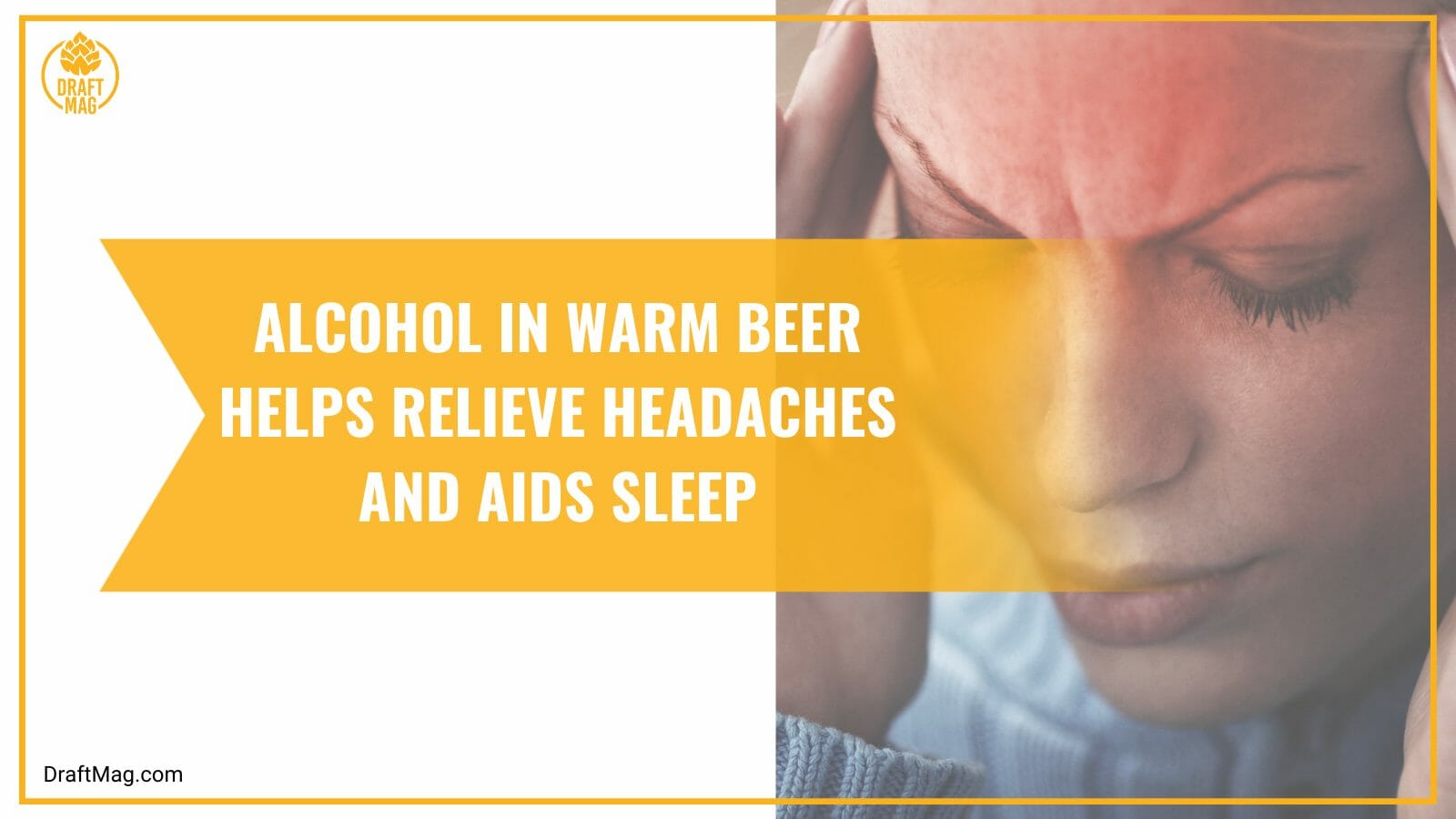 Taken in excess, alcohol could cause one to lose sleep, but sleeping helps in both preventing and recovering from flu.

Aside from the alcohol content, the hops in warm beer also contain certain sedative properties that help to initiate sleep according to research. As already stated, sleep helped cold and flu patients recover faster all thanks to the work of the hops.

Some studies showed that warm beverages helped relieve symptoms of colds such as runny nose, sore throat, sneezing, coughing and chills. Though these studies did not use beer but hot fruit drinks, it is not far-fetched to assume that warm beer could have similar effects.

Therefore, we can now see why the Germans like to drink them during the winter – the season of colds and flu. However, that is not all, as it is believed that hops also contain vitamins that are useful in fighting viruses.

What Is Glühbier, the Warm German Beer for Winter?

Glühbier, which means “glow beer,” is a mulled beer that is considered the brewed version of the popular glühwein (glow wine) which is consumed during Christmas. The ale is typically made with heated malted beer with ingredients such as cloves, sugar, nutmeg, star anise and cinnamon.

Fruit juice is usually added to the mix to sweeten the flavor and balance the acidity. This is a warm mulled beer that the Germans brew for the winter, which has aided the misconception that Germans drink only warm beer.

– The Best Glühbier in Germany

Our pick for the best warm German mulled beer for the winter season is the Liefmann’s Glühkriek – a variant of the rarer glübier. Glühkriek comes in a green bottle but pours a deep burgundy color with a thick head and nice effervescence. The beer has a cherry-dominant aroma with bitter berries and hints of cloves, yeast and oak. The taste features flavors of cherry, apple, and notes of yeast with sour berries to spice up the ale. 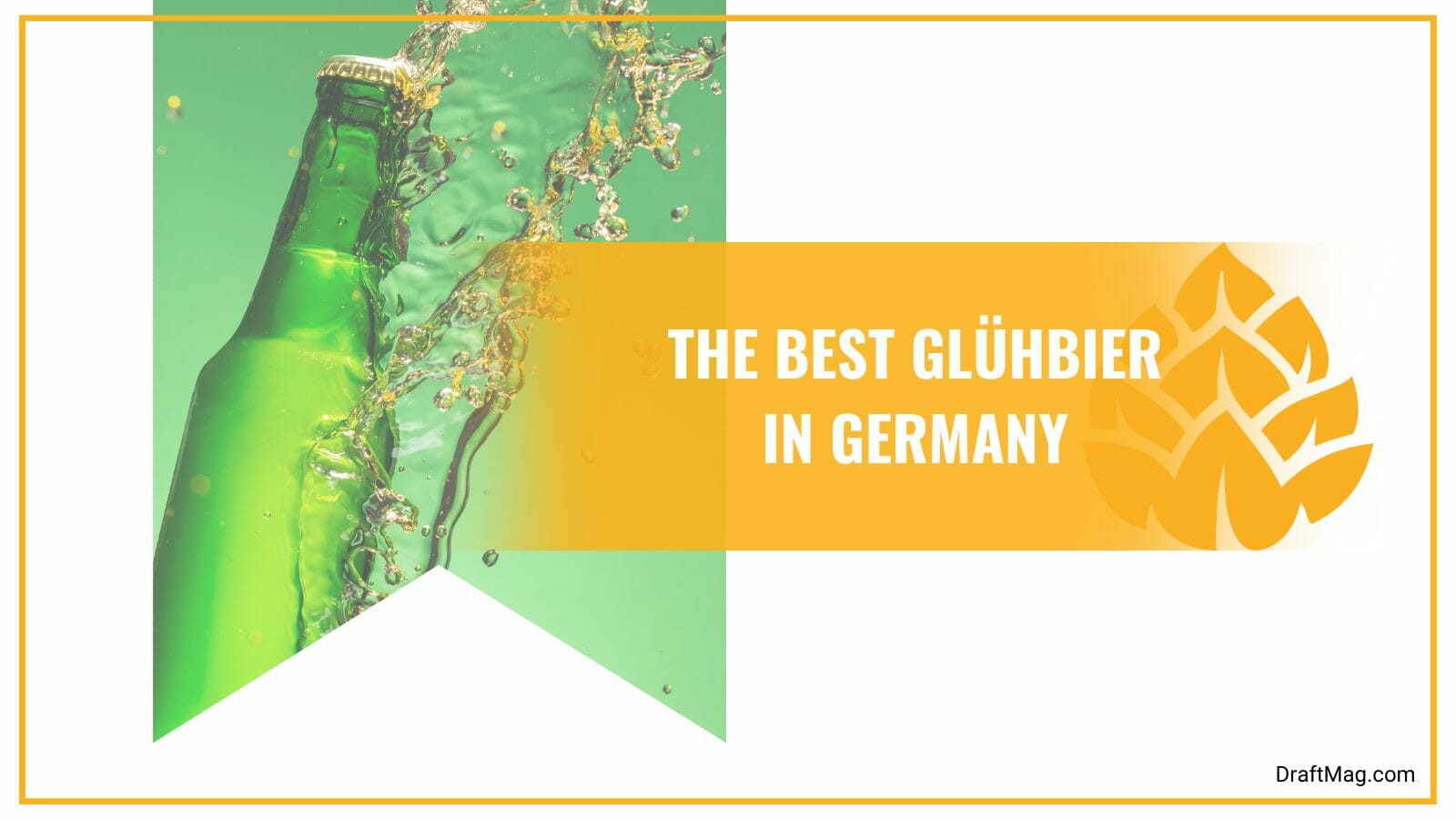 The sour ale has a medium body with high carbonation and an initial slippery mouthfeel which ends with a dry finish. Its ABV is slightly above average at 6 percent, which gives more room for enjoying a few more bottles before you become tipsy. It goes down smoothly and has an initial sweet taste but the aftertaste is slightly bitter. Though it can be enjoyed cold, it is best drunk warm or at room temperature and pairs excellently with fruits or creamy cheese.

– The Most Popular Gluhbier in the US

The tastiest glühbier that has gained notoriety among sour ale lovers in the US is the New Belgium Glühbier, which comes in a 750 mL brown sparkling beer bottle with a cork. It pours a distinctive light brown color with a two-finger long-lasting head that leaves beautiful lacing around the glass.

The aroma of the beer features a dominant malt scent followed by cloves, cinnamon, ginger and nutmeg with hints of apple and cranberry. The flavor follows the nose as malt is heavy on the palate with nuances of ginger, cloves, cinnamon and orange peels.

The New Belgium Glühbier has an 8 percent ABV that can get you giddy after a few bottles. However, its creamy mouthfeel coupled with its dry finish should make the experience worthwhile. It is best enjoyed when it is warm because you can feel all the rich aromas and flavors this sour ale can offer. To enhance the experience, drink Glühbier with fresh lemon and goat cheese or egg-based dishes.

– What Countries Drink Warm Beer Apart from Germans and Europeans?

No country exclusively drinks warm beer, but the temperatures at which beers are consumed may be slightly different from one country to the other. What this means is that most countries drink their beer cold, but the degree of coldness is relative.

This gives the impression that beers that are “less” cold are warm. These countries drink “warm beer” to experience all the richness of the aroma and taste, which could be masked by ice-cold ales. There are also supposed health benefits to drinking warm beer.

– Do They Drink Warm Beer in England?

No, the English prefer to drink their ales at temperatures that are between ice-cold and warm. Practically, no one likes to take their ales warm, but not everyone prefers ice-cold beers. Some prefer their suds a few temperatures higher so they can feel all the flavors in the beer.

Yes, beer was mostly drank warm when it was invented centuries ago, but cold beer took over the market after the invention and development of refrigeration systems. Warm beer allows the person to fully enjoy the taste of the beer, including its subtle flavors.

However, warm beer can be difficult to drink especially if it is of low quality and extremely bitter.

This article has attempted to answer whether Germans drink warm beer or not and has given background information as to where the myth might have come from. Here is a recap of all that this article has discussed:

On the whole, Germans also love their beers cold though not as cold as people in the US would have theirs.