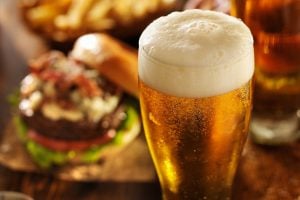 This is the only Hefeweizen beer recipe you wished you had tried earlier. The kind of beer that tastes as good as it looks. It is so beautiful that you just can’t help but brew one for yourself already.

This German wheat beer is everything you are looking for if you are an easy-breezy drinker. It is light, low on bitterness and hop quantities, has clove-like features, and is low on alcohol content as well, which makes it an easy drink.

A Quick Peek Into the History of German Hefeweizen

Mankind has known and brewed wheat beer for as long as brewing has existed. In the 16th century, the Europeans experienced a high rate of inflation. As prices hiked past the bar graph, people tried keeping rye and wheat outside brewhouses, afraid that not enough would be left to bake bread and they would go hungry.

The only exception was the House of Degenberg, in Schwarzach, the only one who had the privilege to brew German wheat beer. Fast forward to the present day, and session beers are an absolute rage. Sure, IPAs and stouts have their place, and can never be substituted, but homebrewers are all over the place about easy recipes, experimentation and discoveries.

– An Overview of Hefenweizen’s Characteristics

This German wheat beer, also known as Hefeweizen, weissbier, and Weizenbier, is an extremely satisfying session beer. The german Hefeweizen is a type of wheat beer from Bavaria, Germany. The term “hefe” means “yeast” in German and “weizen” means “wheat”. So, Hefeweizen technically means an unfiltered wheat beer with yeast in it.

The pouring is cloudy, golden colored with a thick foamy head. With side features of clove, banana, black pepper, and even bubblegum, this is an overall refreshing beer that is easy to drink. This beer contains about 50-60 percent wheat in the mash, making it one of the most protein-rich beers. The wheat percent also defines the distinctly thick head of the beer.

John Trogner, Co-Founder and Brewmaster at Troegs Independent Brewing says, “If you hit fifty to 60 percent wheat, you are 99 percent there.” Whether you are drinking on a hot summer day or by the firepit, this can be your go-to beer.

– Characteristics of a Hefeweizen Beer

How To Brew a Hefeweizen: Follow These Simple Steps

For most homebrewers, the authentic definition of a Hefeweizen beer translates into a yeast dominant beer with a good range of cloves, with a punch of banana by the side. This way, the flavors can support each other. There is a reason why this variety of beer is primarily yeast dominant – its distinct flavors all come from the yeast.

While the Americans call this beer the Hefeweizen, the Germans have it named “Weizenbier” which literally means “wheat beer”. At an alcohol percent range of 4.8 to 5.5, the Hefeweizen is a bit higher than some other homebrews. Typically, the Hefeweizen alcohol content is strong enough to complement its distinct flavors, but light enough to be enjoyed on a midsummer day or a cool winter night.

On the other hand, the prime quality of this beer is that it is unfiltered. The flavors are a distinct result of the suspended yeast. The yeast strains also produce slight fruity esters that highlight banana-like and bubblegum-like flavors. That said, here is the easiest recipe you will ever find on brewing the German Hefeweizen.

– Tools and Equipment Needed for the Brew

These are the Hefeweizen ingredients we will be using to brew the german wheat beer:

– An Eight-step Guide To Brewing a Hefeweizen Beer 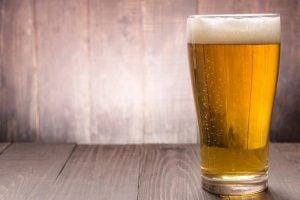 The first step in brewing any beer is preparing the malt. This means, mixing malt with water and boiling the mixture. This initial step, if done right, helps extract the right flavors from wheat grains.

In this recipe, wheat malt extract is used instead of actual wheat grains. Extracts are pre-made grains. It saves the process of milling your grains. This is easier if you are new to brewing and might go wrong in the milling process.

For the malt, fill your brew pot with clean water. Place it on a stovetop and bring it to boil. Add half the liquid wheat malt, turn the heat off and thoroughly stir the wheat malt in. This mixture is called the wort which is now going to be ready for the fermenting process.

Hops bring in the bitter characteristics in a beer. Higher the hops, more the bitterness. There are many hops to choose from. But for this particular beer, we will use lesser bitter hops with a low alpha acid content. The bitterness here is minimum to maintain a good balance between the bitterness and the fruity flavors of the beer.

Here, we choose the Hallertau hops. It comes from Hallertau, Germany. The flavors are mildly floral and citrusy.

Turn the stovetop on and add the hops. Set a timer for 60 minutes. 45 minutes into the boil, pour dry wheat malt extract and the remaining liquid malt. Boil the wort, malt, and hops together for the last 15 minutes.

The temperatures in the brewing process matter most. Take the wort off the stovetop and cool it down to 45-55 degrees Fahrenheit. Using a wort chiller is best, but if you don’t have one handy, you can always fill the sink with ice-cold water and keep the pot in it. It is like giving the wort its own ice bath in the kitchen sink.

Maintaining the temperature is important at this point as the next step is to pitch the yeast into the wort to start the fermentation process.

While the wort is chilling (this will take time), you can move over to cleaning and sanitizing all the equipment you will be needing from this point forward. Everything you use in the fermenting process should be cleaned and sanitized to get off any microbes. The fermenting bucket, spoon, siphoning equipment, caps, bottles, stoppers, etc.

It is always a good practice to increase the volume of the wort. The higher the wort, the better the result.

Add 2 gallons of cold water to the fermenter bucket. And transfer the cool wort into the same bucket. Measure the gravity of the wort using a hydrometer.

This step is the most important in the entire process. Especially when we talk about German wheat beer. But before adding the yeast, aerate the wort. Then cut the packet of yeast with clean sanitized scissors and pour the yeast into the solution. Put a lid on the container and lock the bucket.

After adding yeast, move the bucket to a warm, dry place, away from direct sunlight, and allow the fermentation process to take place. The ideal temperature range we are looking at here is 65 to 75 degrees Fahrenheit.

In this process, the yeast will ferment the wort and break it into carbon dioxide and alcohol. Store the container for up to two weeks aside in a cool dark place. Once fermentation is over the foam that forms over the beer, bubbling will stop and the beer will gravitate more. Now the beer is ready to be consumed.

If you have come this far, you are now done. Excellent work here. Your Hefeweizen is now ready to drink. The final step is bottling the beer. Start with sanitizing the bottle, cap, and bottling equipment.

One last step right before bottling is to add cornstarch for carbonation. Add ½ cup corn sugar to water and bring to a boil. Cool the solution and then add it to the bottling bucket. This step is important, as carbonation gives the beer its final tangy, crispy mouthfeel.

– Extra Tips: Some Expert Tips That Come in Handy While Brewing

You can always invest in a starter kit for your Hefeweizen beer. The kit comes with the necessary equipment, ingredients, hops, and yeast. It is a simpler solution for beginner homebrewers.

– Hops for Hefeweizen: These Are the Hops Options You Can Use

There are many hop options available for a Hefeweizen brew. Since this is a German wheat beer, it is best advised to use German hops like:

As a substitute, Liberty or mount hood can work. There should be a good balance between the hop bitterness and sweetness. It is best to target an IBU range of below 12 to crack the right balance.

The classic combinations of wheat barley and yeast bring in the prominent flavors of a Hefeweizen beer. It typically pours pale, golden yellow with a long-lasting head. The dominant flavors are banana, clove, vanilla, and a tinge of bubblegum. The high carbonation levels are one of the reasons why this beer is a refreshing summer drink.

While a Belgian-style witbier gets its characteristic citrus and spice flavors from a physical addition of orange or coriander, there are no adjuncts added to a Hefeweizen. This is the perfect drink to chill with by the fire and on a hot summer day too. Brew your Hefeweizen now!

Imperial Stout Recipe: It All Started With a Czar’s Interest