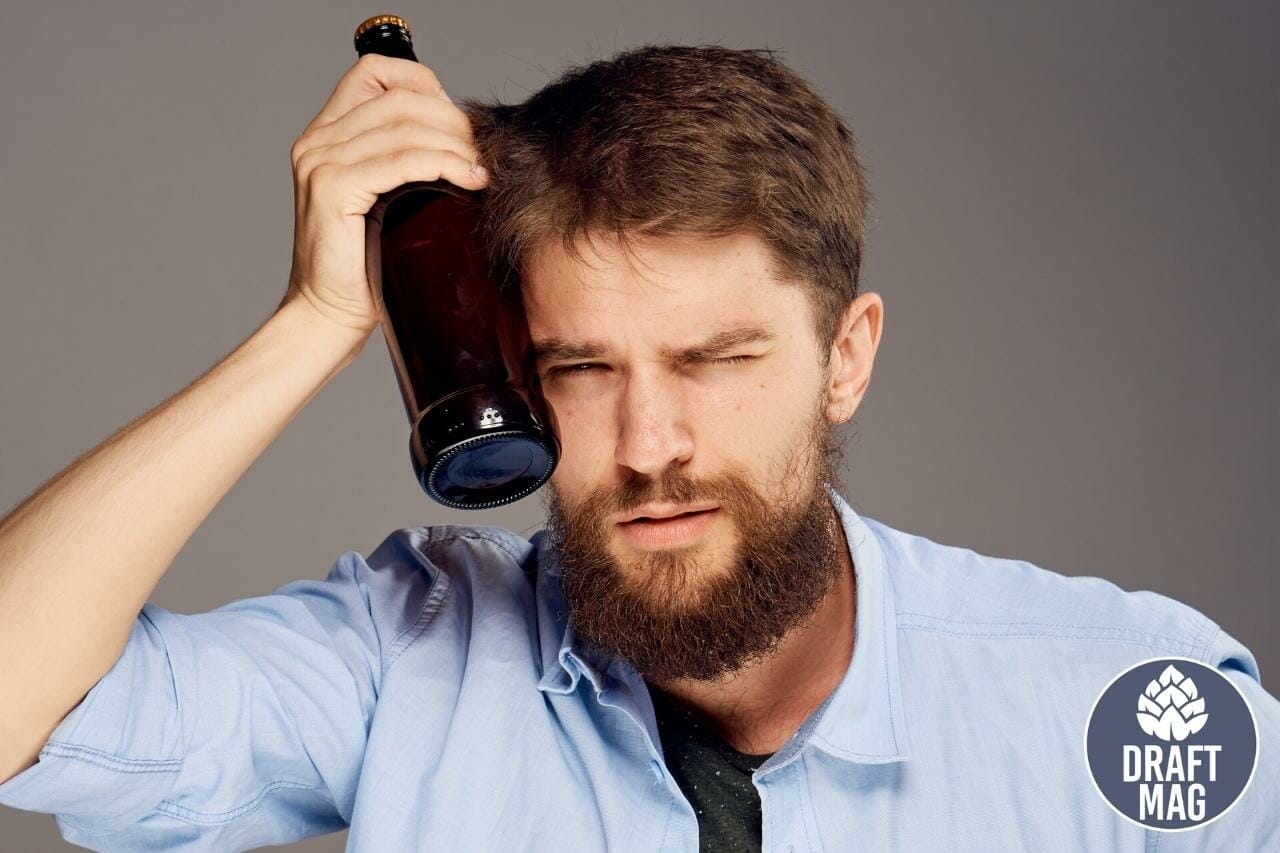 Beer headache is quite common among people across the globe as headaches are actually a reminder of our overindulgence. Nothing makes a social gathering more enjoyable than a glass of beer!

Whether it is a bar, restaurant, pub or baseball game, beer is an integral part of gatherings.

If you are worried about having a headache and missing out on all the fun your mates are having, read on to get to the root cause of this problem.

Why Does Beer Give Me a Headache?

Drinking beer or alcoholic beverages relaxes your blood vessels, leading to an increased blood flow to the brain and blood vessel dilatation, which is the cause of an instant headache when drinking beer. Your chances of getting a headache increase manifold if you are susceptible to migraines.

Drinking beer is undoubtedly an enjoyable experience, but the problem arises when you have a splitting headache the following day!

Let’s get into the real causes of this phenomenon:

Alcohol triggers approximately one-third of the migraines in people worldwide. Certain by-products found in alcohol (beer’s primary ingredient) such as ethanol, histamine, congeners, etc., act as catalysts for migraine attacks. For example, once ethanol enters your bloodstream, it releases a chemical that gives you a pleasing feeling and lessens your inhibitions.

As more ethanol enters the membrane of your nerve cells, it has a sedating effect. Acetaldehyde, which is formed as a by-product of ethanol metabolism, is also very harmful to our bodies.

As a natural diuretic, ethanol causes blood vessel dilatation (vasodilation), which expedites minerals and fluid loss from the body, triggering a headache. At the same time, alcohol produces more chemicals and hormones such as histamine that boosts inflammation. On the other hand, though having very low content levels in beer, congeners are responsible for delayed headaches.

Generally speaking, a high-quality homemade beer has the right amount of fusel alcohol, but this is easier said than done!

It is very difficult for an average home brewer to predict the amount of fusel alcohol in a homebrewed beer.

Components such as flavonoid phenols, tyramine and tannins are also found in some food products such as cheese, processed meat, fermented foods and beverages, dried fruits, etc. Those susceptible to headaches due to any of the above foods are also more likely to suffer from a beer headache.

In general, tap beers cause more headaches than bottled beers because these are less hygienic than beer that is served in individual bottles.

Draft beers or tap beer are the type of beers that are directly emptied down from a tap into a pint of glass. On the other hand, beer in bottles and cans is stored in sealed packaging. Beer experts say tap beer has more flavors than bottled beer, which is more popular among pint lovers. However, bottled beers score more on portability and hygiene than draft beers.

The presence of ethanol may not be single-handedly responsible for beer headaches because it’s also the poor hygiene associated with it while consuming tap beer.

There is a possibility of bacterial growth forming on the nozzles or outlets of the taps if they are not cleaned at regular intervals. Moreover, the lager may also develop a lot of disease-causing germs that can cause many health problems, including headaches. Also, if the glassware is not cleaned properly, drinking beer in dirty glasses may lead to health issues.

The ABV content of beer is responsible for an adverse effect on the brain, liver, kidneys, heart, stomach and other body systems. Although one might feel relaxed and happy after a few drinks, the after-effects are visible soon after that.

Your vision blurs, your perceptions become unreliable, and you become uncoordinated and disoriented. The speech begins to slur, and you cannot think straight. More severe symptoms may include vomiting, hiccups, lethargy and blackouts.

There are two main types of beer headaches:

This kind of headache, also known as a hangover, usually occurs 5-12 hours after consuming beer or any other alcoholic beverage. This is usually similar to any other tension headache or migraine. Studies reveal that genetics may be a probable cause of such headaches. 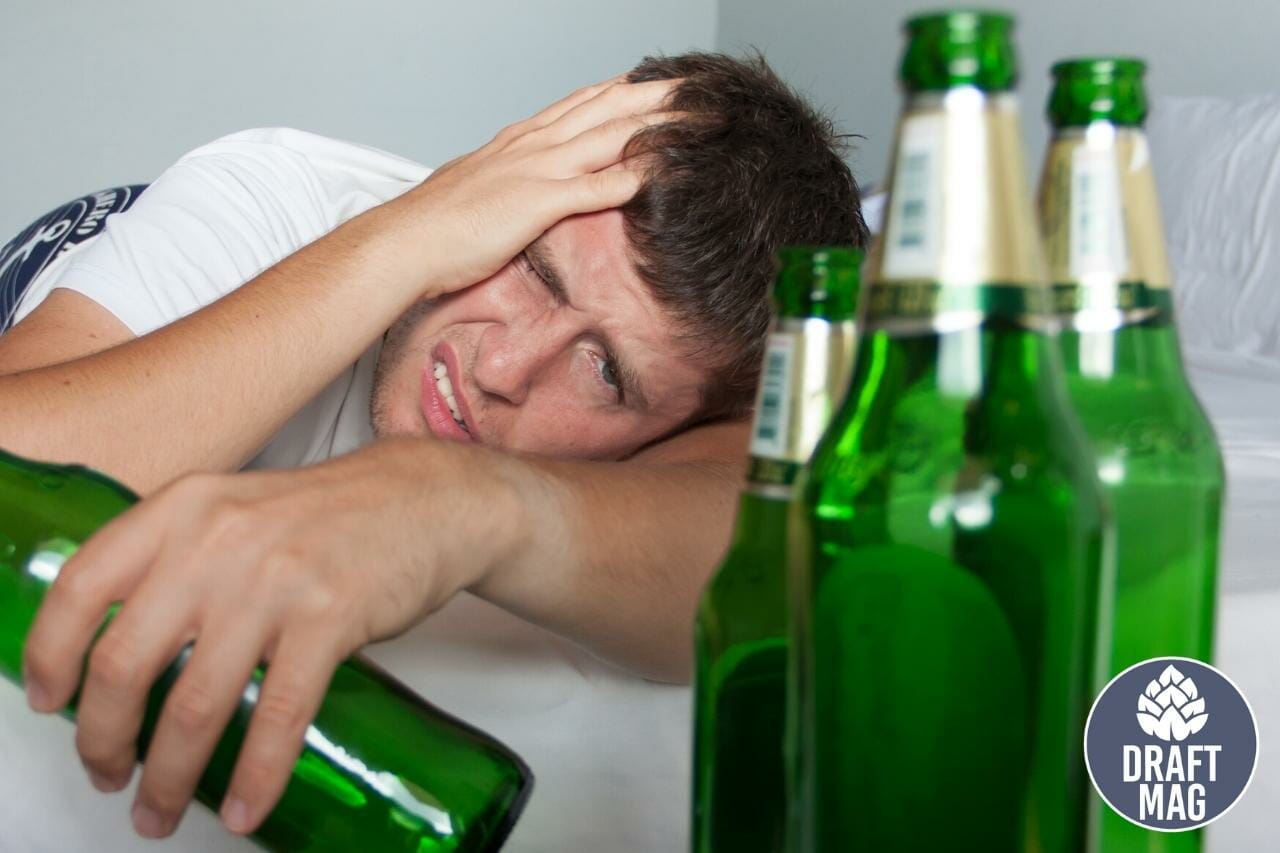 Better known as the Cocktail headache, an immediate alcohol-induced headache occurs immediately or within 3 hours of consuming alcohol and goes away within 72 hours. You know that you have this problem if you feel a throbbing or pulsating pain on both sides of the head, which aggravates any physical activity.

Know Your Limit — How Much To Drink

The following factors play an essential part in determining the safe amount of alcohol for you.

Generally speaking, five to eight drinks are enough for an average man, while women can consume somewhere around three to five drinks. The specific effects may vary on the personal capacity of the person.

Drinking beer can cause an awful headache, but the question arises of how many beers will cause a headache? Well there is no specific answer to this. Some people may not get a headache at all, while others may experience a much worse headache after one beer!

It depends on many factors such as:

Beer causing headaches is common for people prone to migraines. At the same time, people who drink alcohol regularly or take medicines that affect liver enzymes may have fewer problems after consuming alcohol as their body metabolism is better. However, certain medicines may have a worsening effect on the body.

Another factor to consider when talking about this topic is how fast you drink. The more you chug your beer, the more rapidly alcohol is absorbed in your body. Most of us can manage to break down one drink per hour.

Also, scientific studies reveal that darker beverages like whisky, brandy, strong beer, etc., cause more problems than light lagers or other clear drinks when gulped down.

Don’t try to drink more than you are comfortable with. Use your experience and listen to your body. The easiest way to determine this is to test yourself under controlled conditions. Drink a glass of beer and wait for 30 minutes to 3 hours to gauge its effect on your body.

If you tend to develop a headache after drinking beer, you will see a reaction within this time since beer-connected headaches and migraines usually begin during this period. The delayed alcohol headache or the hangover is visible the next day. This hangover can rapidly evolve into a full-blown migraine that is difficult to control.

Prevention is always better than cure!

Approximately 92 percent of the population of the United States has suffered a headache from drinking beer at least once in their life. If you are also one of them, you can prevent this horrible situation. If you know that you tend to get a headache after consuming alcohol, it is advisable to take some preventive measures such as:

Treatment for a Beer Headache

Beer and headaches need to be regulated before it becomes a nightmare. There is no substantial scientific evidence about any substance that is effective in curing a hangover. However, many unproven studies might work for some of you.

Some studies state that tolfenamic, an anti-inflammatory drug, is known to be somewhat helpful in curing hangovers. Taking Vitamin B6 before drinking might also work for some people. N-acetyl cysteine also helps in detoxifying the body from acetaldehyde build-up.

The best treatment for a beer headache is preventing one in the first place.

The following strategies may also be applied:

With all that said and done, light exercise and staying hydrated are the best options that do not have any unwanted side effects. 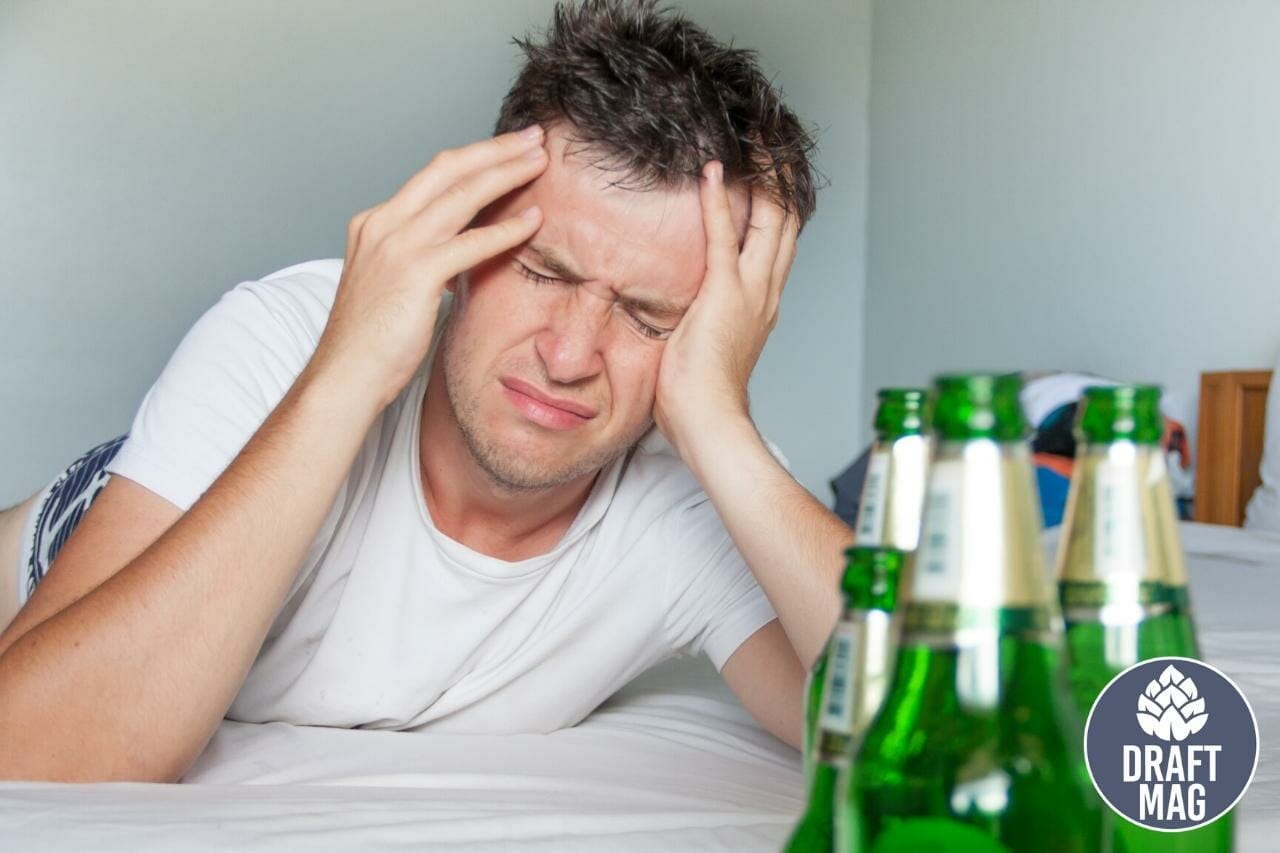 If you suffer from an occasional bout of beer headache, drinking in moderation may be the key. Try to strike a balance rather than try abstinence, as it might be a more reasonable approach.

Remember, the best prevention of a beer headache is not to drink at all, and the best cure is time! Make smart, healthy choices and take good care of yourself!