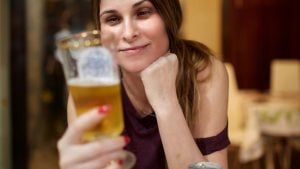 The proper way to drink beer is widely debated among enthusiasts and beer lovers, while some people don’t know that they can drink beer the right way. You might think you’re enjoying the beer now, but you can get a complete experience aside from the taste.

From choosing the right glass and pouring your beer to drinking it, getting the best taste from your refreshing drink is all in the details. If you’re new to drinking beer and want to start it the right way, or you want to change your ways, you can start with our complete guide.

How To Drink Beer: Steps to Take Before You Start Drinking Beer

When getting started with drinking beer, there are three things you need to put in place. You will need the beer, the glass and the right food to pair with drinking your beer.

There’s a wide range of beers you can choose from, which means that you can conveniently find out that would meet your taste. You can go for ales, which are full-bodied, sweet and fruity, nor lager, offering less hops and more crisp. Indian Pale Ales are also very popular nowadays, known for having more hops and a bitter taste.

Some other types of beer include stouts, wheat beer and bitters. If you want to drink beer for the first time, you can get started with ale and move to other types. But if you’ve been drinking beer all this time, choose your favorite type.

You also need to eat while you drink alcohol, which means choosing the right meal that goes with your beer. Lighter beers are well-matched with lighter food like fish and salads. On the other hand, if you’re drinking dark and heavier beers, then meat and heavier foods is a good choice. If your beer is very hoppy, you would enjoy eating fattier foods, while fruity and sweet beers go with appetizers more.

You can’t just take your drinking beer bottle and assume you’re all set to go. Instead, you need to have the right glass for whichever type of beer you’re drinking. Some beer cups include pint, pilsner, mug or goblet.

Now that you’re all set, you can move on to pouring your beer into the cup based on our recommendations.

– Pouring Your Beer the Right Way

If you’re drinking beer at a bar, you might not notice, but the bartender will pour your beverage in a particular way. But if you plan on drinking beer at home often, it would help to learn how to pour it properly.

Pouring your beer improperly can lead to having too much foam or no foam at all. In general, your beer can be too gassy and you won’t enjoy the taste, or the morning after. This is because with no foam on your beer, you left all the carbon dioxide, which would lead to a stomach ache and bloating.

However, when you pour your beer the right way, you will maximize the full taste, texture and look of your beer. You’re already halfway to drinking your beer properly once you get this covered. 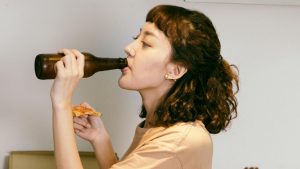 When buying your beer, you should choose that which has been stored in a dark and cool location. Also purchase the cups you need, as you won’t drink beer from a bottle. Beer should be stored in a constant temperature between 50 and 55 degrees Fahrenheit, direct heat and sunlight.

Ensure that your glass is clean before pouring the beer in it. If it contains oils or grime, or it was used for other beverages like milk, then it would affect the taste of the beer. Even if it looks clean, you should run your cup under hot water, using soap and water. Then, inspect it before you use it.

Next, set your beer glass at a 45-degree angle and pour the beer in. This would give you about one-and-a-half-inch of the foamy head, as the beer would flow down the middle of the side of the cup, aerating as it goes. If you have the right amount of foam on your beer, it becomes even more delicious and has a strong, attractive aroma

Now that your beer is half full, you should set the cup straight slowly and pour the beer right into the class. This reduces the head so you don’t have too much. If your foam isn’t forming, remain at the 45-degree angle until it does. But if it is foaming too much, don’t wait till it’s half full to set the glass upright.

Tasting The Beer With All Your Senses

The best way to drink beer is to do so with all your five senses. It’s not enough to gulp it down immediately after pouring. Instead, you should take it in with your eyes, nose, and tongue.

– The Look and Swirl

Once you have your foamy glass of beer, start by looking at it. This is especially for beginners who might not know how to differentiate beers by their appearance. Appraise the body, color and head of the beer, so that you know to get this kind again if you enjoy drinking it.

Whenever you get a glass of wine, it’s normal practice to swirl it before drinking it. This is the same in the case of beer. Swirl it around in the glass and it would send the fragrance and aroma around which is pleasant on the nose. It would also check if you got the head right, and if you didn’t, it would slowly disappear.

The next thing to do is smell it after the swirl. The aroma of the beer would definitely influence and even amplify the taste, giving you a much better experience.

Depending on the beer, you would taste fruits, chocolate, bread, malts, and other scents. You should also take a whiff through your mouth.

Now, you can taste the beer. Start with a sip and let your palate feel it before you swallow. Allowing the beer to stay on your tongue for a while would help you to tolerate beer, as the taste might be unfamiliar for beginners. You should take note of every flavor you feel when you sip your beer, whether it’s salty, sweet, warm, or hoppy. You should repeat this a few times.

Once you feel used to the beer, you can drink up. Leaving your beer for a while would cause it to become warm and stale, which is why it’s better to drink from a cup and not a bottle. If you enjoy everything that this beer offers, you’ll want to do this again.

When To Drink Beer

Beer lovers know that they can’t drink this all the time, regardless of how much they enjoy the taste. While your favorite beer might be delicious at any time, alcohol is best consumed in moderation.

Firstly, you shouldn’t drink beer right before you sleep. Instead, it’s best to have a few glasses about four hours before you sleep, keeping a gap between drinking and bedtime. While beer has a way of lulling you to sleep, it will take a while before your body can process it and the quality of your sleep will be affected.

Also, it might seem okay to drink a glass of beer or two in the morning, this is unadvisable. You would end up with a hangover in the afternoon except you keep drinking the beer, and this is harmful to your health.

This can also lead to addiction, or increase your chances of developing a liver disease or alcoholic dementia. Regardless of the reason, avoid drinking beer in the morning.

But, once the clock strikes noon, you can have a few glasses of beer. Beer is also best drunk in later afternoons and early evenings. If you’re the only one drinking, then two bottles per day is the moderate amount, especially to protect your health.

Another good time to drink beer is after you eat. Drinking on an empty stomach would adversely affect your health and also make you drunk faster. So if you’re planning on drinking, you should have lunch or dinner first. You can also have some beer snacks close to you to eat while you drink.

The best thing about beer is that they’re great for all seasons. Breweries usually release seasonal beers too, if you want something that fits the weather. During spring, you can expect hoppy beers, with citrusy and fruity flavors which are easy to drink. As summer arises, the beers become lighter and drinkable to quench your thirst and make you drunk slowly.

You can expect darker beers during the autumn months, with spicy and earthy hints on your palate. Then as winter comes, the beers become thick and warm, with dark and sweet flavors to keep you comfortable. If you get used to drinking beer now, you can enjoy all the flavors as the seasons go by.

If you’re already a beer drinker but you didn’t know the right way to do so, chances are you’re doing a couple of other things wrong.

Unlike what you might have heard or thought, not all beers should be drunk cold. If you want to get the maximum taste of your beer, it’s advisable to keep it in the fridge for about ten minutes before drinking. When it’s too cold, it covers up the flavors and aromas.

Exposing your beer to the sun before opening it can lead to skunking, and once you open it to drink, you’ll realize it smells weird. Don’t buy beer that has been stored in a way that exposes it to the sun. Instead, go for those in a cool and dry place.

Unlike popular opinion, frosting your glass before drinking beer does not give you the best drinking experience. Instead, it would lead to more foam than usual, killing the aroma and carbonation. You should only ensure you’re using the right cup, and check if it’s completely clean before pouring.

If you have a precious bottle of beer, chances are that you keep on waiting for the right time to drink it. But, the flavor and taste of beers age faster than other alcoholic drinks and once you pop it open, it tastes different from what you’re used to. So drink your beers quickly, rather than storing them for a long time. 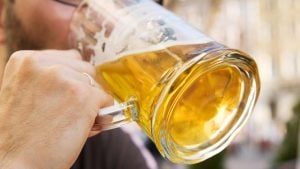 With this important information, you can start drinking your beer better than you used to. Once you decide on the type of beer you want, you can take your first glass with your meal or while relaxing with friends.

Step into the store of your choice to get the best beer for you, and start drinking it right.