Warm beer used to be the norm because when beer was first discovered, there was no refrigeration and therefore the suds were consumed warm. Today, drinking hot beer is unthinkable as most patrons prefer their ales cold. 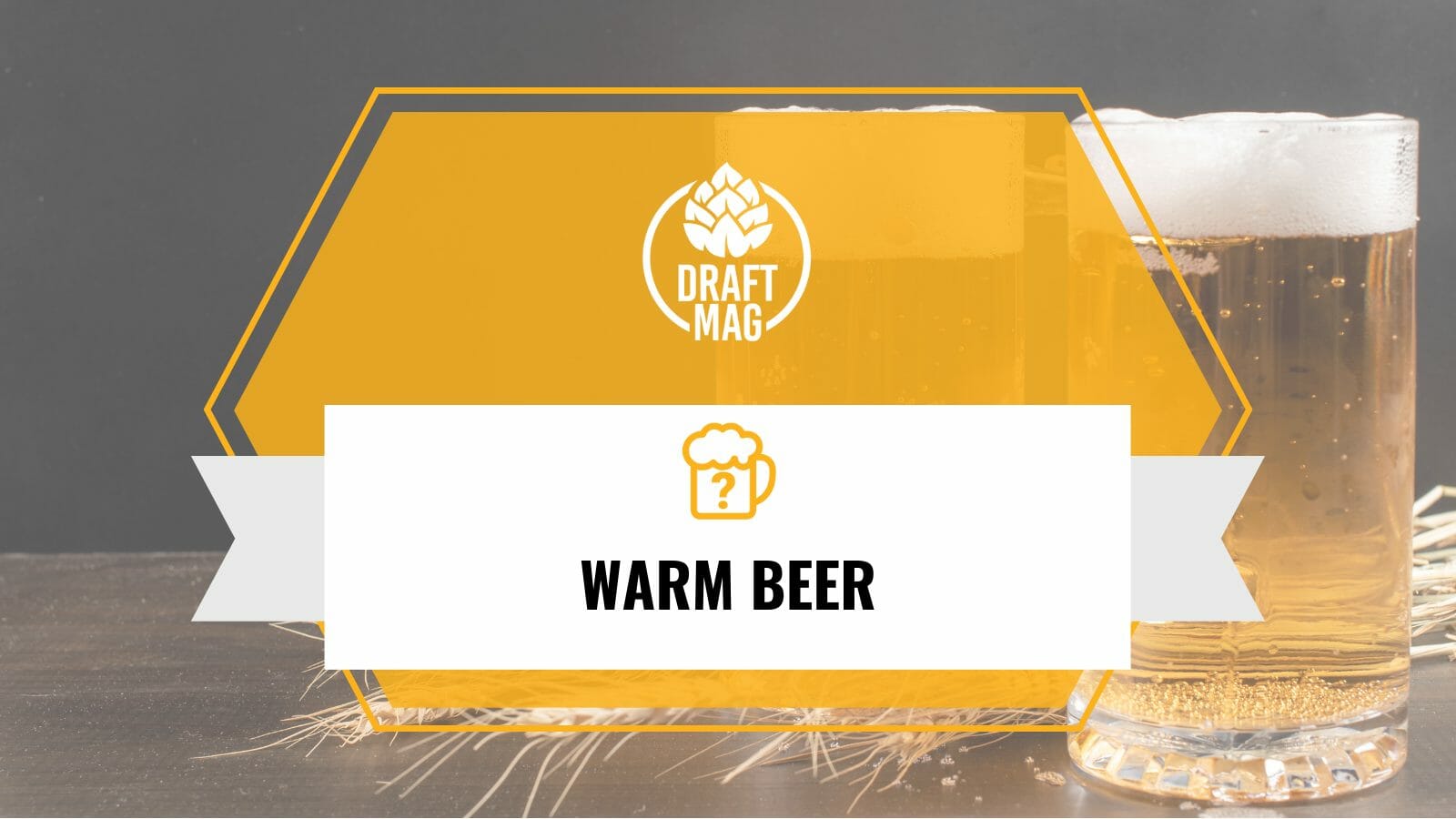 The term “ice-cold beer” is used by many beer companies and patrons across the globe and it has become synonymous with the product, but what is warm beer?

Keep reading as we discover the roots of beer and find some brews that are best drank warm.

What Is Warm Beer?

As the name suggests, warm beer is a beer that is chugged while its temperature is still warm or at room temperature. Before the advent of refrigeration systems, patrons enjoyed their beers warm. If you want to enjoy the full flavors of ale, then warm beer is preferable.

– Why Do People Drink Warm Beer?

People usually drink warm beer because it is known to aid in digestion and because warmer temperatures bring out the more subtle flavors of the brew. In fact, serving beer warm rather than cold is ideal for more complex brews.

In the old times, beers, especially the homebrewed ones, were heated because of the substandard ingredients and techniques used in brewing. It was believed that the homebrewed beer contained impurities that made it undrinkable, thus heating it removed all of the impurities.

Patrons also added spices during heating to enhance its appeal. Sometimes, they added sugars to caramelize the beers and give them a more rounded flavor.

The best beer styles that are enjoyed warm are Pale Ales and Imperial Pale Ales (IPAs). This is because both styles use lots of hops with IPAs making use of more hops than Pales Ales. Thus, a warm temperature is ideal to help the taste buds relish every flavor that was used in brewing the beer, including the hops. 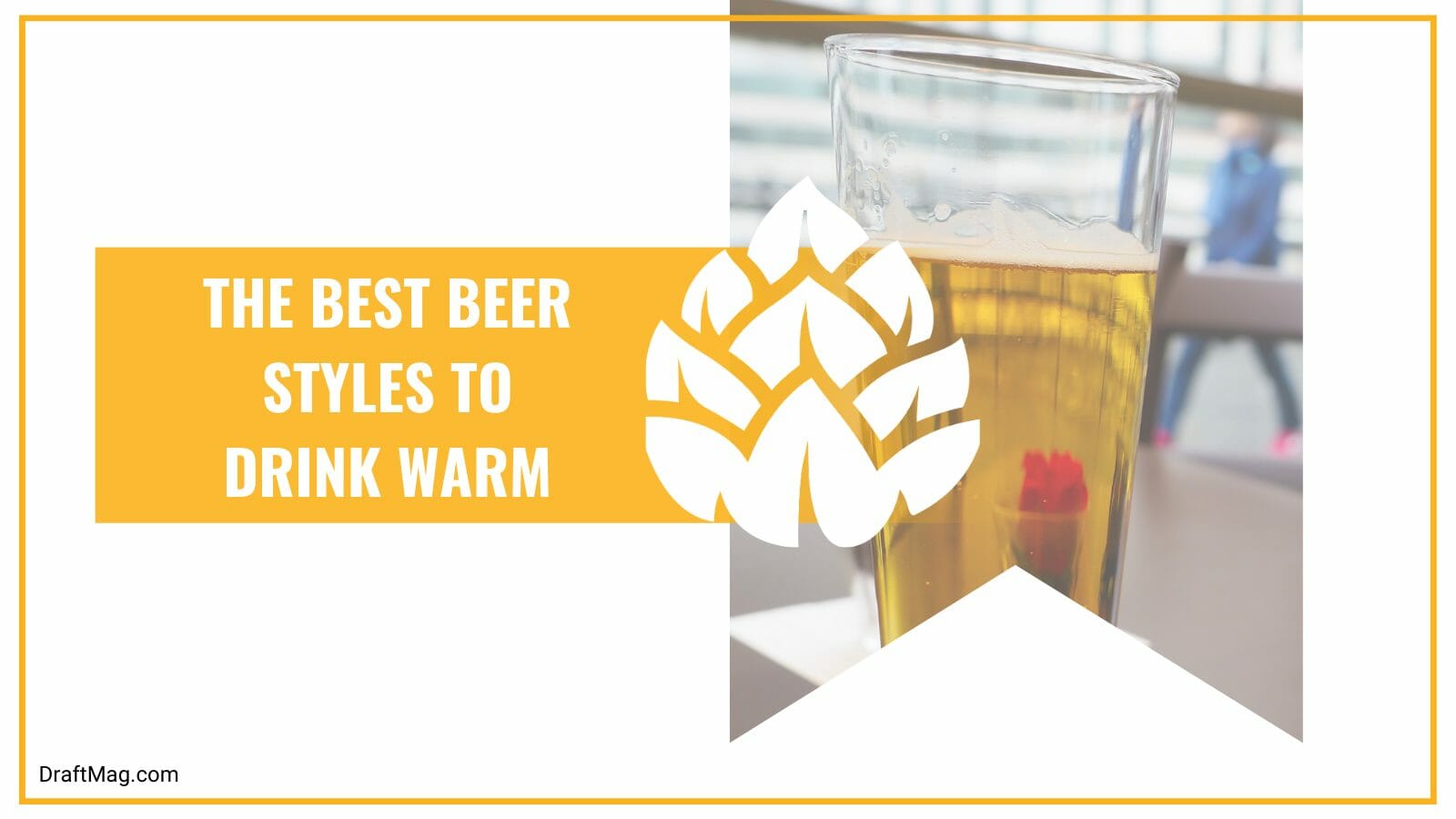 However, there’s a catch – if you are not a fan of hoppy beers but want to have a taste of what they’re like, then you can refrigerate them.

Refrigerating or serving IPAs ice-cold should reduce their bitterness to the level that you can drink, but the downside is that you might miss out on some subtle flavors. Unfortunately, not every type of beer is meant to be consumed ice-cold.

Another beer style that is enjoyed warm is the Oud Bruin, which has its roots in Belgium. It is a sour dark ale that has an IBU between 15 to 25 and an ABV between 4 and 8 percent.

Imperial Stout beers are also perfect when served warm because one can indulge in the full flavors of hops, malts, roast and fruity esters. However, take note that not all beers are enjoyed warm. Sweet beers are best served cold because the sugary content may give heart burns and ruin the drinking experience.

With that being said, sweet beers are meant for the heat of the summer and the warmth of spring, thus drinking a warm sweet beer on a hot summer afternoon may not end well.

So how did beer go from being served warm to ice-cold? Here is a summary of our favorite beverage’s journey through the years.

It is difficult to establish the exact time or period in which beer was invented but existing records indicate that the beverage was brewed during the time of the Sumerians. Scholars date the period to around 4000 BCE after they found a table that had an illustration of people drinking beer from a container.

Later, archaeologists found another tablet that featured a poem in honor of the goddess of brewing, known as Ninkasi. The poem narrated how the ancient Sumerians brewed their beer with barley derived from bread.

Next, scholars discovered records that indicated that the Babylonians drank war beer in 3000 BCE. According to the evidence, the Babylonians brewed beer in at least 20 different styles. It was believed that beer was only consumed by the high and mighty in Babylon and thus was a sign of wealth. Warm beers were thought of as a gift from the deities and were consumed with much reverence. 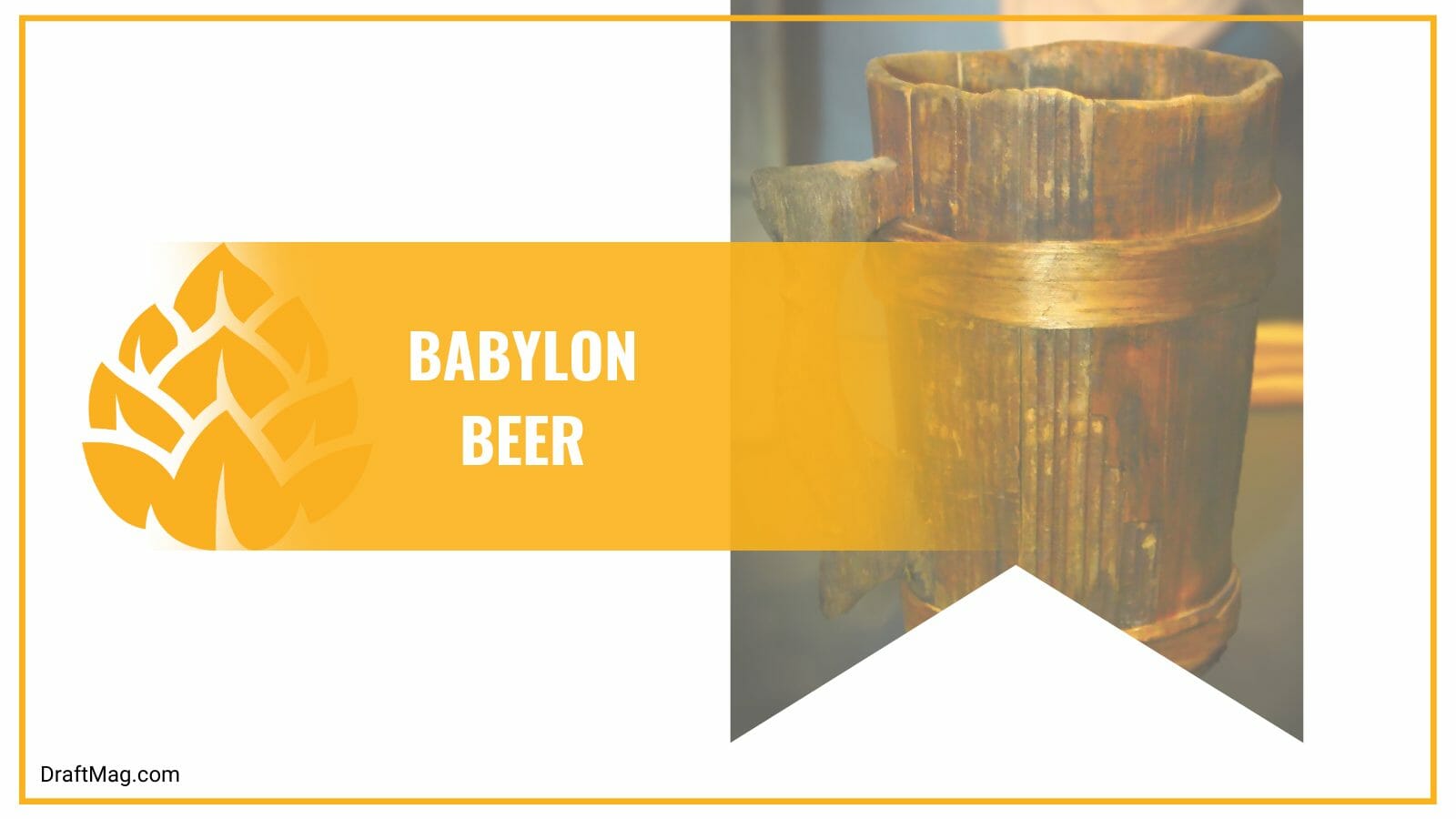 So revered was beer that some Babylonians accepted them as payments. Babylonian suds were thick and hard to drink. Thus, the people of Babylon were among the first to use straws in drinking beer.

The Egyptians also revered beer and had a special deity to oversee its production, distribution and consumption. The name of the goddess was Tenenit, whose root word was tenenum, one of the words for beer. The Egyptians did not like the bitter taste that came with beer, thus they did all they could to make it less bitter. According to records, the most common beer in ancient Egypt was flavored with honey and named Heqet.

Like the Babylonians, workers in ancient Egypt received warm beers as wages. Beer was even discovered in the tombs of some Egyptian pharaohs as it was believed that they will drink warm beer in the afterlife.

Beer In Greece and Rome

The Greeks and the Romans were the first to introduce warm beer to modern Europe. The Greeks were the first to be influenced by Egyptian brewing techniques. Scholars came to this conclusion from the Greek word for beer, zythos, which was similar to the Egyptian zytum. However, beer was less popular as the Greeks preferred wine and even had a god dedicated to wine. 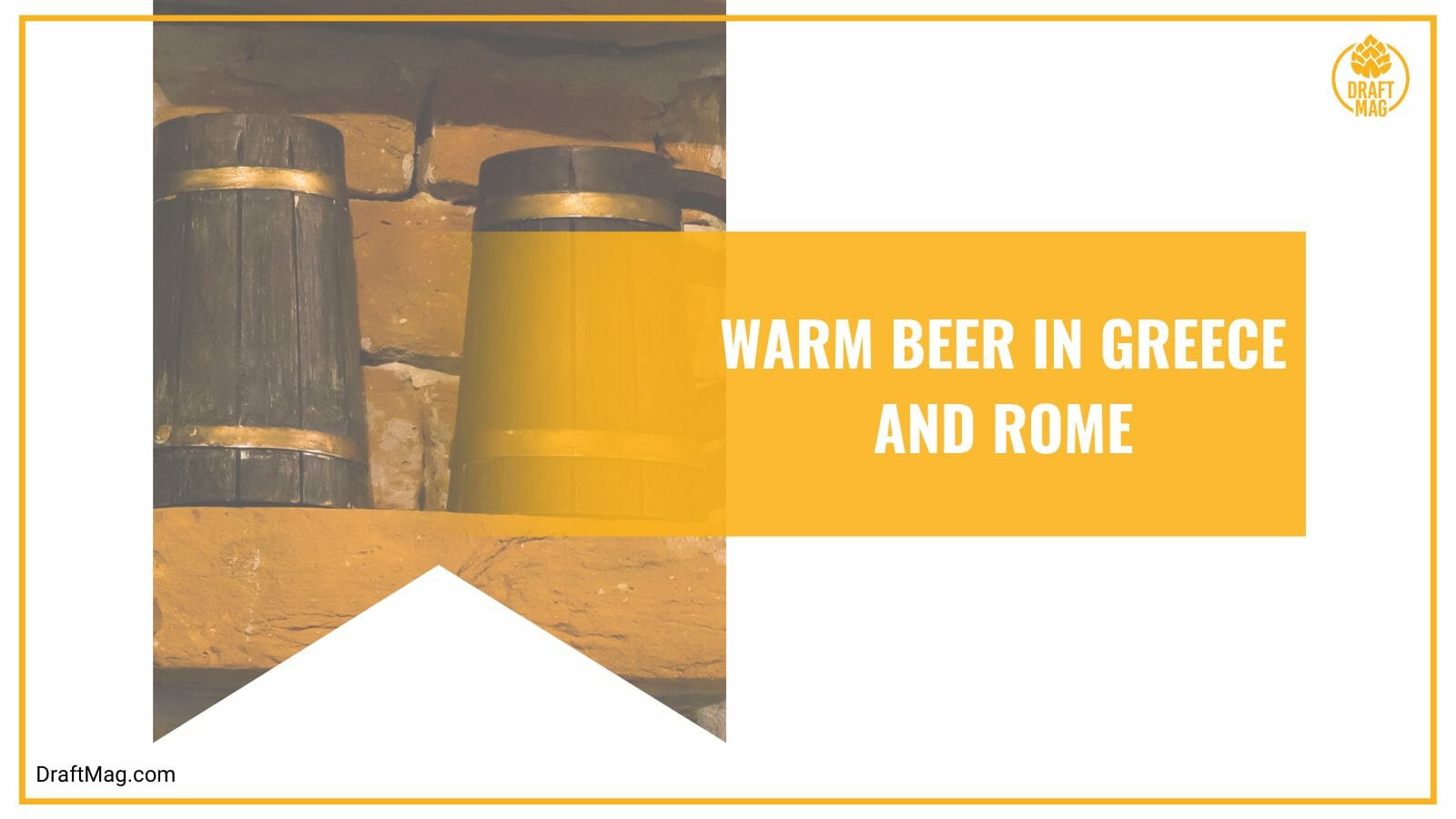 On the other hand, beer was thought of as a barbaric beverage and a drink for peasants. The Romans happened to copy the beer-making process from the Greeks and they came up with their own version named cerevisiae.

Archaeologists discovered this evidence in the tomb of a beer brewer called Cerveserius. The beverage was common among the folks who lived on the fringes of the Romans, especially the soldiers who later introduced it to Northern Europe.

Warm Beer In the Medieval Period

During the Medieval period, beers were brewed by monks at monasteries. These warm suds were high in nutritional value and were used by the monks during their periods of fasting. Monks guzzled about five liters of beer during the day and sold some to run the monasteries.

During the 9th Century, breweries began using hops in the brewing process. The idea was to refine the acidic taste and make it more drinkable – that was how modern beer started. At this time, beer was not produced in large quantities until somewhere in the 13th Century. The first countries to brew beer in commercial quantities were Germany, England and Austria.

England, a warm beer country, had taverns where hot ales were served in wooden cylindrical cups with lids known as tankards. The tankards preserved the temperature and kept the beer fresh. 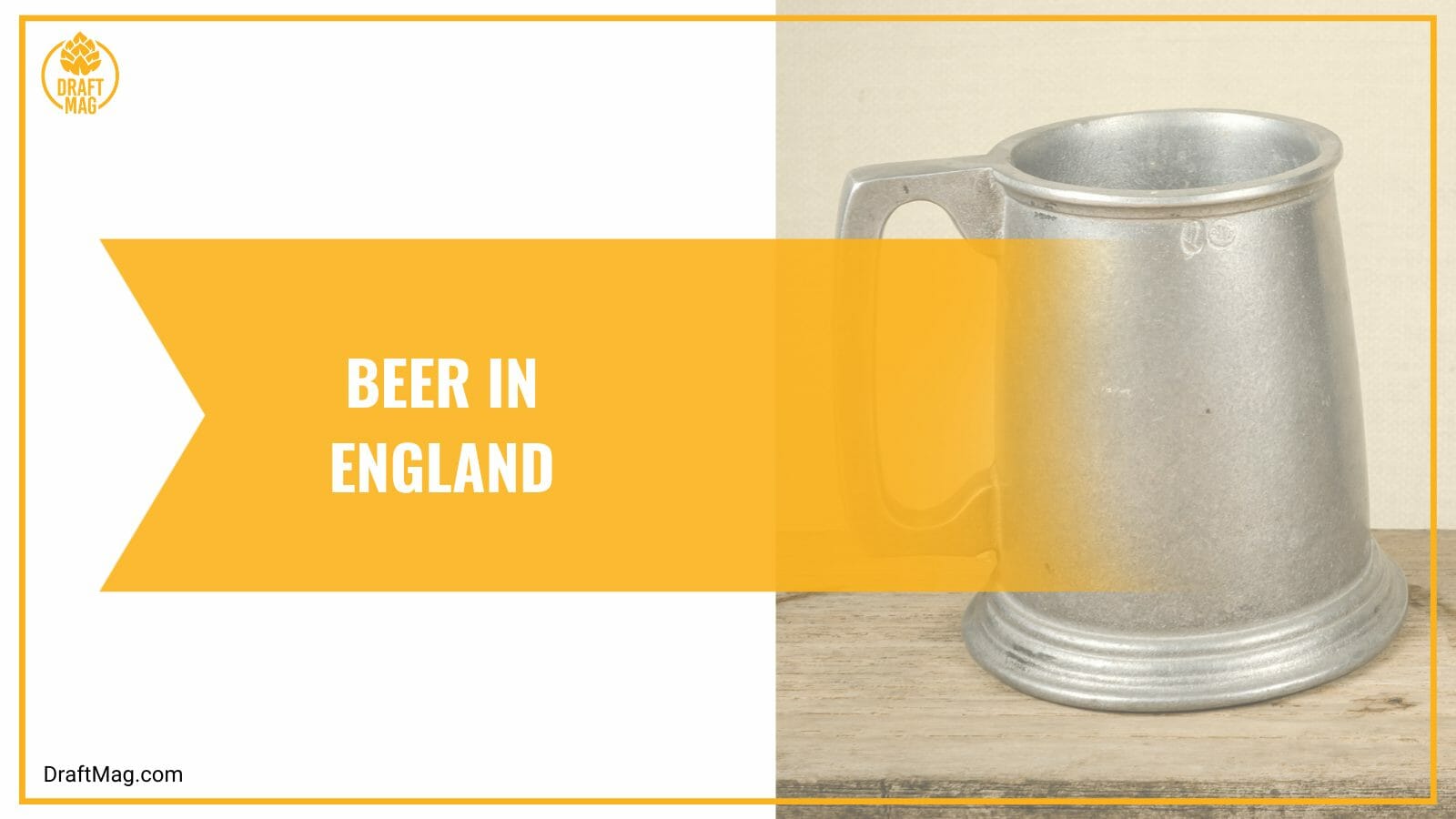 Drinking hot beer presented an opportunity to escape the mundane life of the 1600s. Even when the beer went cold, it was heated for a few reasons. Warm beer games were also played to spice up the experience.

The hot beer was called mulled, which meant heated, and patrons consumed them in large quantities. They believed that the mulled beer was nutritious and good for their bodies. According to Henry Overton in a 1641 article, warm beer was more wholesome than cold beer and cold beer tended to upset the stomach.

One of the most patronized beers at the time was Dr. Butler’s Ale, which was thought to aid digestion and clear other illnesses such as colds and coughs.

Dr. Butler’s Ale was also believed to boost the body’s immune system, help the body to relax, and improve memory and other brain functions. Even in the hot temperatures of the summer, patrons still preferred warm beer over cold beer due to their alleged health benefits.

Wintertime was no different even as demand for hot beer soared through the ceiling. Everyone wanted a hot ale to keep them warm and to boost the body’s defenses.

The Germans were the first to brew beer as evidenced by a discovery made at a village in Bavaria called Kasendorf. The evidence revealed jugs that still housed beer from the 9th Century. During the 1500s, the Germans began serving cold beer by cellaring the sud after it was brewed. However, hot or warm beer was the order of the day.

Soon, the German beer industry set the standard for the production of all ales by standardizing the ingredients and brewing process. They established the Beer Purity Law, known in German as Reinheitsgebot, in 1561, which stipulated the main ingredients should be water, hops and barley.

The Reinheitsgebot protected the consumer against unapproved beer or beer that didn’t use any of these ingredients. Three centuries later, Louis Pasteur discovered the need for yeast and it was added to the standard ingredients for beer.

Beer Arrives In the US

Warm beer made its way to the New Continent in the 1600s, brought by the settlers from Europe. The consumption of warm beer became rampant as people abandoned rum, which was more expensive at the time. Soon, the first brewery was established in New Amsterdam (today’s New York). Past presidents of the United States, George Washington and Thomas Jefferson, were well-known brewers. 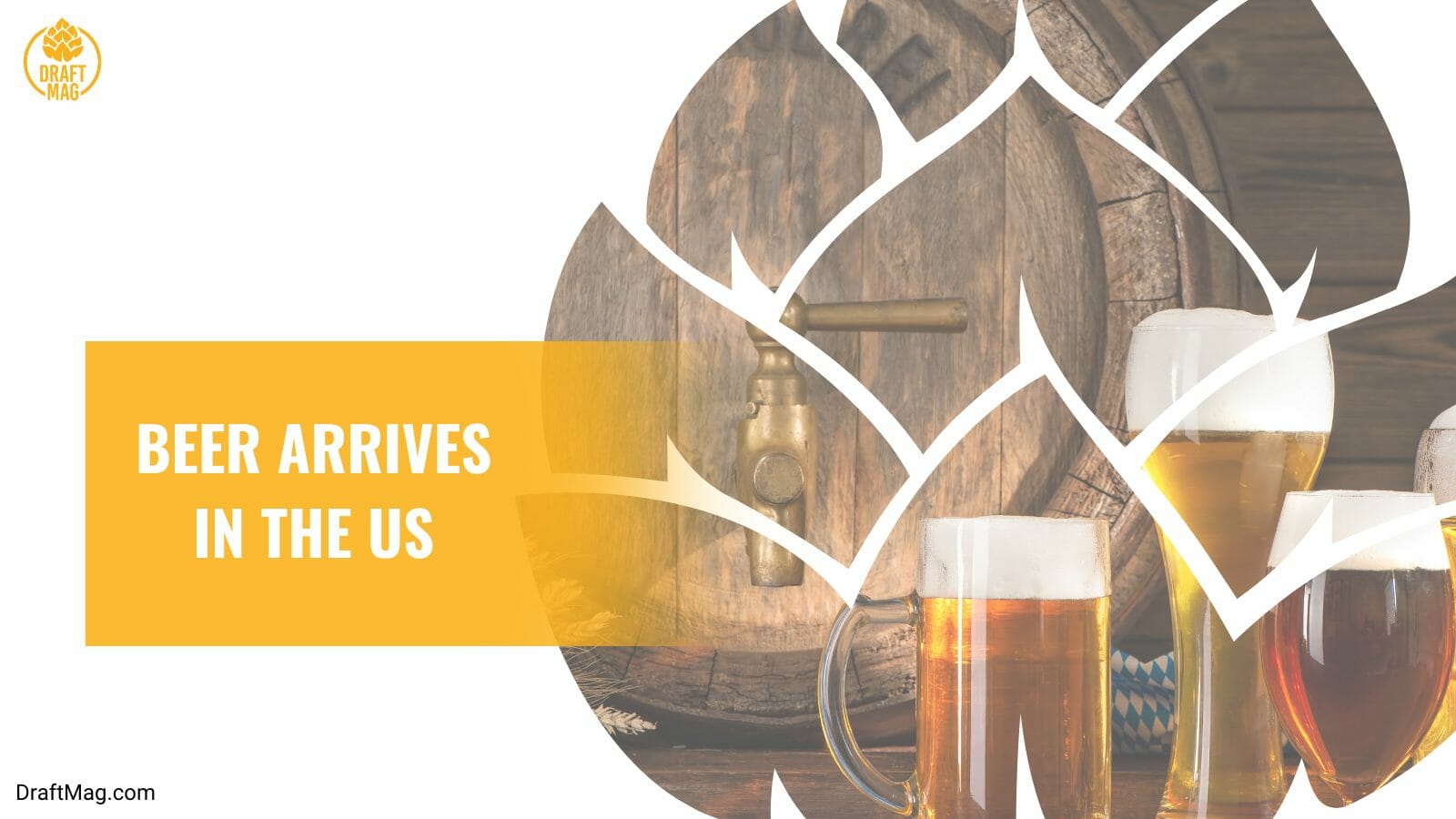 The beer industry began to boom with many of the breweries following the ingredients and the formula spelled out in the Reinheitsgebot. Remember that at this time warm beer was everyone’s favorite.

However, with the development of the refrigeration system in the 19th Century, things were about to change. Records indicate that Liebmann’s Sons Brewing Company in Brooklyn, New York, were the first to refrigerate their beers and serve them on a commercial scale.

Advent of Cold Beer and the Prohibition Law

Other breweries followed suit and by the end of the same century, over 3,000 breweries had sprung up and spread across the country. People still loved their warm beers but cold beer was gradually taking over the market. However, beer production and consumption hit a snag when the Prohibition Law was passed in 1851. This law began in Maine and was passed by the then Mayor of Maine, Neal Dow.

It didn’t take long for the other states to follow suit and in 1920 the whole country outlawed the beverage. By the time the law was repealed in 1933, over 3,000 breweries had been reduced to about 160. Today, we are fortunate to have a plethora of beers with different flavors to choose from. The only thing is that most of them are served cold and have to be warmed on purpose.

– Is It Good to Warm Cold Beer Before Drinking?

Yes, it is good to leave the cold beer alone until it becomes warm before downing it. This even allows you to taste the full flavors of the beer.

Today, many people like to drink their beer cold, but that was not always the case as we’ve discovered in this article. Here are the main points that this article has covered:

Beer came into North America from the European settlers and the first brewery was established in New Amsterdam. By the end of the 19th Century, cold beer began gaining momentum and by the 20th Century, it had completely taken over warm beer.