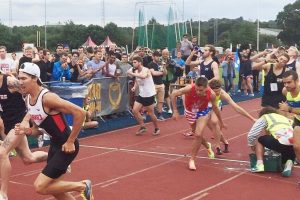 Beer mile is a rather interesting event that beer enthusiasts worldwide look forward to. If you’re planning to take part in an upcoming beer mile or simply want to know more about this event, this guide is for you.

Today we’ll talk about the beer mile, its rules, and how you should prepare for it.

What Is a Beer Mile?

The beer mile is a popular sports event where participants have to run while drinking beer. The rules require that each participant drink a can of beer, which is approximately 12 oz of beer in the USA and run ¼ mile. This has to be repeated three more times (making it a total of four laps) for the participant to win the race.

Note that the participants don’t have to run and drink at the same time. There’s a small transition area in between where you have to finish your beer before beginning the next lap. However, you can walk or move a little as you finish your beer.

Next, you have to finish a whole can of beer, run as fast as you can, beat the other contenders, and win the race.

How Did the Tradition of Beer Mile Began?

Today, the beer mile is a fairly popular athletic event. In fact, it also has its own national organization!

However, its origin dates back to August 1989 when seven guys from the Burlington Central High School came up with the idea to compete by running on the tracks of their school, all the while drinking beer.

Slowly, this idea gained popularity and by 1993, the first set of official rules were laid down. In 2014, the first world championship of beer mile was held in Austin, Texas.

The current world record holder for the fastest beer mile finish is a three-time champion named Corey Bellemore. With a record time of 4 minutes and 28 seconds, he again secured the title at the 2021 championship.

Official Rules of the Beer Mile

Does the beer mile look like a pretty easy drinking game? Well, it’s not! Given that this game is held at an international level, it’s pretty obvious that it isn’t as simple as it sounds.

If you’re planning on running your first beer mile, make sure you’re aware of these official rules:

How Is Your Body Affected During a Beer Mile? 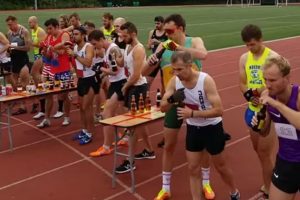 The beer mile is indeed a fun game, but considering the amount of beer you have to drink during the race, you certainly need to ascertain how it can affect your body and whether it’s in your body’s best interest to run the race.

So here’s a thorough insight into how a beer mile can affect the organs of your body. Decide for yourself whether it’s safe for you to take part in beer mile events.

First things first, your stomach can certainly hold four cans of beer for a race of four laps. Speaking in terms of cups, you’ll be drinking around one and a half cups of beer per bottle, making it six cups of beer in total.

As you run, a part of the beer travels into your bloodstream through the stomach lining, giving you the much-needed adrenaline rush and euphoria that boosts your speed.

The liver is perhaps one of the first organs that alcohol targets. Did you know that it takes about 60 minutes for your liver to break down 100 ml of beer?

On average, one beer bottle contains 354 ml of beer. This means that to digest one bottle of beer, your liver will take around 3.5 hours.

However, during the race, you will only have a few minutes to gulp down a bottle of beer. And to digest four beer bottles, it’ll take about 14 hours. That’s why a beer mile challenge is pretty hard on your liver.

The small intestine will absorb a substantial portion of the beer you drink. While your intestine generally doesn’t have much trouble digesting four bottles of beer, the only problem here is the lack of adequate time for processing it. This inability to digest the beer might cause you to vomit or experience cramps in your legs.

Needless to say, a large amount of beer–such as four bottles–has the potential to cloud your mind and impair your speech, movement, and coordination. It can also affect your performance during the race.

But when it comes to long-term consequences for regular beer milers, there isn’t enough evidence that questions the safety of beer miles.

Beer miles will most likely stress your legs. First of all, running four laps will trigger lactic acid production in your muscles that might cause slight discomfort. Add four beer bottles on top of that, and you will soon face trouble coordinating your muscle movements.

Things to Avoid Before a Beer Mile

Running and drinking beer is not everyone’s cup of tea. If you’re planning to participate in a beer mile event, make sure you prepare well and avoid the following things to increase your chances of winning the race safely.

– Don’t Drink Before the Event

When it comes to alcohol, people can get a little too optimistic at times. Drinking beer before the game will not help you warm up or prepare your body for the big event; it will only reduce your chances of running well on the tracks.

If you haven’t slept well the night before the event, you probably shouldn’t take part. Sleep deprivation will not only bring down your energy levels but will also slow down your body’s ability to break down alcohol.

This means you will lose out on the energy to run faster and will most likely feel dizzy after the very first beer. Both these factors will severely hinder your chances of even completing the race.

– Ditch the Race if You Were Recently Sick

Physical injuries aren’t the only deterrents to participating in a beer mile race. If you were sick recently — even with regular flu — your body isn’t ready to handle a beer mile. It will not be able to process four bottles of beer as fast as a beer miler should, nor will it provide you with the energy to complete four laps. 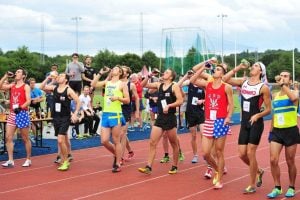 Although the concept of a beer mile is pretty fun, which it certainly is, it’s also equally athletic and physically demanding. If you wish to take part in a beer mile race, make sure you’re serious about it and have had adequate preparations for it.

You should also have someone to drive you back home post the event. Feel free to check out more about the race from the beer mile organization’s official website.