One of the questions you’ll ask yourself is “How many cases of beer in a keg?” if you are having any kind of get-together. Many people think craft beer tastes better in cans or bottles, but won’t it be awesome to pour beer straight from a tap? 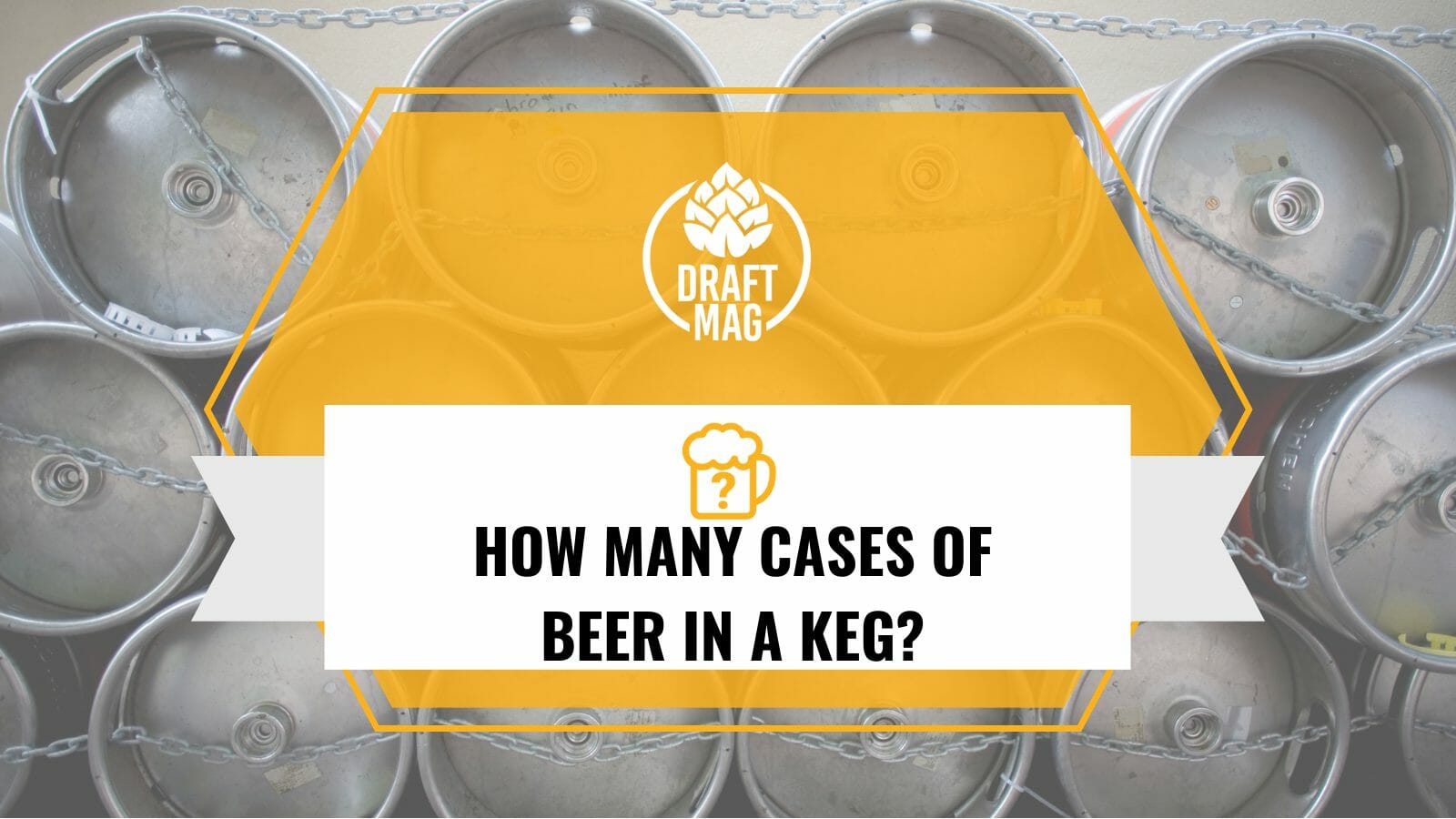 When planning a big event or having a bunch of people over, ordering a keg is way better than bottled beer. In this guide, we’ll answer various questions regarding beer keg sizes and how many cases of beer are actually in a keg.

How Many Cases of Beer in a Keg?

The most common type of beer keg is the half-barrel keg, which can contain seven cases of beer with a maximum capacity of 15.5 gallons. If you pour in pints, the half-size keg yields an equivalent of 124 servings. It also delivers an equity of 165 bottles or cans of beer.

If you just need a few beers, the half-size keg might be too much for you, so don’t order too much. There are various other options you can try when it comes to ordering kegs of craft beer. Below is a detailed overview of the standard sizes of kegs and the number of cases of beer you can find in them.

– How Many Cases of Beer Are in a Half Keg?

A half-size keg contains seven cases of beer. However, the name might be quite confusing, and this is what most people refer to as a keg. It has a height of 22.3 inches with a diameter of 16.2 inches. When the keg is filled with beer, it weighs 170lbs. 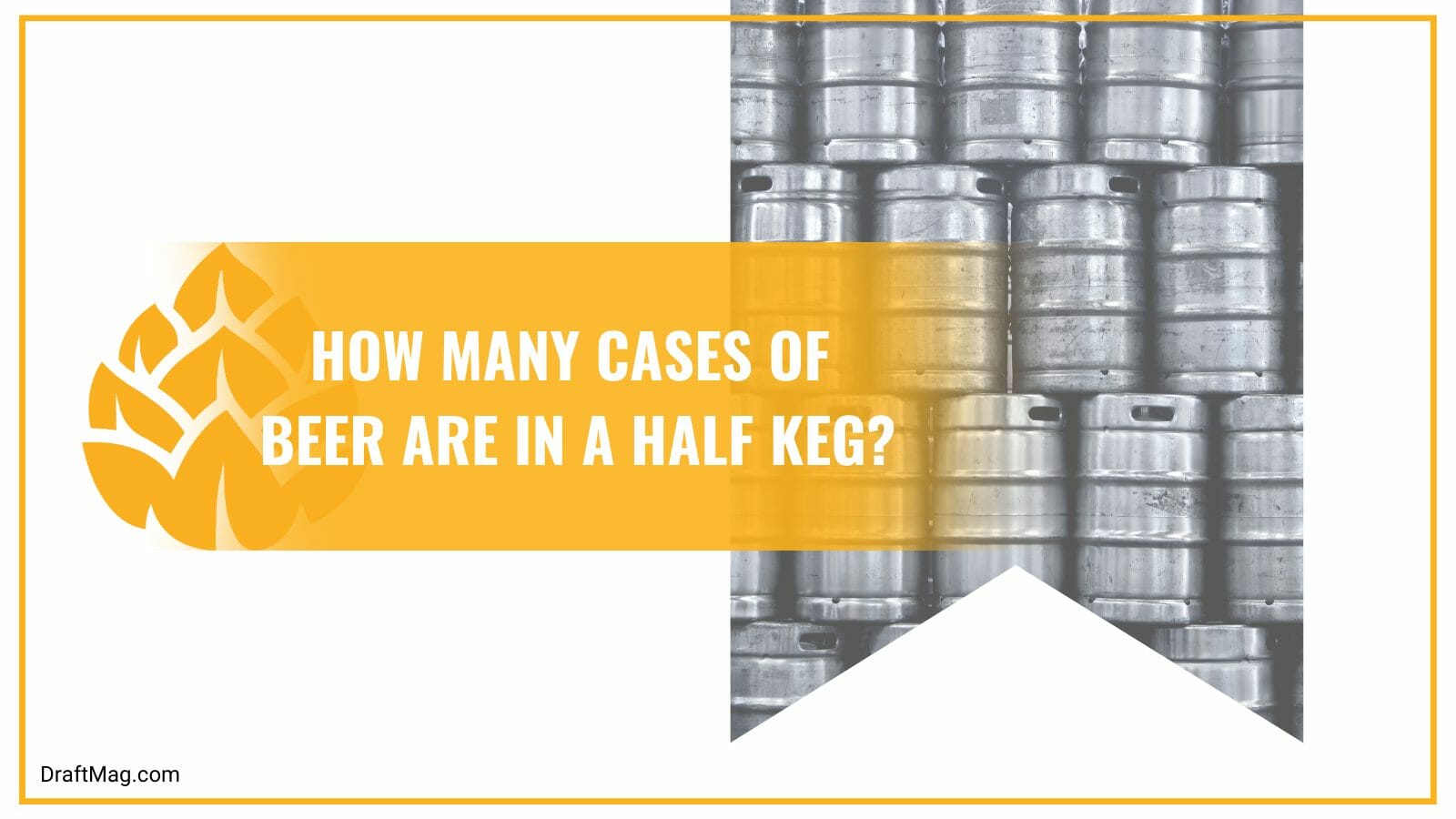 It is the most common kind of keg, and you’ll most likely see it in a pub or bar’s walk-in fridge. A half-size keg contains:

– How Many Cases of Beer Are in a Quarter Keg?

A 1/4 barrel keg can contain three cases of beer and it is the most common kind of beer keg. It comes in two different form factors. This type of beer keg is perfect for more intimate get-togethers where you don’t have a lot of guests coming.

A tall quarter keg has the same height as the half keg, but its diameter is smaller (11.25 inches). A quarter-size keg is also known as a pony keg and has the same diameter as a half-size keg (16.2 inches).

When full, a quarter barrel keg weighs 75 lb, and its capacity is half the size of a standard half-size keg. A quarter bard keg consists of:

– How Many Cases of Beer Are in a Sixth Barrel Keg? 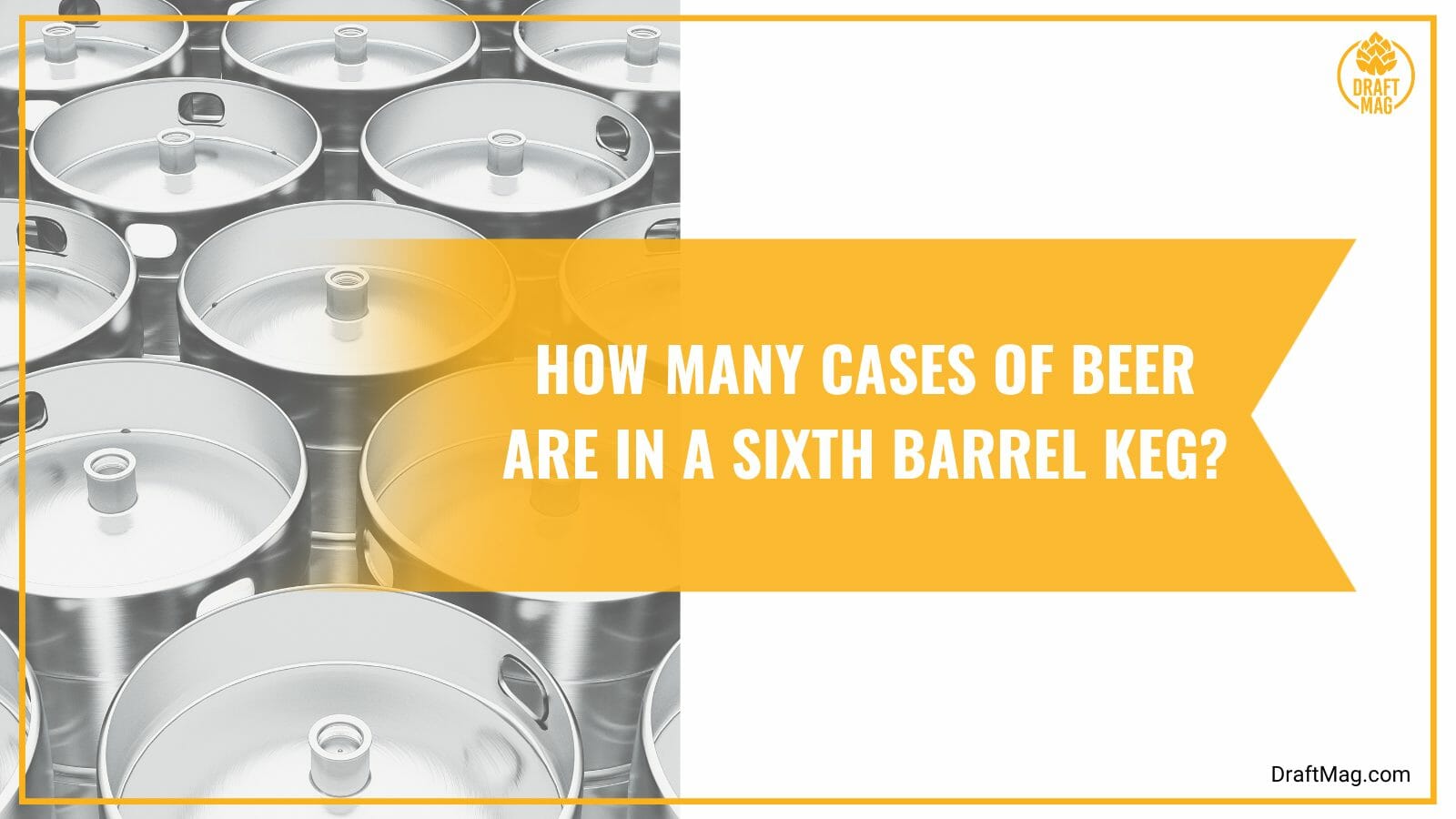 A sixth barrel keg is what you’ll find in beer enthusiast homes as dual tap kegerators. A sixtel keg contains:

– How Many Cases of Beer Are in a Cornelius Keg?

There are two cases of beer in a Cornelius keg. This keg is also known as soda or corny keg. They were designed to be used in the soft drink industry but are now common alternatives to bottled beers.

The soda keg is 23 inches tall with a nine-inch diameter and has a 55lbs weight when filled. A soda keg contains:

How Many Beer Kegs Will You Need?

The answer to this question will depend on how many guests are in your party; one half-barrel keg contains seven cases of beer, which is equal to around 15.5 gallons and is good for around 40 people.

This is an important question you need to ask yourself before proceeding to host an event. Can you ever have excess beers? Yes, you can, so knowing the right amount of beer is necessary.

However, knowing the amount of beer is quite simple and requires a simple formula that has worked for different people.

If you only want to serve beer for your event, assume that each invited person will drink one beer for an hour. Although some people will only have one beer, there are also those that will drink seven beers in a three-hour event. 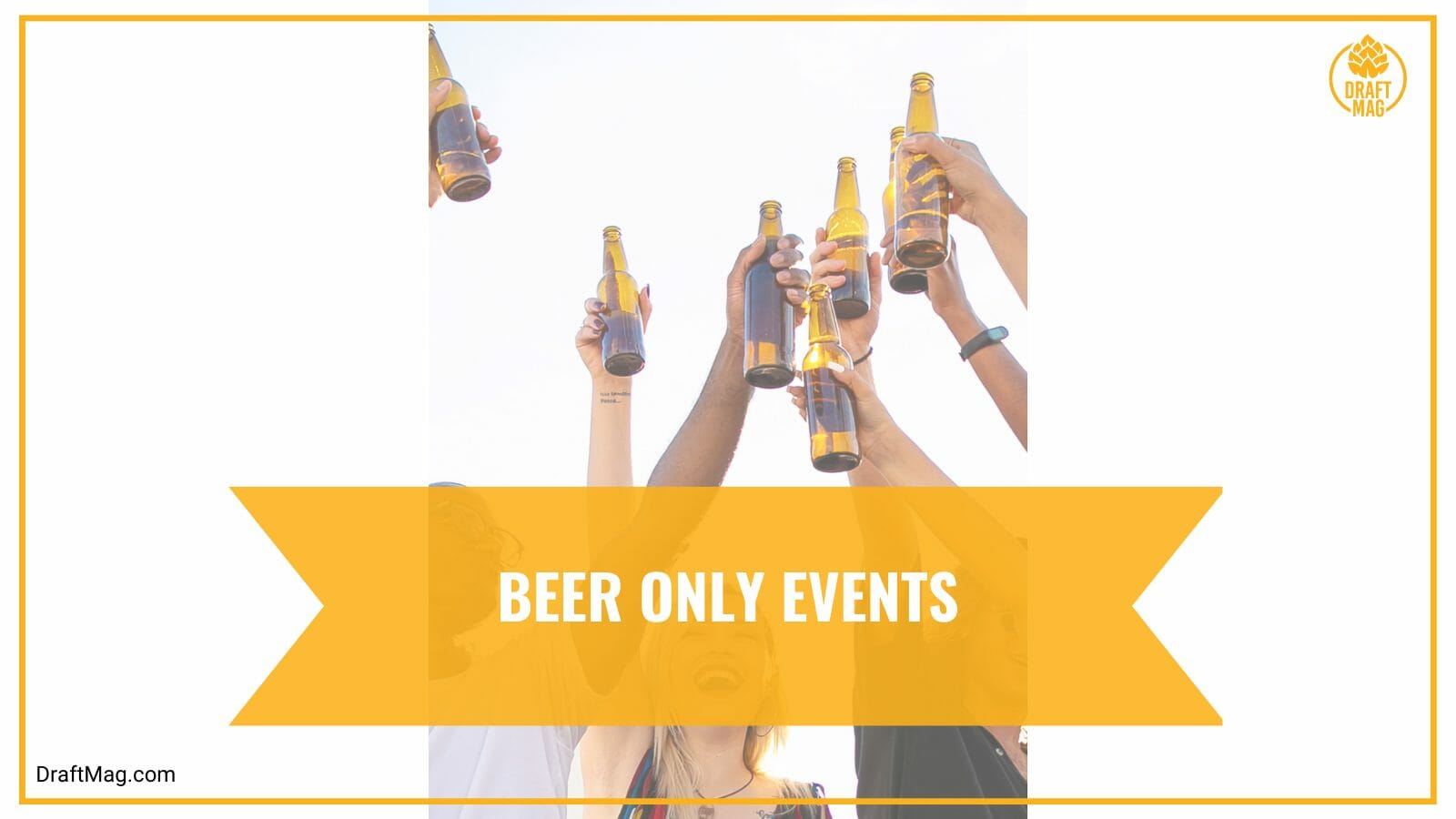 The one beer for one hour per person will help you have enough beer for everyone without having excess leftovers when the party is over.

If you wish to serve other drinks aside from beer, there is a high chance that people will drink them. We suggest that you buy enough beer for those kinds of events so that one person can have a can of beer for two hours. It is always good to know your crowd.  If you are having a large party, you might want to increase the number of beers.

However, if your guests are wine enthusiasts, you might need to get more wine than beer. This will prevent wasting money by buying tons of beer that will eventually go to waste.

– What Is the Price of a Kegerator?

Depending on its features, brand and tap, a kegerator for a  standard barrel keg costs about 500 to 2,000 dollars. Kegerators are specialized refrigerators designed to preserve and cool beer. The moment you start tapping the keg, the lifespan of the kegerator begins to reduce.

However, you can store beer in a kegerator for more than six months. You get to save money when you switch from cans or jiggles to exclusively tapped beer. Nowadays, there are different models and styles of kegerators in the market. Some come with a built-in ice maker and two or more taps. Others appear small and fit perfectly with a home bar. 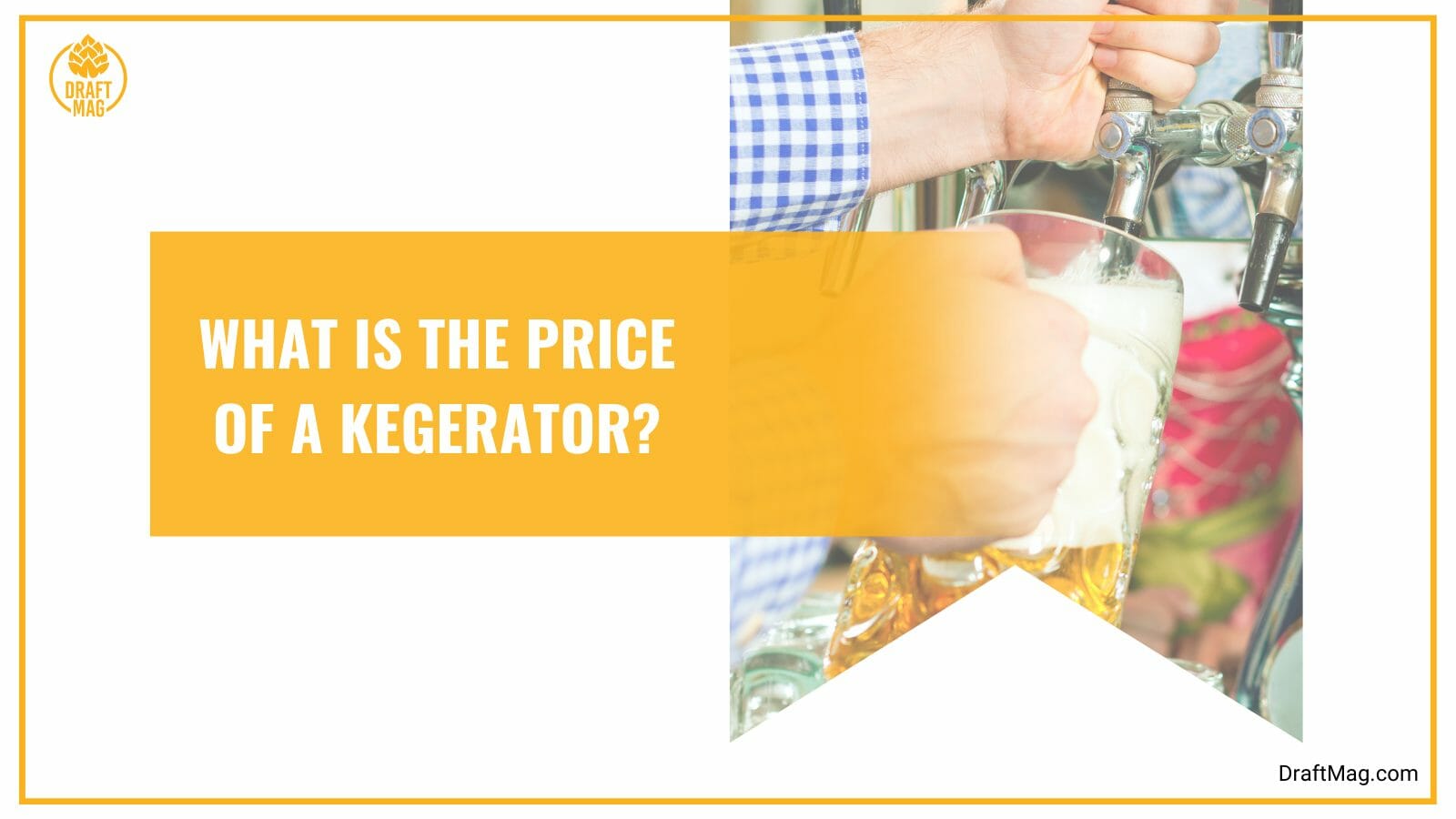 Most kegerators are factory set to 38 degrees Fahrenheit, but you can still adjust their temperature. This way, you can be sure the beer is cooling without leaving excess foam. You can get a used kegerator for about the price of a new one. You can get a mini keg for about 50 to 400 dollars.

– What Is the Cost of Renting a Beer Keg?

Usual beer keg renting charges can range from 15 to 30 dollars, with a deposit of around 20 to 50 dollars, to be returned upon the safe and non-damaged return of the kegs.

Most times, you rent a keg after buying a beer, and you return it after usage, so aside from the price of beer, you also need to add the rental cost of the keg. It is the same whether you order from a local wine or liquor store. If you decide to order online, the keg will be delivered to your desired location. However, you might have to add the shipping fee in such cases.

If you don’t like deliveries, you can buy the beer from any liquor store, but you will need help picking up the keg since it’s quite heavy. In this case, you will only pay taxes, deposit and the tap cost. The deposits usually range from 20 to 50 dollars.

However, it depends on the brand you choose, the return date and the keg size. The tap renting fee ranges from about 15 to 30 dollars. If you can return the empty, clean and sanitized keg, you’ll get your deposit back. Otherwise, you’ll be required to pay an additional cleaning fee which might be up to 50 dollars.

– Cases of Beer or Keg

A standard keg contains 1,984 ounces or 15.5 gallons of beer. A case of any standard beer has about 24 12-ounce cans, and it costs about 23 dollars. So to get that same amount by ounces as a standard-size keg, you would need to get seven cases of the beer, which is about 160 dollars. 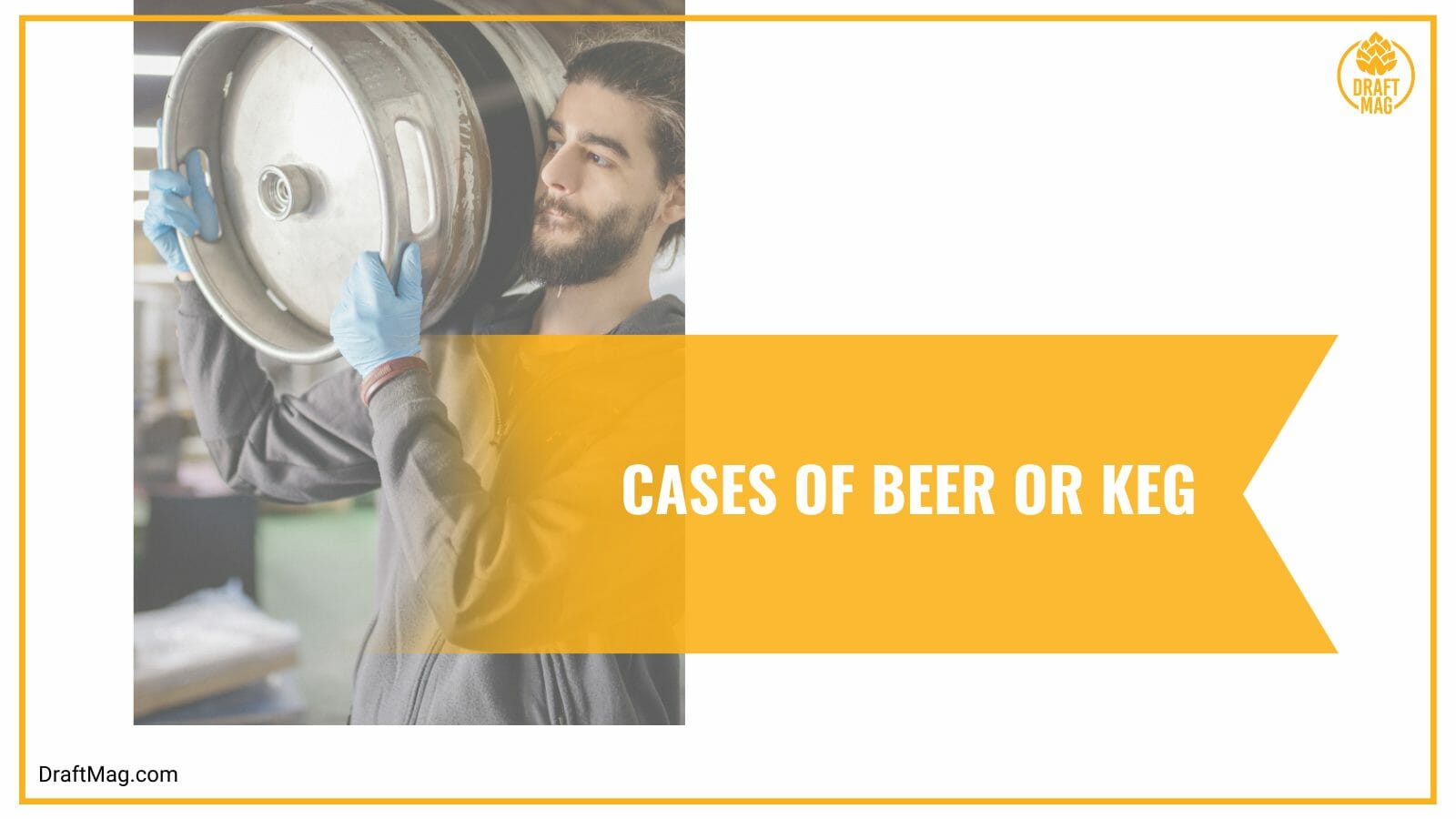 With these, you get to save over 55 dollars per keg.

What Are the Advantages of a Beer Keg?

Drinking beer from a keg will save you a lot of time and energy and is also a greener way to drink beer. Beer kegs save time, and is far better than consuming beer in a can or bottle. For instance, a half-barrel keg can store up to 165 cans of beer and lasts for about eight weeks before it loses its taste.

Kegs can be reused and then refilled, reducing waste and saving your money and time on subsequent beer runs. Kegs are also extremely long-lasting and durable. A single beer keg can dispense over 20,000 pints in its lifetime and is equivalent to over 27,000 bottles and cans as waste.

The environmental impact of draft beer is about 68 percent lower than bottles or canned beer. This is majorly due to the difference in packaging. Over 45 percent of the CO2 emissions from a bottle of microbrew beer can be attributed to waste from distribution, retail, storage, and disposal. 165 beer cans contain five pounds of aluminum, yet a typical, reusable keg requires no packaging and generates no solid waste.

– Ordering a Beer Keg for Your Next Event

So do you think ordering a keg of beer for your next event is the right decision? Yes, it is a great decision. No matter how small the event will be, serving draft beer at your event adds a certain elegance to the event. 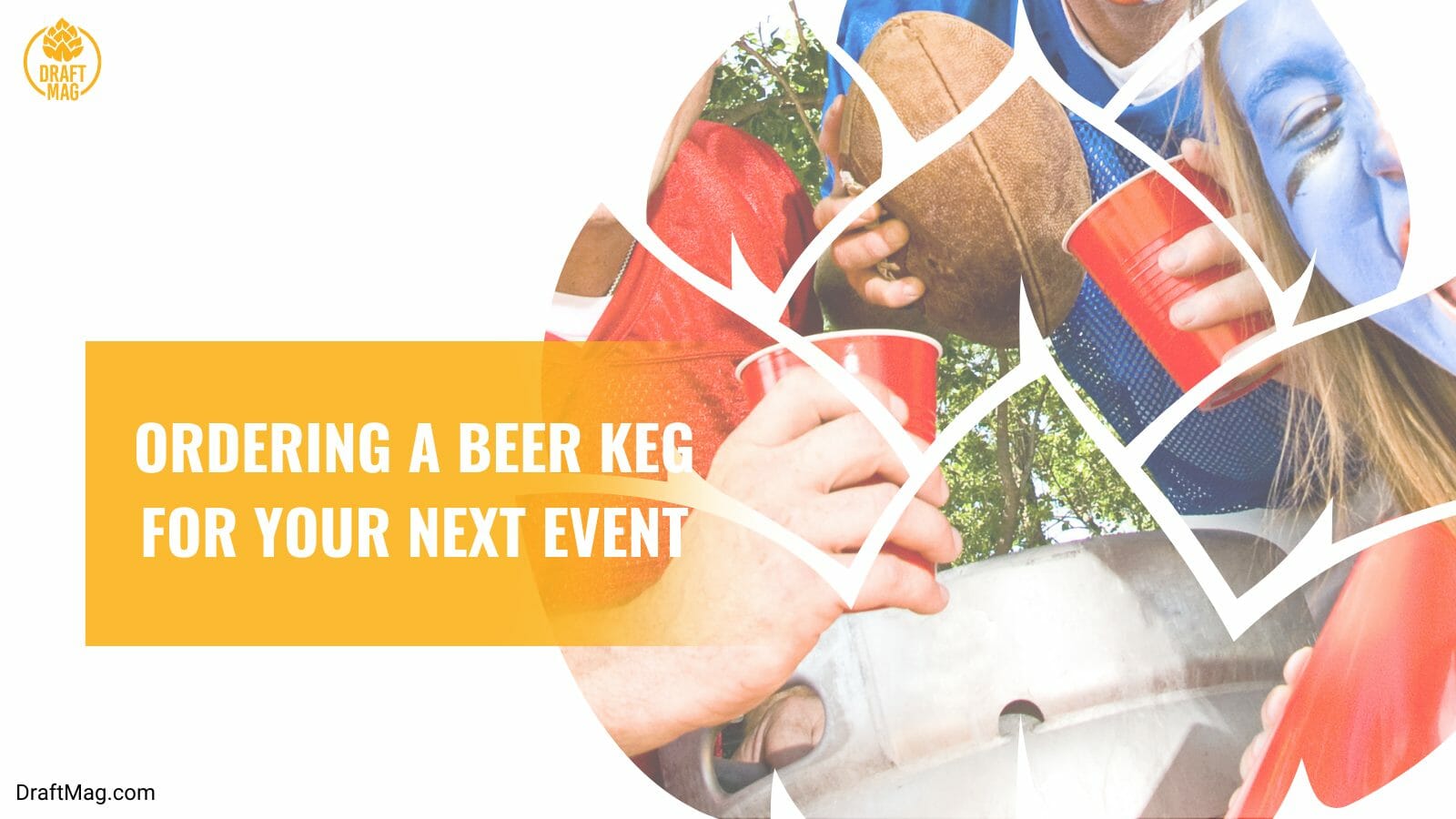 The only problem is that you have to rent or buy a kegerator and surplus glassware for all your guests, but if you hire a caterer, all these will be taken care of.

– How Long Does a Keg Stay Fresh?

Most tap beers are dispensed with carbon dioxide, so the rule of thumb states that a non-pasteurized beer will retain its quality for about 45 to 50 days, provided that proper temperature and pressure are maintained.

However, if you are serving a pasteurized draft beer, it can last up to about 90-120 days. If you just got an air-pumped party keg, it is better to consume it within eight to twelve hours to enjoy its freshness.

You will discover that most breweries usually print a fresh date on the keg for your ease. Make sure you carefully read the instructions on the label as some brewers print it as “born on “ date or “expiration date.” The dates take into account the days it is in the brewery’s inventory and are usually printed on the side of the keg or in the cap.

You are now informed about the number of cases of beer you can find in a keg and other vital information regarding kegs. Here is a quick recap of some of the most important points.

Now that you know all the important information about kegs of beer, you won’t make the wrong decision on your next event. Go through the guide carefully to know the number of kegs you need for your event.