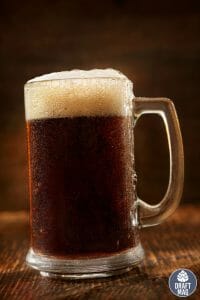 If you’re wondering, “Does root beer have alcohol?” you’re probably thinking about the beer part in the name or wondering if your kid should be drinking it.

Root beer isn’t fermented, so it doesn’t have alcohol, although there is more to this. It is also not a beer, regardless of the name.

Continue reading this guide to learn more about root beer facts and history, especially details on whether it has alcohol or not.

Does Root Beer Have Alcohol?

Root beer does not have any alcohol in it, because it does not have the adequate ingredients to convert sugar to alcohol when it ferments, unlike the typical process with beer. It is naturally carbonated, making the carbon dioxide toxic to the yeast and preventing it from becoming alcohol.

The beverage was initially made with the root bark of the sassafras tree, although because it contains carcinogens, companies use artificial flavorings today. The sugar and yeast in root beer does not create enough ethanol to be considered alcoholic. After fermenting, the amount of alcohol in the beverage is the same as the amount in a piece of bread, and we all know that bread doesn’t get you drunk.

The amount of alcohol in a root beer is not harmful, and it won’t get you drunk (check the best one on our list). Some types of orange juice even have more alcohol than root beer.

– Did Root Beer Ever Have Alcohol in It?

Initially, root brews had alcohol in them, but it was only a minimal amount. They were categorized as small beers because the ABV level was between 0.5 and 2 percent. Breweries made this kind of beer because it was safer to drink and famous for day drinking.

Also, the fermentation process of root beer was used to clean their polluted water. Nowadays, we have hard versions, so not all root brews are considered small beers.

– Does Homemade Root Beer Have Alcohol?

No, homemade root beer does not have alcohol, except if you intentionally brew it to be alcoholic. It will only have the tiniest amount of alcohol, and you can increase the amount of alcohol with different methods.

To make your homebrew root beer alcoholic, you can add aromas and flavoring to a base beer and brew it. It will taste similar to root beer but more authentic. You can also decide to add sugar like corn sugar to the root beverage, so that the yeast will convert it to ethanol. This leads to higher alcohol content.

It’s a good idea to buy root beer kits if you decide to make them at home.

– Does Hard Root Beer Have Alcohol?

Yes, hard root beer has alcohol, and it’s pretty apparent in the name. Any beverage with “hard” has alcohol in it. It is different from standard root beer, with 4 percent or more ABV.

Sprecher Brewing Co. first made the alcoholic root beer. But now, many other root beer brands are making it. You can also find modern alcoholic versions.

– Why Is There No Alcohol in Root Beer?

There is no alcohol in root beer because the ingredients make it non-alcoholic. Since it is made with spices and sugar, and there is not enough sugar to convert to yeast, it has little to no alcohol. It cannot ferment, although it can be made into a hard drink. The soda can be carbonated or non-carbonated.

All About Root Beer

Here is everything you need to know about this popular drink.

– Is Root Beer a Beer or Soda?

Root beer is classified as a soda or soft drink and not a beer. The beverage is made with the following ingredients:

Beers are brewed with barley malts, hops, water, and yeast, and after fermentation, they can be alcoholic. The brewing process between root beer and beer is also different.

Although every root beer brand tastes different, they all have a similar spicy and sweet taste. It became very popular during the prohibition because people needed something similar to beer, and this was the closest choice.

Legally, kids can drink root beer. Since it is classified as a soda and has safe levels of alcohol, you can give this beverage to your children without worrying about getting them drunk. What you should be concerned about are caffeine and sugar.

For one, some brands contain caffeine which is not ideal for children aged 12 and below, so you should check the label before you give it to them. Also, the average can of root beer contains about 39 grams of sugar, which is more than the safe limit of 25 grams for children. If you give your kids root beer, you should give them small amounts at a time.

However, kids can drink ginger beer. It is not beer regardless of the name, and just like root beer, it features a spicy and sweet flavor. It has no alcohol in it, making it safe for kids.

Root beer is safe to drink because it is made with artificial flavoring. Modern research shows that the sassafras tree bark, which was historically used to make traditional root beer, is bad for your health. This is ironic since many people have used this tree bark as a health tonic for a long time.

The organic compound from the sassafras plant is called safrole, which can lead to cancer, so the FDA banned it, leading to companies using artificial sassafras flavoring.

Even if it’s safe to drink, it’s not always great for you, so you should check what you consume before buying a can. The caffeine and sugar levels might not be ideal for some adults, and it isn’t a good drink before sleep.

– What Are the Origins of The Term ‘Root Beer’?

The name “root beer” is derived from the practice of indigenous Americans that brewed different leaves and roots for making drinks. Also, European settlers used this process to make small beer or ginger beer. Since many people liked the sassafras root, a pharmacist made a beverage called root tea. Since the name didn’t appeal to others, he changed it.

– Why Do Some Root Beers Have Caffeine and Some Don’t?

This depends on the decision of the brand and product, as some brands want their root beer to have caffeine and some don’t. Most brands don’t have caffeine, unlike the Barq’s root beer, which is added to the soda artificially. It will also be reflected in the taste of the root beer.

With a long history and a confusing name, there’s no doubt that beer lovers have many questions about root brews. Root beer is a fantastic soda for all ages, especially since it does not contain any harmful levels of alcohol.

Now that you know the amount of alcohol in root beer, you can feel free to purchase this soda and drink it before driving or giving it to your kids. Anyone can drink it without worrying about side effects, although you can also make the hard version if you want an alcoholic kick.