If you’ve thought about how to drink beer without tasting it, the hard truth is that beer is bitter and there’s hardly anyone who likes its taste on the first try. However, it is the most consumed alcoholic drink with many connoisseurs praising its taste and refreshing qualities. 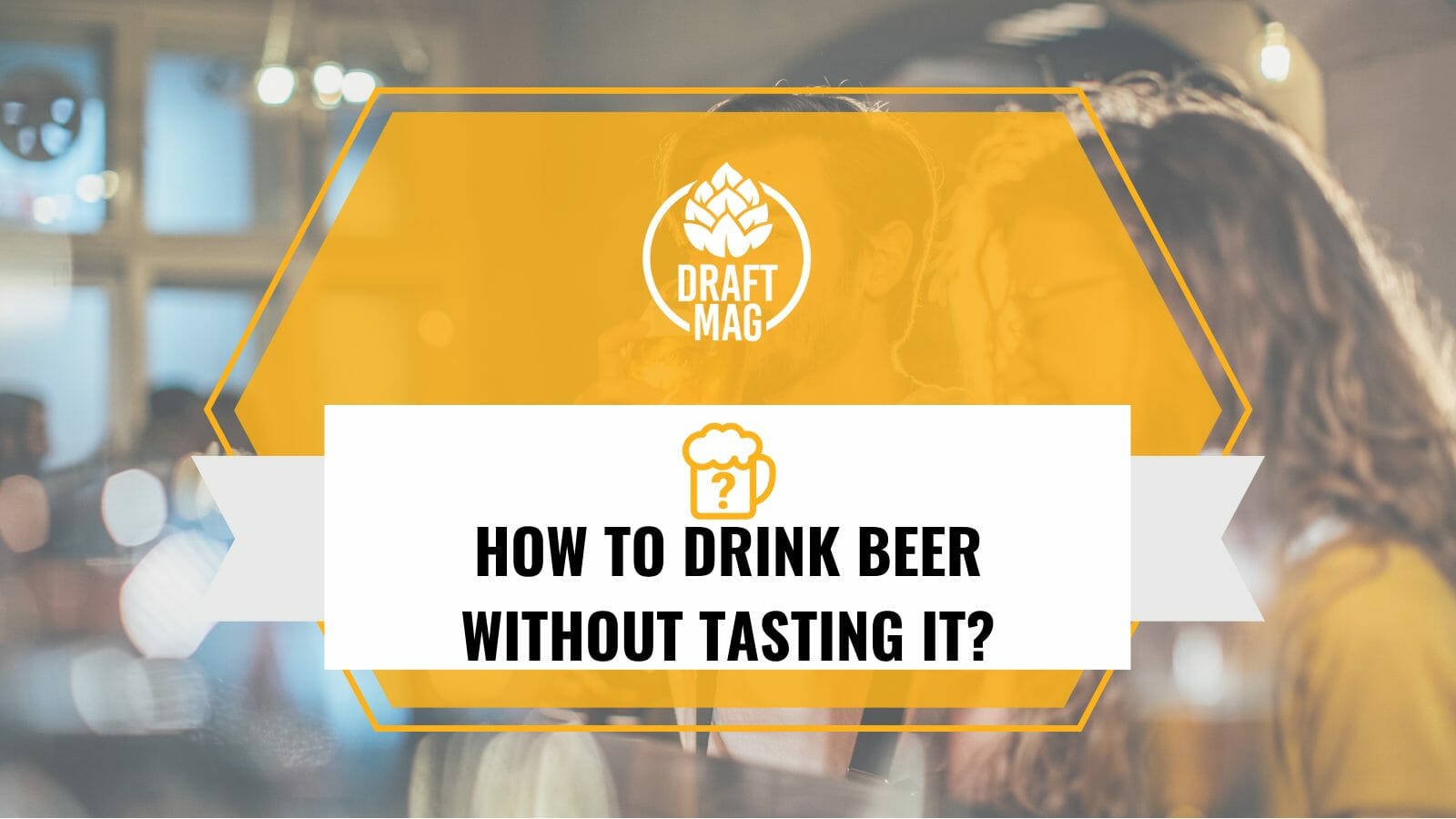 Though your first attempt at drinking beer didn’t go as planned, you may want to give it another try but you’re wondering about the best way to go about it. Well, we’ve compiled nine of the best and most practical ways to enjoy beer without experiencing the bitter taste, so read on!

How To Consume Beer Without Tasting It?

There are several ways to down an ale without tasting it including breathing through the nose, holding the nose, using a straw, and drinking the beer ice-cold. All these methods have their unique ways of working as we’ll explain in the following paragraphs.

– Mix It With a Margarita

One of the most effective ways to dodge the bitter taste of beer is to pour some margarita into the mix. Margarita has citrusy flavors that can balance the tartness of beer and make it more drinkable for a first-timer. 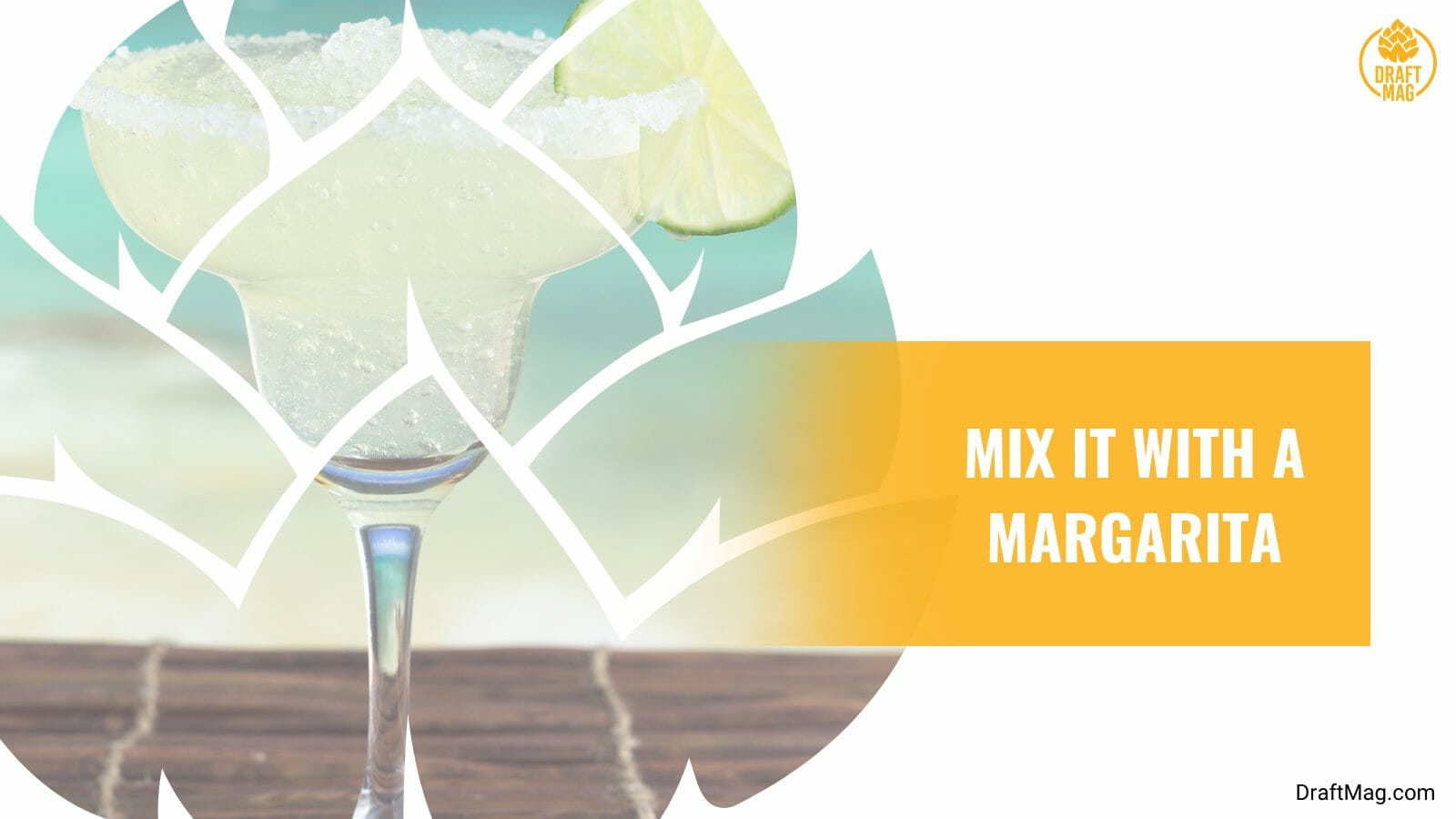 However, tequila lovers can opt for beer if they ran out of the former — after all, beers make a great substitute. However, be cautious as adding the tequila could spike the alcohol content of the beer and before you know it, you’re drunker than you’d typically want to be.

Another way is to hold your nose while you chug down that ale. Though this sounds counterintuitive, it does a good job of reducing the flavors that the tongue tastes. Once the beer is consumed, the olfactory nerves in the nose communicate with the brain, which then forms a perfect flavor of what is being drunk.

Thus, pinching the nose helps to reduce or temporarily block the pathway between the olfactory nerves and the brain.

This prevents the brain from forming the “proper” flavors of whatever you’re drinking, thus, you can skip the bitterness. An alternative is to drink cold beer when you have a cold or stuffy nose as it goes through the same process. However, the downside is that you could miss out on the wonderful flavors that some beers have to offer.

– Eat a Spicy Meal Before Drinking

Eating a spicy meal before chugging a beer is great if you want to avoid the taste of beer. This is because the meal can numb the taste buds, allowing the beer to pass through without feeling the flavors. 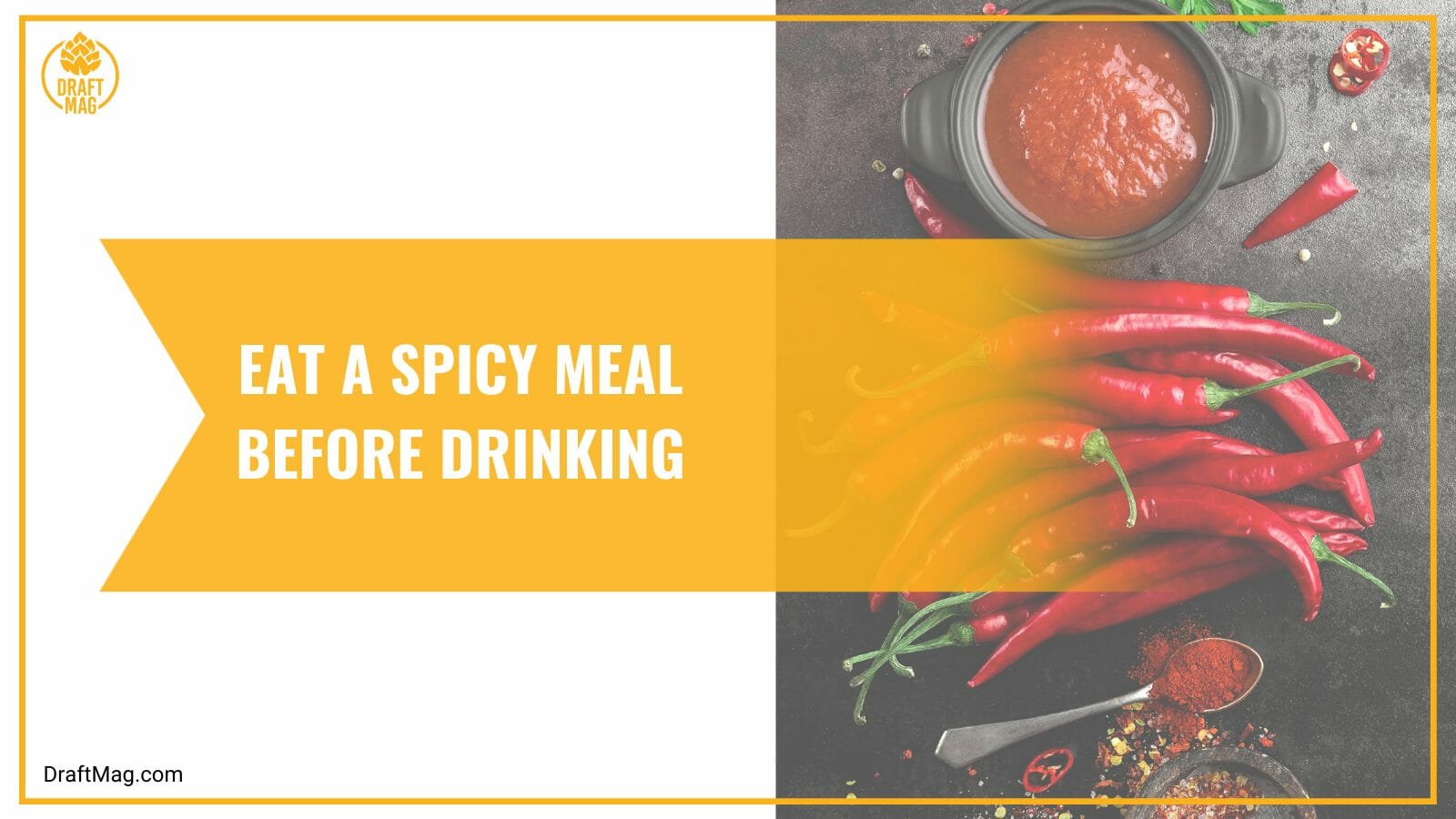 Others also prefer to use raw chilies, black peppers and habaneros, however, a runny nose could ruin the fun. The best is to spice up some foods like chicken wings, pork and tofu, which are perfect for acidic suds.

According to science, warm water tastes better than ice water because cold water numbs the taste buds, thus reducing their ability to sense any impurities. The same can be said of an ice-cold beer.

Drinking the beer warm would excite the taste buds and they won’t miss any hint of flavor in the ale. Therefore, be sure to keep your beer on ice and allow it to chill almost to the point of freezing before chugging it.

You may not eliminate all the flavors but they’ll reduce it drastically. This strategy is perfect for teetotallers or drinkers who are trying new styles of beer that their palates are not used to.

Beer matches perfectly with food, which is why many breweries and taprooms across the country sell food alongside the suds. The bitterness of beer can be an awesome appetizer and a perfect balance of spicy and delicious food. 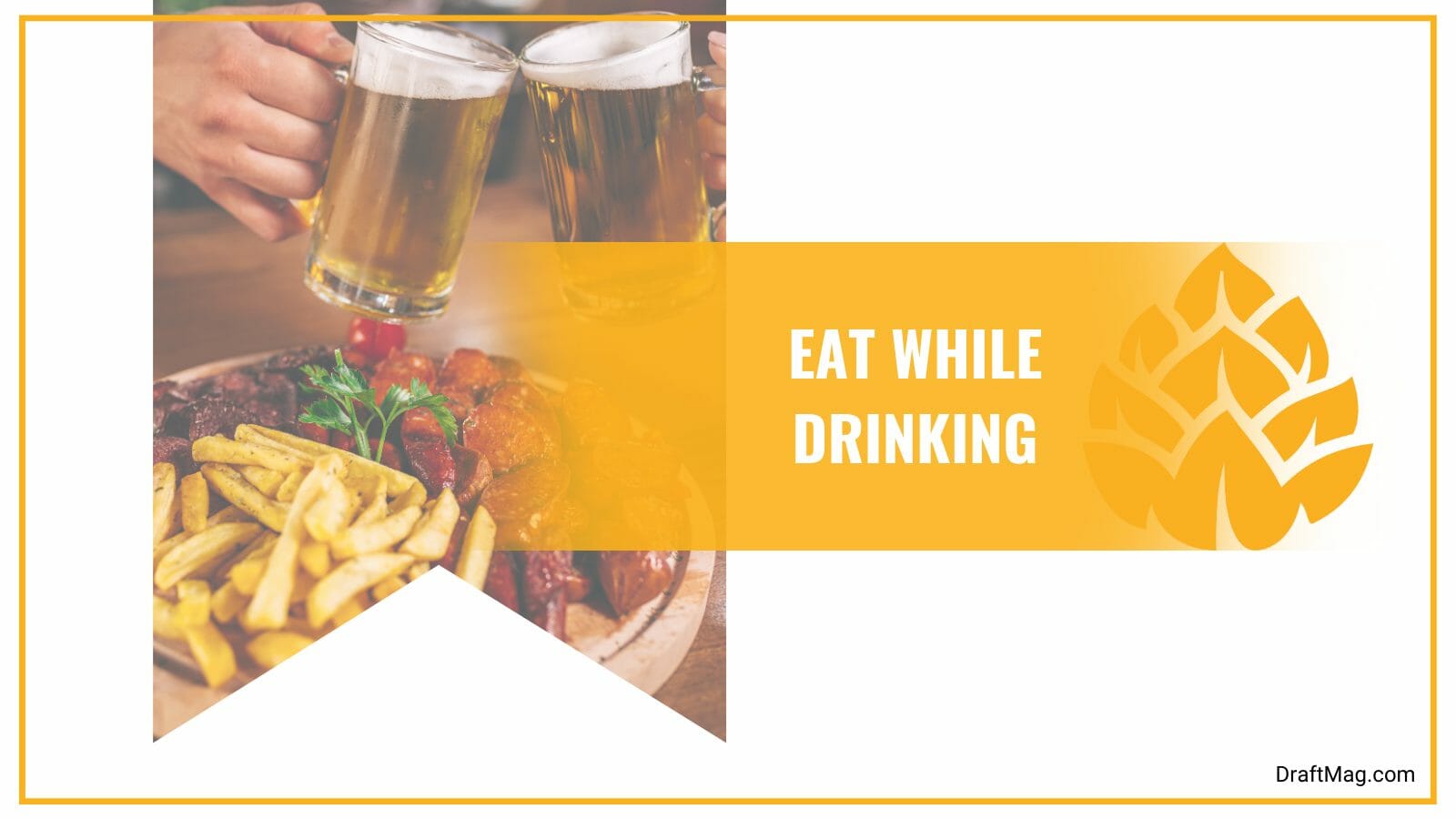 Eating some food can also trick the taste buds and the mind to concentrate on delicious food instead of beer. This method is ideal for tasting sour suds because sweet beers are best taken alone.

This method is similar to that of pinching your nose, just that this one requires you to hold your breath while breathing through your mouth. As you may have guessed, the science behind this method is the same as holding your nose.

By holding your breath, the olfactory nerves don’t function optimally, thus you get to taste the reduced flavors of the beer. However, this may require some practice to perfect but it is worth the try.

– Breathe Out Through Your Mouth

Giving out a sharp breath through the mouth prevents you from tasting the drink. This is because the aroma of the beer affects its taste – if you don’t smell it, you don’t taste it. 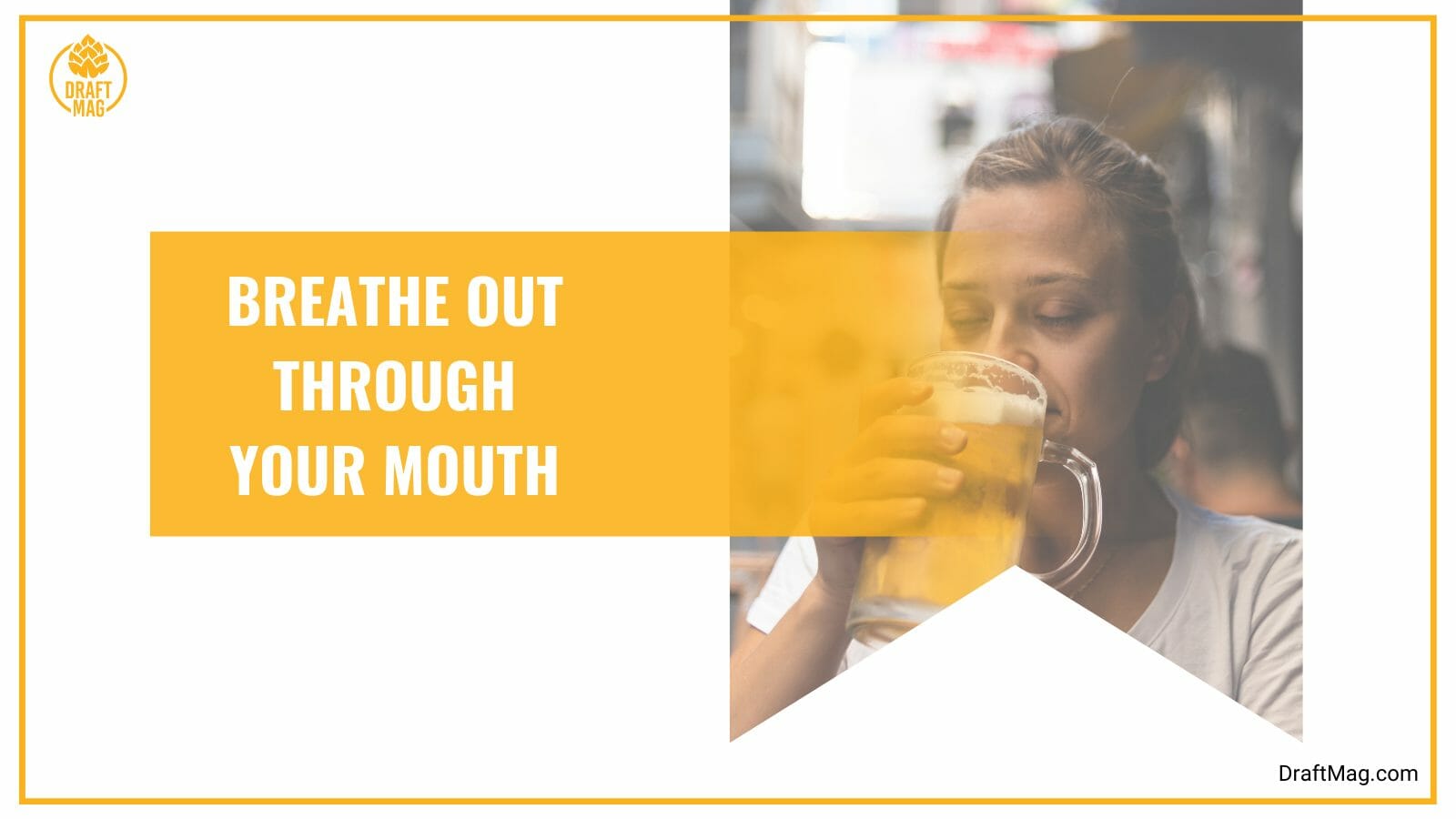 Exhaling prevents the aroma of the beer from running up your nose and exhaling through your mouth will reduce the beer’s taste.

– Drink the Beer With a Straw

Drinking the beer through a straw may skip your tongue and palate and end up at the back of your throat. This will require some skill as most people who use straws still have the drink landing on their tongue.

However, the idea is to aim for the back of the tongue, though caution must be exercised to avoid choking on the drink. Also, you stand the risk of inducing a reflex action at the back of your throat that could cause you to throw up.

Some people suggest the usage of a tube that runs straight from the beer to the throat. That could also do but beware of the dangers pointed out above.

– Take Beer With a Sweet Drink

This method is relatively straightforward. The idea is to balance the taste of the beer with a sweet drink like coca cola or take some ice cream alongside it. You can use it in conjunction with the 8th method. The sweet drink should cancel out any bitterness you might feel if the beer hits your tongue or palate. 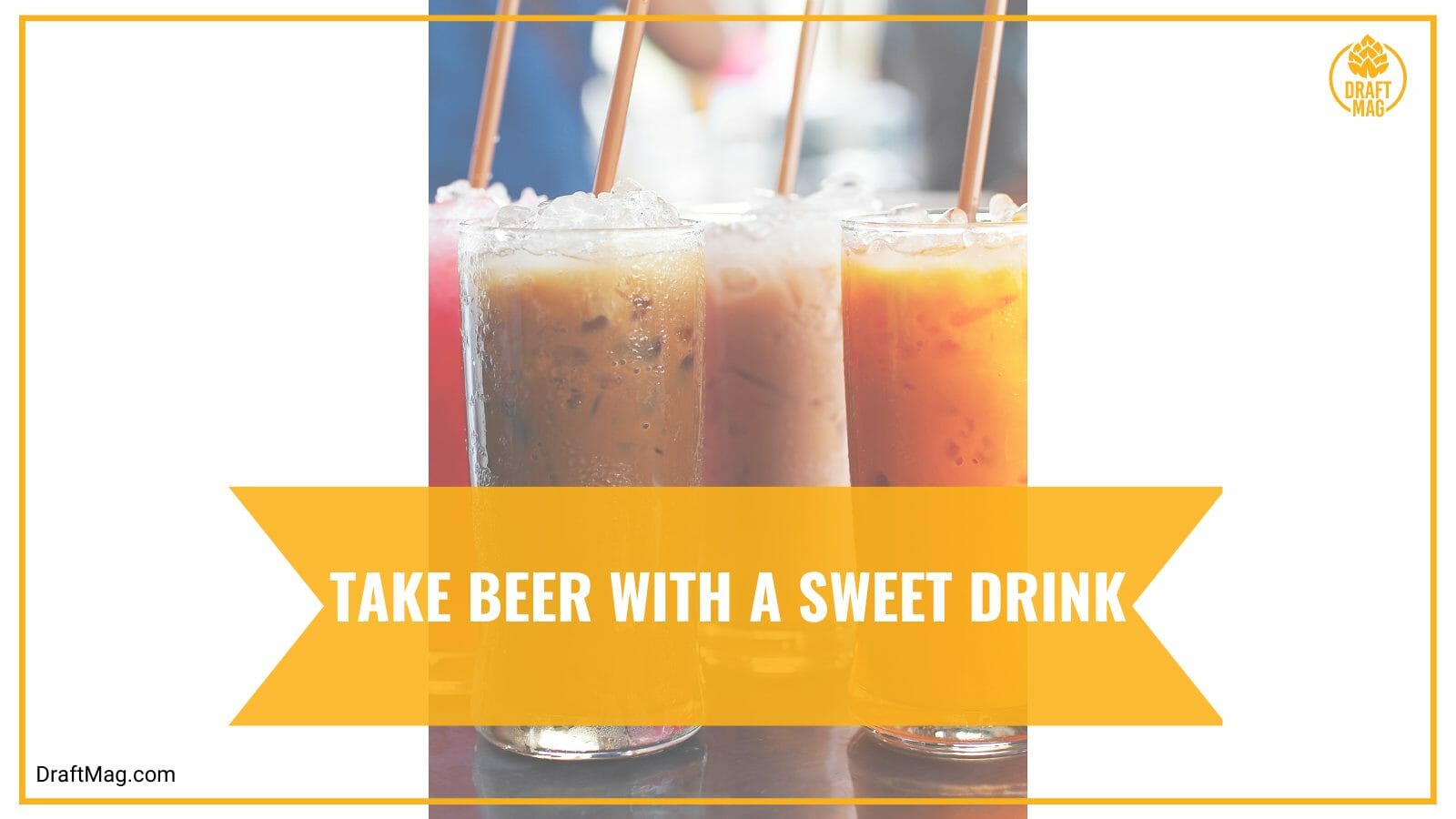 Just follow any of the steps highlighted above and you’ll drastically reduce the taste of alcohol on your palates. If done properly, like drinking beer with a straw while aiming for the back of the throat, you’ll likely skip the taste altogether.

The best and most practical way to like the taste of beer is to drink more beer – of course not in one sitting as that would be irresponsible. Beer is an acquired taste which means that over time, the beverage will grow on you and your palates will begin to enjoy what they used to hate.

Other methods include starting with beers with no or low bitterness (IBU) like rice beers then making your way up. Just start taking the sud, albeit in small quantities, and before long your palate will love it.

If you’re brewing your beer at home, the trick to having a less bitter ale is to reduce the boiling time of the hops. Thus, if you’re required to boil the hops for 10 mins, reduce the time to 5 mins. This is because the less time the hops boil, the fewer oils they release into the mix. 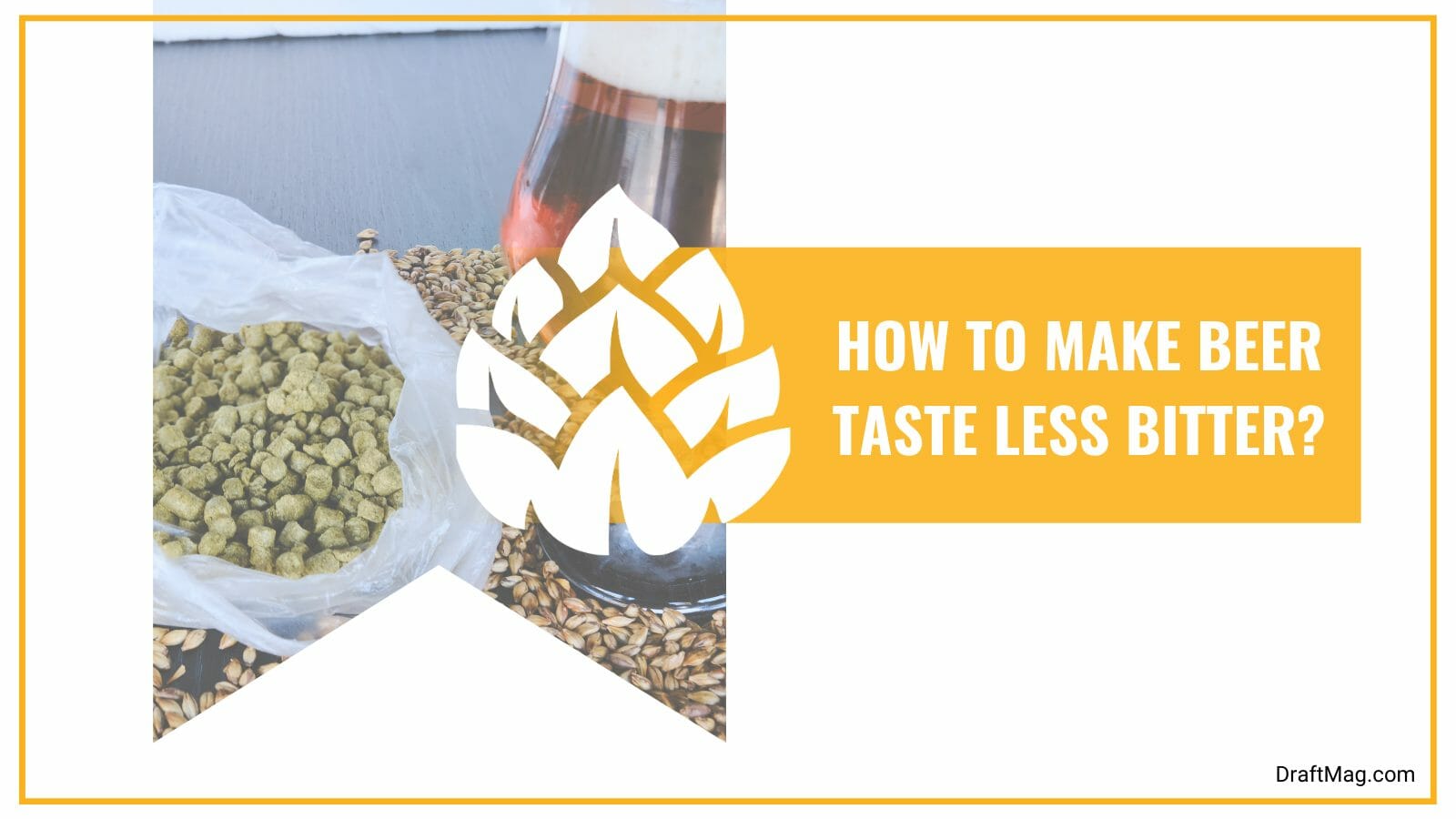 However, for patrons who have already purchased their suds, one great way to reduce the acidic taste is to add soda, popularly referred to as Shandy. You can also add citrus to the beer or a margarita to balance the taste.

How To Drink Beer Without Getting Fat

The first step is to look out for and drink beers that contain less than 100 calories like Dogfish Head Slightly Mighty, which has 95 calories, or Le Petit Prince, which has 75 calories. The next is to take about one or two bottles a day or just limit beer drinking to the weekends. This is because the more your chug your favorite ale, the higher your chances of getting fat.

Craft beer tastes bitter and most people who drink it for the first time are repulsed by it, but they soon acquire the taste and begin to enjoy it. If you are thinking of drinking your first ale or are repulsed after taking a few beers and want to skip the bitter taste for now, here’s a summary of how to go about it:

Take note that some of these methods like aiming for the back of the throat could either result in choking, retching or throwing up, so exercise some caution. Adding a margarita could also spike your drink, therefore, add it with caution.