“Is beer acidic or basic?” is a common question among people with acid reflux or GERD symptoms. Everybody just wants to enjoy a nice occasional drink with friends and family, but heartburn and other problems might be a hindrance. 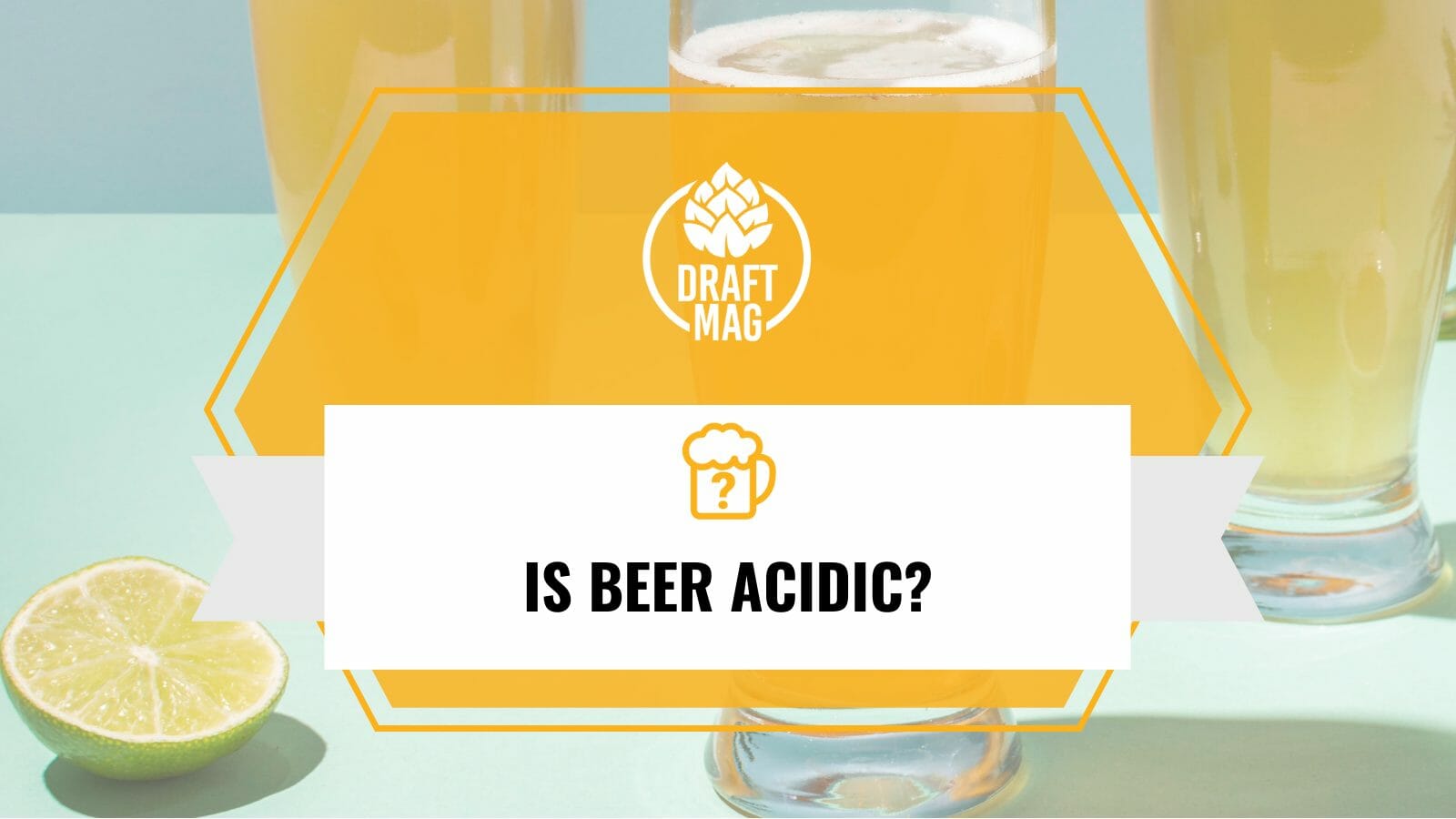 However, if you do a little research, you’ll realize that most beers won’t worsen your condition as long as you drink beer in moderation. To prevent worse scenarios, you need to know if your beer is acidic and this guide provides a detailed explanation of the acidity of beers.

Are Beers Acidic or Basic?

Beer is partially acidic, with barley malt lagers having pH levels ranging from 4 to 5. Acidity adds to the pleasing tartness of beer, and pH levels vary according to the beer style. Almost all drinks considered drinkable and refreshing contain acidity to balance the sweet elements.

The maximum acidity that a beer should contain is between 220 to 500 parts per million (ppm). However, most beers contain about 0.1 to 0.3 percent of acidity and this amount goes from 1000 to 3000 parts per million. Malt-adjunct worts don’t produce as much acidity in beer as all-malt worts do.

The majority of ordinary malt-adjunct beers will have an acidity level of around 0.1 percent, while all-malt beers will be closer to 0.2 percent.  Acidity levels in light beers can be as low as 0.07 percent  (or 700 ppm). Ales are a little different, with pH ranging from 3.00 to 6.00. Sour beers like Berliner Weisse, Belgians Lambic and other craft brew sour ales can have a pH as low as 3.30. Although the acidity level is largely due to organic acids, the carbonation level adds to the acidity level of many beer styles.

An extremely high acidity could result from bacterial infection of beer or wort. Microbial contamination problems like lactobacillus strains lead to high acidity and most brewers usually perceive it before any testing. However, acidity in beer helps preserve it from many food spoilage and pathogenic microorganisms which grow in a low pH environment. The acidic nature of beer, alongside its carbonation, presence of a significant amount of lacy and lack of oxygen, has helped make beer a potable, safe beverage throughout history.

– What Makes a Beer Acidic?

A beer’s acidity is a result of the entire fermentation process. Yeast consumes the sugars in the wort during the fermentation stage of brewing beer, turning them into carbon dioxide and alcohol. However, fermentation also produces a few additional by-products such as organic acids acetic and succinic acid. 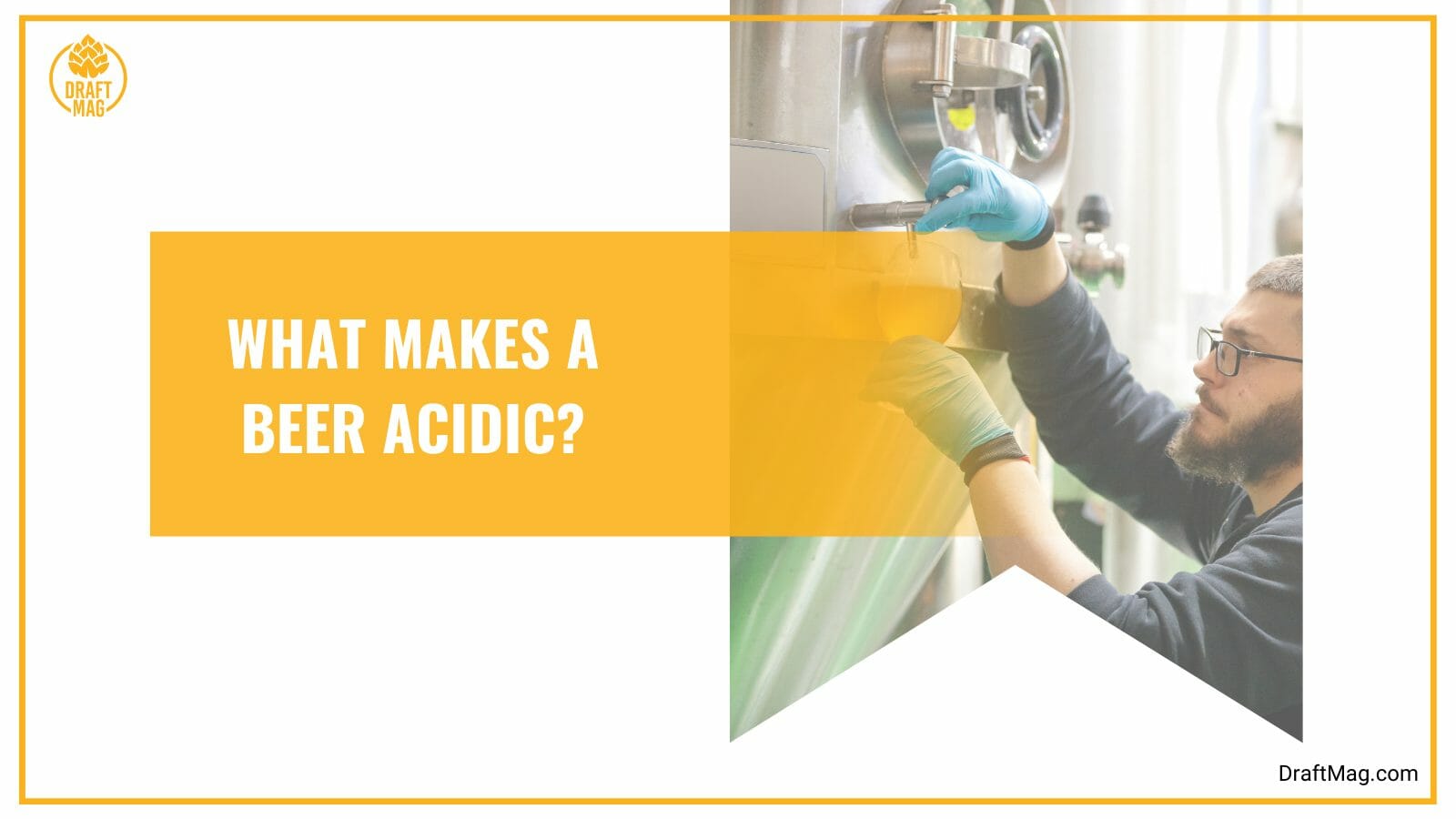 Both of these acids can raise the pH of beer, giving it a crisper, more refreshing flavor. So whenever a beer is referred to as drinkable or refreshing, it is often due to the acidity, which balances the sweetness in the beer. Next time you see a beer review that is called refreshing, prepare your mind to get a significant amount of acids.

Many believe that cutting alcohol from beer makes it non-acidic, but it is not valid. Even though the acidic components of beer are formed during fermentation, some organic acids are also formed in production and they are not removed.

Sour beers are among the beer varieties considered when discussing acidity. Acidity in this context indicates sourness or bitterness. Some brewers of these beers could refer to titratable acidity (TA) rather than pH. Although pH scale is crucial when discussing how acidic a beverage is, the TA can provide more information on the beverage’s flavor. Two different beers with comparable pH values could have different levels of sourness. 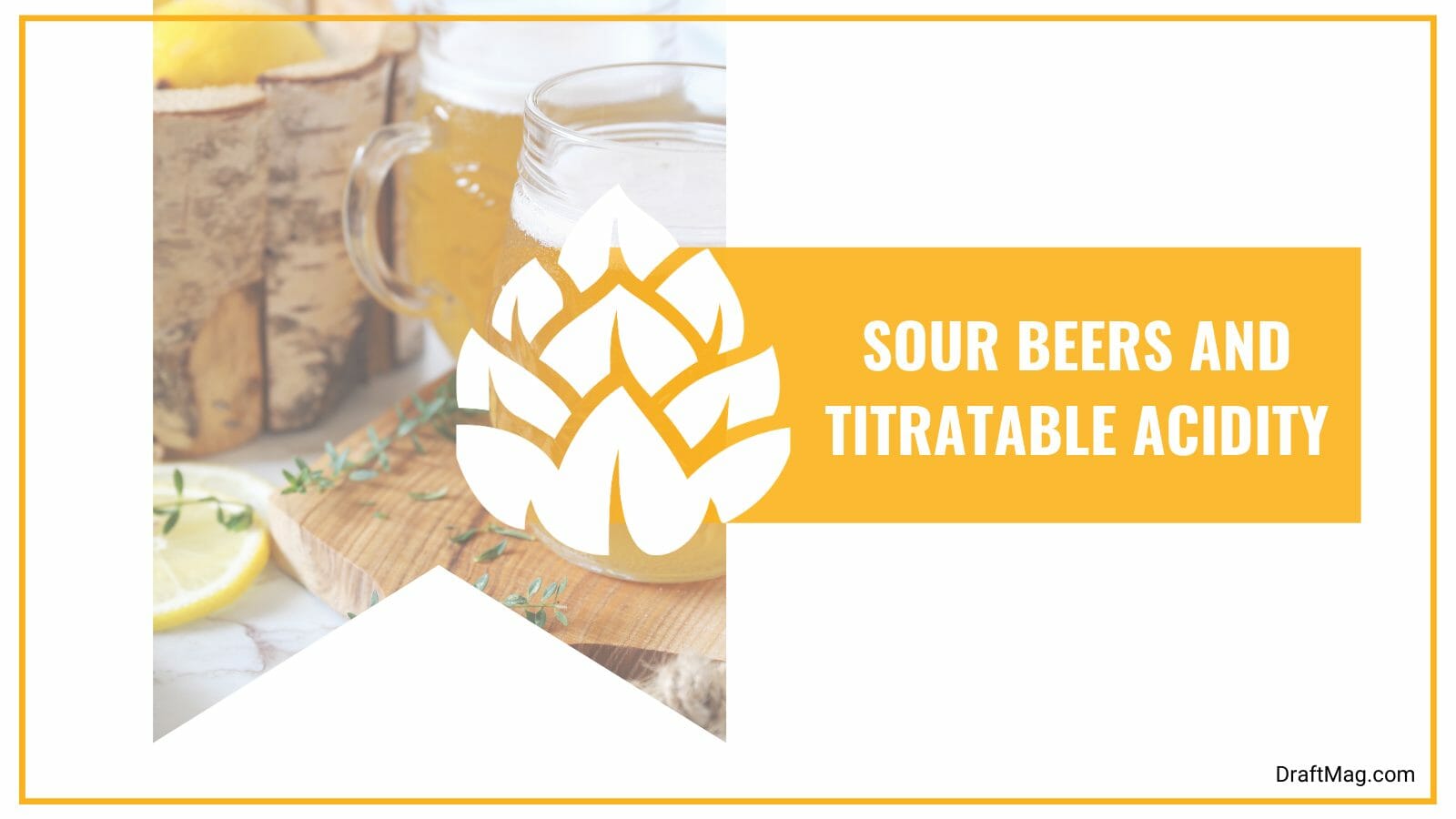 Titratable acidity is the number of grams of acid in one liter of beer. It is possible to quantify lactic, acetic, citric, and phosphoric acids in this way. For instance, Strawberry Fields is a sour beer brewed by Indeed Brewing Company and it has about 11.5 grams per liter TA. Your lips will slightly pucker.

Orange juice, on the other hand, contains 8–14 g/L of citric acid by TA. Here is a scale to help you understand the TA amounts in different beers:

Surprisingly, some beers like Lambic have a low pH because of the bacteria strains used in producing the alcohol.

Alkalosis happens when the pH level exceeds 7.45 and is mainly caused by excessive vomiting, diarrhea, or specific drugs. Acidosis occurs when the pH falls between 7.35 and is caused by dehydration, diabetic ketoacidosis, or a heart attack. The possible symptoms are weakness, disorientation, nausea and cramping. Some possible symptoms are rapid breathing, an erratic heartbeat, and unconsciousness.

Many beers contain alcohol, which can trigger the symptoms of GERD or acid reflux. Beer can certainly worsen your GERD symptoms, especially when consumed in excess quantity. Additionally, beer has lots of calories, which can increase the production in your stomach, causing more acids to build up in your esophagus. Because of this reason, it is advisable to watch the amount of beer you consume in a sitting. 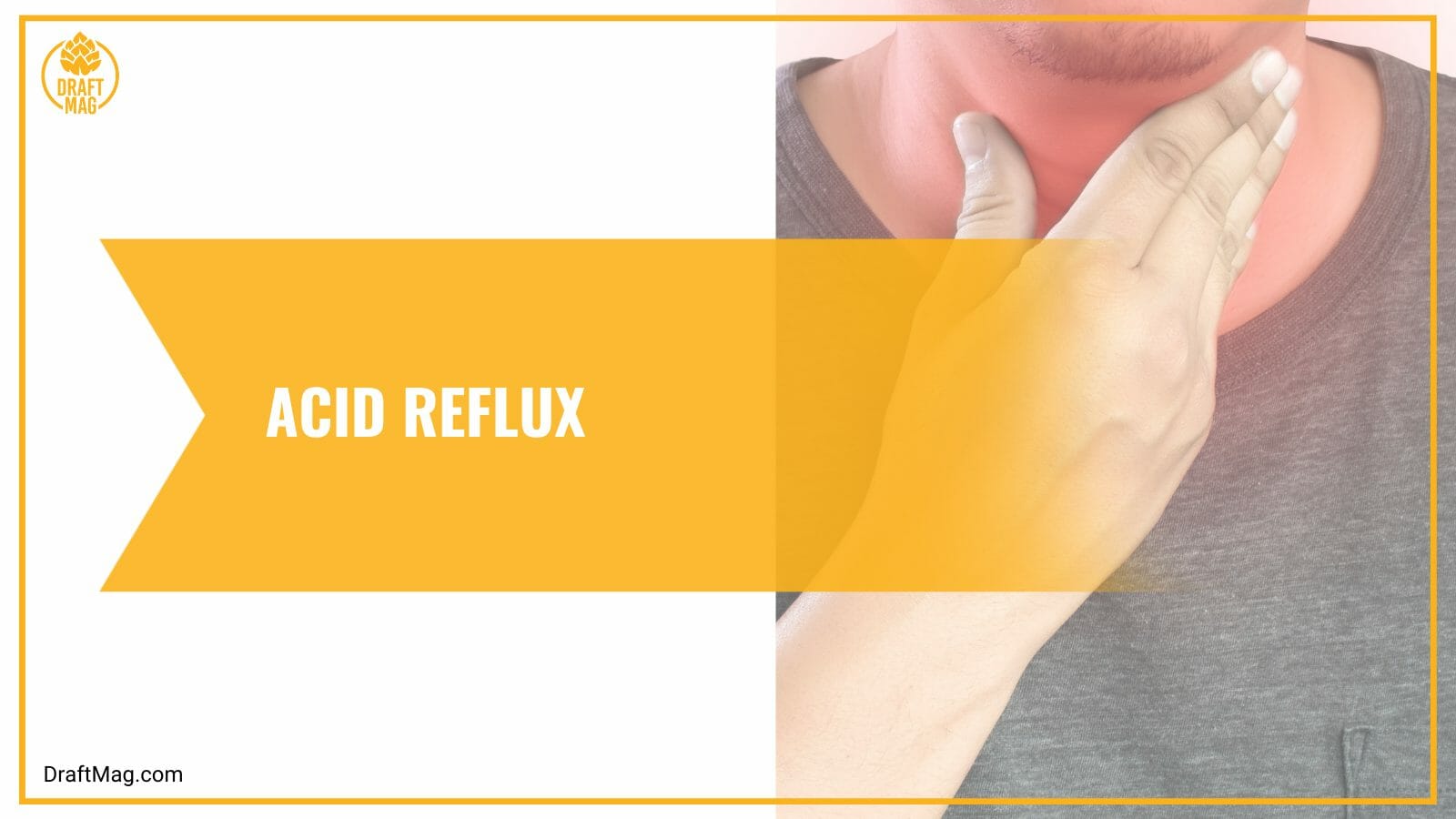 If you want to try beer, check how your body reacts to beer. You can go for a beer with reduced acids and using antacids before drinking can help you consume beer without complications. However, it is better to discuss with a medical practitioner to know where you stand.

What Beer Is Suitable for Acid Reflux?

The most suitable beer types for those who are dealing with acid reflux symptoms are barley malt lagers and barleywine. Barley malt has naturally low levels of acid, so these types of beer have way less acids compared to other varieties.

You could presume that non-alcoholic beer is the best choice for people with GERD and acid reflux. That is not entirely true. Remember that many non-alcoholic beers include acids that trigger your stomach to produce acid in excess. Even the options that don’t contain acid can still upset your stomach.

The only benefit of alcohol-free beer is that it produces significantly less gas than beers that include alcohol. This makes it a better option for people with acid reflux and digestive issues only based on that. If you don’t feel like doing away with alcohol, then these are the best options to consider:

Barley malt naturally has low acids, so most beers brewed with barley malts have lower acids than other styles of beer. Barley lagers are well balanced with a low pH ranging from 4.0 to 5.0. Examples of barley lagers are Vienna styles, Helles and Pilsner (e.g., Pilsner Urquell). You can also go for pale lagers too. 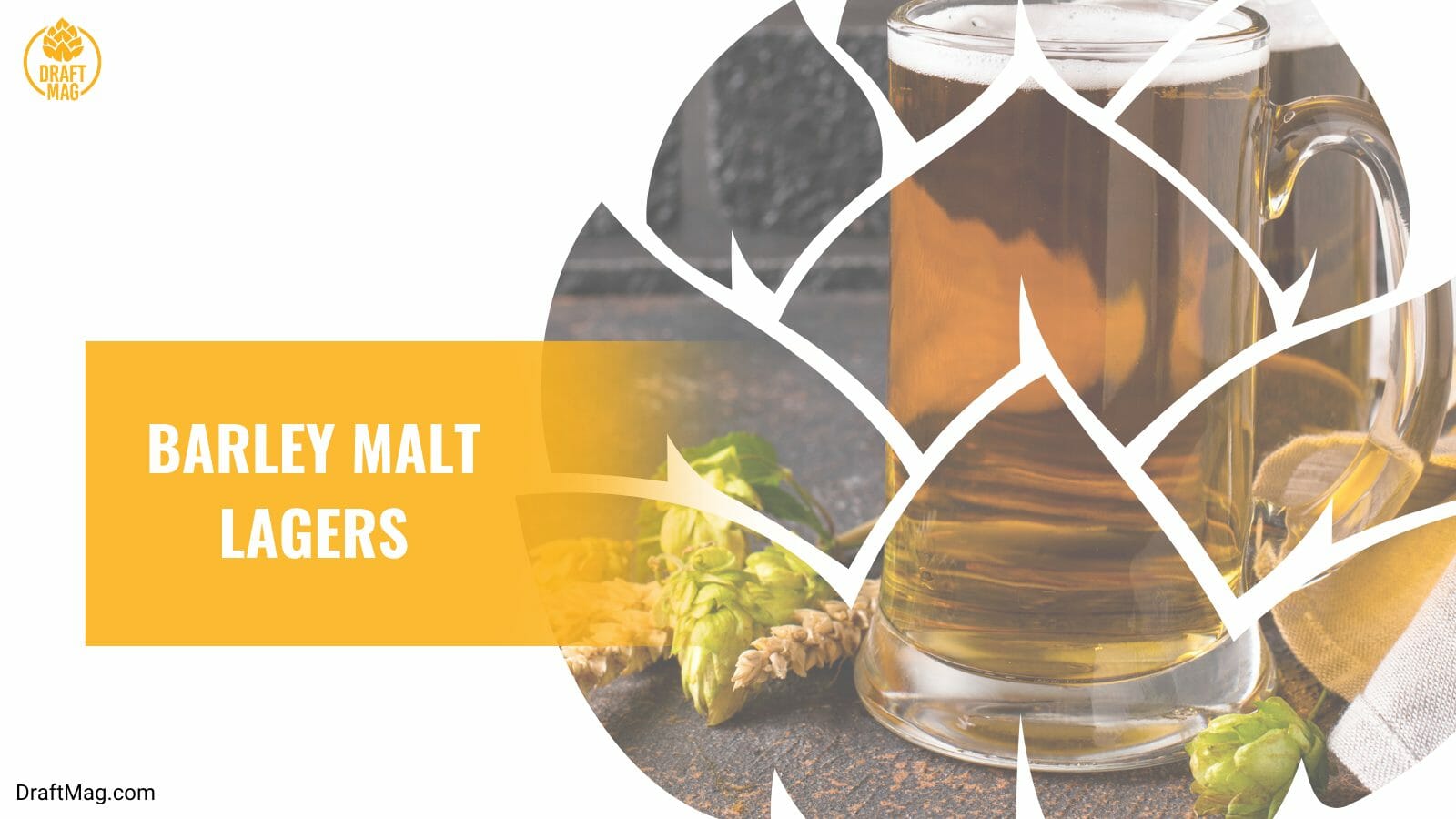 Barley is one of the grains that produce little acids during fermentation. This explains why barley, also known as brewer’s brandy or Pinot noir, is a perfectly good choice for those seeking to do away with acids.

Barleywine has a strong alcohol percentage, but its pH is close to neutral and ranges from 5.3 to 5.8 on the oH scale. These are some of the best barleywines to try out:

Is Beer More Acidic Than Wine?

No; regular beer has a pH ranging from 4.0 to 6.0, but wine is more acidic with about 3.0 or even more acidity levels. Wines contain several organic acids and white wine has a significantly higher acidity than red. 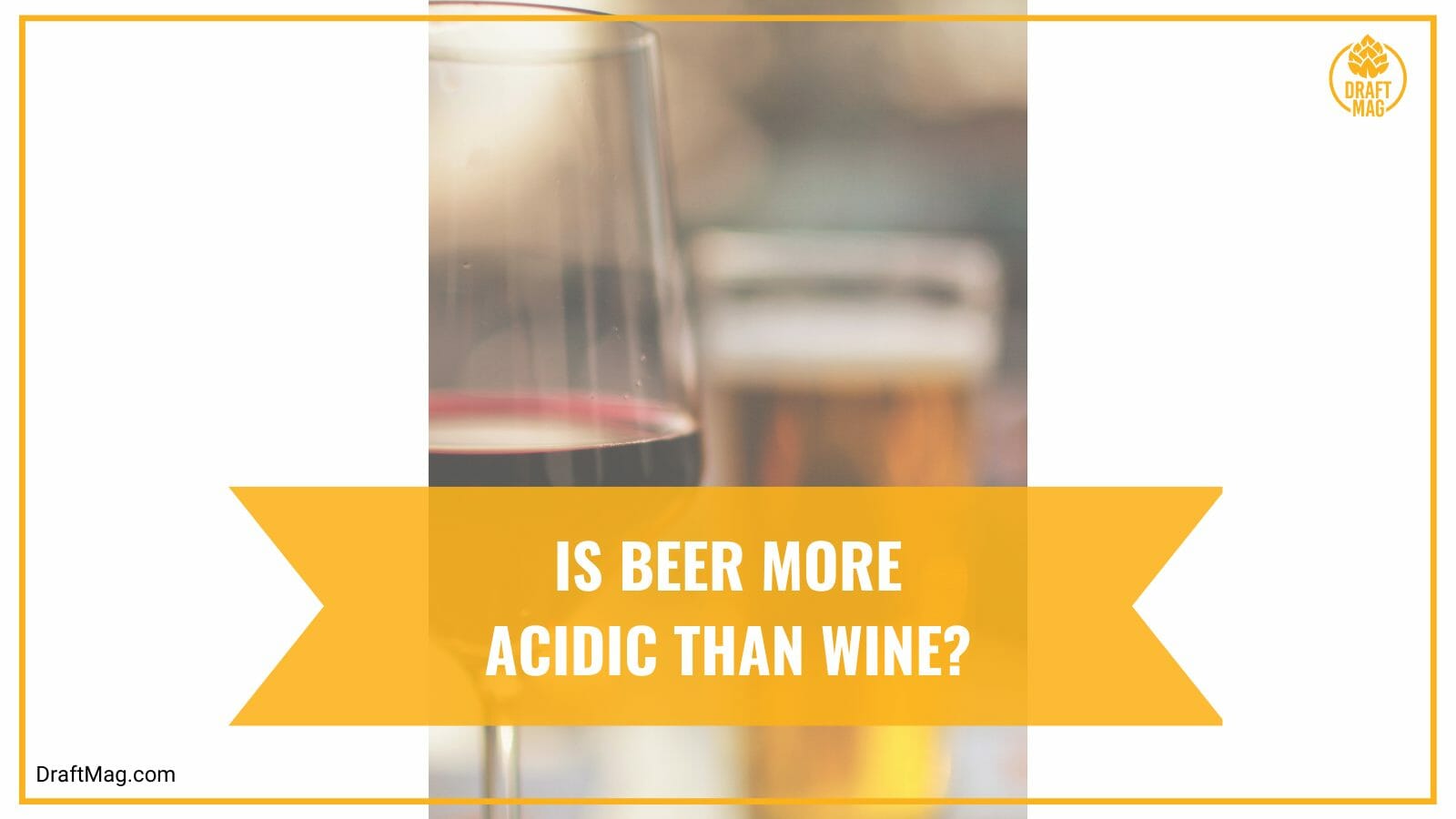 You would be wrong if you believe that wine makes the symptoms of GERD and heartburn far worse. It turned out that when it comes to GERD, beer and wine have a similar impact on the body.

A study comparing beer and wine effects on GERD found no difference. Both beer and wine might make you feel like your chest is on fire. This makes sense, given that the pH levels of the two are not drastically different.

Is Beer More Acidic Than Whiskey?

No; the acidity of whiskey and beer is similar. Whiskey pH is between 4.0 and 5.0 before maturity, which falls to 4.0 and 4.45 pH after a few years. Beer typically has a pH between 4.0 and 6.0, which makes it somewhat less acidic.

However, the differences in acidity between wine and beer are largely the same. In either case, it is best to consume them in moderation to prevent absorbing too much acid. Alcoholic beverages can increase the risk of reflux.

After going through this detailed guide, you should now know whether a beer is acidic or basic. Here is a quick recap of some of the essential points discussed.

Now that you have an answer, you should be able to prevent acidity complications from drinking alcohol. So it is advisable to consume beer in moderation if you’re prone to having acid reflux or GERD symptoms.