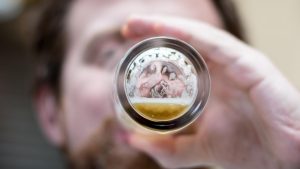 Many beer enthusiasts enjoy a different flavor in their beer, but Skunked beer is a notorious off-flavor that is quite controversial in the beer world.

Many can’t tell the difference, maybe because they are beginner beer drinkers, but ask any seasoned drinker and he would be able to pick out a skunked beer in a jiffy.

If you are wondering what this new jargon is all about, continue reading as this guide tells you everything you need to know about drinking skunked beer.

What Is A Skunked Beer?

The technical term for skunked beer is “lightstruck,” so the next time someone tells you their beer has been lightstruck, you know it’s best to stay away from it. Only bottled beers get skunked because Ultraviolet rays can only enter beer through glass bottles.

There is a reason why many homebrewers especially reach out for dark-brown colored bottles instead of green ones. The dark-brown color keeps the beer safe from UV light, while the clear bottles in this case are an absolute no-no.

How To Tell if Beer Is Skunked

When a beer seems skunked, the minute you open the bottle, you will find an unmistakable aroma of skunk, which may change your mind about drinking the beer in the first place. If you get a pungent odor or a faint smell, you can be sure that this is skunky beer.

What happens when beer is skunked is a complex chemical reaction between the beer and the UV light from the sun. Let’s break this down for a better and easier understanding. Beer has a variety of components that go into its production: hops, grain, yeast, water and appropriate temperatures.

Hops eliminate alpha acids, which lend beer their bitter tastes. These acids are extremely sensitive to sunlight (UV rays) or even fluorescent light and will break down in no time, causing the beer to turn into skunky beer.

When alpha acids break down they immediately react with the sulfur in the beer, hence producing a chemical compound known as 3-methyl-2-butene-1thiol (MBT). This compound is responsible for the skunky smell in the spucky beer.

How To Avoid Getting Your Beer Skunked: One Simple Hack

Your best bet to safeguard your beers from getting that skunked beer taste is to store them in dark brown bottles. Yes, it’s as simple as that.

There is a reason why craft beer comes in brown bottles or cans as opposed to green or clear ones, and this is because brown bottles are like a barrier between the beer and the sunlight. This way, they protect your beer by blocking most of the sunlight.

But again, as easy as the solution sounds, the world is filled with numerous breweries who follow their own respective packaging and marketing. So your other safe bet to avoid experiencing a skunked beer is to look out for what type of packaging the beer you buy comes in. Because, at the end of the day, awareness is everything.

How Do You Prevent Other Off-flavors From Taking Over Your Beer?

The constant change in temperatures of the beer may not get the beer skunked, but it still is an off-point for many brewers and beer enthusiasts. It is good to keep the beer in a cool, dry place away from sunlight. If you plan on carrying your beers for an outdoor event or picnic, it’s best to pack them in a cooler so the temperature doesn’t shift too much.

Besides this, unfortunately, there are other ways beer can get an off-flavor. During the fermentation process, for example, the yeast might overreact with the hops in the wort and produce off or over-buttery flavors. Other compounds which can negatively impact the taste of your beer are acetaldehyde (green apple) or dimethyl sulfide (similar to corn). 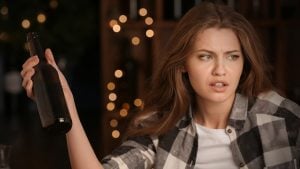 Some people say that a change in the temperature of the beer leads to skunking beer. New age drinkers are advised not to let a refrigerated beer get to room temperature and not to refrigerate it once again. The change in temperatures are said to lead to the beer getting skunked.

Well, folks, this isn’t true at all. A slight change in the temperature of beer doesn’t lead to spucky beer, and, realistically, it is not possible to maintain the beer temperature throughout its life. There are going to be some minor temperature changes.

This is just a myth. To be specific, as mentioned above, skunked beer is a result of being attacked by UV light. With minor temperature changes, you may feel a slight change in the taste, but definitely not skunkiness.

Skunking is just a chemical reaction that happens between the hops and the UV light. If beer is skunked, it doesn’t mean it is a bad beer, it just means the beer wasn’t made like that. It changed naturally.

– Every Beer Gets Skunked Equally

Again, not true. In simple words, the higher the hop content in a beer, the more likely are its chances of getting skunked. If you are drinking an American Lager, the chances of it getting skunked are very low, thanks to its low hop content. On the other hand, IPAs are more susceptible to skunking due to excess hoppiness.

– All Bottles Are Made Equally

One of the best things to practice to avoid skunking your beer is to invest in good dark-colored/tinted bottles. One must absolutely avoid the clear bottles, especially if your beer has a high hop content. The chances are high that your beer may skunk.

On the other hand, buying a keg or a can may be in your best interest as they are absolutely bulletproof from skunking. If your beer is packed in a clear or green bottle, it is mostly already skunked, so if you have already picked one, the best thing to do is to mask it. Add lemon to the beer and enjoy a slightly off-taste. Lime alters the taste enough to cover the skunking.

How Do You Tell the Difference Between Skunked Beer and Funky Beer?

If you wish to cultivate a broader taste palate for beer, it would be good practice to understand how to differentiate between a skunked beer and a beer with a purposefully funky taste. As mentioned earlier, not all beers are skunked beers.

Some just have a louder taste or are generally more pungent. This will help you understand when to give up on a beer, and when to develop a taste for it.

– Flavors That Aren’t for Everyone

Why: Due to lactic or acetic acid

For centuries, the Belgians have been using open-air fermenting and wild yeast methods which cause some unusual flavors in the beer – tart, acidity and sourness. In select styles, sours are considered good and strong-tasting beers, even something beer fanatics would fly to Europe to taste fresh firsthand.

– Why Is This Beer So Bitter?

If your beer is bitter, it is most likely due to a high hops content. The more the hops, the higher the bitterness. These beers are generally considered off-balanced, and different brewers use different ranges of hops to add bitterness and to balance the sweet notes of the beer.

British hops stand out in earthy qualities, while German hops are more herbal in nature. On the other hand, American hops feature flavors of pine and aggressive citrus, which can be too loud for some people.

Why: Aging and oxidation

This is considered beneficial oxidation by many brewers, which usually occurs in barrel-aged beers. The pores in the wood of the barrels let oxygen in and add unique flavors to the beer. These kinds of beers have an after-taste of residual warmth due to the elevated alcohol content. The beer initially tastes citrusy, chocolatey, coffee-like or sometimes even fruity.

Many beginner brewers don’t desire this flavor or methodology of beer making, but some seasoned drinkers prefer and embrace this style.

This happens when the beer has been exposed to the sun. As a human body is susceptible to excess sun damage, similarly, beer is also prone to sun damage. Fluorescent tube lighting causes the worst kind of skunking.

This kind of beer is a no-brainer. You just do not drink it. Pile it away.

How To Keep Your Beer Right: Tried and Tested Ways

If you are a beginner in the world of brewing beer, practice is all it takes to perfect this art. There is not much you can do for a poorly brewed beer, but you can follow these steps to make sure your beer stays fresh for as long as you keep it. 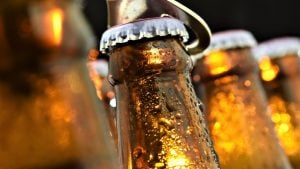 Here are the most important points we learned about skunked beer today.

Now that you are aware of what causes skunked beer and how to prevent it from happening, you can now confidently buy (or make) beer to your heart’s content!