Mold in beer should be taken seriously, and unless you are a microbiologist, do not proceed with drinking a batch of infected beer as some mold species produce mycotoxin, which is dangerous. However, some internet theories suggest that skimming the mold off can save the brew as mold cannot survive alcohol. 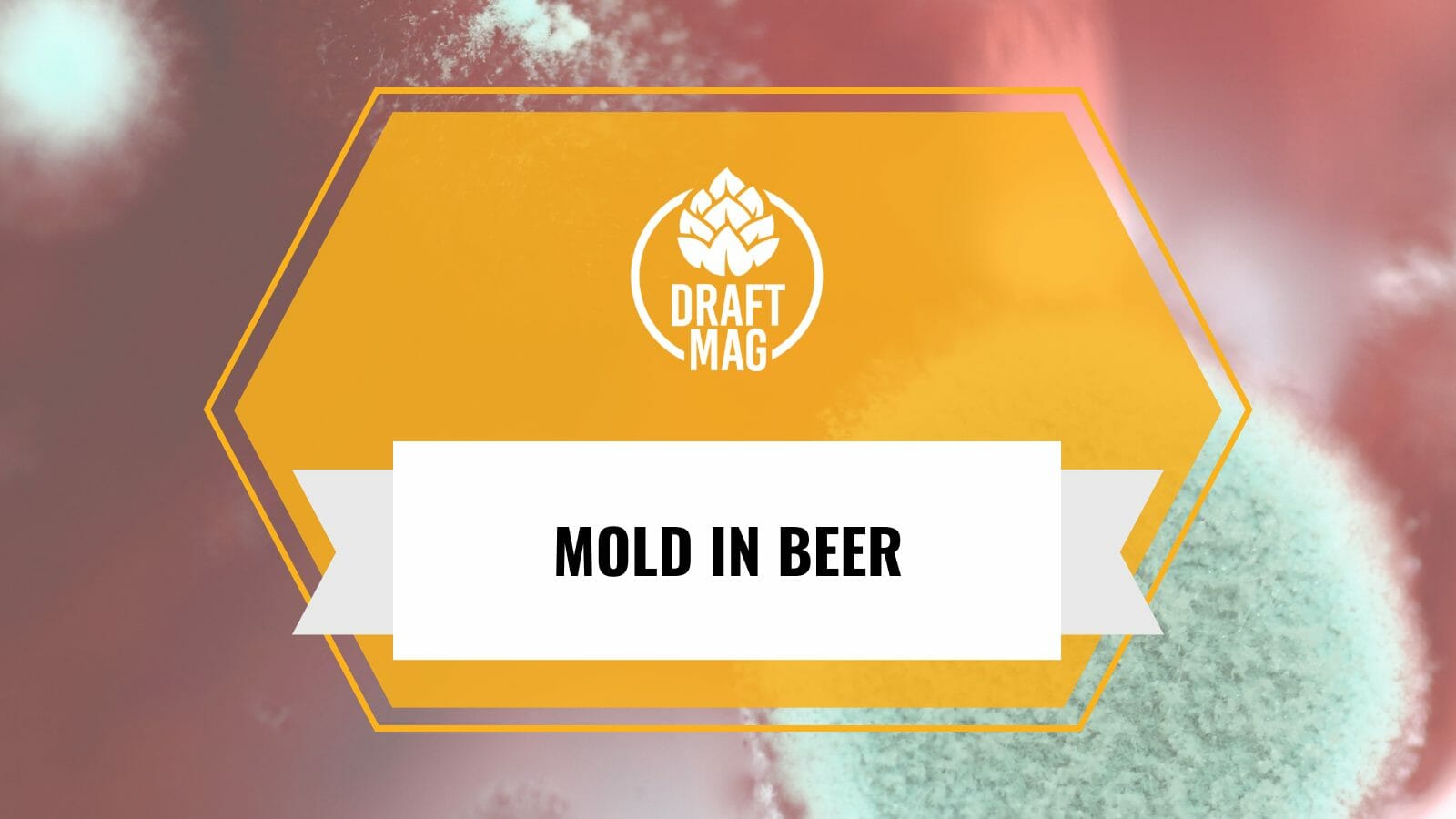 So what should you do with moldy beer? Read this complete guide to decide for yourself.

If There Is Mold in Beer, Should You Drink It or Dump It?

If your beer develops sourness with any sign of white, green, black, or fuzzy spider web-like patches on the surface, it is advisable to dump the brew. According to the USDA, not all molds are dangerous, but some types produce harmful chemicals such as mycotoxins.

Sometimes, molds can also cause respiratory problems, diarrhea, or allergic reactions. However, John Palmer in his famous book “How to Brew,” suggests that infections caused by molds are not dangerous. If the brew doesn’t develop off-flavors, the book recommends skimming the mold off to save it.

Similarly, several theories suggest that molds only live on the surface of the beer and can not survive the alcohol and acidic pH of the beer. According to these theories, moldy beers do not pose any serious risk. However, most homebrewers rely on visible inspection, which is not enough to determine the extent of the infection and the species of mold, as Mycotoxins producing species could cause serious complications.

Moreover, some molds may not alter the taste, or the brewer fails to differentiate it. For instance, it is challenging to identify infections in sour and funky-tasting beers. So, no matter how the beer tastes, if it shows visible mold it is best not to drink it.

Not all; most beer mold species are not dangerous, but some species can cause allergic reactions and respiratory problems. Some species of molds that are found in grain and nut crops produce “Mycotoxin”, a potentially harmful chemical for humans. 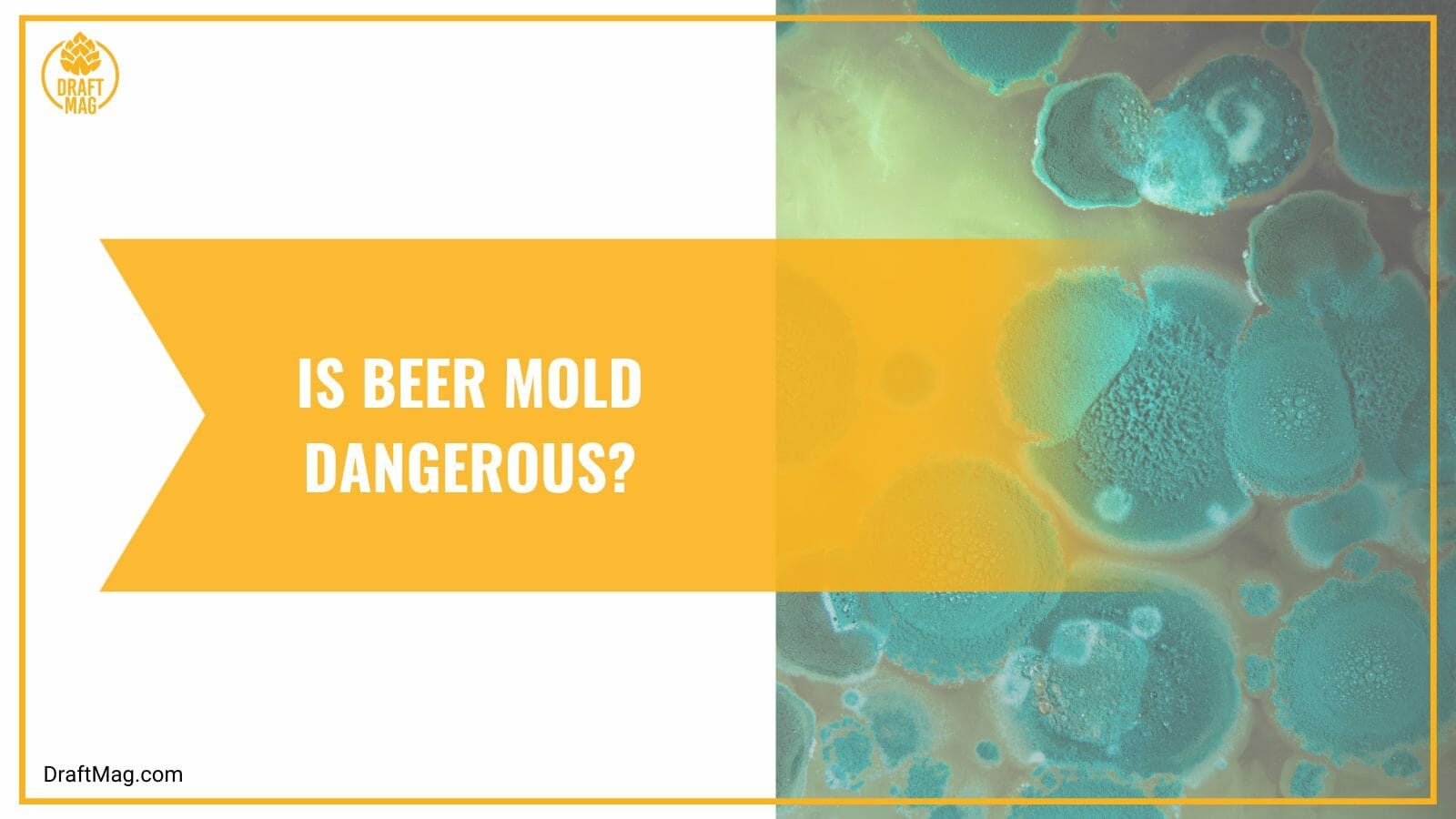 Aflatoxin, a type of Mycotoxin produced by some species of fungi that thrive on field corn and peanuts, is a cancer-causing poison. The good news is that molds are everywhere and the majority are not harmful. Even some species are present in our foods, like blue cheese.

Some most common molds often found on poultry and meat are Botrytis, Aspergillus, Neurospora, Oidium, Penicillium, and Rhizopus. Furthermore, do not confuse mold with bacteria or other microorganisms. Molds are non-chlorophyll plants that require oxygen to survive (aerobes). Molds thrive at room temperature and some species can tolerate even warmer temperatures.

How To Identify Mold in Beer

There are some ways to identify mold contamination in beer. Here are some beer infection signs you should not ignore:

What Causes Mold in Beer?

Mold in beer can potentially develop because of distinct stages associated with the brewing process ranging from raw ingredients and finished bottled beer to taps used to serve the finished beer. 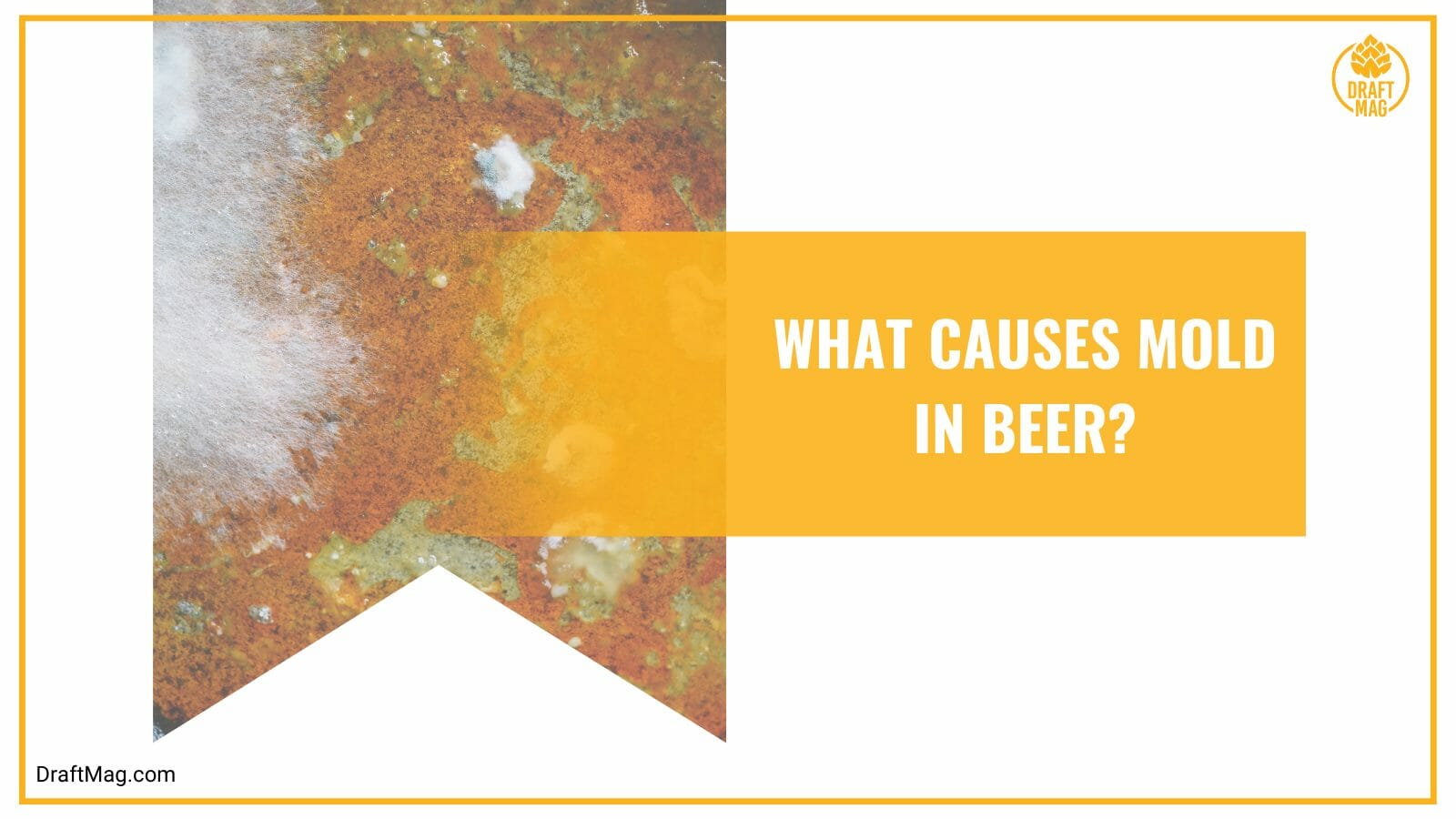 So, to diagnose mold in beer, these are some of the good places to start your search:

The ingredients list is a good place to start diagnosing mold in beer. If moldy malt or hops are used to brew a finished beer, a moldy taste will dominate in that finished beer. Most commonly, the ingredients turn moldy because of their incorrect storage.

This happens when malt, hops, or adjuncts are stored in a highly humid environment or at a higher temperature. These factors contribute to mold and mildew in beer.

When the same machine is used without properly cleaning it, mold or mildew can make their way to the beer fermenter. Moreover, mold in fermenters is especially common for beers with prolonged fermentation processes. Therefore, diligent sanitation is imperative throughout the entire brewing process.

Sometimes, brewers skip keg lines, pipes, and taps during cleaning. Not surprisingly, unrefrigerated lines and taps are highly susceptible to mold as these extend a combination of dark, moist, and warm air (an excellent breeding ground for mold and mildew). So lines and taps need to be properly and thoroughly cleaned regularly to prevent contamination in beer.

Apart from these main attributes, some other causes of mold infection include:

Drinking a few sips of moldy beer is not a big deal since there is little evidence that mold causes serious illnesses or allergic reactions, and most pathogens can not survive in stomach acid. 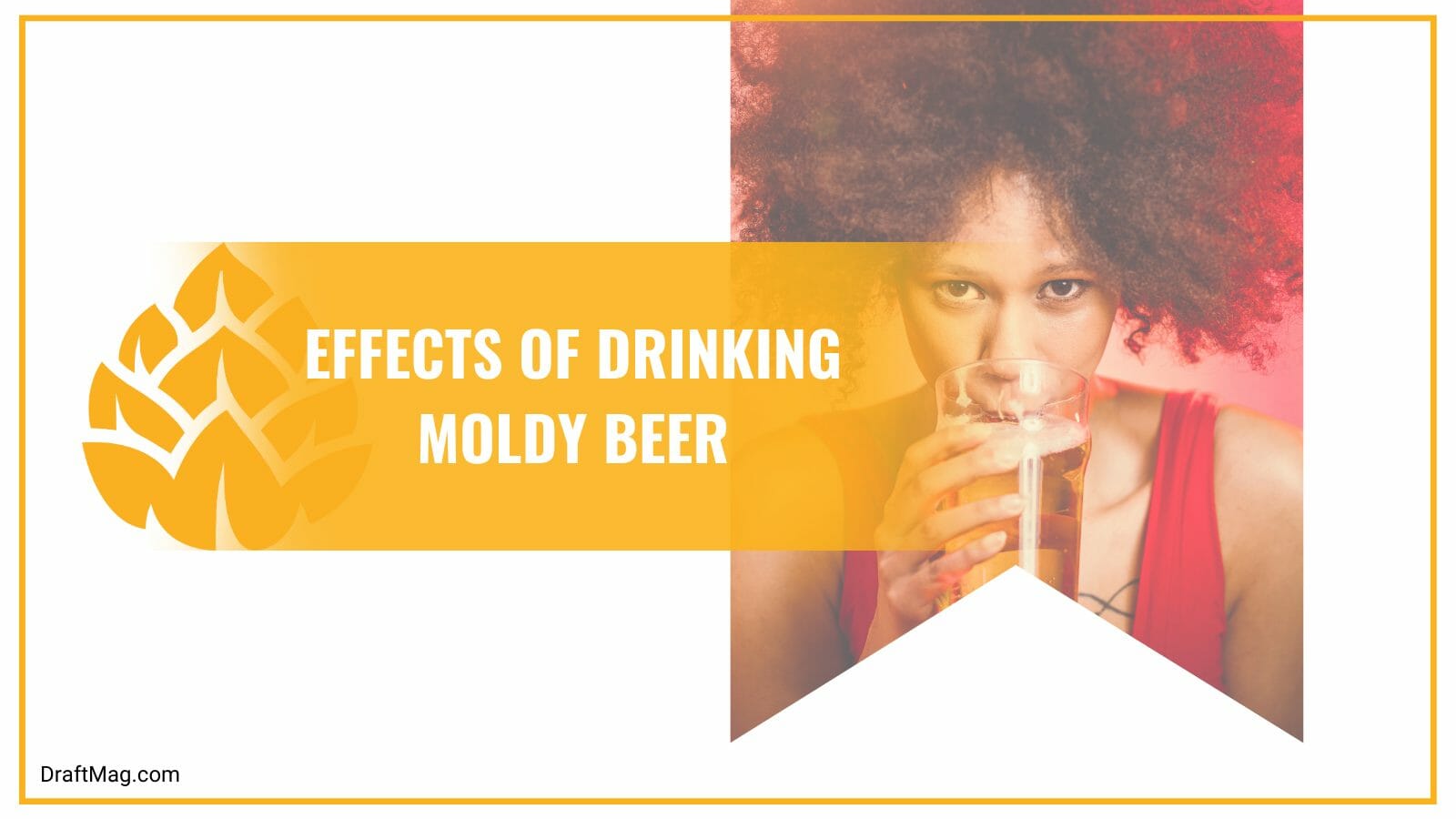 However, the off-flavors could be too strong to bear a sip. Sometimes, a few complaints of an upset gastrointestinal tract show symptoms like nausea, cramps, and diarrhea. Ingesting a high amount of molds may cause:

What Is the Most Common Mold in Beer?

Aspergillus Niger, also popularly known as “black mold,” is the most common fungus that is found in malteries and breweries. It gets its name from the fungus’s dark, almost black spores. It commonly grows in the soil around the world and is considered to be a potential food spoiler.

This robust, thriving nature makes its eradication from the brewery environment complicated. Therefore, frequent cleaning is the only way to keep mold in beer at bay. Talking of the brewery environment, A. Niger is often seen around fermentation and lagering areas, most commonly on refrigerated equipment where condensation happens.

Even though mold spores don’t harm or damage the beer, packaged beers detected with spores reveal poor brewery hygiene. Therefore, several countries have banned the sales of beer detected with an elevated count of A.niger.

Preventing and Managing Mold in Beer

Prevention and management of mold and mildew in beer is easy. First of all, normal brewing practices are enough to kill off spores in hops and grains. Generally, infections in beer happen during fermentation, but some also happen due to improper storage. 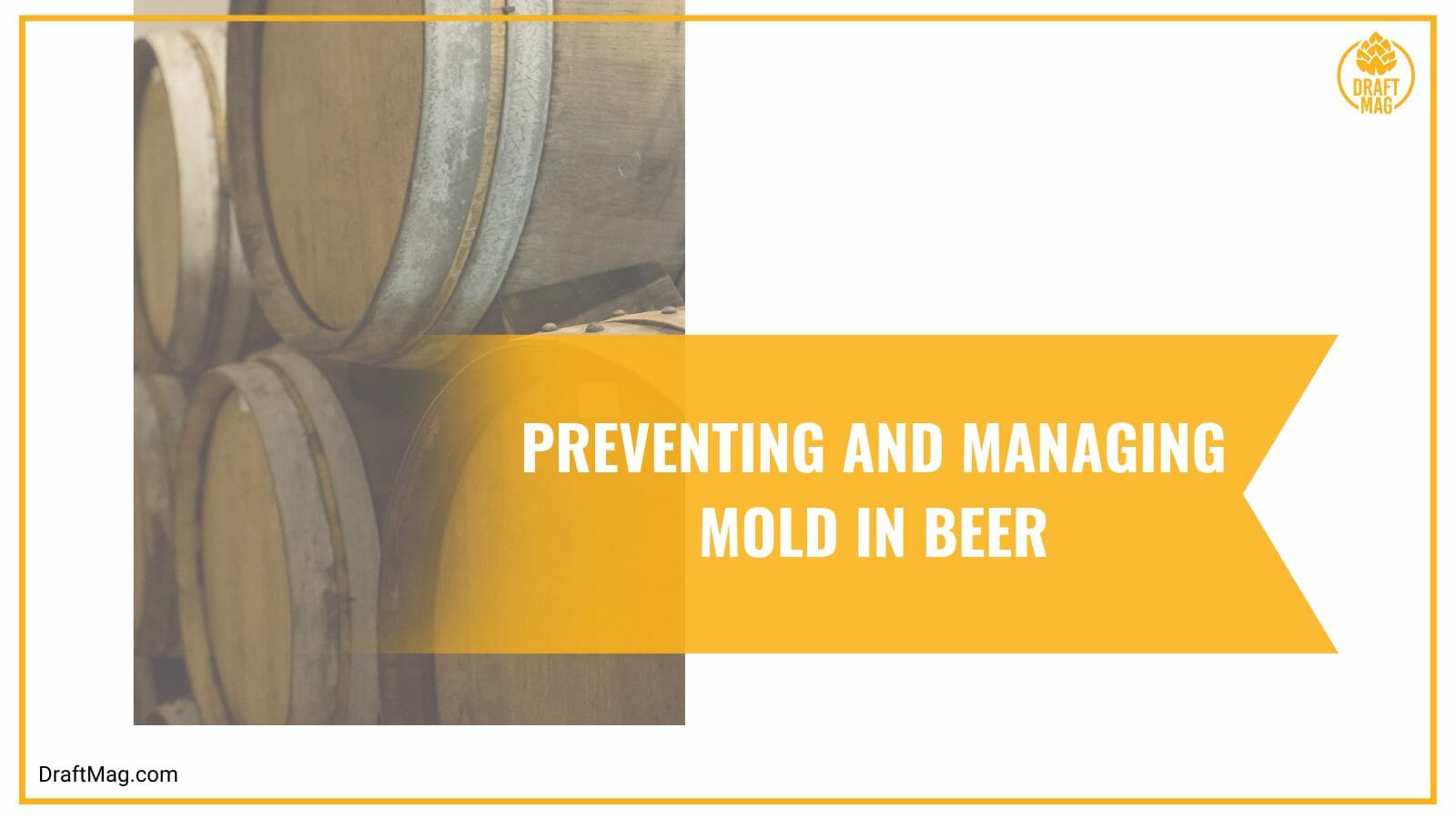 Here are some essential tips to prevent mold in beer:

– Use Fresh and Quality Ingredients

First things first, try to use only fresh and properly stored grains, hops, yeast, and fruits. Rotten fruits or mold-infected grains could become a source of mold toxicity in your brew.

More importantly, as discussed earlier, mycotoxins producing mold species are found on grains, so it is critical to double-check the quality of grains. Also, you must store the ingredients in a cool and dry environment and in sealed containers.

If adding fruit, different ways to prevent the growth of mold in beer include:

Proper sanitation not only prevents mold growth but ensures you get the desired results. Any contamination can lead to the development of bad smells and off-flavors, so maintain a good cleaning ritual and use standard sanitation products to clean your brewing vessels. 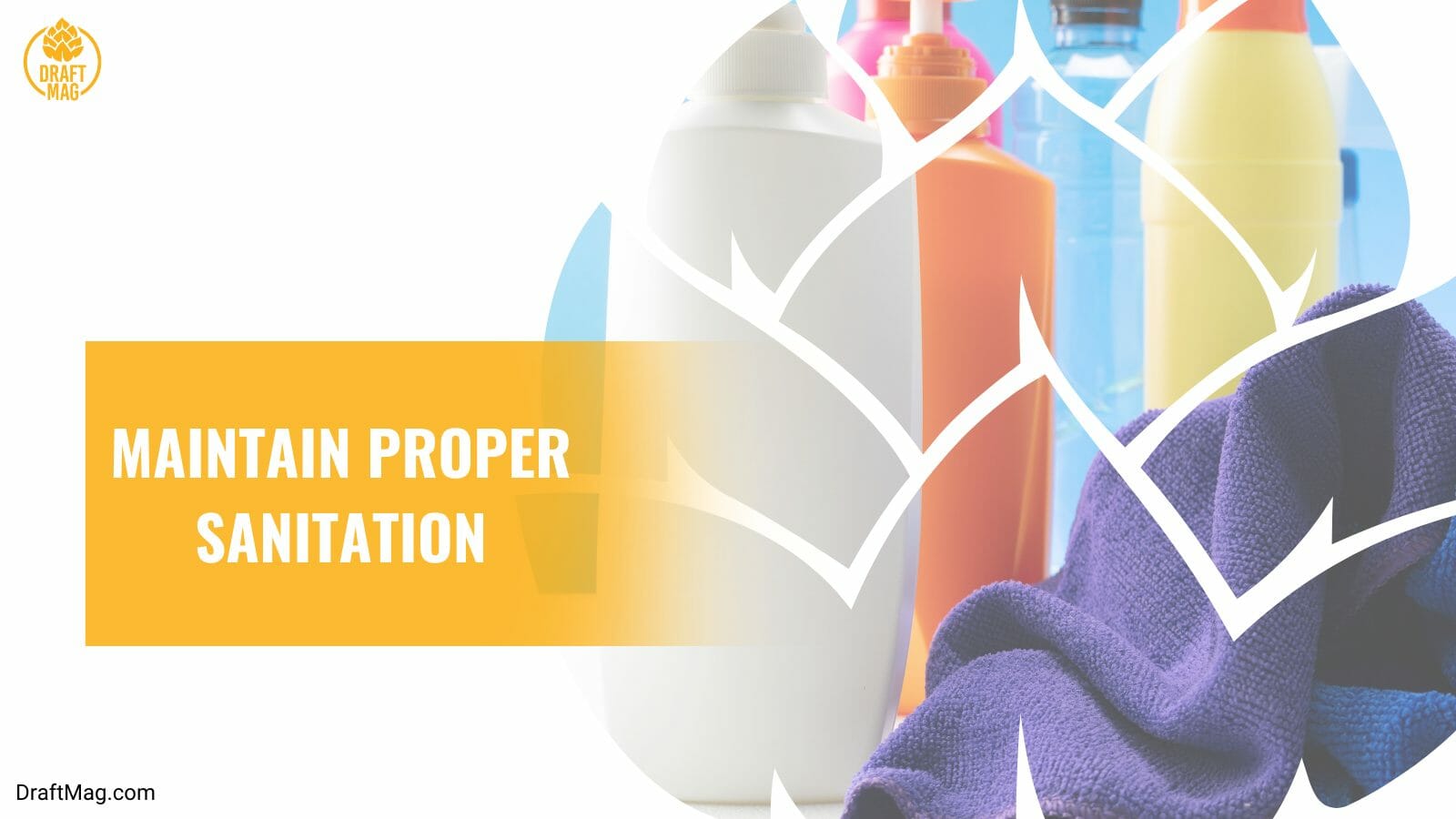 First, thoroughly clean the vessels and later sanitize them with a mix of bleaching powder and hot water. You can also use regular dishwater soap to clean the vessels. Similarly, clean the taps and lines regularly.

If there is any leak in the fermentation vessel, it increases the chances of mold contamination tenfold. So ensure your fermentation vessel is fully airtight. Mold spores need a fine crack to make their way into your brew. Also, store fermenting beer in a cool and dark place.

After fermentation, exposing the beer to oxygen increases the chances of mold contamination. Generally, oxidation occurs during the transfer of beer from one vessel to another, such as when racking or bottling. So always consider deliberate and gentle handling to avoid splashing.

– Use Proper Storage of Bottled Beer

Humid and moist cellars can promote mold growth. Although molds can not penetrate the bottles, they might ruin packaging or labels. The main concern is light and heat. If you find mold on top of beer in a carboy, direct light and improper storage are likely the main reason. 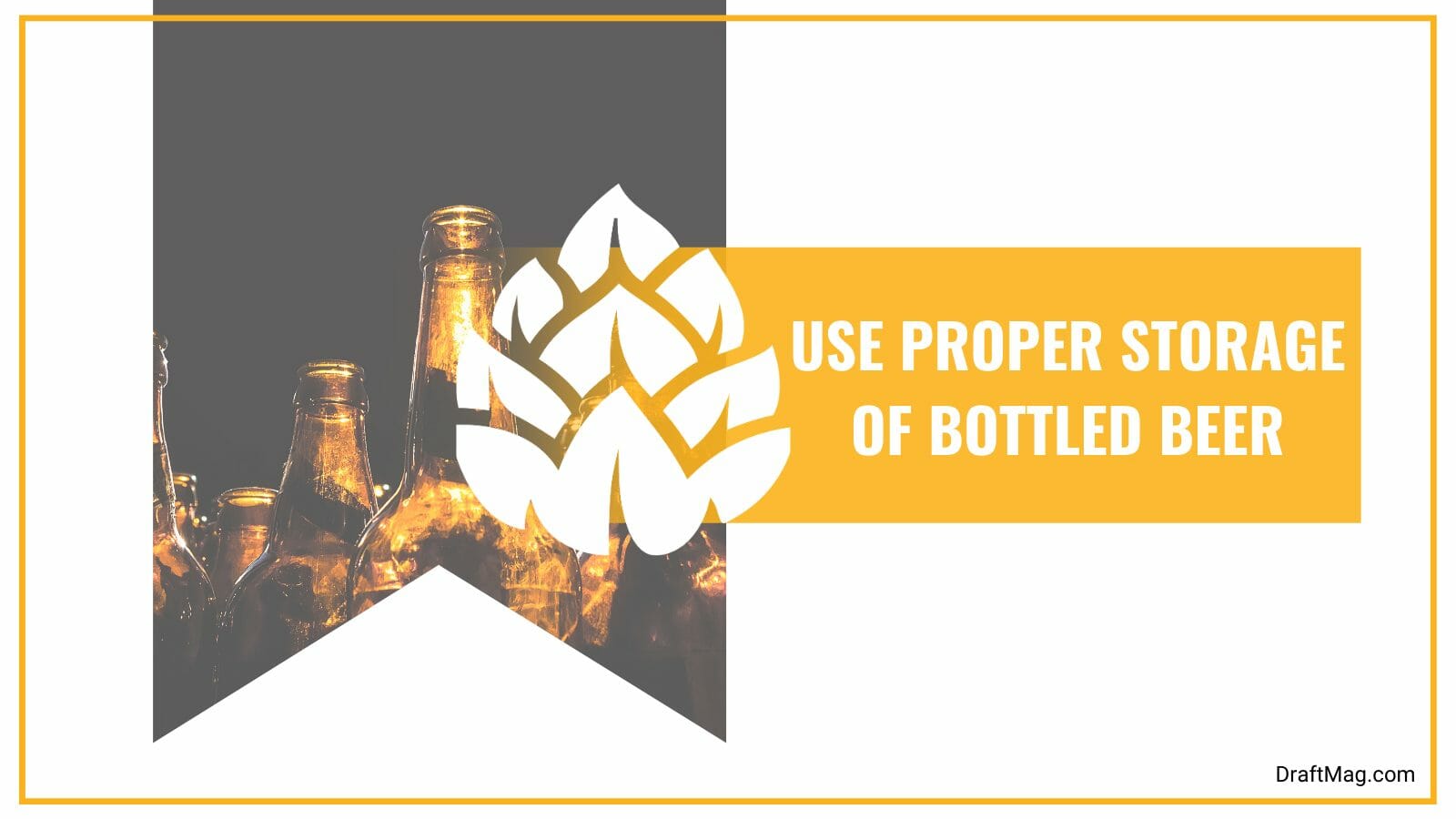 Direct light can break down flavor compounds and may trigger unwanted fermentation, so store your beer bottles in a dark and dry space.

– Get the Right Equipment

Lastly, if brewing is your passion, spend a few extra bucks to get the right testing equipment. Beer is more science than art, so getting testing equipment comes in handy to measure your results at every stage. Necessary equipment ranges from normal pH papers to precision hydrometers. When everything goes as per science, there is no room for molds to grow.

Furthermore, any unusual froth must be investigated properly. Mold can often be seen on the top surface of a finished or fermenting beer as a ring or a layer.

If your brew has been infected, do not dump the batch in a hurry. You spent a lot of time and money to brew a batch, so inspect it twice.

Molds and yeast are types of fungi. Depending on the strain of the brewer’s yeast, it may behave differently during fermentation, so every white film on beer in the fermenter is not likely from a mold infection. For instance, white foam resulting from fermentation and Krausen can easily confuse an amateur home brewer.

If you suspect a mold infection, taste the beer. If it turns out to be perfectly fine, carefully draw out a sample. Contrary to your belief, your batch may still be fit for consumption. If the batch is too large or you face continuous mold attacks, sampling makes sense to find the root cause.

On the other hand, if the brew tastes like tart cherry or vinegar, you may have to dump it.

There are a lot of theories circulating about the safety of drinking a beer infected with mold. 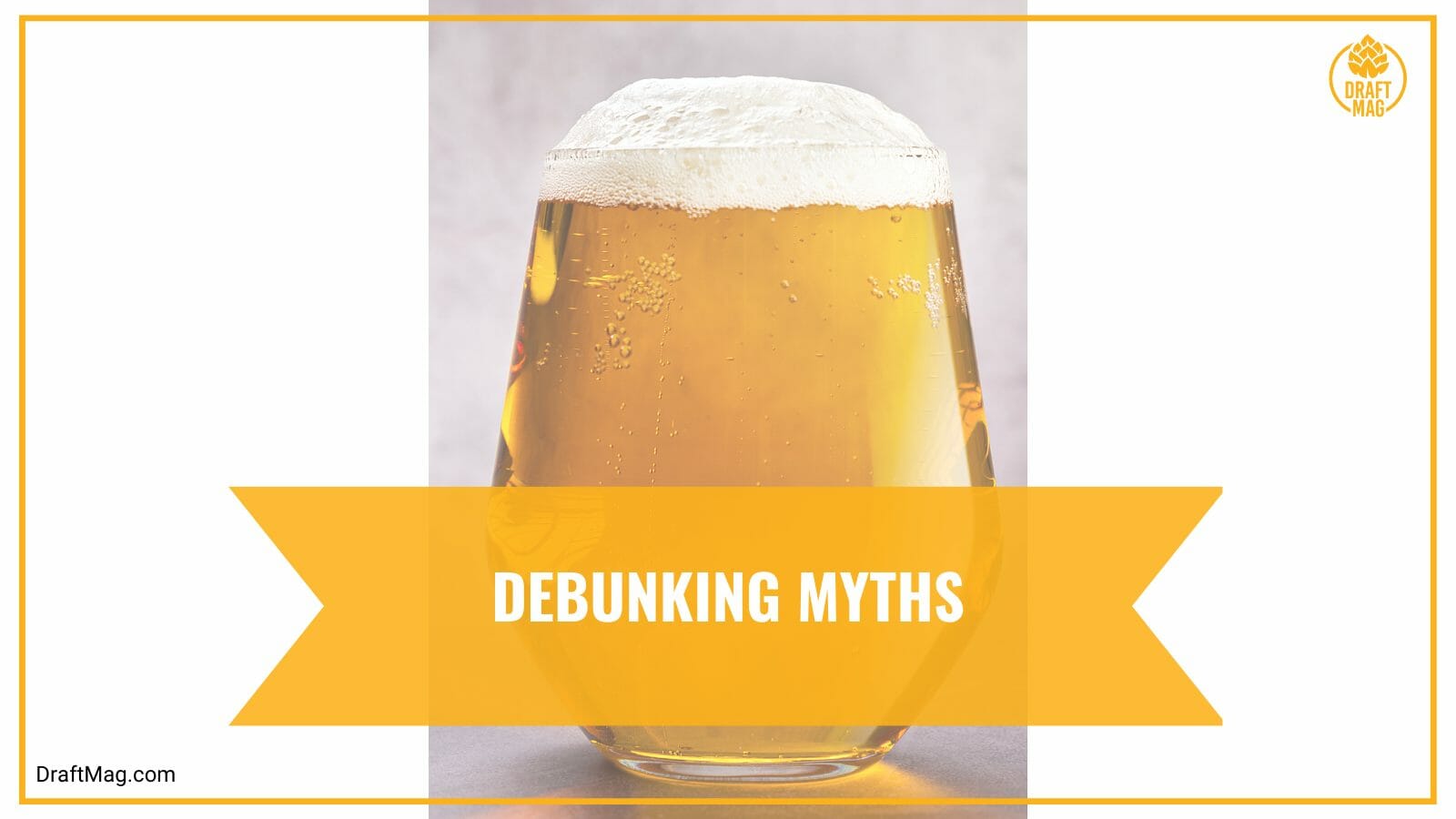 We have tried to answer some of them logically.

Lastly, you never want to taste a ruined beer both in flavor and texture, so it is vital to take beer infections seriously.

– Molds Grow Only on the Surface of Beer

Yes, molds thrive primarily on the surface of beer or any other food. The logic behind this statement is that molds need oxygen to survive, and it is available only on the surface. Certain species may release harmful compounds that can penetrate the surface, but it is not the same for other foods, as tiny threads or “roots” penetrate soft food materials easily.

Mostly, beers infected with molds develop certain off-flavors ranging from tart cherry to vinegar. But in some cases, some may not develop off-flavors, or brewers might misidentify the off-flavor. 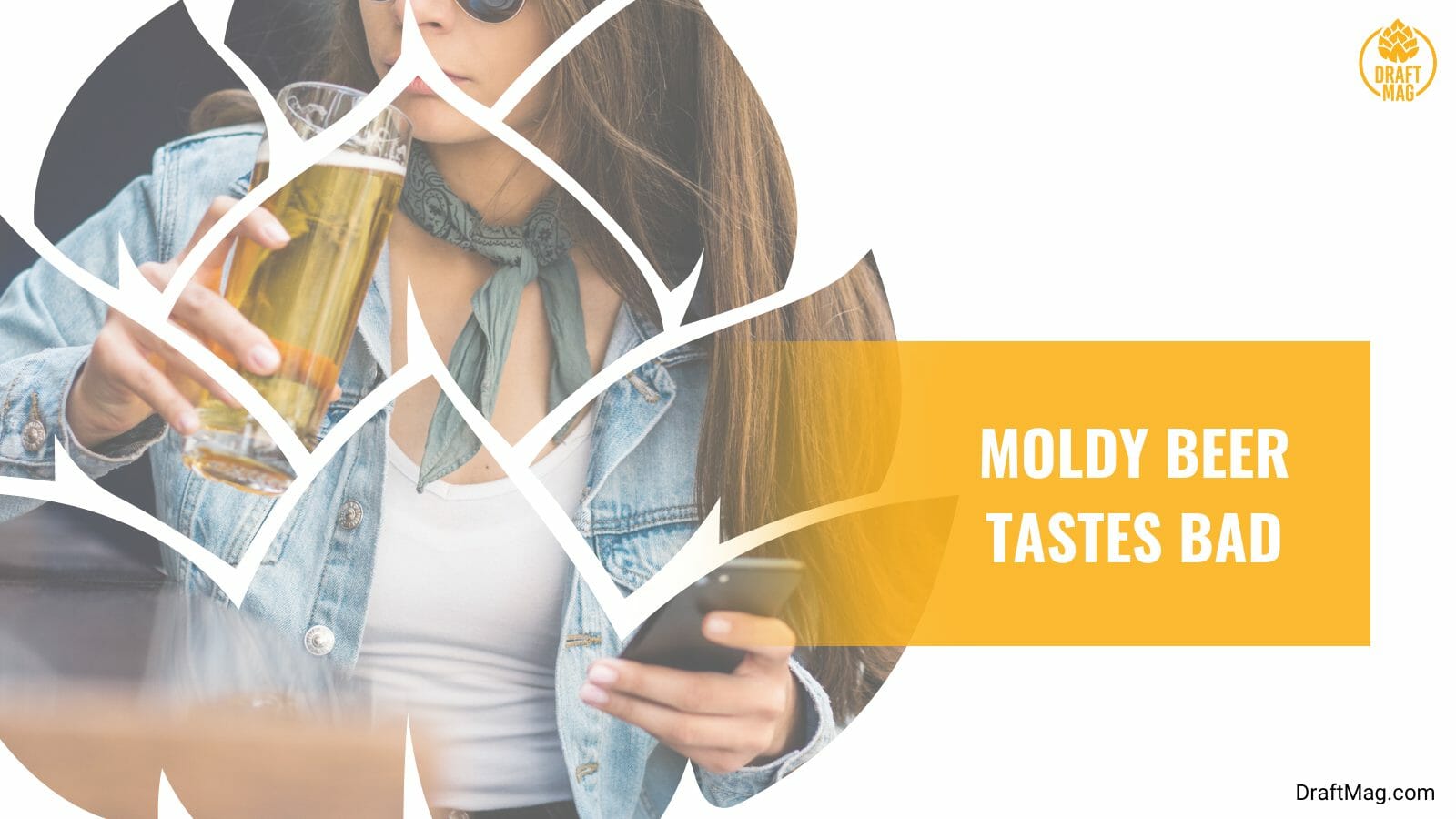 For instance, Brett beers are inherently sour and have some funky flavors. Even seasoned brewers might struggle to differentiate between a stale beer and Brett beer.

In this article, we have discussed what you should do in case of mold in beer. To sum it all up, no homebrewer can ascertain whether mold is toxic or not by visible inspection, so dumping it makes sense.

Homebrewers often face mold in beer, and most of the time, the infected beer does not turn out as you desire. So, toxic or not, off-flavor or not, dumping a batch of infected beer seems a better option.