If the question “How much water is in beer?” has crossed your mind, then you would know that this is perhaps the most essential yet overlooked question about beers. You’ll be surprised that a standard beer contains upwards of 90 percent water, depending on the beer style. 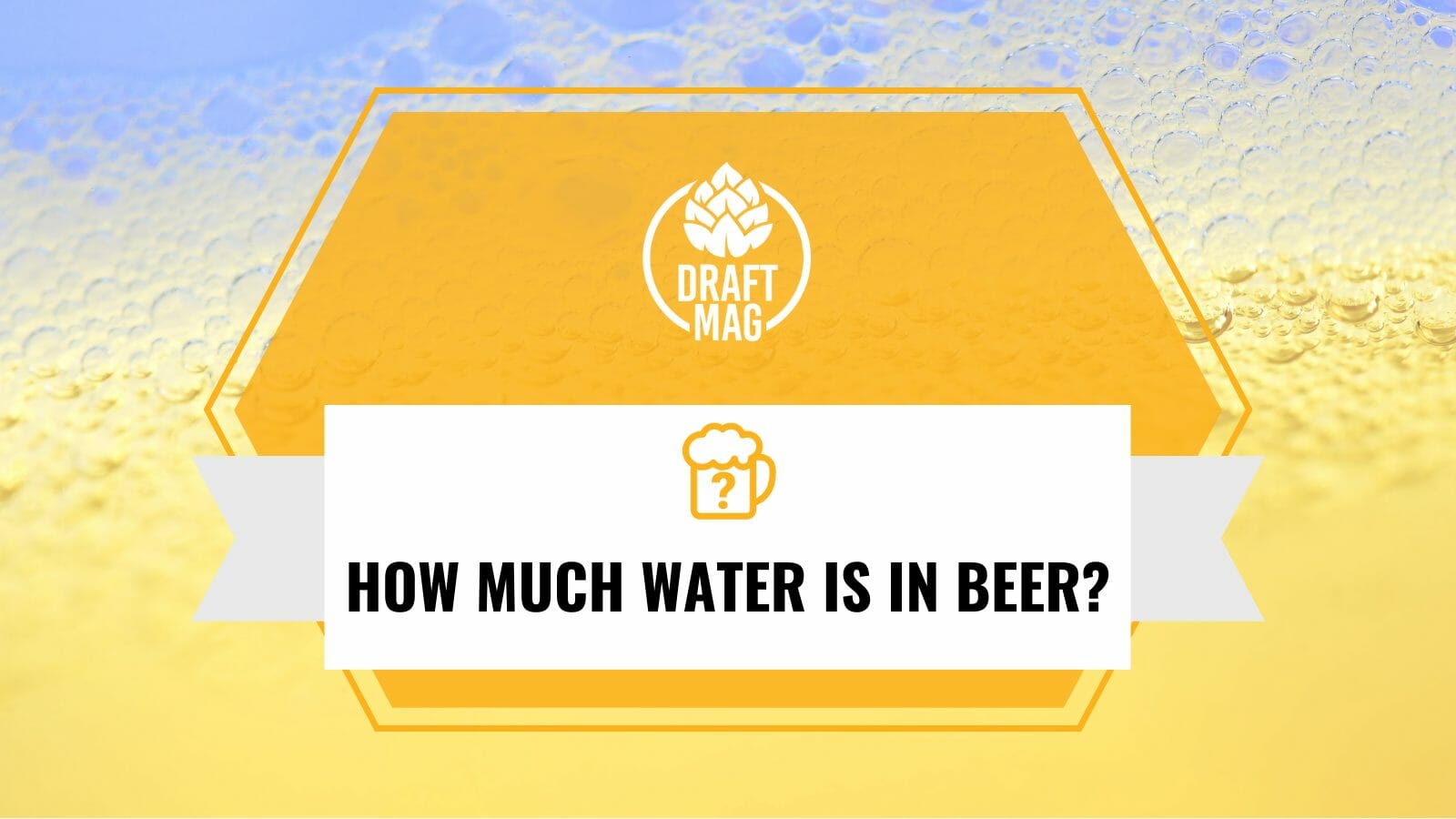 Grab a chilled beer and keep reading this guide as we explore all you need to know about the water content of typical beers and other related beverages.

How Much Water Is in a Can of Beer?

Generally, a regular can of beer contains up to 95 percent water. It’s true that alcoholic beverages contain water, and beers are no exception! In fact, water makes up the bulk of the ingredients in the final beer product itself. 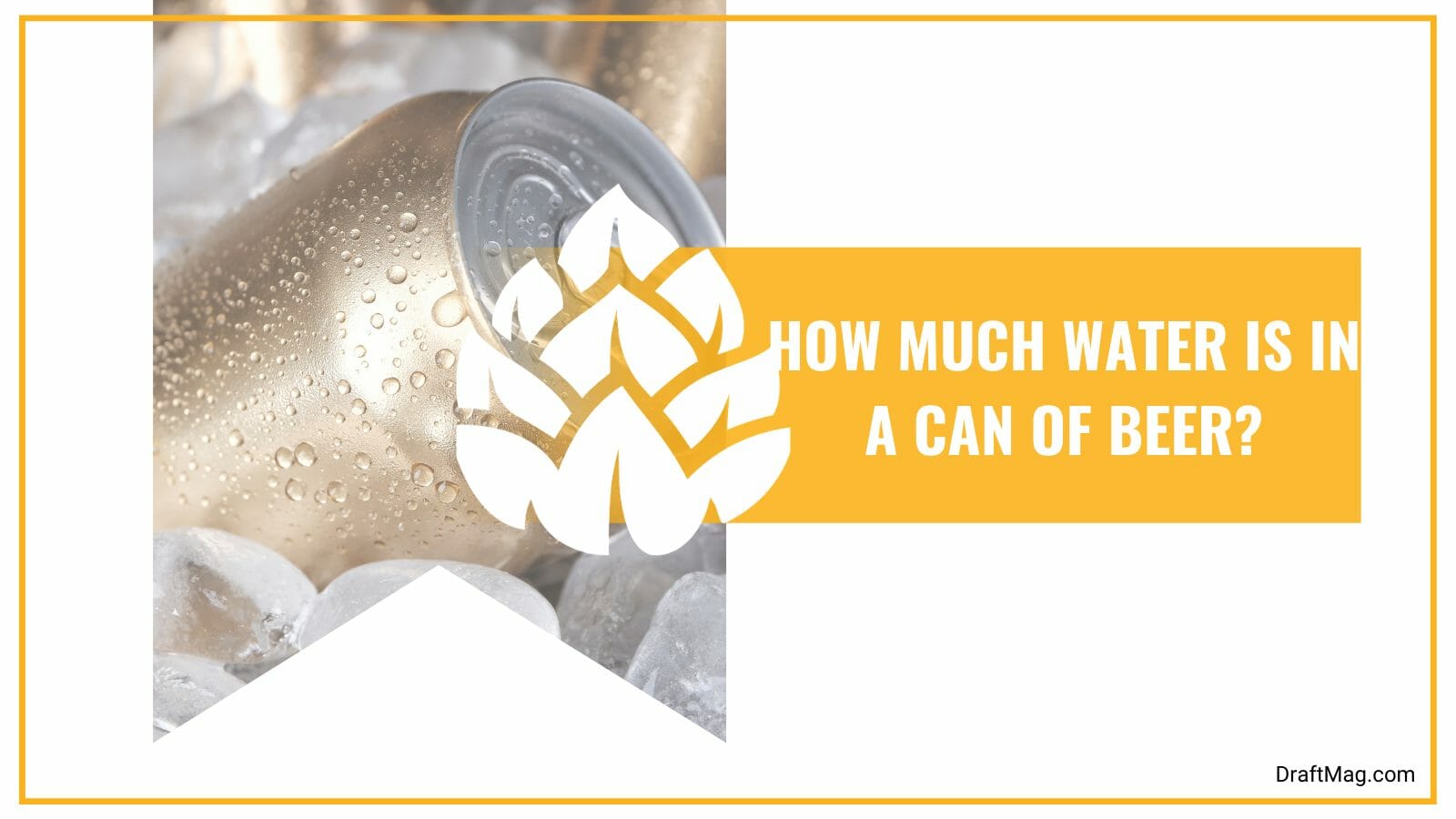 Suppose you reach for a cold one from the fridge, you might not be able to decipher the water content in one attempt. Besides, many beer fanatics don’t pay attention to how much of their beer is water. Beer cans are available in various sizes, including 12-ounce, 14-ounce, 16-ounce and 20-ounce cans. The most popular beer can sizes are the 12-ounce and 16-ounce can sizes.

Likewise, beer makers sell commercial beers in 12-ounce sizes, while other craft beers are offered in 16-ounce sizes due to their ease of design and transport. That way, you will agree that the amount of water in a can of beer depends on the serving size you pick. 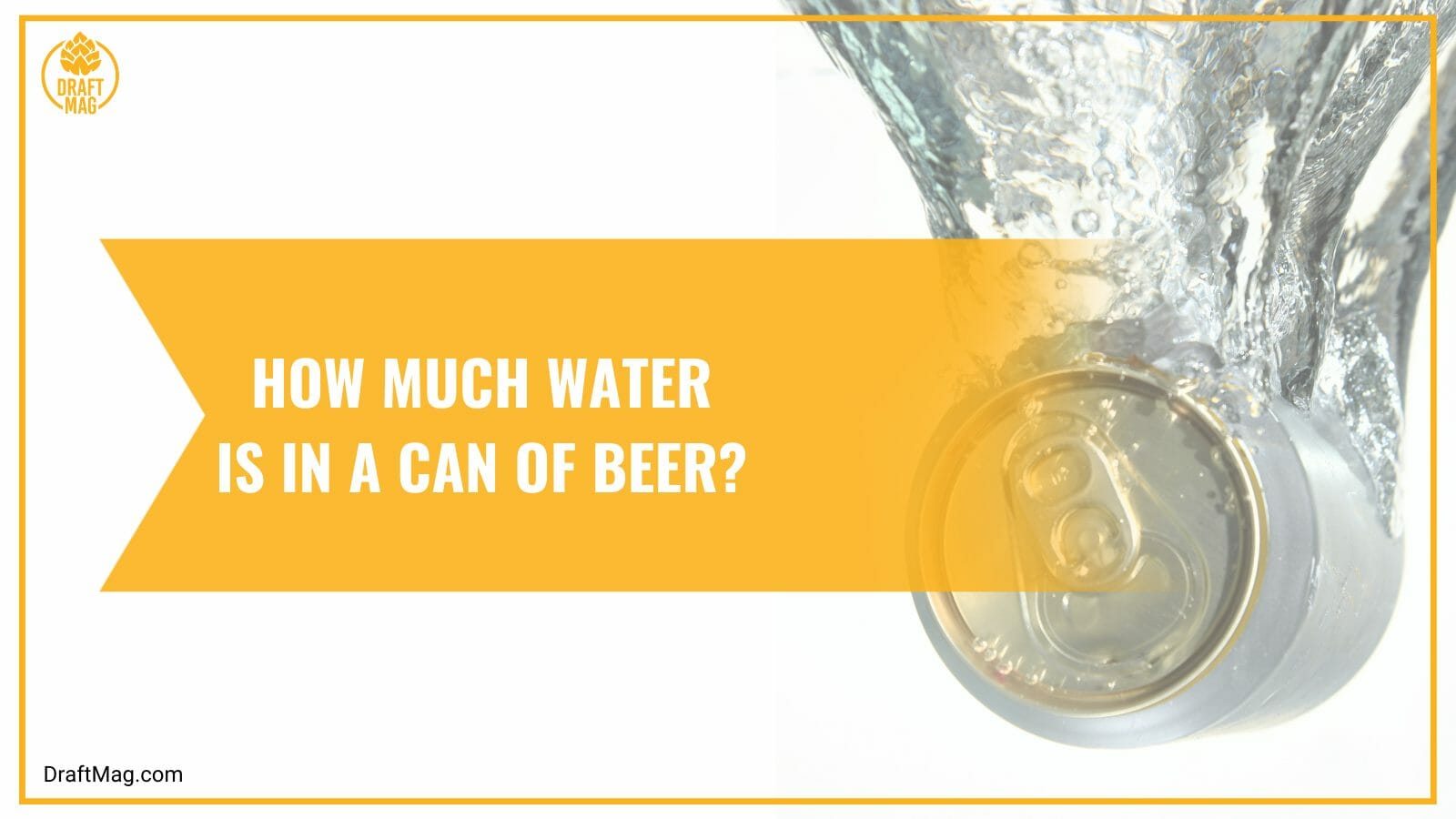 The alcohol content of beer varies from as low as 2 percent to as high as 8 percent. Therefore, while adhering to the standard alcohol content of 5 percent for typical commercial beers, let’s determine how much water is present in each can.

It is somewhat puzzling how most individuals disregard water as a vital beer ingredient, possibly due to its ubiquity. You’ll discover that beer drinkers take less time to identify the hop, malt and yeast varietals blended into various beers as they sip, not knowing that the largest part of what they’re consuming is water.

Not to mention, filtered water remains vital in beer brewing as it combines with other ingredients to give a perfect fluid balance that satisfies most drinkers. This leads us to the million-dollar question — How much water is in a 12 oz beer?

The standard 12-ounce beer contains as much as 90 to 95 percent water, depending on its style. By style, we mean the production method, keeping in mind that not all brewing processes are uniform. Furthermore, these brewing variations mainly come down to the sugar used and the type of yeast added to ferment it, so most beers’ water content differs slightly based on the alcohol percentage and presence of other ingredients.

For instance, the 12-ounce can of the delicious Captain’s Daughter beer has 8.5 percent ABV, while the light-bodied Schaefer Light beer has 4.4 percent ABV. After some math, you can deduce both beers’ water percentages and their equivalent in ounces.

Check the simple calculation for the 12-ounce beers below:

A 4.4 percent ABV indicates that this beer contains approximately 0.53 ounces of alcohol. Therefore, the beer contains 95.6 percent water, equating to a staggering 11.5 ounces.

How Much Water Is Used to Make 1 Litre of Beer? 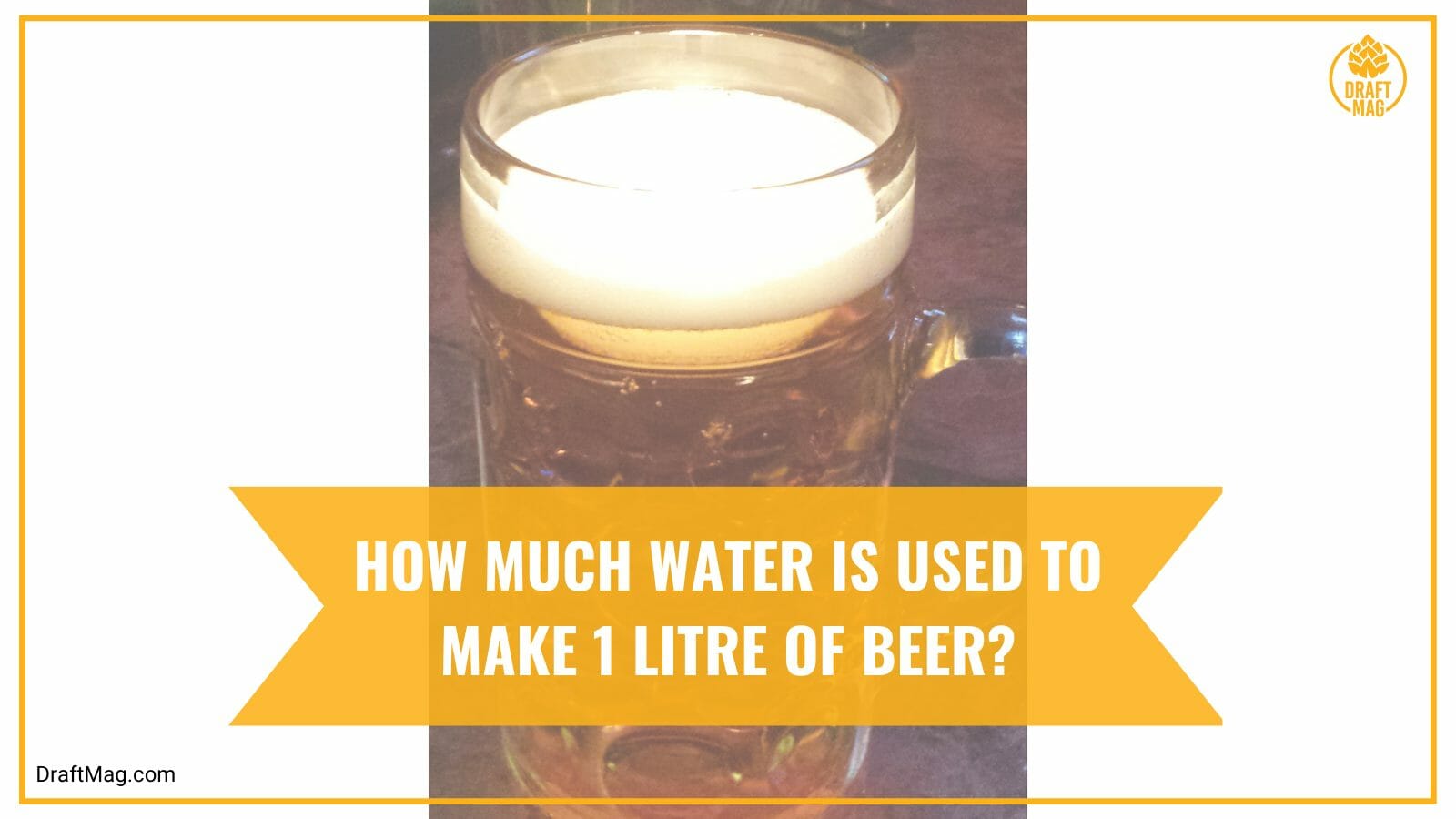 Additionally, the quality of water used for brewing beers or liquors impacts the final product in various ways. Check them out below:

Therefore, several breweries rely on filtered water or adopt a water purification system. This approach helps ensure that the water used for all brewing processes has all the needed qualities to produce quintessential products.

What Is the Importance of Water in Brewing?

Water is a vital element used in virtually every stage of the brewing process because it makes up a huge portion of the resulting beer product itself. Beer makers use more water to brew beers than you think, and we cannot overemphasize its significance.

Water plays a role in beer and liquor making, cooling, packaging and cleaning various equipment. Moreover, expert brewers profess that cleaning is more water-intensive as producing a gallon of beer requires about three to five gallons of water for cleaning.

Some less efficient breweries consume more water. Unfortunately, the breweries in drought-struck areas put up with the tension between water supply and demand. For this reason, most breweries develop ways to utilize available water for sustainable brewing. This includes reducing the quantity of water sent down the drain or lost to evaporation.

– What Type of Water Is Best for Making Beer?

Filtered water remains the best choice for making beers. It is devoid of contaminants while containing enough magnesium and calcium ions for a healthy fermentation. 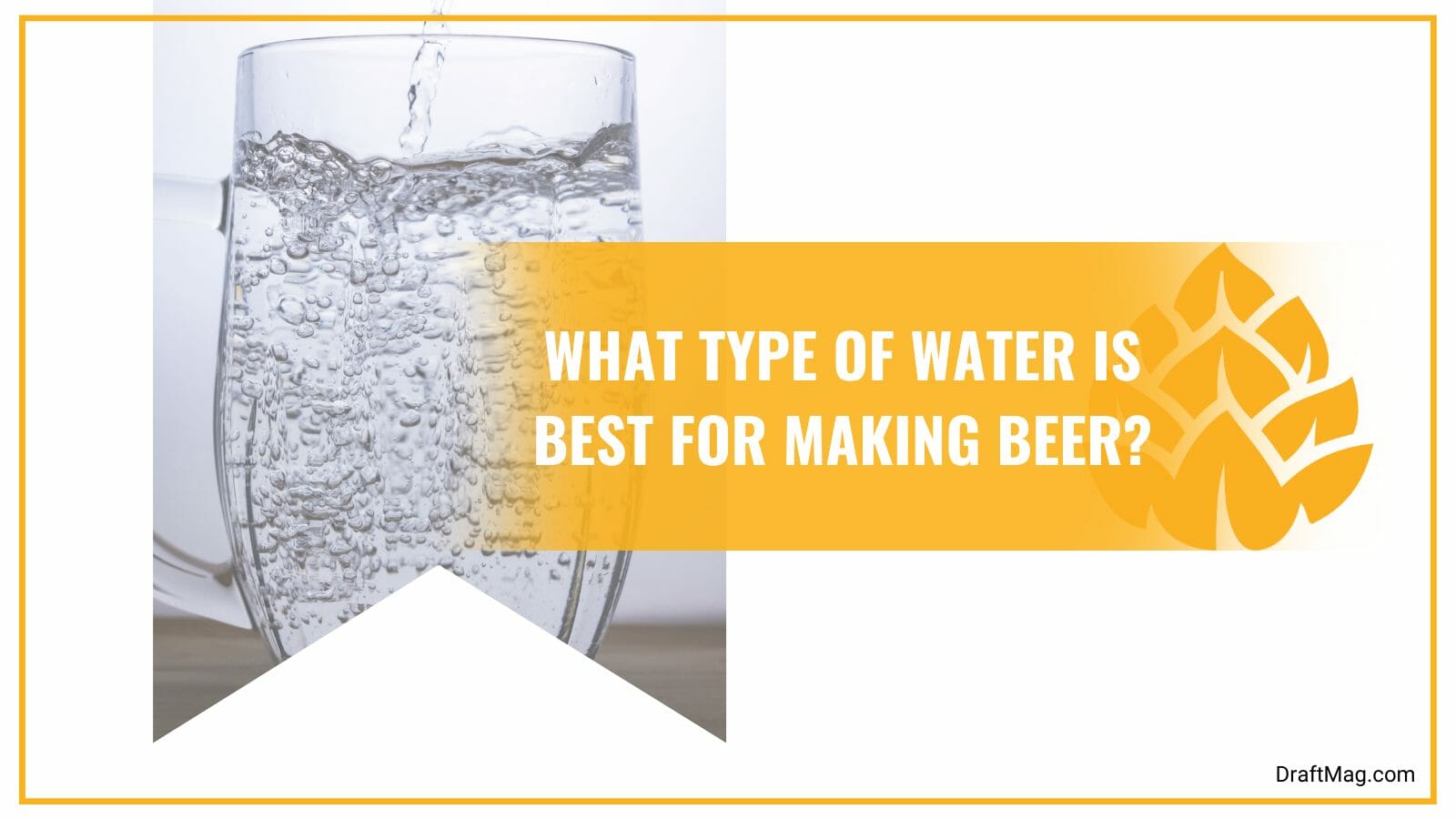 As a result, filtered water has a good balance between purity and the needed mineral adjuncts, making it an excellent base for most beer styles.

How Much Water Is in Other Alcoholic Beverages?

The water content of different alcoholic beverages would depend on what type of drink it is; for example, wine contains 80 to 85 percent water while liquor has 40 to 60 percent water.

Here are some of our favorite alcoholic drinks and how much water is really in them.

– How Much Water Is in Wine?

Wine contains 80 to 85 percent water, which applies to the most common types of wine, including Red, White, Sparkling, Rose and Dessert wine. Since the alcohol content in most wine varies from 12 to 15, then on average, that leaves approximately 87 percent for everything else.

It is no longer news that wine also contains water. Moreover, expert brewers in wineries attest that it takes about 872 gallons of water to make a gallon of wine. Scaled down, you’ll need about 34 gallons of water to produce five fluid ounces of wine.

Some wine components such as tannins, fruit, sugars, acids, flavors and other compounds constitute about 2 percent. Thus, in general, your average wine is comprised of 85 percent water.

– How Much Water Is in Liquor?

Liquor, also fondly called hard liquor, is an all-encompassing designation for drinks with high alcohol content. Generally, liquor undergoes distillation to make a potent drink, unlike other brews such as beer and wine that undergo fermentation. Six widely accepted types of liquor exist, though a few other drinks fall into this group. They include vodka, whiskey, rum, gin, tequila and brandy.

Some liquors are so potent that one might mistake them for ethanol, while others have higher sugar content than ethanol, making them more tasty and drinkable. Regardless, water remains an essential ingredient and component of any liquor.

– How Much Water Is in Vodka?

A standard vodka contains between 45 to 50 percent water, as vodka is distilled liquor that is comprised of mainly alcohol and water, with an alcohol content ranging from about 45 to 50 percent.

In the meantime, you shouldn’t find it hard to see this information on any vodka brand you come across. Besides, most liquor manufacturers design their bottles with an information box that shows the ABV statement. 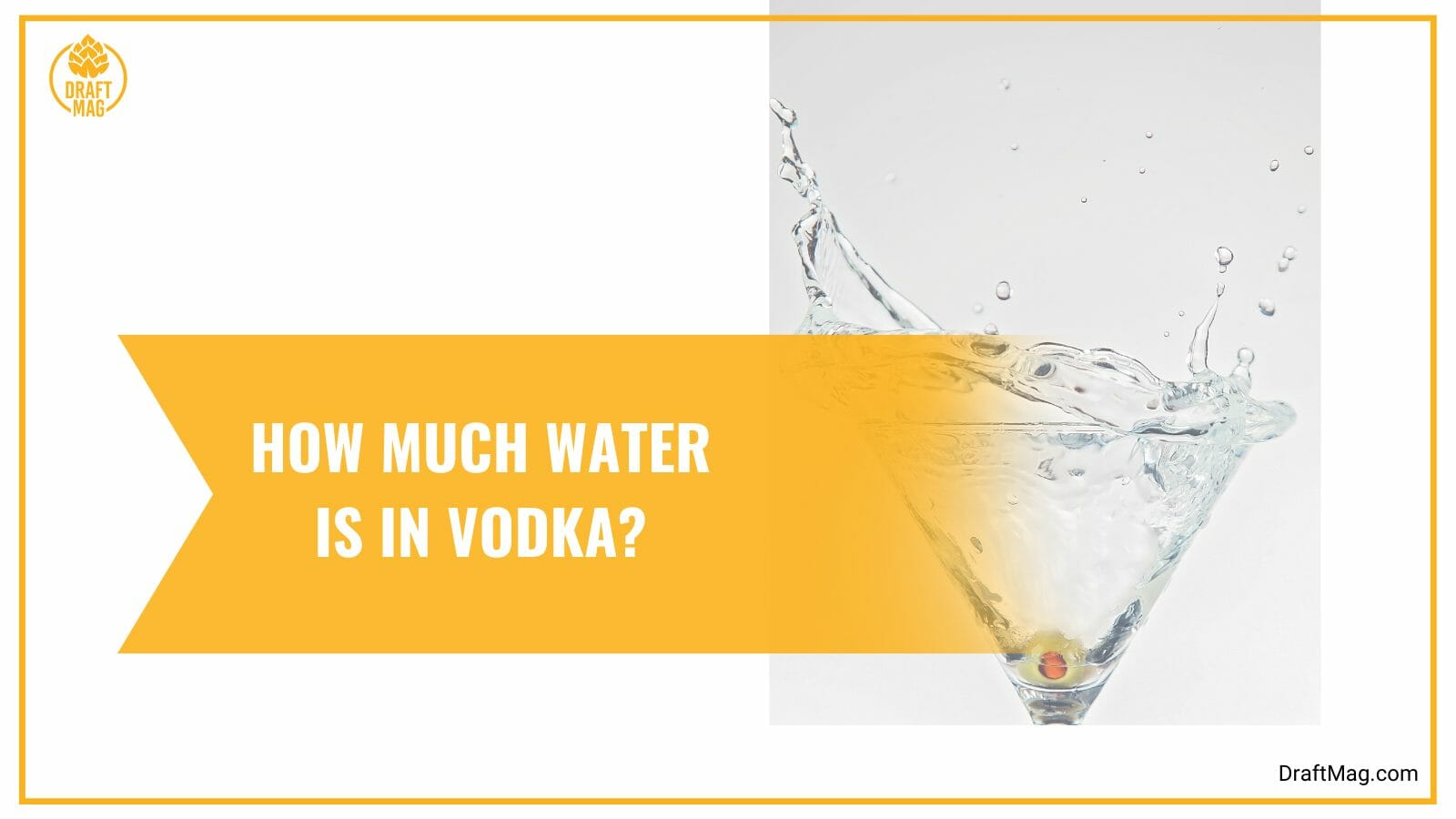 Typically, vodka contains an excess of 95 percent ABV when it is obtained from the still during the early production stage. The alcohol concentration of the vodka spirit at this stage is high enough to shut down the liver like a switch if drunk. Hence, the distiller adds sufficient water to reduce the alcohol content to a bottling strength of 40 to 50 percent. This added water helps provide more subtle drinking neatness.

Gin is also produced from vodka spirit. However, gin production involves predistillation with botanicals to slightly reduce the ABV before passing it to the distiller to add water. Depending on your taste, you can accurately dilute your vodka with water. The added water will help release the laid-back aroma and flavors as the ethanol reacts with water while leaving some of the spirit impression.

– How Much Water Is in Whiskey?

The water content of a standard whiskey bottle stands between 55 to 60 percent, considering the other ingredients blended to provide its unique tasting notes. Whiskey is a distilled alcoholic beverage produced from three main ingredients — water, fermented grain and yeast.

The whiskey distillate from the still at first usually contains about 20 percent water, sometimes up to 30 percent depending on the distiller. Some other ingredients like sugars, lactones, phenols, esters and acetaldehyde provide the signature whisky flavor through the water content, not the alcohol. Afterward, the brewers add more water before bottling to fine-tune the whiskey to the preferred drinking taste. To put it simply, “whiskey” without water is “vodka.”

Adding extra water to whiskey or other alcoholic beverages is entirely up to you. Most drinkers supplement their whiskey with water, especially ice cubes, to diminish the alcohol bloom so they can savor the hidden flavors. But once you’ve settled on a whiskey offering that pleases your palate, you can water down your whiskey without losing the structure of the spirit.

– Does Beer Count as Water Intake?

No; in a nutshell, drinking beer does not count as water intake. Even though some argue that beer contains over 90 percent water, keep in mind that beer does not hydrate. To bolster this from a medical view, the alcohol in beers acts as a diuretic which causes frequent urination, so even if you empty a couple of beer bottles, it can never replace water.

– What is the Standard Drinking Range for Beers?

These numbers come from the National Institute on Alcohol Abuse and Alcoholism, who specified the moderate drinking range for men and women to prevent alcoholism and alcohol-related health problems.

Without water, there’s no beer! So whenever you grab a bottle, you should always appreciate the vital role of water in brewing.