If you’ve ever asked yourself “What is a beer stein, how is it different from beer mugs, and how did it come into being?” then you’ll find all the answers here. German beer steins are of German origin and are made of different kinds of stones, porcelain, silver, pewter, crystal glass, or even wood. 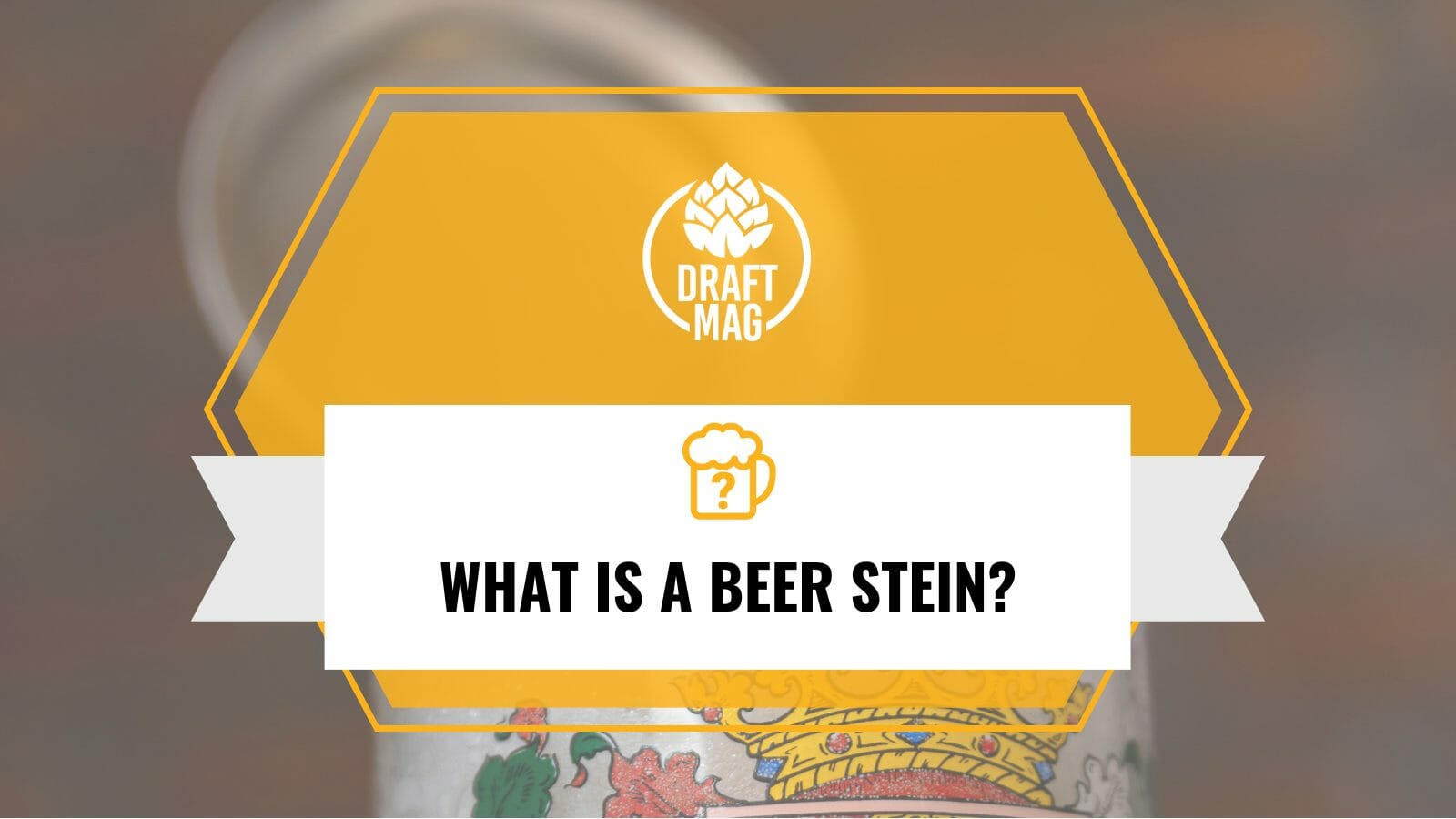 They are ornamental mugs that are collectibles and personalized for people to share as souvenirs. If you want to know some more of the quirky features of steins and what they represent, then continue reading this detailed guide!

What Is a Beer Stein?

Authentic German steins are ornamental mugs that were originally made during the Bubonic plague and can come in multiple sizes from 300 ml to 3 liters. They are mostly decorated in traditional German carvings and symbolism, which portray different historic/symbolic things from around Germany.

These mugs were made to avoid the widespread effects of the plague from using public glasses. Germany and its people have a long history of brewing and indulging in many kinds of beers. This eventually led to the creation of personalized beer steins. Owning your own beer stein and drinking out of them almost became a status symbol.

Each of the royal houses or the influential families of Germany had their own carvings on these craft beer mugs, and they came with their unique lids. Most of the historic beer steins were always carved by hand and hand painted according to the owner’s desires.

Each symbol carved on the stein’s body stood as a representation of the family or its people. These traditional German beer steins are works of art, and they became objects of collection for many people worldwide. But finding an authentic beer stein that is beautiful and valuable at the same time can be challenging.

What Are the Different Types of Steins?

Many different kinds of steins came into being during the 14th century, such as carved, ivory, and glassblown steins, among others.

They told stories from the Bible, war, famous battles, historical events, etc. Among them, the most popular types of steins are listed below.

These have detailed carvings, mostly representing the local folk tales or stories about German wars, battles, and heroism. These steins are sometimes even costlier than metal or glass beer steins. The value of these steins depends on the detailing in the carvings.

These are some of the most beautiful steins. They have many symbols, heroes, or animals carved on milk-white ivory. This exquisite white color is very rare for a beer glass. Hence, this has become a rare collectible for many. 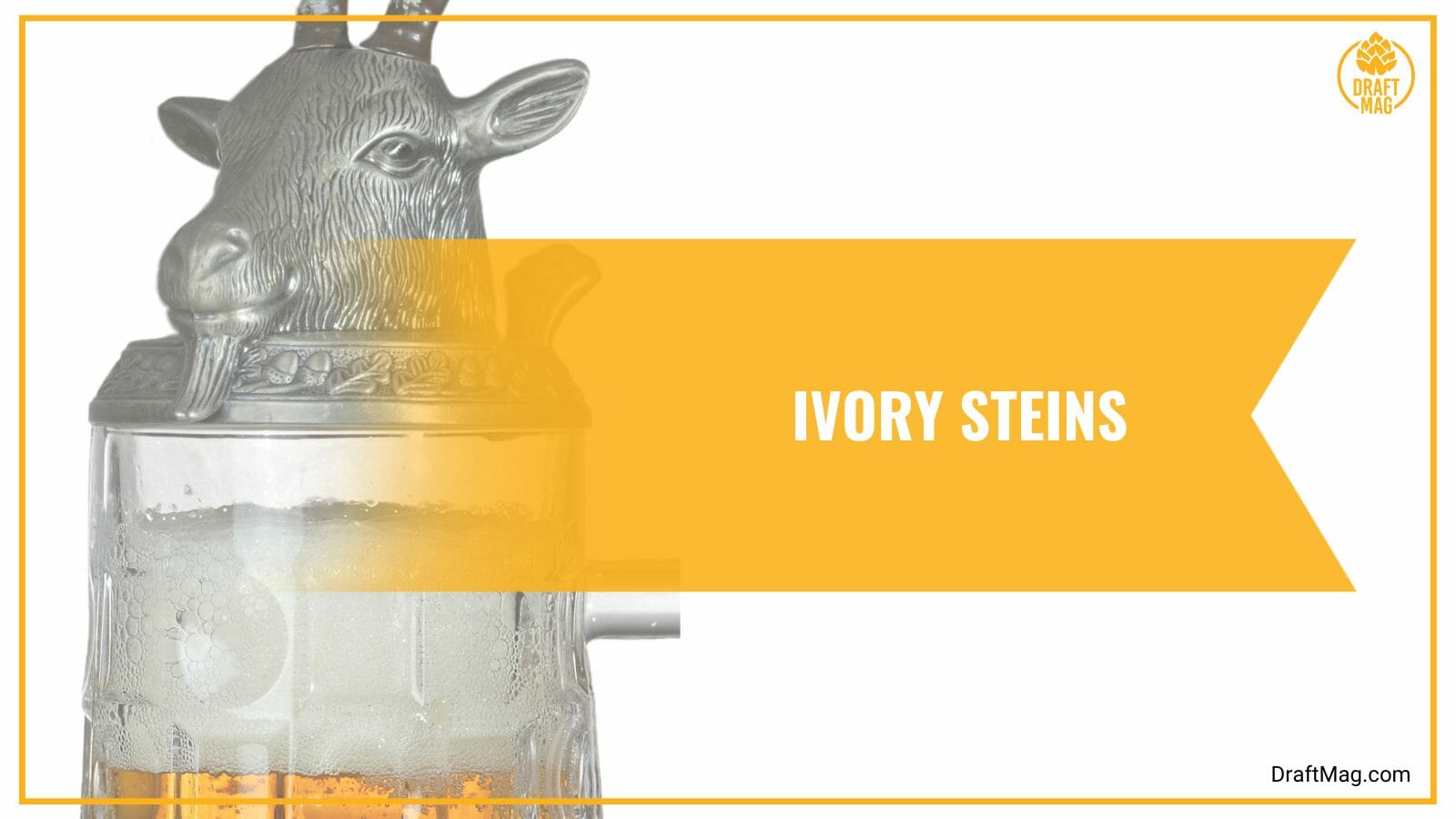 But there is a high chance of the ivory being illegally sourced, so if you are planning to collect one of these, be sure it does not violate any animal rights.

These are among the oldest yet simplest steins to be found to date. They come in diverse, colorful shades like green, cobalt, blue, red, or brown. The colors are dependent on the type of salt used to dye the liquid glass during the glass-blowing process.

Though glass-blown objects were quite prevalent during the olden days, they are rare at present, making them collectible items.

These were once gifted to German heroes who had finished fighting in battles and had successfully defended their nation. The names, ranks, and statuses of the soldier were mentioned. 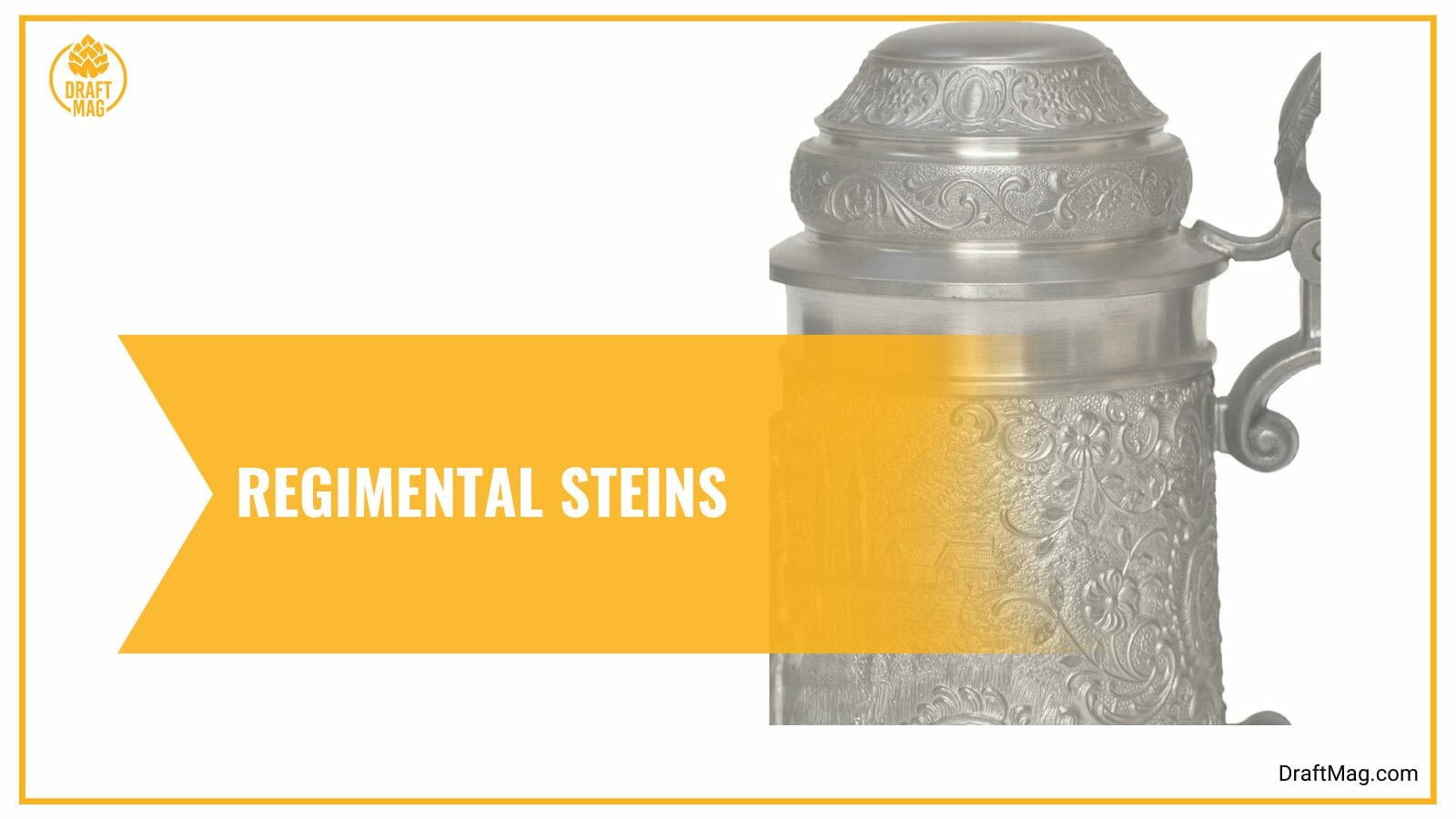 They almost worked as war medals for the soldiers and talked of their bravery.

These steins were produced by the famous Villeroy and Boch Co, which were Mettlach stein makers between 1880 to 1910. Each stein has an exclusive design, and its trademark is easily identifiable, making them quite valuable.

What Are German Beer Steins Made Of?

Traditional German steins or beer glasses can be made of many different materials like stoneware, silver, pewter, glass, porcelain, wood, or even crystal. The most common and expensive ones were made with silver and pewter (tin).

Carvings on these metals were easier, and these metals had more value, adding to the status symbol of the mug owners.

At present, beer steins available in the market are mostly made out of glass or cheap clay. But many collectors still have numerous old authentic ones. However, they can be very expensive due to their long history and are too fragile to use. Buying them as a collectible is still an option.

How To Identify an Authentic German Beer Stein?

If you want to find authentic German steins produced in ancient times, then there are some identifying factors you can look for. Check them out below. 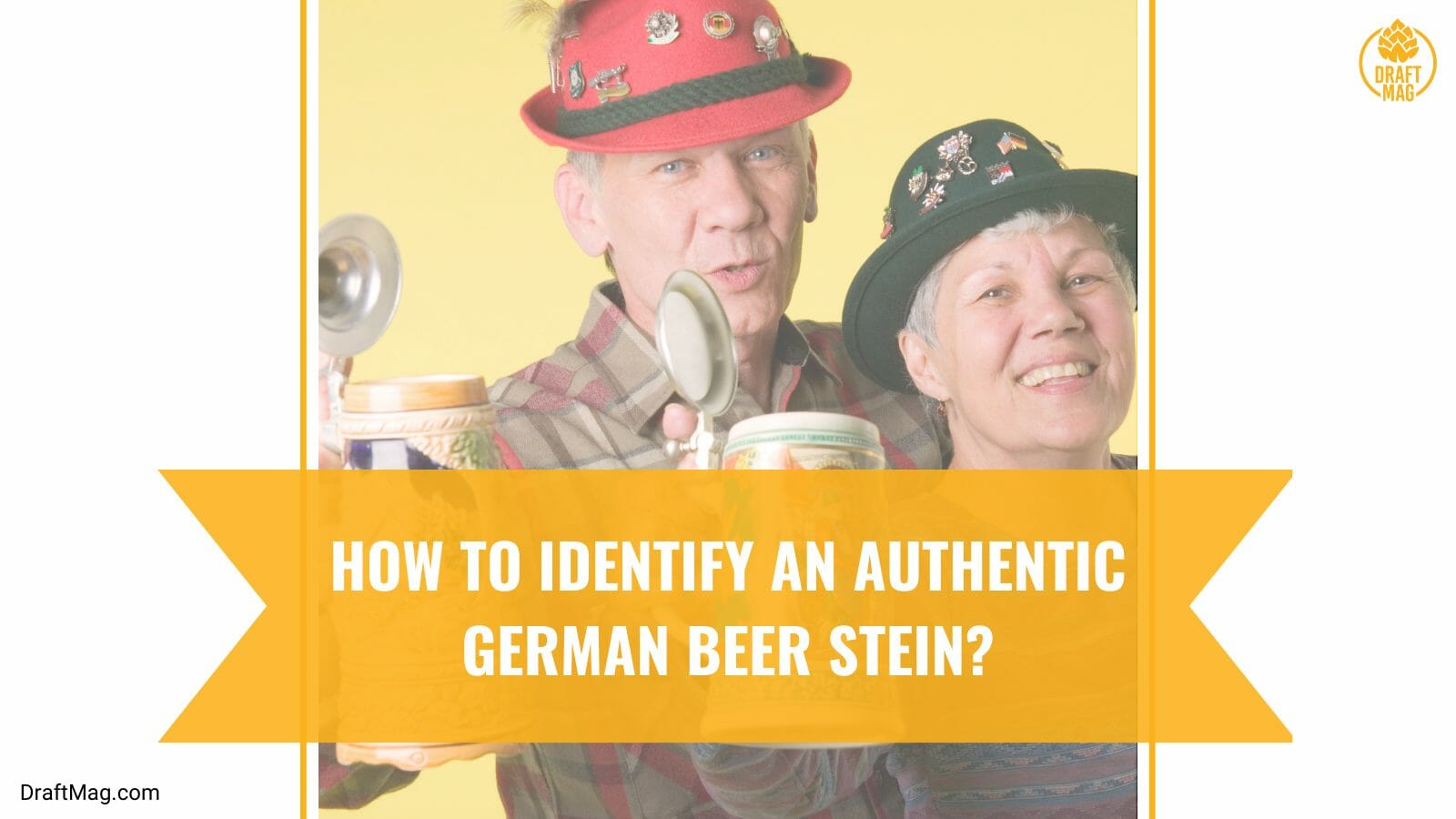 What Is the History of German Beer Steins?

German steins are each handcrafted and individualized, and most of their production started during the 14th century. It is believed that the tradition of stein-making started from the idea that if they are handcrafted, people can’t mass produce or duplicate them, which is why each beer stein is unique. 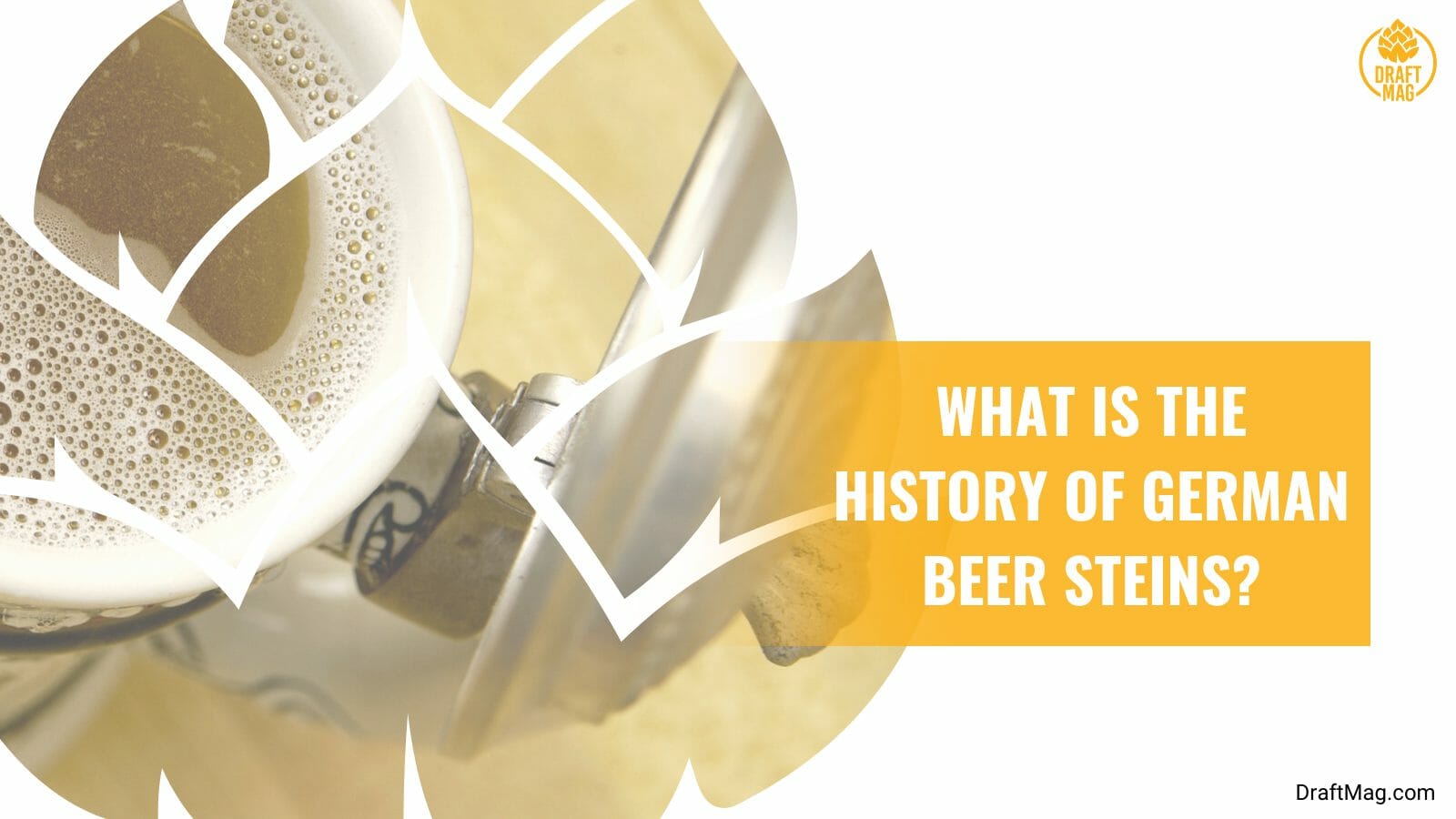 The word “stein” in German means stone, but that does not mean that all German steins are made of stone alone, as they can be made from a host of different materials.

In many popular beliefs, it is also said that the German stein was popularized during the Bubonic plague. Why? The use of public beer glasses could spread the disease and affect many people. By the 14th century, the plague had nearly killed more than 25 million Europeans. That is how the personalized use of beer glasses or handcrafted steins began.

How the German Beer Stein Changed Over Time

Before the invention of the stein, the upper-class Germans drank from beakers made of glass, silver, or pewter, and the poor drank from stone or wood glasses. After the plague, this new craft of stein-making changed these systems. But even if steins were being produced for everybody in Germany, the most well-crafted and authentic ones were still owned by the most wealthy Germans.

The best diversity in these steins came from the decorations on the body and lids that directly reflected German art forms and artists’ vision. But with modernization, the use of beer steins reduced and people shifted to cheaper and readily available beer mugs.

At present, there are a lot of companies that handcraft many beautiful steins. There are also some small stein producers in Europe. Most people now buy them as souvenirs and as personalized gifts for others.

What Are the Symbols Used in German Beer Steins?

There is a lot of symbolism and markings on authentic beer steins, and the most commonly used symbols are of animals. They are sometimes used as background objects or even as primary figures in designing the steins. 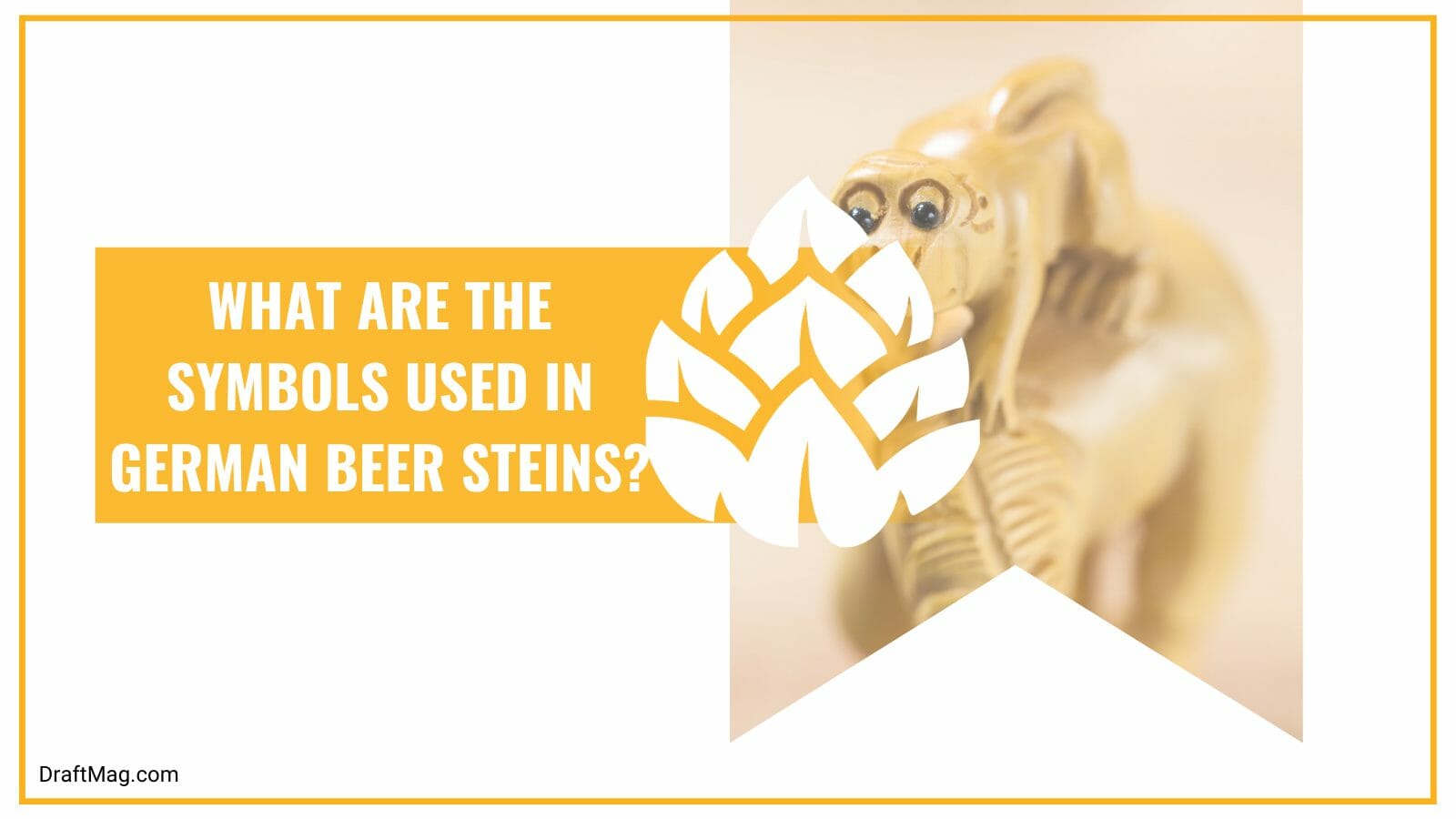 Here are some popular symbols used and what they used to represent.

Why Do German Beer Steins Have Lids?

A compulsory law was passed in many German cities to ensure that all food and liquids were covered at all times to stop the spread of the Bubonic plague, which led to the creation of unique lids for each stein. Adding these lids to the stein glasses helped keep the disease-ridden flies away from the beer.

Once the steins were popularized, then came the lids, but as an added advantage, the lids of the beer steins also help maintain the cool temperature of the beer and retain its freshness for a longer period of time. This was not its primary objective, as is mentioned by many beer advocates, but this came as an extra advantage.

Each of the lids of the German stein had its own individual tales like the stein itself. The lids can be categorized into the following popular categories: 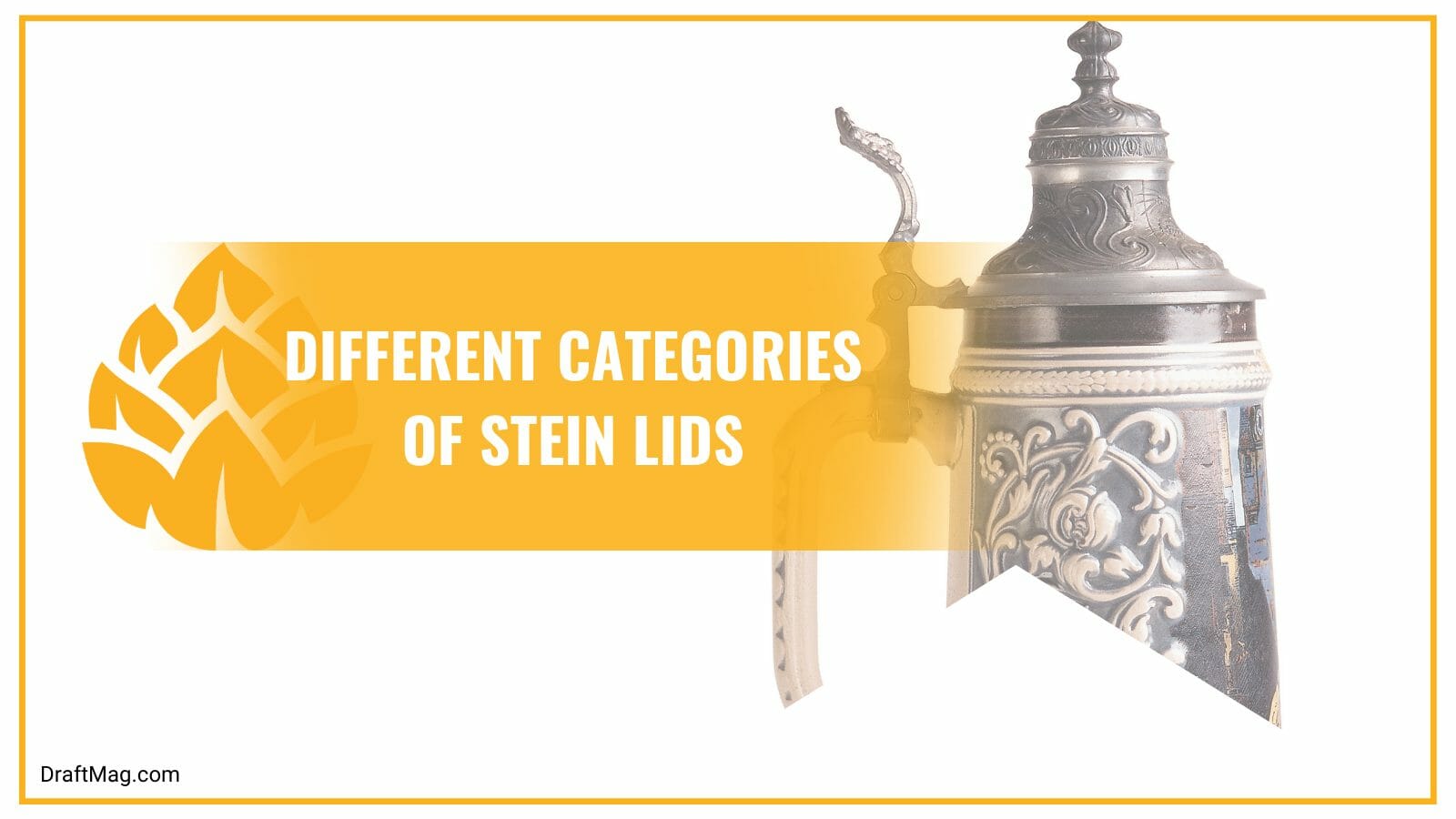 German beer steins are one of the oldest known ancestors of beer glasses, and to date, many people collect and store these as pieces of art. If you are planning on getting your hands on one of these authentic German beer steins, here is everything you need to remember.

Before you get your hands on a German stein, it is best to get them checked with an authenticator to see if it’s an original or a fake. There are many cheap copies in the market, so it’s important to recheck before buying.