If you’ve ever asked yourself “How tall is a beer bottle?” then you should know that there are varying lengths of beer bottles depending on the brewery and its target audience. A brewery that wants to target light drinkers will prefer the nip, a small-sized beer bottle, while heavy drinkers may opt for growlers. 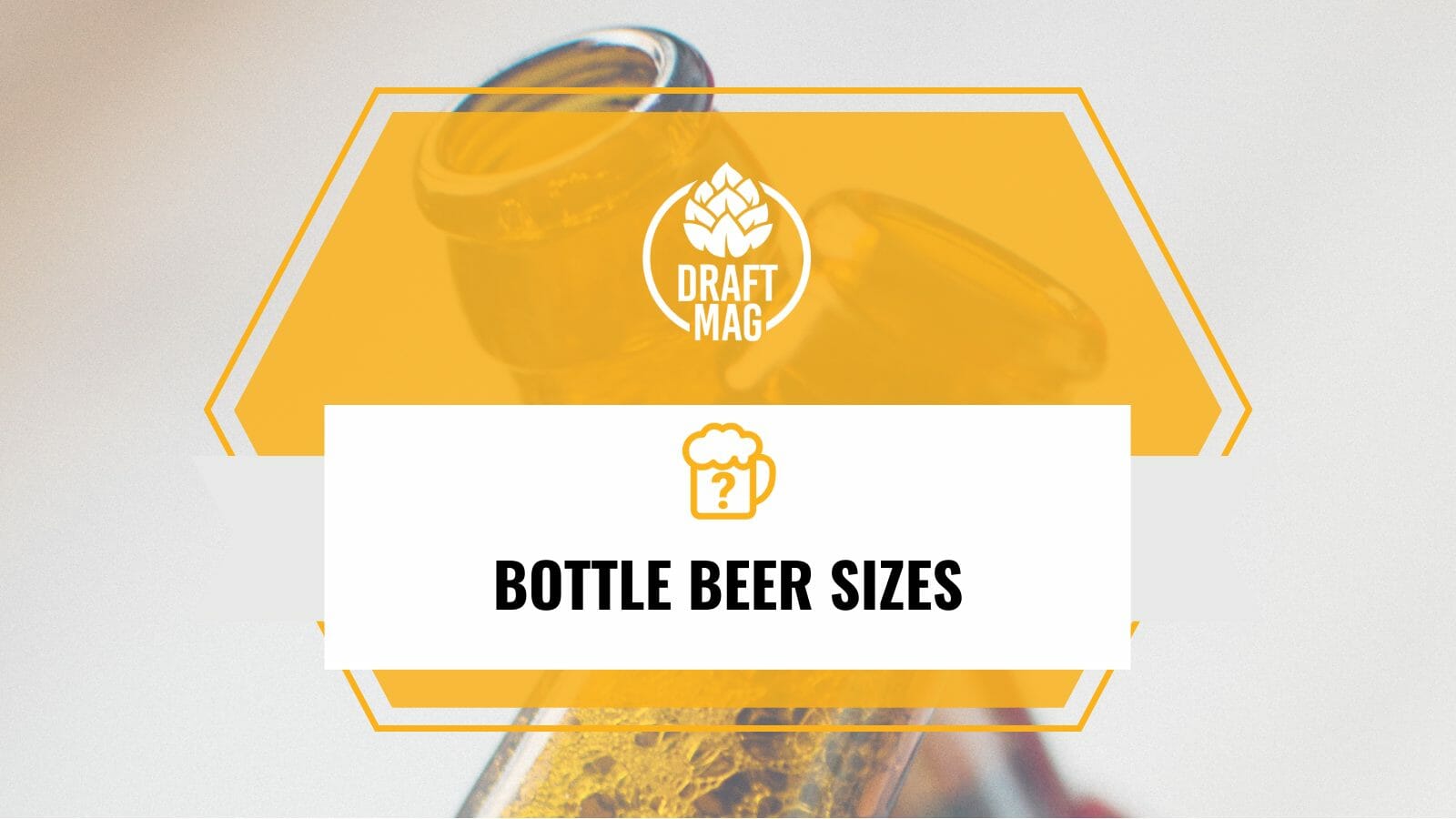 In this extensive guide, we will look at the lengths and widths of the famous beer bottles on the market and the volume that each beer bottle can contain.

How Tall Is a Beer Bottle?

The average height of a beer bottle is 9.09 inches, but there is the nip bottle, which comes with a height of 5.89 inches, and the growler, which is around 11 inches. Here is a list of the popular styles and their respective heights:

The nip bottle, sometimes referred to as pony, is a short glass bottle popular for holding strong beers during the 90s. As stated, it is about 3.79 inches in height and has a 7 oz volume, which holds about 350 ml of beer. The nip bottle was designed for strong beers that should be consumed in small amounts to prevent inebriation. Also known as grenade bottles, the nip was popularized by beers such as Coronita, Miller Lite, and Roger and Out. 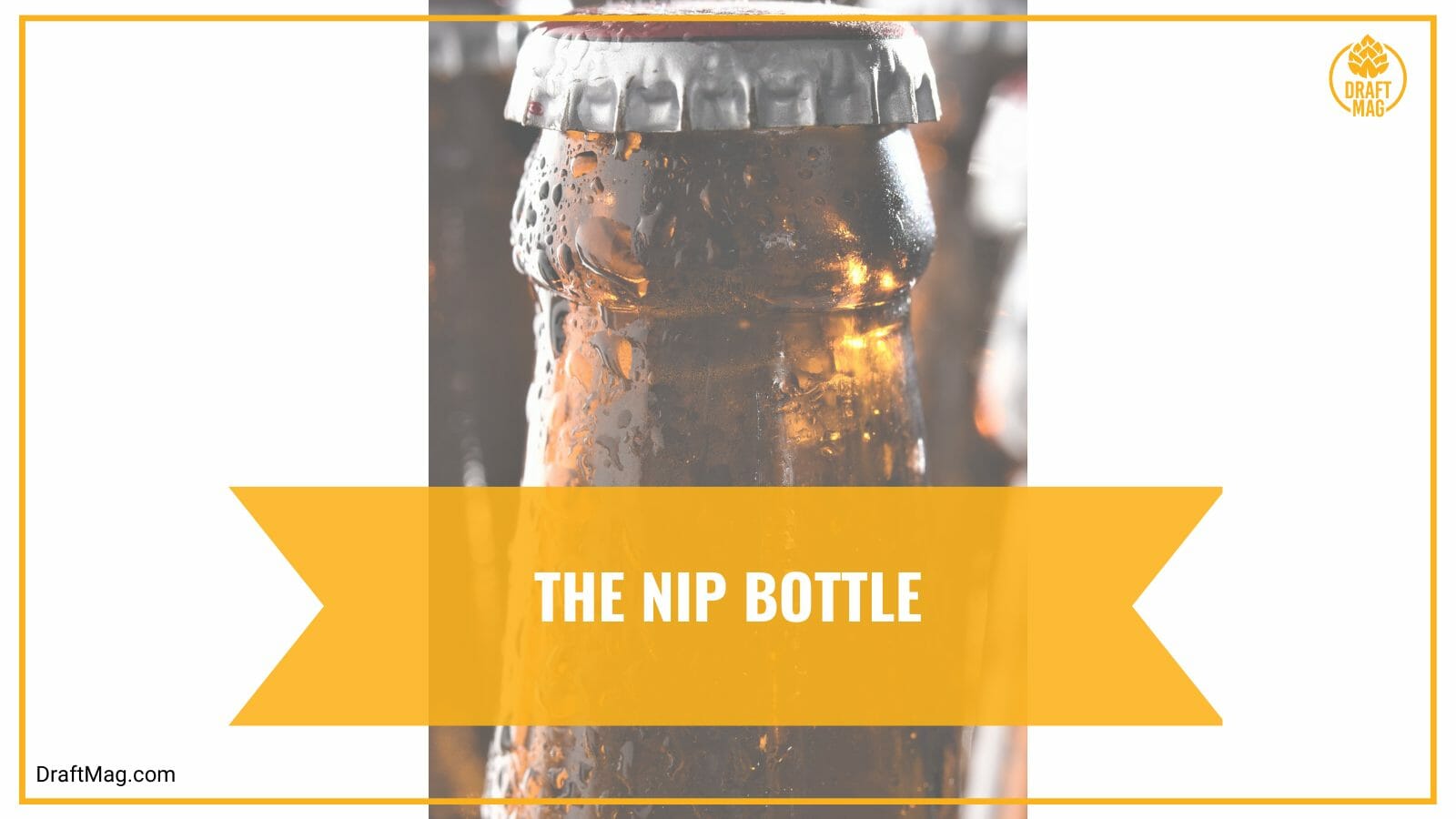 The nip was the number one choice for travelers due to its size, however, its high alcoholic content became a cause of concern. Also as we discovered earlier, the nip bottles were designed for strong beers that should be consumed in small amounts but they became the subject of abuse.

Many organizations started campaigning against its use, and before long, breweries started phasing them out. Today, nips are not as well-known as they were in the 90s, but you can find a few breweries that still use them with a reduced ABV.

Next is the 11 oz Stubby, which has a height of 6.2 inches and a 2.65-inch diameter. Also known as Steinie, it has a shorter neck and a flatter width when compared to the standard bottles. The stubby’s stature means it can hold about 235 ml of beer and makes transportation easier.

First pioneered in the 1930s, the Stubby is made of thick glass and it comes in a 24-bottle pack. The Stubby lost its appeal as more breweries preferred the standard ones with bottle caps for diverse reasons, but the post-2010s saw a revival in their interest.

In 2013, the Coors Brewing Company launched the Coors Banquet, which came in Stubbie bottles. This was followed by Miller Lite when the company revived its 1975 stubbies. Following suit was Budweiser who, in 2017, renewed their interest in the Steinie with their limited edition 1933 Repeal Reserve.

The heritage bottle has a stout profile, is slightly shorter, and has more width when compared to the standard beer bottle. It is 7.6 inches tall with a weight of 6.4 oz and is 2.6 inches in diameter. The heritage can hold 355 ml of beer and comes in an amber color, which helps to protect the brew from UV rays. The bottles have a pry-off finish, which is favored by the microbrewing community. 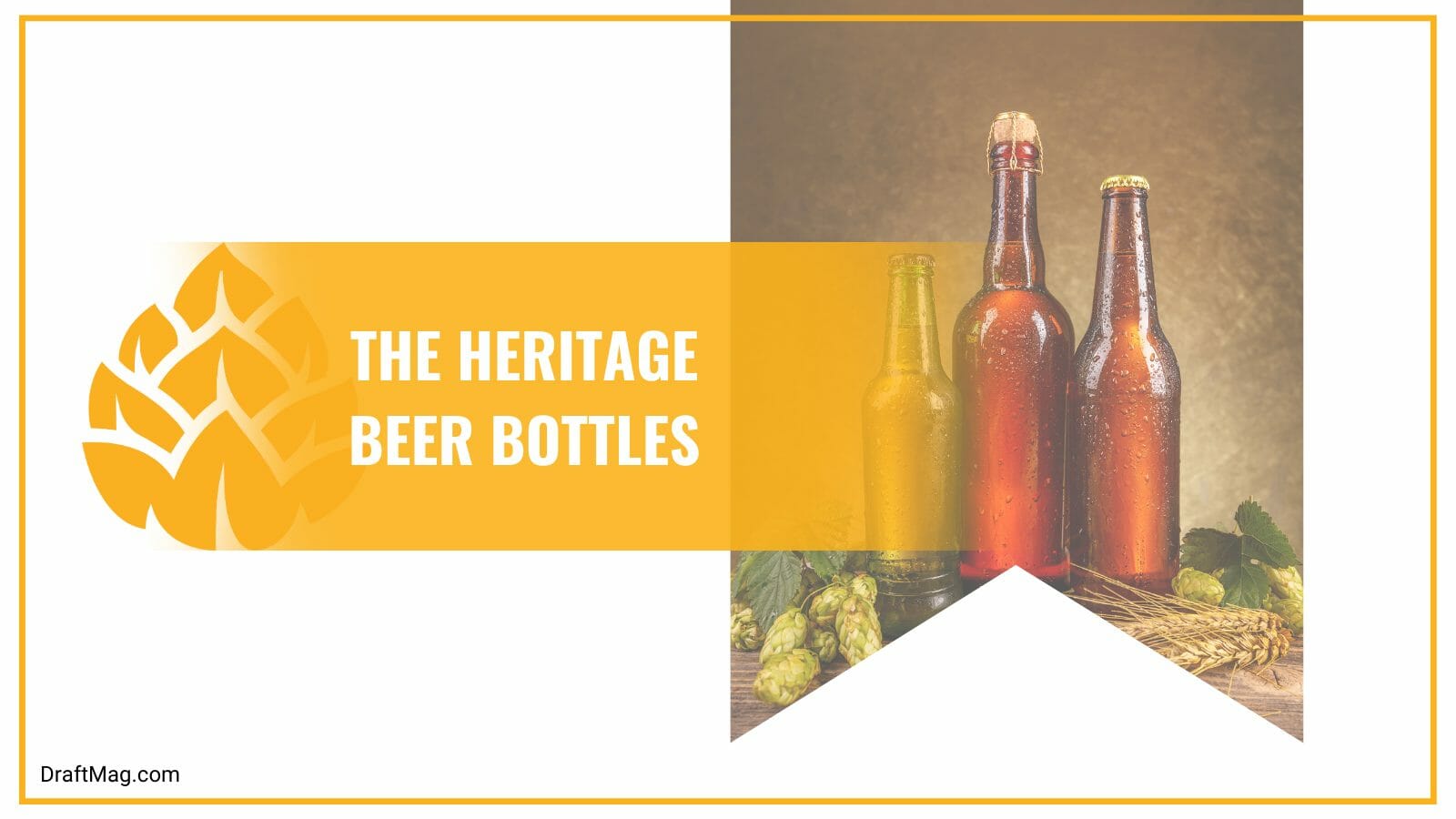 The beer boasts a 12.0 oz capacity with a 1.0-inch neck width, thus it is much more portable than the standard 12 oz long neck.

This is a 375 ml bottle nicknamed the bomber, which has a height of 8.6 inches and a diameter of  3.1 inches. The bottle features a bubbled neck and a cork finish, which is suitable for beers with higher carbonation. Belgian bottles are thicker and thus do not break when filled with hot beer. Breweries that are into lambic and gueuze-style beers prefer Belgian bottles.

There are different Belgian bottles with lengths as high as 11 inches, a 22.5 capacity, and can hold beers of up to 750 ml. However, they all have the same bubble-necked design and utilize the cork finish.

The Euro bottle is rounder than the ones we just encountered and it stands at 8.9 inches and weighs 345 g. It features a diameter of 2.8 inches and can accommodate 500 ml of beer. It has a 16.9 oz and an amber hue, which protects its contents from light, keeping its taste and freshness. It comes in a package of 12 bottles per case, has a cork finish, and is great for European craft beer styles. 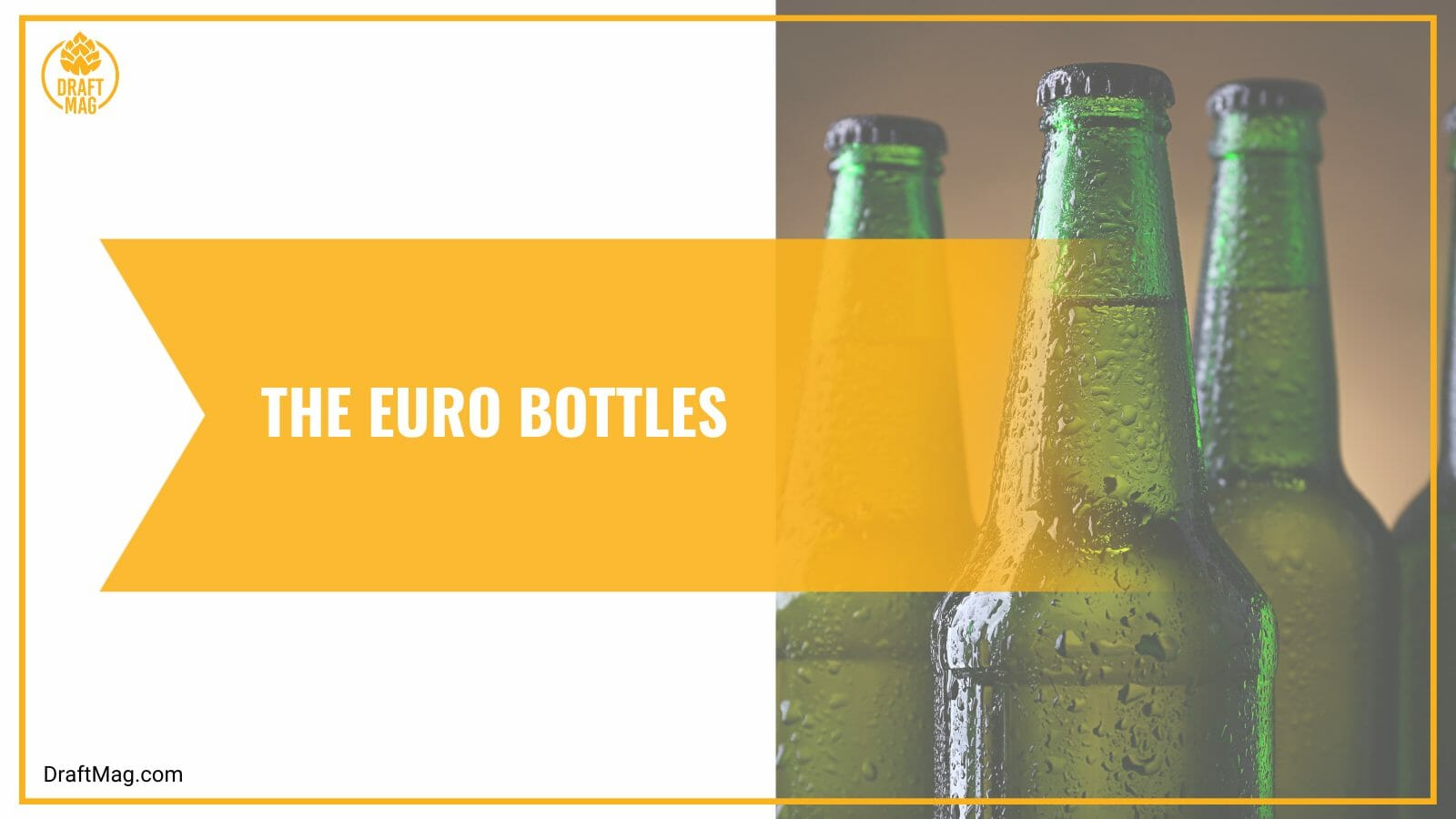 The Euro bottles were in vogue in the 1960s and 70s until the 1980s, where they lost their dominance in the beer market. However, it seems to be making a reappearance across Europe and soon will hit the breweries in the United States.

Both of these bottles have the same name but are easily distinguishable with the taller one having a rounder figure than the other. The tall one has a capacity of 16 oz that can hold about 475 ml of beer, while the shorter one features a 12 oz capacity and can accommodate beer of up to 355 ml (a Corona beer bottle size).

These green glass bottles have a height of 8.8 inches a diameter of 2.4 inches and a weight of 216 g. It shares an identical figure with the Euro bottles, but the Vichy’s neck is longer and its blonder is slender compared to Euro. 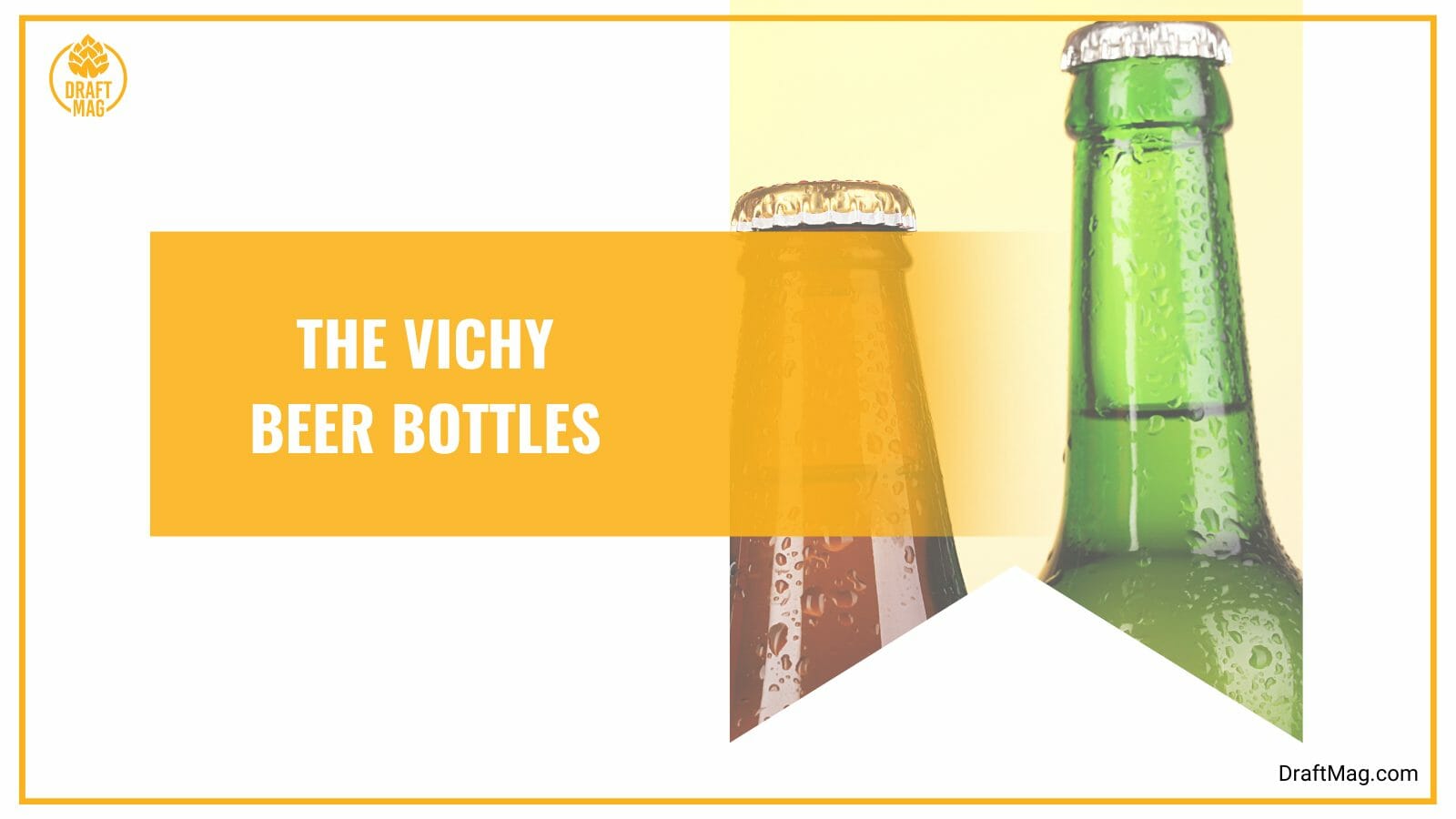 A taller version of the Vichy stands at 10.2 inches with a volume of 16.9 oz and a capacity of 500 ml. Both variants have a pry-off finish and are great for brewing personal beverages and packaging beers served at special events.

Then comes the 10.8-inch bomber bottles that have a 22 oz volume and a capacity of 651 ml. The bomber is similar to the standard long-neck bottles but is way taller and holds more beer. It has a 2.9-inch diameter and a 1-inch width with a weight of 333 g.

However, there is another version of the bomber which is longer and looks more like the Belgian. It has a volume of 25.3 oz and a beer capacity of a whopping 750 ml.

The “Belgian” bomber showcases a bubbled neck much like the “original” bomber and has a height of 11.4 inches. It is mainly used to store beers with high carbonation and its thick amber glass means it can keep beer fresh for days. Both versions of the bottle have a pry-off finish and are available in 10 and 15 packs, depending on the brewery.

The sparkling bottle ranks among the tallest bottles, standing at a height of 11.8 inches. It has a capacity of 750 ml, just like the “Belgian” bomber. There is a shorter sparkling bottle that is 10.2 inches tall and boasts a 500 ml capacity.

Both bottles are distinguished by their slender shape, which has the semblance of a champagne bottle. The sparkling bottles are great for lambic-style beers and beers that have high carbonation.

The growler comes with a height of 11 inches, though some can go as high as 12 inches. It holds the largest capacity of 2273.1 ml in a volume of 64 oz. The growler has a width of 5 inches or 6 inches depending on its height. 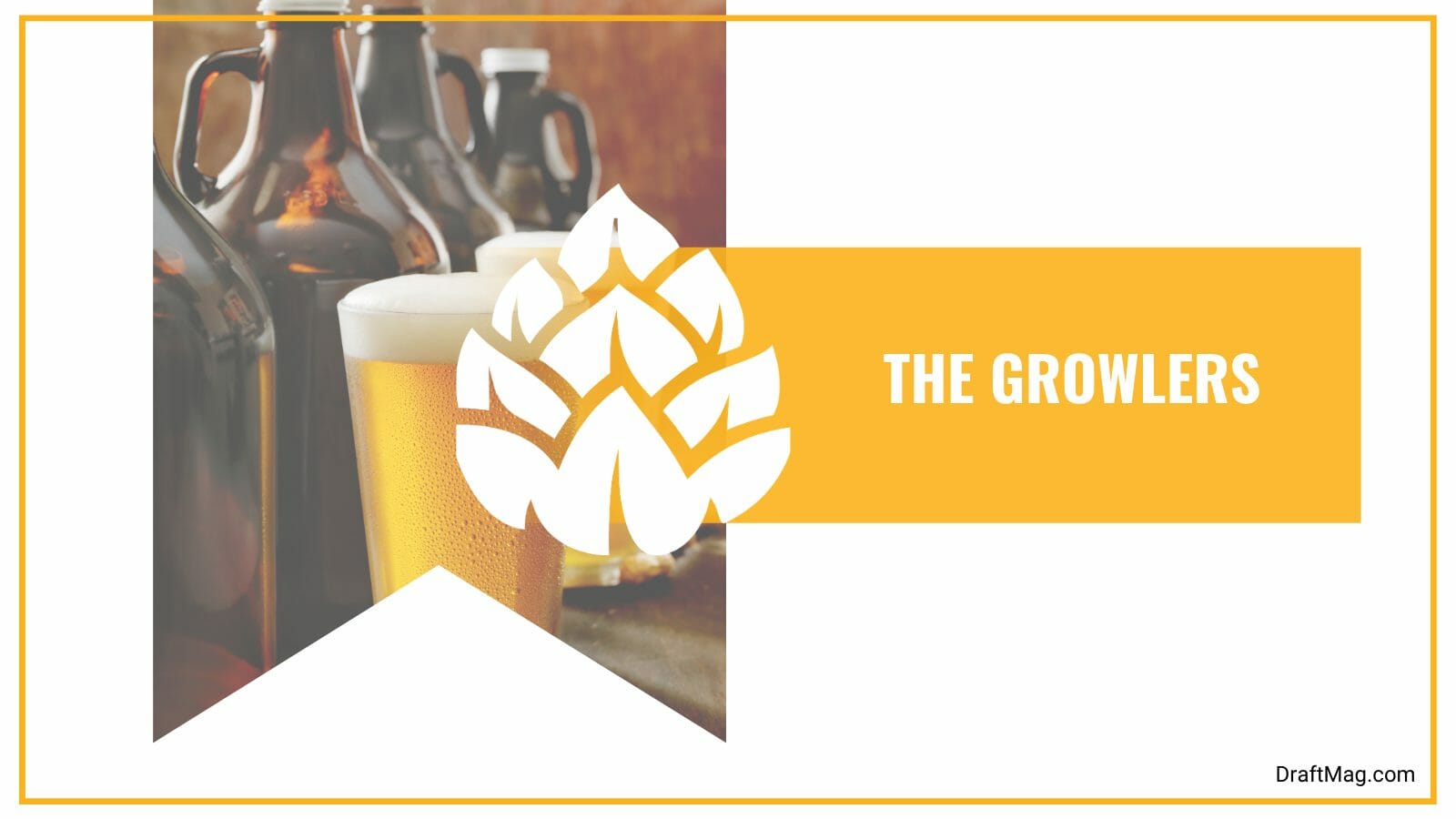 There is also the mini-growler, which is referred to as a howler and features a height of 8.8 inches as well as a capacity of 946 ml and a volume of 34 oz.

– How Wide Is a Beer Bottle?

The standard long neck bottle is 2.1 inches wide at the base.

– What Is the Circumference of a Beer Bottle?

The circumference of an average brew bottle is 4.8 inches.

We’ve looked at the various heights and dimensions of beer bottles from the nip to the growlers. Here is a summary of everything that this guide has covered:

The tallest and largest beer bottles are the growlers and mini-growlers, which stand at 12 inches and 8.8 inches, respectively. The growler can store alcohol of over 2273.1 ml in volume.