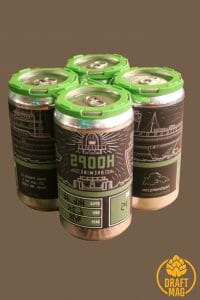 You might have had to ask, “What is a crowler?” if you drink beers from craft breweries regularly. Although most people are familiar with the growler, the crowler is something new that beer lovers aren’t used to.

However, this is a great way to get beer, especially since it keeps it fresh and is pretty unique. This complete guide shares all you need to know about a crowler before getting your next beer to-go.

What Is a Crowler?

A crowler is a growler in a can, which is a 32-ounce aluminum vessel focused on keeping your beer fresh until the moment you drink it. You open a crowler the same way you open a regular can of beer, and the filling process involves removing the oxygen in the container so that it remains fresh.

Here is everything you need to know about these awesome containers!

– Why Are Crowlers so Popular?

Crowlers are popular because they are convenient. You don’t have to bring a heavy glass jug to a brewery when you need a refill, and there is no cleaning required. Also, unlike growlers, you don’t have to pay for another one if you forget yours at home.

With a crowler, you can visit the brewery, pick up a can and go home. And when you’re done, you can throw it in the recycling bin and get another one. Also, crowlers can be quickly brought with you when you have an outdoor activity that requires a lot of beer.

Growlers are illegal to take into many public spaces, but you can take your crowler to parks, hiking trails, pools, festival events, campgrounds, beaches, and bike paths. As long as alcohol is legal in those areas, you can take it.

It is also challenging to get glass growlers delivered to your home rather than a crowler. Aluminum crowlers allow you to ship beer from one place to another, and it will remain fresh and fully carbonated until it reaches your home. With all of these things considered, it’s not surprising that crowlers have quickly caught on and become pretty popular.

– What Is the Process of Filling Crowlers?

Crowlers are filled differently from growlers due to the fact that the oxygen is removed from the can. This method is practiced to ensure that the beer is kept fresh for a long time. Here is the process that breweries use to fill your beer crowler:

– When Is the Best Time To Drink a Crowler?

Like any draft beer, the best time to drink a crowler is when it’s fresh and new. You should try drinking it within two weeks, but if you store it properly, it can last for a month.

There are different benefits of using crowlers to get your beer, which mainly contributed to its popularity over the years. On the other hand, some downsides discourage people from buying crowlers.

If you’re considering using crowlers, some of these benefits might influence your decision.

It is basic knowledge among beer lovers that UV light is harmful to the condition of beer. It harms the taste, so growlers are designed to have tinted glass. But crowlers are made with solid aluminum, so all the light is reflected off the can.

Crowlers are sealed airtight using a canning machine, which means that the carbonation is locked inside and the oxygen is kept out. So you can expect your beer to taste fresh when you get it. Growlers come with different screws and flip tops, but they don’t seal as well as crowlers, so you can expect them to lose carbonation over time.

Easy To Move Around

Since crowlers are 32 ounces, you can easily carry them from place to place and still get your fill. You can easily take them on trips and during events, get some from a brewery, transport it back home, and ship it to customers. Crowlers can also withstand the pressure of traveling, and you don’t have to wash them after use.

Also, crowlers last for a long time, which is another benefit for all beer lovers. Since the oxygen is kept out and vacuum-sealed, the shelf life is much longer than other types of beer packaging. 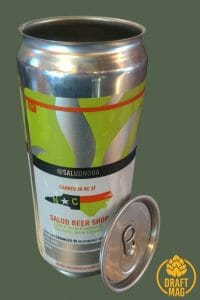 Despite the benefits, some beer lovers don’t like crowlers. Here are the downsides you should think of.

It Cannot Be Closed Once Opened

It’s important to note that you can’t close it once you open your crowler can. You can add the cap back with a growler and store it for another day, but once you open the aluminum can, you need to finish it immediately or you’ll waste the beer. Thus, crowlers are only ideal when the beer is not just for you.

They Are Only for One-time Use

Crowlers cannot be used after you finish drinking the beer, unlike growlers. With a growler, you can wash it and get some more beer, but many drinkers think that crowlers are wasteful since you always have to throw them out after use. They cannot even be reused since you can’t close them.

Differences Between a Growler and a Crowler

The main difference is that a beer growler can be purchased in both 32 and 64 ounces, while the crowler is only available in 32 ounces. So if you want a 64-ounce beer, you will need to carry two crowlers instead.

Another difference is that crowlers keep beers fresh for longer than growlers, making them better for travel and storage. Since crowlers aren’t refillable, you don’t have to carry them up and down to get them filled, unlike growlers.

Cleaning is also not required, unlike growlers, where you need to wash them out properly before adding a new beer. Washing growlers leaves room for bacteria tainting your new beer, and you don’t have to worry about that with a crowler.

How to Buy Crowlers

If you’re a consumer, you need to visit your local craft beer store and ask them for your beer in a crowler. You can check their website to see if they offer crowlers, although many craft breweries use them. If they have an online store, you can also order it at your home.

Breweries usually get their crowlers from suppliers. As they purchase crowlers, they also go for canning machines and labeling machines which they will use to fill up the cans with beer. You can buy as many crowlers as the brewery allows and always return for more.

– How Long Do Crowlers Stay Fresh?

Crowlers stay fresh for up to a month with proper storage, unlike glass containers. As long as you prevent the cans and store them at the right temperature, you can transport and store our beer until you’re ready to drink them.

How long crowlers last depend on how you take care of them. Crowlers will last longer than glass growlers, and because of the aluminum and filling process, you can use them to store your beer. On the other hand, a growler stays fresh for about three days before UV light and oxygen influence the taste.

– Can Crowlers Get Warm?

Yes, they can. Crowlers are similar to any other vessel, so they are not immune to heat. If you store them in a place with the wrong temperature or expose them to warmth, it will make your beer spoil faster than it’s supposed to.

Regardless of your beer, it’s essential to store the bottle or can in a cool, dry area. Keep it away from light and ensure the area is climate controlled. This is highly important with craft beers because some breweries use more perishable ingredients. You can also ask the brewer for tips on storing their crowlers properly.

– Can I Buy a Crowler Legally?

This depends on certain factors, but mostly the state you live in. Based on the Alcohol and Tobacco Tax and Trade Bureau, the Alcohol Control Agency of a state regulates, sells, and distributes alcoholic products.

So you can check the laws in your state concerning crowlers or ask the bartender in your neighborhood. But with over 600 craft breweries in the country offering crowlers, it should be easy to find one close to you that will sell it.

It might surprise you that crowlers were founded in 2002, significantly since its popularity has increased dramatically in the past years. The first crowlers were made by the Ball Corporation in Denver, CO.

Oscar Blues was one of the first craft breweries in the USA to can their beers in 2002. At this time, many breweries were focusing on glass bottles because they were believed to be better.

Despite the trends, Oscar Blues went on to can their beers, which led to other craft breweries also using it instead of glass bottles. But if they wanted to meet customers’ demands, they needed bigger cans, so they turned to Ball Corporation to make them a 32-ounce beer can that could be used on-demand.

Today, the crowler is a big hit in craft breweries worldwide.

– How Many Pints Is a Crowler?

A crowler is two pints of beer, as one pint is 16 ounces. Growlers offer more when you buy the 64-oz beer.

– How Long Is a Crowler Good for After Opening?

Once a crowler is opened, it lasts for 24 hours, just like your regular beer can. It would be best to open it when you’re sure you can drink it all at once.

The next time you’re visiting your favorite craft brewery, you now know what a crowler is and can decide to try one out! They are convenient ways to carry beers for you and your friends.

You can buy crowlers from a craft brewery close to you, but check your local laws first.