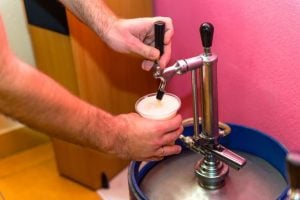 How to empty a keg? Whether you have a beer keg for a party or you work in a brewery, knowing it is essential. Using a tap to pour and drink the beer is, of course, the easiest way. However, there are many types of kegs you’ll come across, and each has its own emptying method.

In this guide, we’ll take a look at the most common types and explain, in each case, how to get beer out of a keg. Let’s get started.

How To Empty a Keg at Home

There are usually two types of kegs you will have at home: either a party keg or a corny keg for homebrewing. Let’s take a look at each one.

A party keg or a mini-keg is the most likely type you’ll have in your home. This is often a 5-liter (1 gallon) metal keg fitted with a tap for easy dispense. It is also the only type of keg that has a tap attached by default. Here’s how party kegs work.

– How To Empty a Corny Keg for Homebrewing

If you’re a homebrewer, you may be tempted to switch to kegs rather than bottles. Most homebrewers will use 19 liters (5 gallons) corny kegs, or cornelius kegs, which don’t have a tap. It’s easy to empty a keg without a tap, as corny kegs are typically fitted with a wide lid, which also facilitates cleaning.

You must make sure that the corny keg is depressurized before you attempt to open it. To depressurize a corny keg, simply attach the gas connector to the keg. For better control, it’s worth attaching a hose to the quick-connect and fitting a picnic tap. This way, you can control the escape of the gas. Some corny kegs also have a special pressure release valve.

With the keg depressurized, you can now safely open the lid. To empty it, simply pour the contents into a drain. The keg can now easily be cleaned, ready for your next batch of beer.

How To Empty a Keg in a Brewery 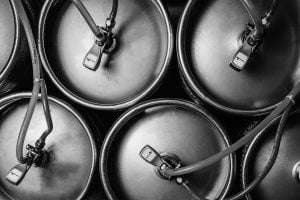 When you work in a brewery there’s always at least an empty beer keg that needs cleaning and refilling. Emptying them may seem easy, but there’s more than one type of keg, and more than one way to empty it. Even seasoned brewers may struggle with new or old beer kegs that they haven’t used before.

Breweries use different types of kegs, none of which have a tap. Let’s take a look at the most common ones.

– How To Empty a Metal Sanke Keg

Sanke or Sankey kegs are fitted with a single valve on the top, in which a keg coupler can be fitted to allow gas into the keg, and beer out. Metal Sanke kegs are typically made from stainless steel or aluminum, making them ideal for reuse. Here’s how they work.

Let’s Dive Into the Process!

Emptying a Sanke keg before cleaning and refilling it is essential. One of the easiest ways to do this is to hook up a tap on the beer outlet, and a CO2 or pressurized air hose on the gas inlet. Then, open the tap until the keg is empty. However, there will normally be a little bit left in the keg regardless. To drain a keg completely, you have a couple of options.

Use a special tool, or key, to remove the coupler valve from the keg. Before doing this, it’s essential that the keg is completely depressurized.

To depressurize a keg easily, attach a coupler and allow all of the beer and all of the gas to escape. You’ll know that there’s no more pressure when it stops hissing. Once you’ve used the tool to open the keg, you can spray inside with a hose and tip it upside down to drain it fully.

If you don’t have the tool, or your keg can’t be opened, you can still fully drain it. Here’s how.

It’s worth keeping a special coupler in the brewery, especially for this task. Even better, a good, automated keg washer will do most of the work for you.

– How To Empty a KeyKeg

Another popular type of keg used by craft breweries is the KeyKeg. Like a Sanke keg, it works by using a single valve for both gas and beer. However, it functions in a vastly different way. The outer shell is made from plastic, and inside it has a food-grade bag in which the beer is stored.

This design means that pressurized air can be used to dispense the beer, rather than CO2 or beer gas, saving cash and reducing the chance of spoilage. Pressurized air is pumped into the outer shell, squeezing the bag to ensure that every last drop of beer is released.

To empty a KeyKeg, hook the coupler to an air compressor rather than gas on the inlet and attach the outlet to a suitable draft system. Once the beer is finished, it’s important to depressurize the keg. Failure to do this can result in the plastic shell exploding, potentially causing injury.

Fortunately, depressurizing a KeyKeg is a piece of cake. Here’s how.

– How To Empty a UniKeg

A UniKeg is a one-use plastic keg that works more or less the same way as a Sanke keg. Emptying and depressurizing it works in the same way. Depending on the supplier, it may also have special systems to help. Here are some of the most common:

To keep things clean, only use this escape valve when the keg is nearly empty and turn it on its side until the keg is more or less depressurized.

Let’s do a quick recap of what you’ve learned in this guide.

This wraps up our guide to emptying a beer keg. Now that you know how everything works, all that’s left to do is find a beer you like, and the right company to enjoy it with.