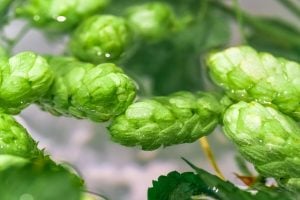 How to whirlpool hops? Read on and find it out in this article! The first thing you want to know is that whirlpool hops get this name because a whirlpool results due to the recycling of wort. The hop aroma oils add a much more pronounced flavor and aroma to the beer.

After reviewing the whirlpool hopping strategies of the professionals and homebrewers, we have brought you a comprehensive whirlpooling hops guide.

How to Whirlpool Hops? With and Without Pump

Whirlpool hops is an inexpensive technique compared to hop bursting due to many reasons. One of these is that it’s possible to create a whirlpool with or without a pump. There is no need to spend money on expensive whirlpool brewing equipment.

So, if you’re a homebrewer and want to preserve your beer flavor, then you must try this technique. The two ways to whirlpool hops are:

Note: If you don’t have the facilities to cool down the kettle mixture, turn off the flame after boiling. Allow the temperature of the wort to fall before moving on to the next steps.

When To Add Whirlpool Hops in Wort?

Once the whirlpool starts in the vessel, you can add whirlpool hops into it. The hop oils transfer their aroma and flavor to the wort, but not bitterness. The hop oils in the hops are mostly volatile, which means they can quickly evaporate if the temperature increases.

Moreover, at higher temperatures, the isomerization of the alpha acids of hop oils also increases, leading to bitterness. Therefore, if you want a huge portion of hop oils and little bitterness, the ideal temperature is 180 °F.

Should You Cover the Pot During Whirlpool Hopping? 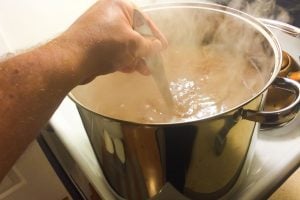 No, you shouldn’t cover the pot during whirlpool hopping, and here is why: When you cover the pot, the off-flavors volatile substances such as dimethyl sulfide (DMS) remain in the wort. The presence of DMS can destroy the taste of the beer.

But there is a counter perspective, too, that says you should cover the pot during whirlpool hopping. It stops the vaporization of quickly vaporizing hop oils such as myrcene. By covering the pot, you can preserve some of the myrcene and other quickly evaporating hop oils.

So, the final decision is up to you. You can either keep the pot covered or not — although the first option risks jeopardizing the results if you are not an expert.

How Long Should a Whirlpool Last?

While most websites say that a whirlpool should last for 10 to 20 minutes, this is not true. The process isn’t that simple and is more concerned with a specific temperature than time. The ideal temperature creates the least amount of bitterness and most flavor or aroma in the beer. In short: Take your time!

Temperature is a significant factor in preserving the aroma oils in the beer. As many hop oils are volatile, they require a temperature below the boiling point. If the temperature increases, they evaporate and will not be present in the beer.

To preserve these oils in the beer, whirlpool hop additions play a critical role at a temperature below boiling. There are different temperatures at which whirlpool hops additions are made to the wort. These include:

It’s also known as the high isomerization range, and the temperature for this is about 185-210 °F (85–99 °C). In this temperature range, some of the hop alpha acids are still isomerized, due to which a trace of bitterness is added to the beer.

You can use this temperature for whirlpool hops if you want a bitter flavor with some hop oils in your beer. But keep in mind that, at a higher temperature, there is more risk of vaporizing large amounts of hop oils.

The temperature for the medium whirlpool range or medium isomerization range is 160–170 °F (71–76 °C). As the name indicates, there is a little isomerization that will not add much bitterness. Moreover, the volatilization of the hop oils is reduced, so you’ll get a larger portion of hop oils.

The best thing about medium-range whirlpooling hops is that the wort remains hot enough to enhance hop oils’ solubility. Moreover, this range doesn’t require an excessively long whirlpool. It’s best for you if you’re a homebrewer and want to keep the whirlpool time short while preserving hop oils.

In the low whirlpool range, the temperature is 150–160 °F (60–66 °C). At this whirlpool hops temperature, the volatilization of the hop oils will be less due to a lower temperature. But this decrease in temperature will also reduce the solubility of hop oils; thus, a longer whirlpool is required.

This temperature range is mainly used to preserve highly volatile and less soluble hop oils, such as myrcene. Also, some pro brewers use this as they have better control over the whirlpool temperature and time.

Yes, the quality of hops affects the beer quality during whirlpool hopping. High-quality hops that tend to be expensive have a high level of aroma and better flavor. Moreover, the bittering content of quality hops is less than the typical hops.

Can a Wort Whirlpool Save You Money?

Yes, it’s possible to save money using a wort whirlpool in the long run. When a whirlpool is created, the energy flow in the liquid increases. This increased energy leads to faster heat dispersion, which causes the temperature to fall quickly.

The few ways this process can save you money are:

Whirlpool hop utilization helps in calculating the amount of hops utilized during the whirlpool. It helps maintain the IBU (International Beer Units) balance of beer when a large number of whirlpool hops are added.

We have covered all that you should know about whirlpool hops in this post. Let’s have a quick glance to ensure you haven’t missed any crucial points.

Whirlpool hopping is an easy and quick way to make quality beers, as it reduces bitterness while adding flavor. Even if you’re a homebrewer without any extravagant brewing devices, you can give it a try. With a bit of effort, the results you’ll get will be amazing!