“Is ginger beer good for you?” is a common question among those who are looking for healthier alternatives to good old beer. Ginger beer is a perfect blend of several cocktails and only a few people are aware of its health benefits. Some people might just view it as a recreational beer, but because of the lemon and ginger present, it s a truly powerful drink. 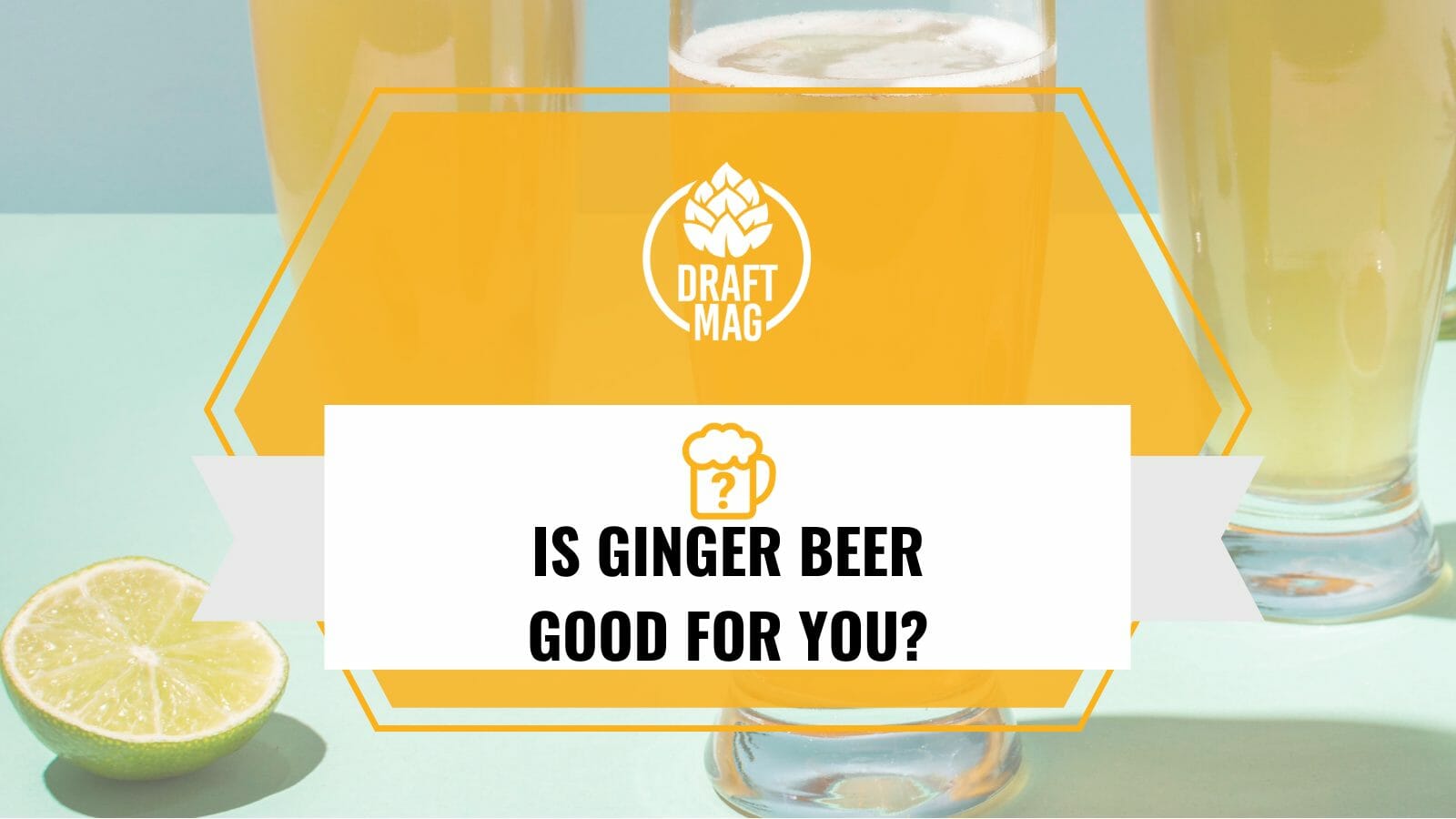 Pull up a stop and grab a ginger beer as this complete guide opens your eyes to the amazing benefits of ginger beer.

Is Drinking Ginger Beer Good for You?

Yes, drinking ginger beer is good for you because it consists mainly of ginger, which is considered a medicinal plant. Ginger contains gingerol, vitamin B6, natural oil, and minerals like manganese, copper, magnesium and potassium. Ginger beer has been known to improve digestion.

Many people do not like the natural taste of ginger, so they prefer to consume it in a beer.

What Benefits Does Ginger Beer Have?

Some benefits that ginger beer is known to have include relieving nausea and improving digestion, antibacterial benefits, anti inflammatory properties, slowing down aging, and lowering the risk of certain illnesses. Ginger beer is a refreshing and chilled beverage that is healthier than most carbonated drinks available in the market. 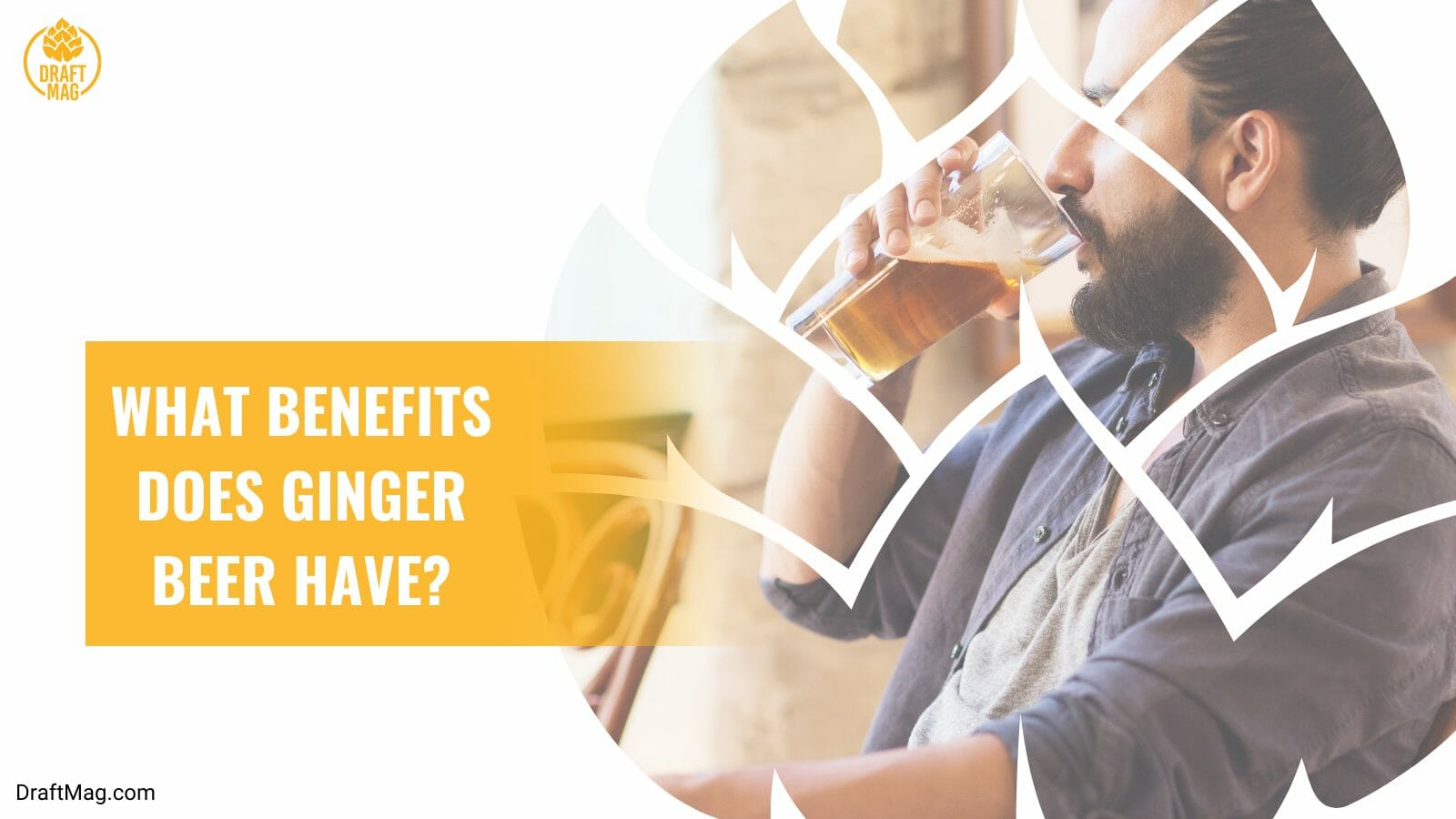 You can even prepare this beverage on your own at home. These are some of the reasons why ginger ale is good for you:

Strangely, ginger beer works wonders for morning sickness. Gingerol and shogaol are the two active substances in ginger and they help reduce stomach irritability, increase saliva and bile secretion, and activate pancreatic lipase. In this manner, it improves digestion.

Ginger beer consumption can be an alternative to constant workouts and a proper diet when illness, injury recovery, or pregnancy doesn’t allow such regimens. You can be confident that ginger is a natural, risk-free plant without side effects.

The active constituents of ginger make it a very effective antibacterial agent. According to a study, ginger can efficiently inhibit four pathogens that cause inflammation in the respiratory tract. 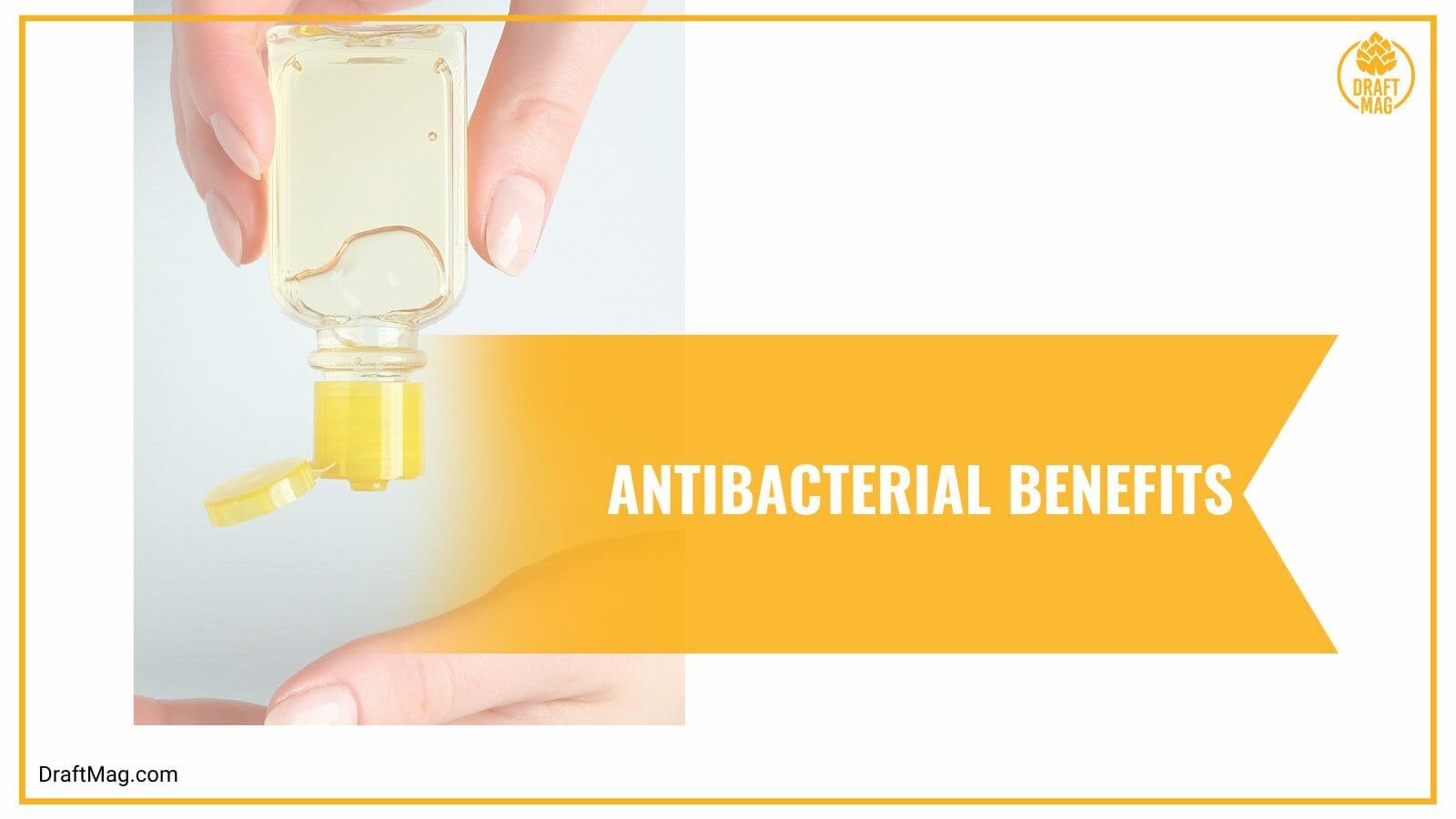 Even scientists have demonstrated the superiority of ginger extracts over antibiotics. Consuming ginger beer with gingerol can help fight Streptococcus pyogenes and Staphylococcus aureus.

Ginger beer can be helpful if you suffer from gastritis, esophagitis, hepatitis, arthritis, osteoarthritis and other kinds of inflammation. Additionally, the active component effectively helps reduces inflammation and relieve pain when you consume ginger regularly.

Guess what — if you like ginger beer, you may thank it for making you look young. By consuming this beverage, you can delay aging and stop wrinkles from forming. It works by Increasing dopamine and serotonin levels and lowering emotional or psychological stress. 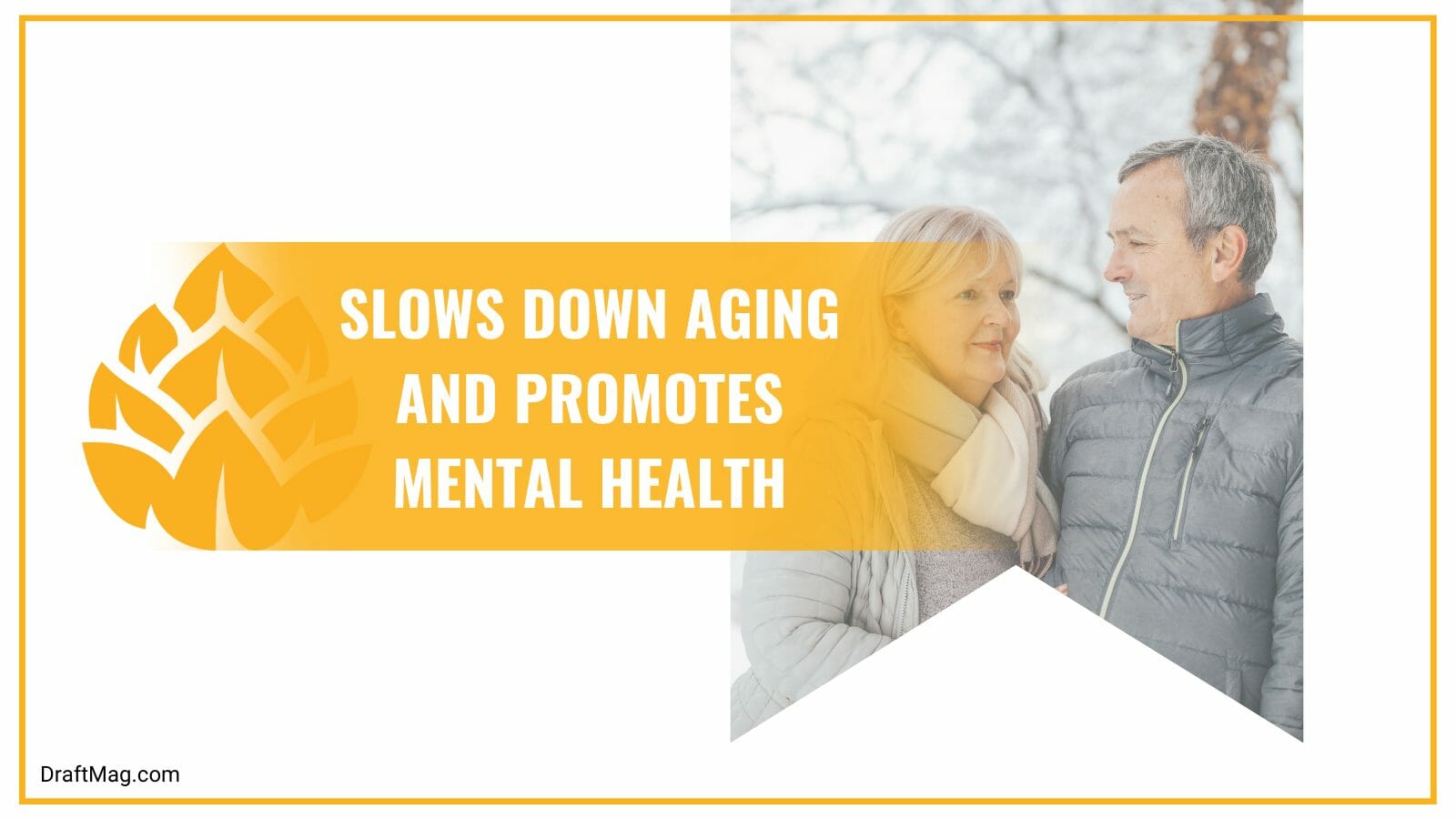 Ginger plants are generally known for their mental health benefits. Some of the benefits include being less at risk for the following ailments:

Additinally, it speeds up the activity of the neurotransmitter acetylcholine, which helps improve memory and learning.

– Lowers the Risk of Cancer

The effectiveness of ginger in treating cancer is still up for debate. However, early research suggests that the active ingredients in ginger beer have anti-cancer potential.

According to a study, ginger is helpful against cholangiocarcinoma and gastric, liver, and pancreatic cancer. If you are aware that liver and gastrointestinal cancer are among the most prevalent cancers globally, you would appreciate the significance of consuming ginger beer more often.

– Good for Your Heart

Is ginger beer good for your heart? Studies have proven the benefits of ginger beer on the heart. It shows that it lowers cholesterol and blood pressure. 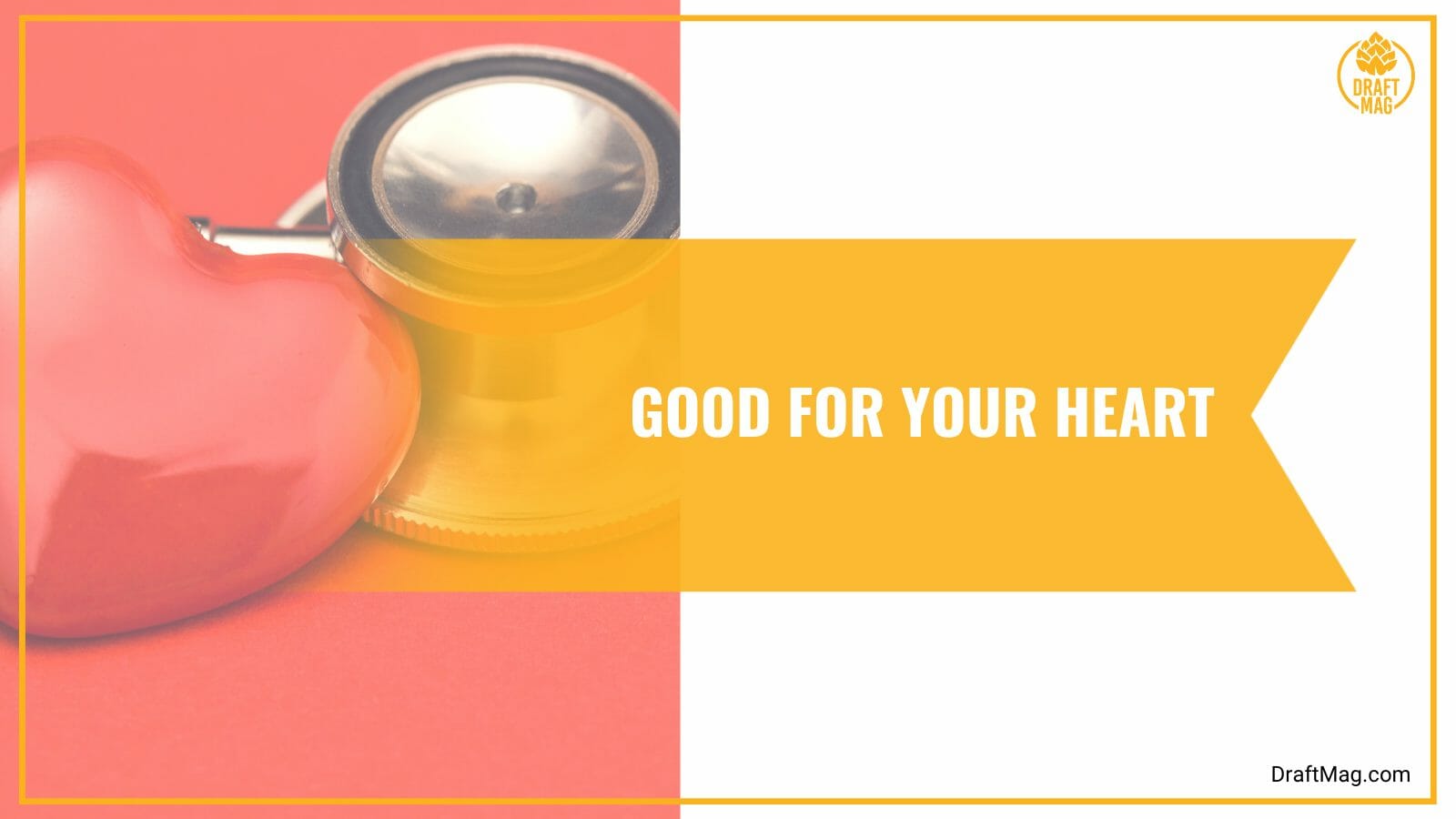 However, because ginger beer has fewer active constituents, it can still offer you a cardiovascular boost.

Although the name of the drink could sound like it doesn’t always contain alcohol, ginger beer is a non-alcoholic beverage. This fiery drink’s original form was an alcoholic beverage prepared by fermenting water, sugar, and ginger. Nowadays, the majority of commercial beers are alcohol-free.

Many people love this drink for cocktails because it is not as sweet as ginger ale and has a little more taste and flavor. It tastes stronger, more potent, and slightly less sweet. Ginger ale is a better choice if you love bubbles in your cocktail because it is also less carbonated. Due to its richer flavor, it is most frequently used in more complex cocktails. This answers the common question “Is ginger beer alcoholic?”

What Are Ginger Beer Side Effects?

Some side effects of consuming ginger beer include issues regarding blood clotting. According to a review of studies in Natural Product Communication published in August, ginger can prevent the blood from clotting properly. The researchers also advise against the long-term use of ginger because it may interact with blood thinners. 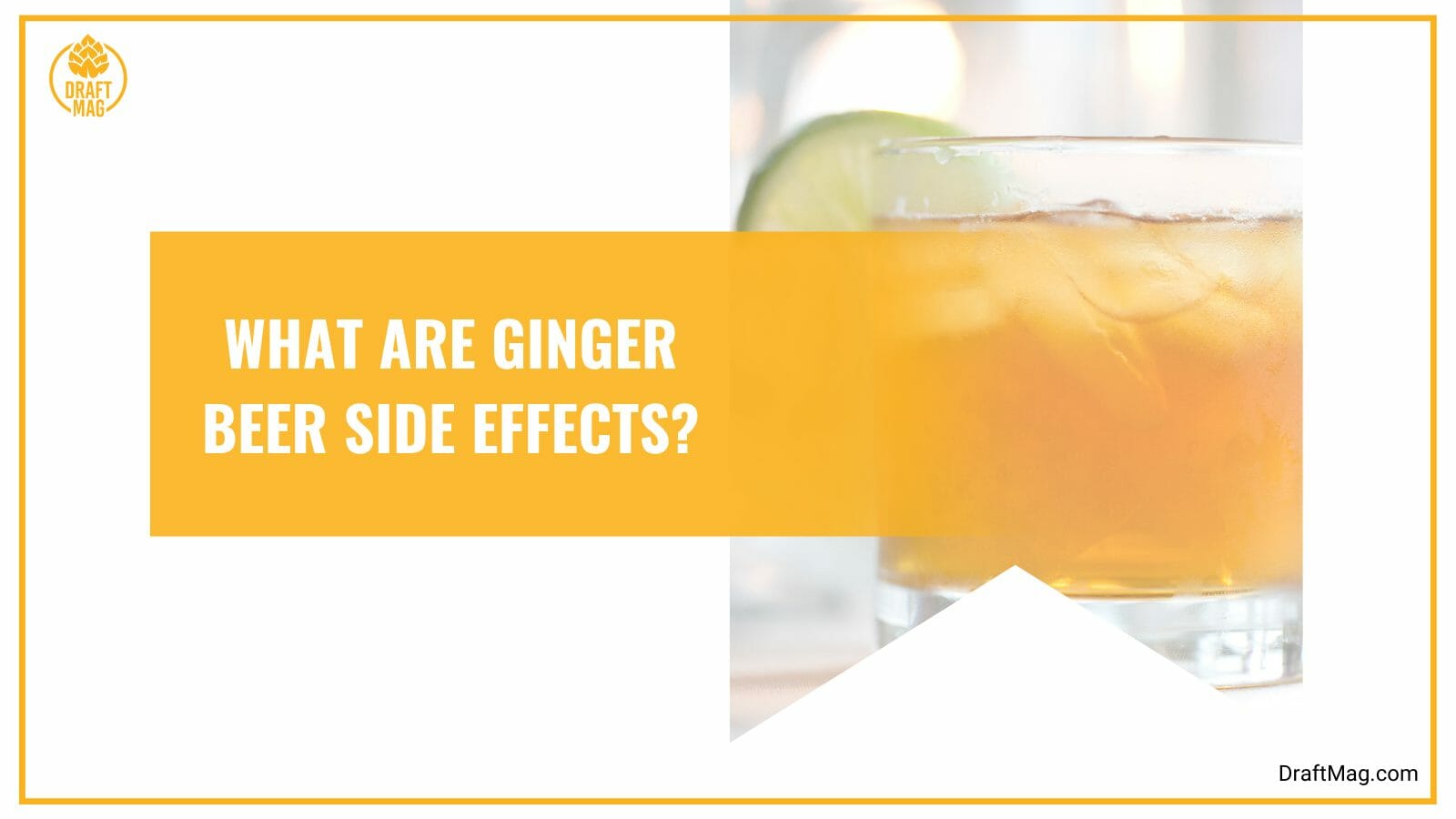 Although much research has shown that ginger beer is good for you, it doesn’t mean that it wouldn’t have some side effects that can harm your health. Ginger can benefit your heart like every other food but can also cause severe damage. For example, ginger can interfere with drugs and affect blood clotting.

However, it is unclear whether consuming ginger could have a similar impact on the effectiveness of this class of medications.

Is Ginger Beer Bad for Your Liver?

No, ginger beer is not bad for your liver. In fact, herbalists from various cultural traditions are well aware of the therapeutic benefits of ginger. Scientific research has confirmed some of ginger’s alleged health benefits, especially some relating to liver function.

Some of the reasons why hunger beer is not bad for your liver include:

Chicory and ginger demonstrated liver-protective effects in a study published in September 2010. In the study on lab animals, ginger at doses of 250 and 500 milligrams per kilogram of body weight and chicory at the same doses both effectively reduced liver damage and returned blood composition to normal. 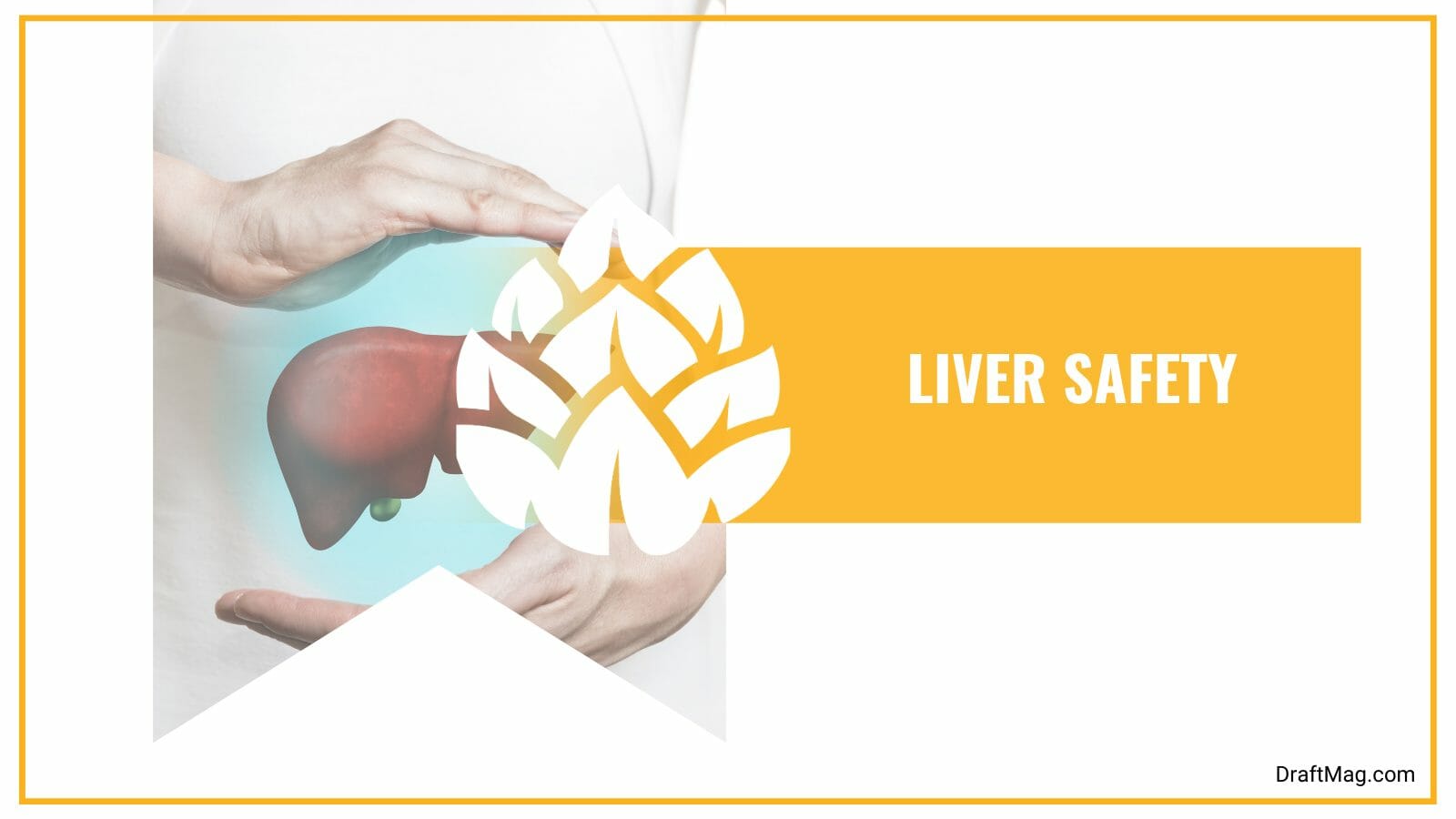 At levels up to 5 grams per kilogram, neither drug had severe consequences. Improvements from the two supplements were also seen when liver tissue was examined under a microscope.

According to research printed in the June 2011 issue of the journal “Nutrition and Metabolism,” ginger may prevent liver fibrosis, a kind of degenerative scar development. Researchers evaluated a number of ginger preparations and discovered that all of them raised the levels of liver-useful antioxidant enzymes, including glutathione and superoxide dismutase.

Researchers concluded that ginger has the potential to be used to cure liver fibrosis. To corroborate these preliminary findings, additional clinical trials are required.

According to experts in the biology department of King Khaled University, Saudi Arabia, schistosomiasis, a parasite that destroys the liver and intestines, may react favorably to therapy with ginger extract. Ginger produced the strongest suppression of the parasite among several examined herbs in the study. 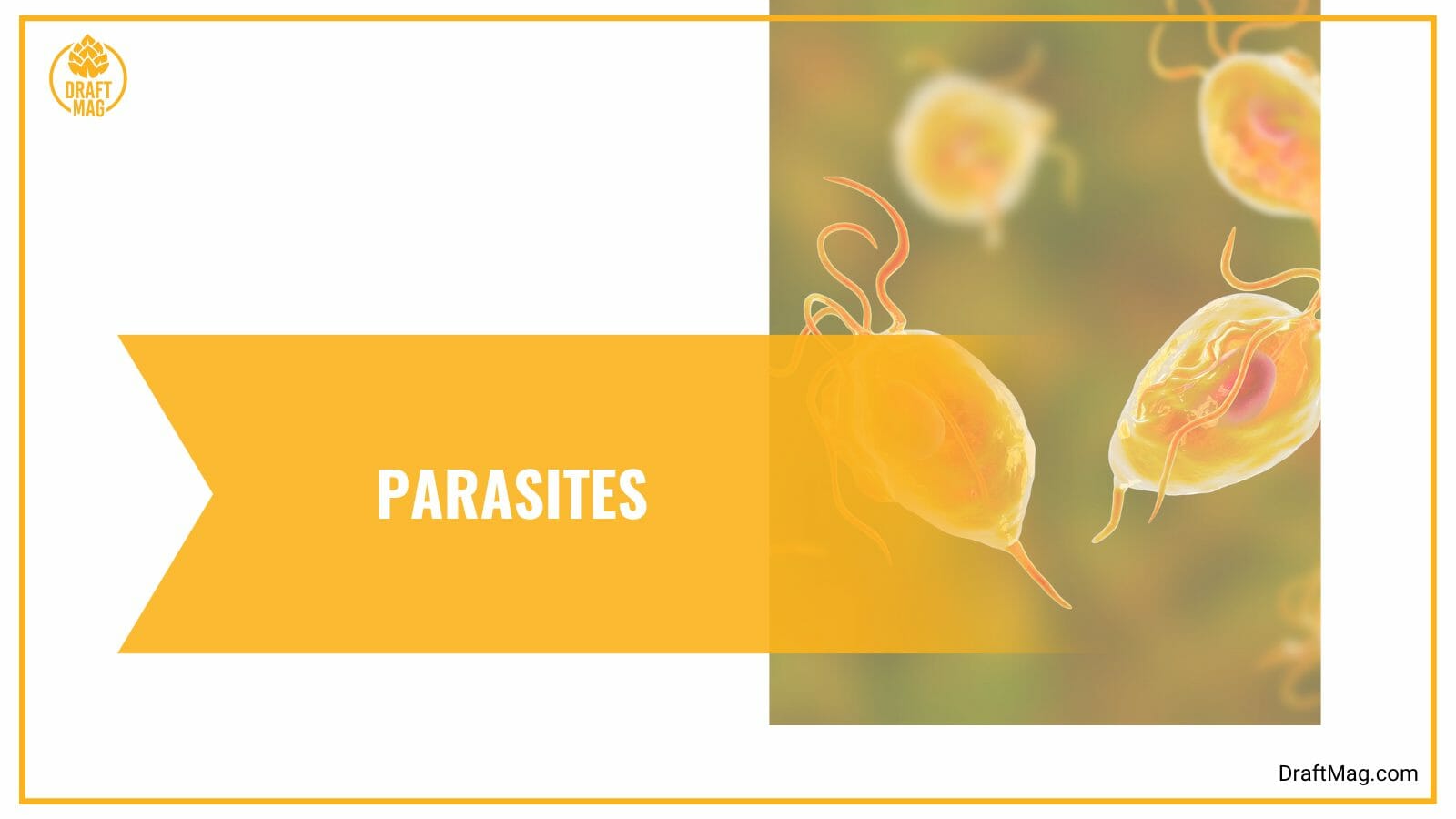 Ginger treatment on worms resulted in changed surface structures, with some sections lost and others eroding. Animals given ginger treatment had fewer and smaller damaged areas in their liver tissue when examined under a microscope. The research was released in the Parasitology Research journal’s February 2011 issue.

According to researchers who conducted a study published in January 2011 in the journal Gastroenterology, ginger may prevent nonalcoholic fatty liver disease. This is an increasingly prevalent condition linked to insulin resistance rapidly approaching epidemic proportions.

How Do You Make Healthy Ginger Beer at Home?

To make healthy ginger beer at home, you will need to have the correct materials and enough ingredients, then heat the ingredients and let it ferment for several days. Since no chemicals or preservatives are used during the preparation process, homemade ginger beer has better health advantages than store-bought beers. 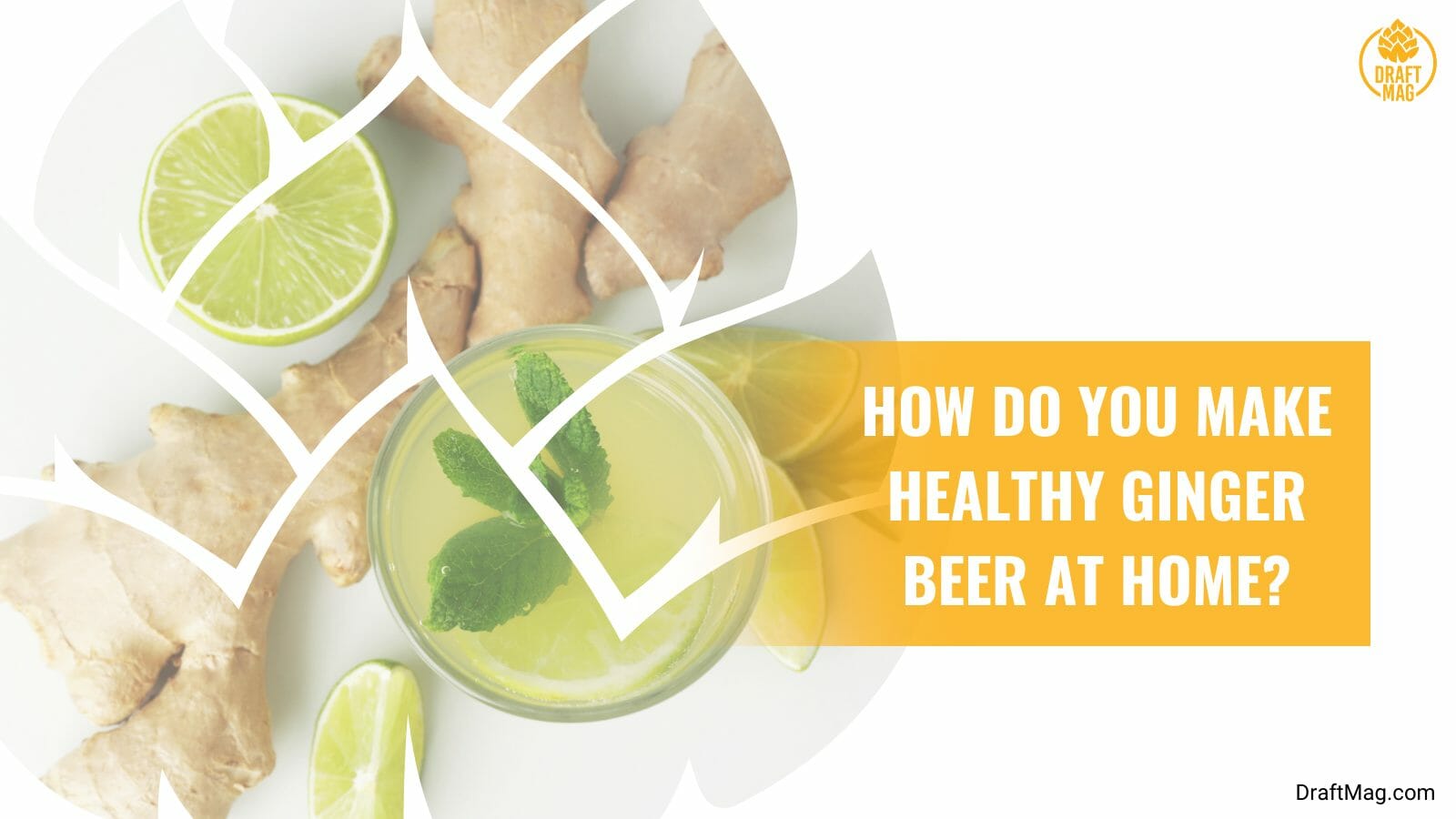 It is impossible to overemphasize the health benefits of drinking ginger beer, but if you can make your own, the benefits will be even greater. You may enjoy a cool beverage at any time of the day by making ginger beer at home.

How to make ginger beer the healthy way? The ingredients you need are:

Mix the lemon juice, cream of tartar and the grated ginger in a large pot. Then add four cups of water to the mixture and boil at a high temperature. When the mixture is fully boiled, reduce the heat and add sugar, stir the sugar until everything has dissolved.

Now add about five cups of water to the large pit and wait for it to cool to about 75 degrees Fahrenheit before adding the yeast and stirring properly. Use a towel to cover the pot and store it in a dark and warm part of your house, then let it rest for about three hours. Pour the mixture into a big pitcher and remove the pieces of ginger using a fine strainer.

Swing-top glass bottles should be used to transfer the liquid, then keep in mind that the fermentation will produce carbon dioxide, so only fill the bottles about two-thirds full. The pressure inside the bottles could cause them to blow up if they are fully loaded.

Let the fermentation process persist for two to three days by placing the bottles in a warm, dark area of your home. To lessen the pressure, gently loosen the caps up to three times each day and the ginger beer may be chilled if desired. The microbial activity in the beer will stop if it is refrigerated, and it will restart if it is left at room temperature.

Ginger beer is good for you, so if you haven’t tried it out before, you’re missing out on a lot of sweetness. It is not just a regular beer but a beer with many amazing benefits, so get one in any liquor store in your area today!