Tipsy vs drunk is a notion that most people would find hard to differentiate as they are both symptoms of drinking. People pass through different drinking stages, with tipsy being the first one. But once the alcohol kicks in, the stage of being drunk and even passing out will occur. If you want to know the difference between drunk and tipsy, read the complete guide below. 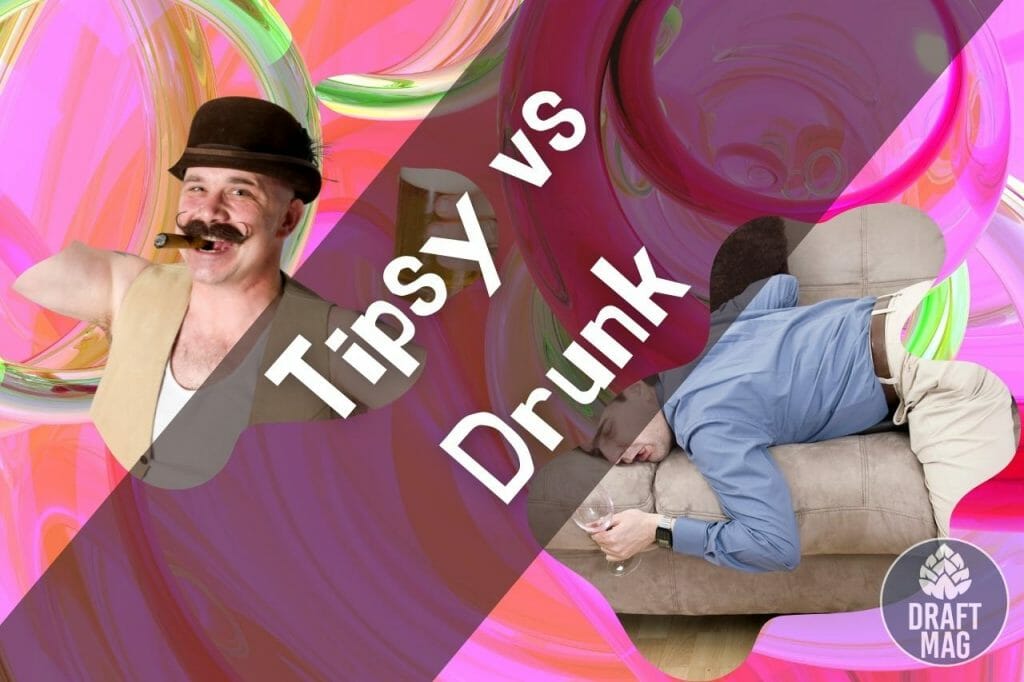 What Are the Differences Between Tipsy and Drunk?

The main difference between tipsy and drunk is that tipsy is the effect of alcohol on your body, where the person will be excited and confident. In contrast, being drunk is an intoxicated stage which includes blackout and vomiting, and the level of alcohol in the blood would be high .

What Are the Characteristics of being Tipsy?

Tipsy is considered the first stage of alcohol intoxication and the first sign that the alcohol one’s drinking affects the body. One will feel happy, but at the same time a little trippy from the beverage they are having as their nervous system gradually slows down.

– Alcohol in the Bloodstream

When the alcohol enters the bloodstream, tipsiness begins, as it starts to affect the functions of the body and the brain. The blood alcohol content when a person is tipsy is between 0.03 and 0.12 percent. Alcohol will affect the initial reactions and impulses of the body and increase the feeling of being highly confident.

People usually reach this stage within an hour of drinking alcohol. How quickly a person gets tipsy depends on their age, gender, body size, drinking history, amount of food eaten, and whether they’ve taken drugs along with the alcohol.

Smaller people, females, older people, and new drinkers will get tipsy more quicker than others. Also, if you don’t eat before drinking or you consume drugs with alcohol, you can get tipsy quickly.

When a person is tipsy, they show different signs. A person can also get injured when they are tipsy. Some of these signs include being very more self-confident than usual, leading them to do things they don’t usually do.

They have a short attention span and find it hard to remember things. They are more likely to take risks to prove they are brave and can do things they don’t usually do when sober.  Lastly, they talk a lot instead of listening and are very lively, and when they do listen, they don’t focus at all.

Some of the clinical aspects of a person who is tipsy include the motor nerves slowing down and react slower than usual. The person will have temporary short-term memory loss and be out of sorts. Lastly, they will have less attention to detail, meaning to what they are saying or hearing the person in front of them say.

The tipsy trip takes about six hours for the effects of being in this state would wear off, and it can take longer if you include the hangover period after drinking alcohol.

What Are the Characteristics of Being Drunk?

the characteristic of being drunk is when a person has advanced from being tipsy and buzzed to words like ‘hammered’ and ‘trashed.’ Being drunk is the advanced stage of consuming alcohol, as the level of alcohol in the blood is high, and the thinking process is slow.

Some people would be able to drink three to four alcoholic beverages and become drunk, while others can drink more and still be tipsy. Also, the frequency and timeframe of drinking alcohol can determine how quickly you become drunk. For instance, you can become sober after drinking four to five drinks in about five hours.

When a person is drunk, the blood alcohol content is between 0.18 and 0.30 percent. A man becomes drunk after consuming three to five drinks in an hour, while a woman will get drunk after taking two to four drinks.

With too much alcohol in the system, a drunk person can experience symptoms like dehydration, seizures, and vomiting. They can also get injured easily and become confused. After waking up the next day, a drunk person will most likely forget what happened the day before. They will also feel more hangover than they would’ve been if they were tipsy.

When a person is drunk, they exhibit more prominent signs than someone drunk.

The person makes emotional outbursts, including laughing or crying uncontrollably. They get emotional at the slightest things that happen at that moment. They cannot walk properly or even stand up straight.

They don’t feel any pain if they are injured, but because of the high alcohol level in their bloodstream, their nerves would be weakened and numb. They feel dizzy, and their vision is blurry. They experience a blackout afterward and don’t recall what took place. and lastly, they lack understanding of what is happening around them.

As for the clinical signs, there are several to keep in mind: Loss of coordination and poor thought process. They have a confused mental state. The brain responds slowly to stimuli. The body loses balance, or the muscles will get cramped.

If drunk, you might exhibit poor judgment, loss of coordination and balance, vision changes, and slurred speech. There are different stages to being drunk, from sober to dying, and everyone reacts differently to alcohol, so it depends on the person.

– How Can I Get Tipsy But Not Drunk?

To get tipsy, you should eat while drinking alcohol and slow down. This will slow down the rate of alcohol being processed in the body.

Based on our tipsy vs drunk article, the two terms are quite similar but can be differentiated while drinking. The main difference is that being tipsy means you’re in the initial stage of intoxication while being drunk is an advanced stage.

When you’re tipsy, you will feel the light effects of drinking alcohol, but it might not lead to a blackout, hangover, or nausea. But when you feel drunk, you experience a major loss of coordination and confusion. How long it takes to be tipsy or drunk depends on different factors.