Can beer go from cold to warm back to cold is a compelling question that has troubled beer lovers for years. Drinkers are often of the notion that a temperature change can somehow affect the beer quality and cause skunking. 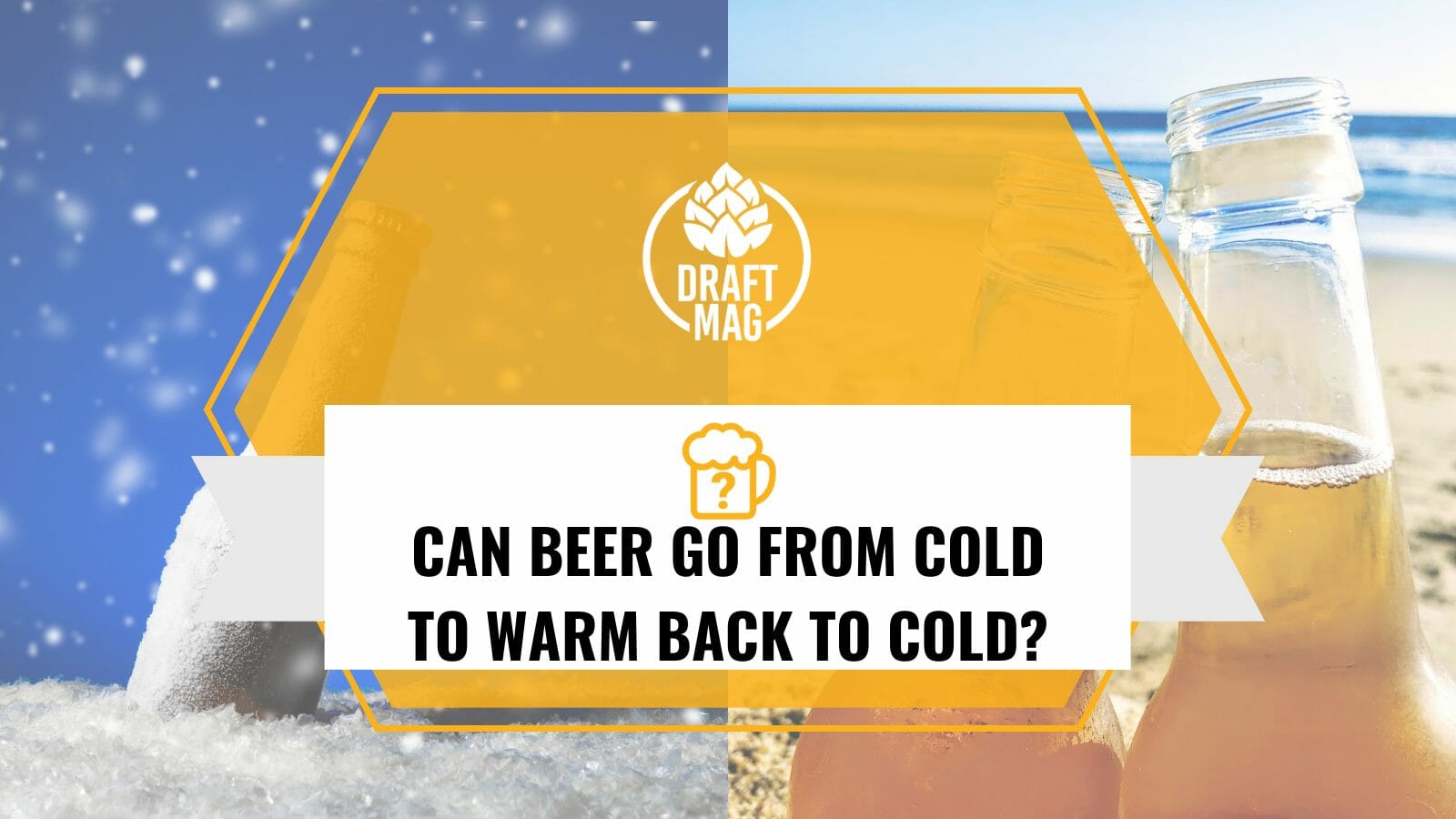 However, the latest observations seem to state quite the opposite. In this complete guide, we will learn that temperature changes cause almost no effect on the freshness or quality of beer, so read on!

Can Beer Go From Cold To Warm and Back to Cold?

Yes; a change in temperature does not affect the quality of the beer, so it is safe to state that beer can actually go from cold to warm back to cold and still be safe to consume. We often contemplate how beer would react to frequent changes in temperature, so this is welcome news indeed.

The best proof in support of our answer would be the import of beer through long distances. As we all know, imported beer from Europe goes through numerous temperature fluctuations, which hardly impacts the beer’s quality and freshness. A more correct statement to put forth would be that beer is mostly affected by an increase in temperature and not by temperature changes.

What Is the Effect of Temperature on Beer?

It is often found that beers exposed to warmer temperatures degrade faster than those that are kept refrigerated. Thus, the next time you want to preserve your beer better, make sure you do not leave it on the counter then put it inside the fridge. 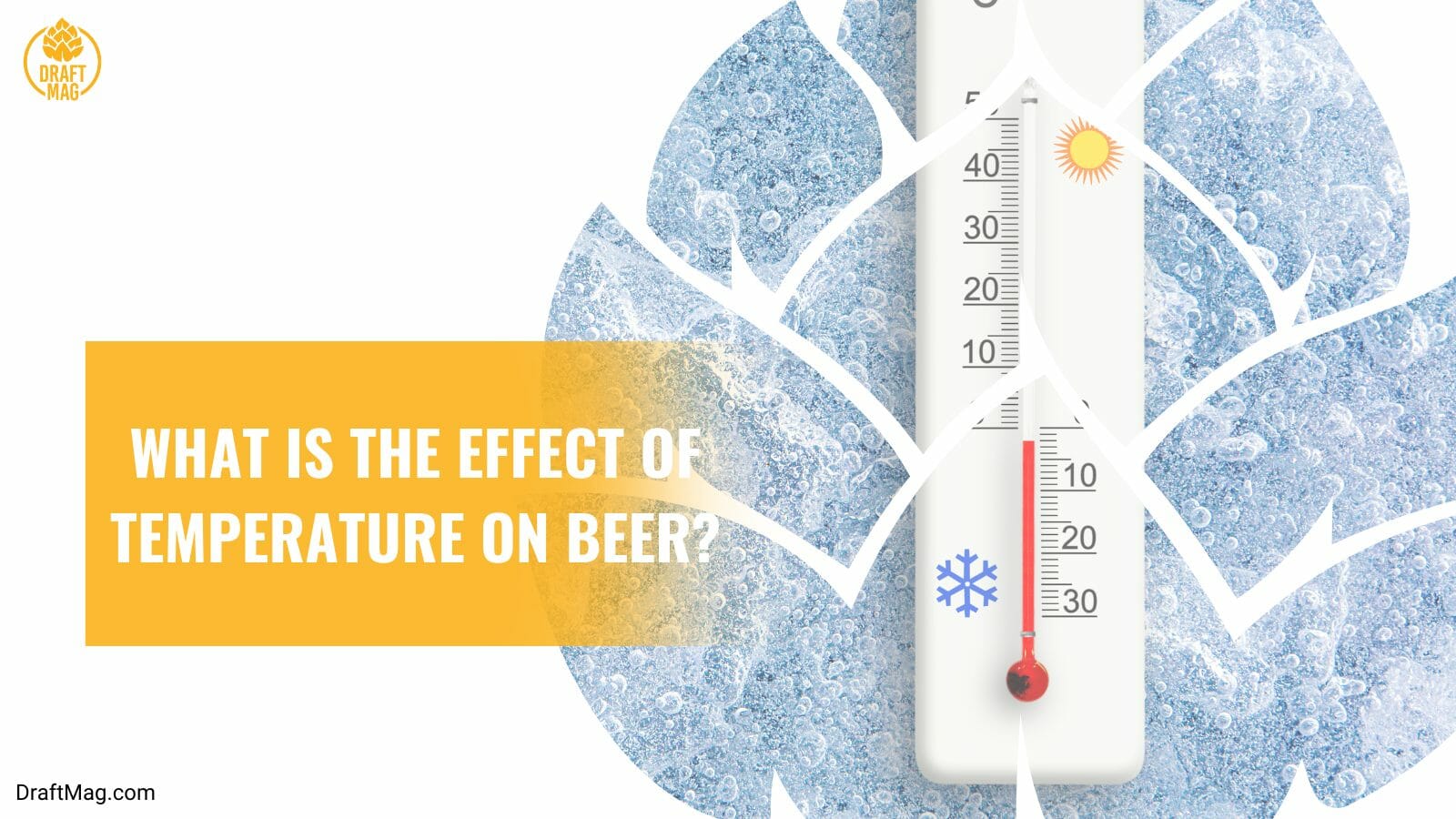 The cooler the temperature, the fresher the beer. Subjecting beer to warmer temperatures breaks down the hoppy flavor and aroma, making the malty flavor predominant and the taste sickly sweet like caramel candy. Thus, the original taste and flavor of the beer are distorted when subjected to higher temperatures.

When was the last time you asked for a can of warm beer? Funny as it sounds, there’s a reason why we prefer beer, including craft beer in chilled conditions. Instead of drinking beer warm, it tastes the best when kept at cold temperatures as it allows the beer to be the best preserved. This is true for a lot of beverages as well.

– Degrading Beer Quality Due to Temperature

Beer connoisseurs know the taste of dry, crisp, ice cold beer, which passes down smoothly, leaving a hoppy flavor behind. Hop is a plant that is added to beer to give it the much-needed bitterness in order to counteract the sweet taste of the malt.

The loss of such crispness and the addition of an overly sweet taste to the beer usually indicates degradation of its quality. A beer that has degraded in quality loses the hoppy flavor and tastes too sweet. Also, the freshness of the beer takes a toll and what’s left behind is a soggy cardboard-like aroma, which though not harmful, is definitely not pleasant to the senses.

This is when you know that the beer has been subjected to warm temperatures for quite a long time. Like any other beverage, it is best to avoid beer that has degraded in quality and only consume fresh beer that is cold to enjoy its original taste.

There is no proof to date stating that beer expires, but if you are drinking very old beer which has been in storage for more than a year, you must not expect the taste to be delicious or the mouthfeel to be fresh. In other words, though old beers won’t be harmful to your health, they won’t be pleasurable to drink.

For bottled beers, it is important that you consume them within a matter of three months at the most. The aging of beer starts soon after it is bottled and packed. In order to enjoy the freshness and make sure that you consume the beer while it is still at its best quality, make sure to consume it as soon as possible. 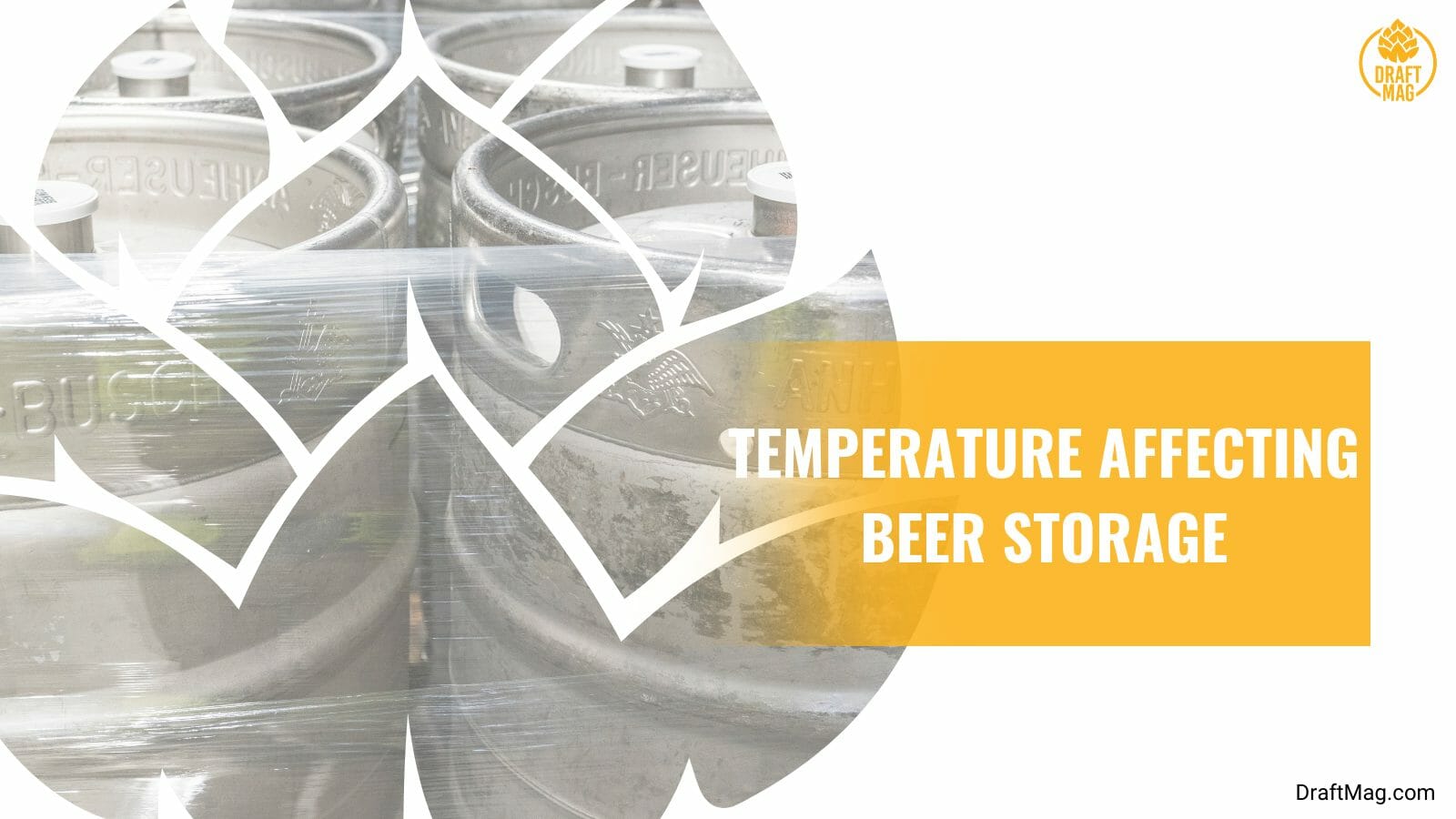 During the months you store your beer, ensure that you only keep the beer refrigerated and prevent it from being subjected to high temperatures to preserve its quality and taste. High temperatures enhance the process of oxidation, thereby degrading the beer’s taste and quality.

However, for pasteurized beer, you can go a little longer than unpasteurized ones. Storing beer at room temperature will also degrade the quality, though not as fast as when subjected to high temperatures. Roughly, a beer stored in the refrigerator will last 300 days.

First things first, put your beer into the fridge as soon as you purchase it. Even if your party may be a month later or you do not plan on drinking a can soon, it is important to store your beer in the refrigerator at all times. This will help prolong the shelf life of your beer and make it taste great.

Secondly, keep the beer bottle upright rather than store it lying down. This is because storing the beer bottle or can upright allows only the smallest amount of air to come into contact with that of the beer’s surface. When the beer is lying down, there’s a lot of empty space in the bottle or can that comes into contact with the trapped air, thereby increasing the rate of oxidation or breakdown of its constituents. Oxidation leads to stale beer, which is also referred to as skunking.

In cases where you are unable to store beer bottles in the fridge, make sure to store the beer bottles in a cool and dark place. Take note that sunlight is the leading cause of the skunking of beer, which means it goes bad and will taste and smell foul. The length of time to which the beer is exposed to sunlight directly affects the quality of the beer. The hoppy compounds in the beer break down in the presence of light, producing a chemical compound with a characteristic skunk-like odor.

Beer bottles, when unopened, can be stored for about four to six months at room temperature. Since room temperature slowly degrades the quality of beer, it is important to consume it as early as possible. After the mentioned period, beer will start to degrade fast. 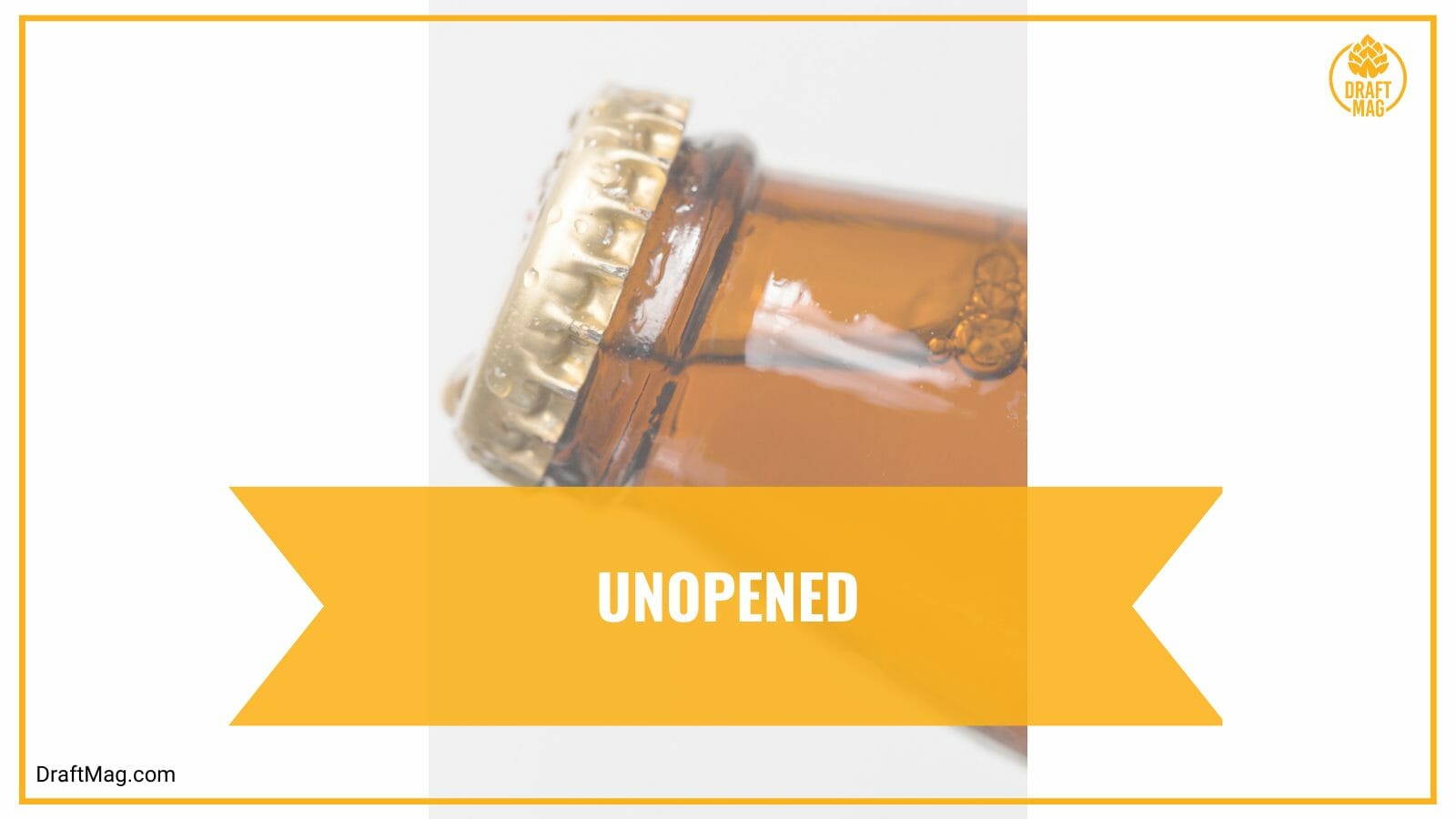 For unopened beers stored in refrigerators, the beer can be stored for a period of 6 to 8 months to be able to enjoy its best taste. The quality of the beer, however, starts degrading after that, even if stored in cold temperatures. Since the quality degrades heavily, the beer loses its characteristic flavor and taste, which is rarely as enjoyable as a bottle of fresh beer.

Yes, beer can technically be saved until the next day. Though avid beer lovers hardly leave an unfinished beer, it is possible to keep the leftover beer fresh by resealing the cap of the beer bottle tightly with materials like plastic wrap or foil. The leftover beer needs to be stored in the refrigerator in order not to go bad.

Thus, to drink your beer at its best, consume it within a matter of days. However, being a beer lover, chances are you already do that.