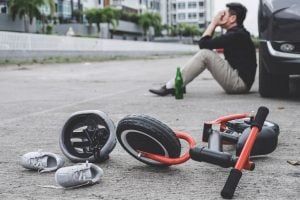 Trying to drive after one beer can lead to serious road accidents, no matter how innocent it seems. A standard glass of beer might not cause a lot of damage, but most people don’t stick to just a glass. Once there is a certain concentration of alcohol in the blood, it is easy to become tipsy. Besides, different people handle beer differently depending on their metabolism and many other factors.

In this article, we’ll examine exactly how safe you are after drinking only one bottle of beer.

If you want to know whether you can drive after one beer, what are the effects of alcohol on your ability to drive and how to reduce them, and the penalties for driving under the influence, you are in the right place. Here, you will read about the following:

Can You Drive After One Beer? The Final Answer

No, contrary to what many people might think, there is nothing like “drinking safe.” It’s deemed unsafe to drive once you have any amount of alcohol in your system. The question of “can you drive after one beer?” is shrouded with a lot of controversy. While some people may argue that it is perfectly normal because they don’t “feel anything,” it’s actually a big NO.

What You Should Know About the Allowed Alcohol Quantity

Every variety of beer has a different alcohol quantity. Some beer that you consider light might have as much alcohol content as regular beer. A lot of people usually ask: “How long after one beer can I drive?” There’s no way to know if you don’t understand the alcoholic content of the drink you’re consuming or how you might react to it.

A standard drink is any drink that has about 10 to 14 grams of alcohol which is equivalent to 0.6 or more ounces of alcohol. The beer you consume typically contains 5 percent alcohol and 12 fluid ounces. If you take more than one bottle, you’re exceeding the standard drink limit and are on your way to becoming intoxicated.

How To Drive Safely After One Beer: Some Helpful Tips

Here are some helpful tips you need to drive safely if you’ve had a pint or a bottle of beer:

There are a couple of factors that determine your BAC level. One of them is the type of drink you’re having and how many you’ve had in a period of time. What you ate alongside the drink, your gender, health condition of your liver, weight, size, height, and even age are all major determinants. To make things easier, there are preset BAC levels, each with predictable effects on the average human body.

The first level of BAC is 0.01 – 0.03 percent. At this stage, you only feel very mildly intoxicated. It brings a warmer and relaxed feeling. From there, it advances on to other levels, with the highest being 0.40 percent and above. At this point, your heart could stop beating, or you could end up in an alcohol-induced coma.

Although the first BAC is considered safe, it can still affect your performance. If your BAC level is above 0.05 percent, you’re certified drunk and unfit to drive.

Effects of Driving After Drinking: The Risks Involved

Although it sounds far-fetched, driving after one beer can cause accidents. Everyone knows how drinking and driving is a bad combination and is unarguably one of the major causes of all road accidents. In the US alone, 29 people die daily in car crashes involving an alcohol impaired driver. Perhaps the biggest risk associated with driving after drinking is death by collision, but disfigurement, paralysis, brain damage, and even coma are also common.

Even if you survive the accident, there’s always the feeling of emotional guilt, especially if other people involved got injured or lost their lives. Another effect of driving after drinking is that you stand the risk of being arrested and having your driver’s license suspended or revoked.

Penalties for Drunk Driving: How To Curb the Menace

Beer and driving never go hand in hand. Driving after one beer can end the lives of innocent citizens. For this reason, every country has driving laws that penalize anyone found under the influence of alcohol. In most countries, anyone below the age of 21 isn’t allowed to drive even with the slightest measure of alcohol in their body system.

Some penalties for drunk driving include the following:

Does a Cold Shower or Hot Coffee Reduce the Influence of Alcohol?

A cold shower or a hot dose of caffeine will not reduce the influence of alcohol on your body system. Alcohol and its effects are only eliminated after your body metabolism has processed it. That is, when it is passed out via urine, sweat, and even your breath. Trying to use energy drinks, coffee, or having a cold bath will do nothing to lower your BAC or reduce the intoxicating feeling you’re experiencing.

The body eliminates the blood alcohol content at a fixed schedule. Your liver works at all times to eliminate the presence of alcohol in your bloodstream. Hence, these options aren’t a quick fix to gain sobriety if you’re going to be driving after drinking. They can only manage to keep you from feeling extremely drowsy.

Aside from that, they don’t lower the blood alcohol level one bit. Instead of downing hot cups of coffee or having a cold bath to rid yourself of alcohol-induced intoxication, give yourself time to feel better.

How Long After One Beer Can I Drive

For most people, it takes an hour or two to process the standard beer. If you’ve had four or five beers though, you might want to wait up to four or five hours before you can hit the road again. The alcohol in your system can continue to rise even after you stop drinking. It’s important to keep in mind that nothing can help you absorb the alcohol better than just waiting it out.

How To Avoid Drunk Driving, Especially at Parties

Drinking at parties is almost unavoidable. If you’ll be driving home, there are certain things that can help you avoid driving under the influence.

You can reduce the risk of drunk driving or reckless behavior by:

With these points highlighted, it is best to not drive after drinking, especially if you’ve had a couple of beers. Instead, you can wait till you’re calm or call an uber to come pick you up. However, there are helpful tips that can help you stay safe if you must drive after drinking.