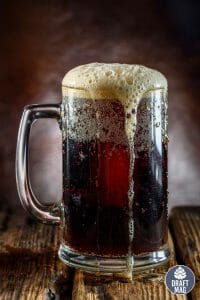 If you’ve ever found yourself wondering “Does Berks root beer have caffeine?” then the answer is yes — Barq’s root beer does have caffeine. In fact, it is one of the few root beers that have caffeine, and according to the brewers, “ Barq’s has bite,” which hints towards the presence of caffeine content.

However, the good news is that only regular Barq’s root beer has caffeine content, whereas its diet version is caffeine-free.

You must be curious about the source and quantity of caffeine in Barq’s root beer, so this guide answers all such questions in detail about your favorite caffeinated root beer.

Does Berks Root Beer Have Caffeine?

Yes; the regular Barq’s root beer does contain caffeine and there are around 22.5 milligrams of caffeine per 12-ounce can. However, Barq’s diet root beer is caffeine-free, so if you are willing to taste the authentic Barq’s flavor without the caffeine kick, then the diet variant is the right pick for you.

However, there are a few exceptions as well. For instance, both regular and diet versions are caffeine-free in a Coca-Cola Freestyle vending machine. However, corn syrup is used to prepare the regular version, whereas the diet version is prepared with aspartame (artificial sweetener).

Additionally, when you buy a regular Barq’s beer in Utah, it is caffeine-free. This is due to the higher Mormon population who completely avoids caffeinated drinks.

How Much Caffeine Is in Barq’s Root Beer?

The regular Barq’s root beer contains 22 milligrams of caffeine in a standard 12-ounce (355 milliliters) can, whereas the diet Barq drink contains none.

However, this isn’t considered a high-caffeine drink. Several other caffeinated beverages contain a higher caffeine amount. Moreover, for a healthy adult, up to 400 milligrams of caffeine consumption per day is considered safe.

The presence of caffeine in Barq’s root beer is not due to natural chemistry between the ingredients, but it is added separately as an ingredient. Since caffeine is tasteless, the taste isn’t the reason behind Barq’s adding caffeine separately to their beverage.

Caffeine is an addictive substance. The makers wanted to make this drink popular and addictive for beer drinkers. Thus, they added a small amount of caffeine to their recipe.

Reasonably, you shouldn’t worry much about the caffeine amounts in the original Barq’s Root Beers, as there are plenty of sodas and other beverages like tea and coffee that contain far higher caffeine amounts.

The caffeine amount from one can of Barq’s isn’t significant compared to the total caffeine amounts consumed in the diet throughout the day. Unless you are on a no or low caffeine regimen, there isn’t anything to worry about drinking 1-2 Barq’s cans in a day.

Barq’s Caffeine vs Other Popular Beverages

In comparison to other popular beverages, Barq’s Root Beer is considered to contain a low caffeine amount. Here is a quick table of comparison detailing the caffeine content of Barq’s versus other beverages.

Unlike other flat-tasting root beers, Barq’s has a bite. Let us find out the reasons.

It pours a nice dark brown color that is slightly transparent. A medium to tall head sits on the top before dissipating quickly. Carbonation is not so high, yet it is pleasantly bubbly.

Root beer is often classified as a soda drink. Therefore, comparing it with regular beer aroma is not justified. Still, Barq’s aroma is more lively and distinguished than other root beer. Furthermore, flavored versions have fruity-infused aromas.

Barq’s root beer has an amazing balance of flavor. Moreover, It is crisp and bold.  Apart from a kick of caffeine, its nice and smooth taste distinguishes it from other root beers available in the market.

A little caffeine doesn’t hinder the overall smoothness. It largely remains a mainstream root beer with an additional boost of caffeine. When served chilled, this crisp root beer becomes the best beverage for a hot sunny day.

The different ingredients that go into making the original Barq’s root beer are:

No, Barq’s root beer is not entirely healthy. The occasional consumption of the drink is acceptable, but you should not consume it more than a couple of times a week. This is because a lot of the ingredients that go into making an original Barq’s beer don’t make it a healthy option for you.

The different ingredients include: 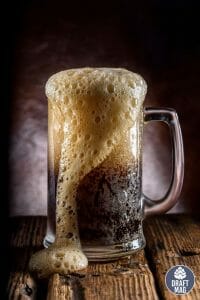 High-fructose corn syrup (HFCS)- This ingredient is very high in sugar. It could lead to weight gain, tooth decay, and other chronic conditions like diabetes.

Caffeine- The caffeine content makes it harder for you to sleep. It even stains teeth on regular consumption. If you consume coffee as well, this will lead to the accumulation of excessive caffeine in your body. This, in turn, makes you nervous and restless. In addition, you might need to make more bathroom trips and feel dehydrated.

Caramel- This ingredient gives the root beers their distinctive color. The caramel-coloring process has been listed in California’s list of cancer-causing agents.

What Is the Right Amount of Barq’s Root Beer?

However, beyond caffeine, several other considerations, such as sugar content, matter too.

For pregnant women, this limit is reduced to 300 milligrams (13 cans) of root beer in a day. However, the British National Health Service recommends expectant mothers limit it to around 200 milligrams (8 cans).

Most of the sugar content in the regular version derives from corn syrup. As it is very high in fructose, it lends a total of 44 grams of sugar to a can. This is about 89 percent of the total daily recommendations of added sugars in an individual’s diet. Drinking 17 cans of Barq’s Root Beer might not sound like a good choice!

However, the data revealed by the studies on caffeine amounts and its health impacts are complex, so it is pretty challenging to dictate a “safe” caffeine amount. While a certain caffeine level may not affect the heart, bone density, or behavior of an individual, blood pressure could be adversely affected.

The standard serving of 12 ounces of Barq’s drink contains 65 milligrams of sodium, 44 grams of total sugar, and 160 calories.  In addition, these drinks are usually naturally carbonated, and the resultant carbon dioxide levels are toxic to the yeasts. Thereby, all of this prevents the end product of Barq’s Root Beer from exceeding anywhere by 0.5 percent ABV.

The moment you decide to limit your sugar and caffeine intake, Barq’s Diet Root Beer is the right pick for you. This drink contains neither caffeine nor sugars. Instead, it is sweetened with aspartame.

However, aspartame does contain phenylalanine. While this is not a problem for most people, it could be troublesome for people with phenylketonuria, popularly known as PKU.

Higher doses of phenylalanine results in worsening anxiety or feelings of distress in individuals. Also, people with sleep disorders need to keep a check on the amount of beer they consume.

The roots of root beer date back to many centuries when the indigenous Americans used to prepare beverages using the sassafras roots. The pharmacist Charles Hines is known to have marketed the first root beer commercially. In the year 1875, he invented the first-ever sassafras-based drink and started selling it the very next year.

Being a teetotal himself, he dreamt of calling his popular invention “root tea.” Although being a canny operator, he knew that there were much more chances of selling this invention to the coal miners with the name of “root beer” than tea. Until then, there wasn’t any caffeine content in the root beers, but the moment Barq’s entered the world of root beers, everything changed.

While most observers believe that Barq’s Root Beer had its base in New Orleans, Biloxi is where it all got started. In 1898, Barq was invented by a native of New Orleans, Edward Charles Edmond Barq. He was a trained chemist who used to work on Louisiana sugar plantations in winter and spent his summers in Biloxi, Mississippi. There, he used to bottle artesian water and concoction-soda pop flavors.

In Biloxi, he devised his version of root beers. He used sarsaparilla roots to prepare his soft drink instead of the regular sassafras roots. Biloxi Artesian Bottling Works’ bottled the Barq’s Root Beer for the very first time and by the year 1906, the national distribution for the same began.

By 1937, there were around 62 bottling plants that had been established in 22 different states. In 1976, two businessmen, John Koerner and attorney John Oudt, bought the company from the Barq family and decided to move its headquarters from Biloxi to New Orleans. Later in 1995, the Coca-Cola Company bought the company’s title.

– Why Is Barq’s Root Beer So Popular?

Barq’s root beer is popular due to its uniqueness. Moreover, Barq’s root beer flavor is different from other root beers. All thanks to the use of sarsaparilla instead of sassafras, caffeine as an ingredient, and less sugar than other brands.

“DRINK BARQ’S. IT’S GOOD” is a slogan that has been with Barq’s since 1898. After more than a century, nothing has changed for this root beer. This root beer is known for its crispness and caffeine kick.

After ruling the root beer market for a century, the drink was ultimately acquired by Coca-Cola in 1995. The different slogans for this soft drink include “It’s Good”, “Famous Ole Tyme Root Beer since 1898”, and “Barq’s Has Bite”.

– Which Root Beers Have No Caffeine?

Brands such as A&W and Mug Root Beer do not contain caffeine. Generally, most of the root beers sold throughout North America are caffeine-free. While the ingredients could significantly vary depending on the product and brands, most of these beverages contain carbonated water, sugar, food coloring, and artificial flavors.

Some of the well-known root beer brands that are caffeine-free are:

Thus, if you are not up for the kick of caffeine in Barq’s root beer, you can choose any of the above drinks. 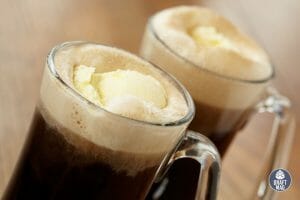 Until now, it is clear that Barq’s root beer does have a “bite,” aka caffeine. This guide touched on every aspect of this historical root beer and answered some frequently asked questions. Here are some key takeaways:

This no-alcohol, caffeinated root beer has been topping the charts for more than one century and there is a reason behind it. Grab one or two cans of Barq’s root beer to feel the “bite” yourself.