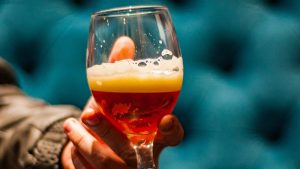 Words to describe beer are more elaborate than the simple and non-effective “good.” Some of them you might’ve heard others say include “creamy,” “balanced,” or “medium-bodied.” So, if you love beer but find it challenging to talk about, you’ve come to the right place.

Let’s break down the different ways by which you can talk about your favorite beer.

How To Describe a Beer Using Beer Tasting Notes: What To Look Out For

Tasting notes help you to keep tabs on a beer’s unique features. With this, you can never be lost for words when describing beer.

When evaluating a beer, you should consider the following talking points:

Bring the beer closer to your nose and take your time to perceive the beer aroma. Observe the beer’s aromatic qualities as close as you can. Then you can ponder on some questions, including:

Once you’re able to answer these questions, you’re on the verge of solving the aroma puzzle.

It is always acceptable to judge beer with regard to its appearance. How beers look will always matter as it often relates to their taste.

So, it would be best if you take note of the following:

These are fundamental questions to answer when describing the appearance of a beer.

The beer’s feel on the palate is also a vital point when describing it.

So, you need to be able to answer the following questions after craft beer tasting:

While you take note of the appearance, body, and beer aroma, you should not lose sight of its overall impression. Evaluate the entire beer and take notes on the impression you get.

The following questions will come in handy:

Now that you have these in mind, we can dive into the different beer flavor profiles.

In this section, we will break down seven of the major beer flavor profiles. This will help you learn various beer tasting terms based on descriptive words. The major categories are discussed below.

Beers you describe as crisp are those that are refreshing and clean on the palate. Their impact on the palate is delicate, and they may sometimes produce a dry feeling in the mouth.

This group of beers can be further classified into:

These lack the fruity and spicy aromatics popular with ales. They also show milder hops profiles than Pilsners.

Some notable styles under this group are:

This group of beers comes with a nice balance of malt and hops. The malt combines with smooth flavors that don’t linger on the palate.

Common styles in this group include:

These beers use Noble Hops, giving them a distinct and dryer hop bite in the finish. Their aromas can be floral, spicy, or herbal.

The styles that often have this tasting note are:

The beer flavor profiles for the beers in this group are dominated by malt-driven flavors. The palates have an excellent level of sweetness and malty notes of caramel, toast, nuts, and dark fruits. Let’s check out the words to describe them and their flavors:

While malt remains their sturdy backbone, beers described this way give brighter dried-fruit notes to the palate. The mild fruit aroma combines with caramelized flavors and notes of red apples and plums.

Styles available in this beer flavor include:

This is a combination created by mild crisp with full and bready malt flavors. Stronger beers in this range include a touch of roasted fruit and caramel.

The beer flavor profiles of these beers focus on dark roasted malts to contribute cocoa and coffee notes. The tasting notes meet a rich dark appearance and mouthfeel. The malt roast often comes out stronger than you will find in other beer flavors.

Dark, malty rich, and delicate bitterness, these beers tend not to show intense roasted qualities. However, they shift towards milk chocolate or coffee with cream flavor. 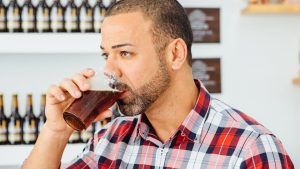 This is the driest and the most roasted-tasting you will find among dark beers. Dark chocolate, espresso, tar, and burnt grain are the dominant aromas here. The strongest version shave fruit flavors with an aroma of plums, prunes, raspberries, and cherries.

However, they are usually lighter on the palate, allowing you to feel the dry notes.

The following are some notable styles of dark and dry beers:

Describing beer with this flavor means that you are getting a bold fruit and spice beer aroma. Some of these beers may be sweet, dry, or semi-dry. However, they are not overly bitter. They usually have their ABV ranging from low to high and color from golden to dark brown.

Darker fruit qualities like raspberry, cherry, strawberry, prune, and fig come out in these beers. Notes of clove, pepper, nutmeg, and cinnamon give them that spicy aroma. Malt flavors are also present to strengthen the overall beer body with chocolate and caramel notes.

Let’s look at some types of beer that have this flavor profile:

Brighter fruit notes, on the other hand, come out like pear, lemon, tart apple, and banana. These are accompanied by a good mix with spices such as pepper, cloves, cinnamon, nutmeg, and vanilla.

Beers with this flavor profile show earthy, leather, funky, and winey notes. While some are light and acidic, others are darker, vinous, or extremely sour. Their colors range from straw to dark brown, and their alcohol content can range from low to pretty strong.

They are associated with lighter malts, gentle/mild acidity, and lighter bodies. All these combine to make these beers crisp and refreshing. The bright citrus (orange, lemon) notes leave the palate almost dry.

They are typically sour and funky, with some intense rustic notes. They have milder fruits notes common to peaches, grapes, and strawberries. The carbonation levels of these beers are usually higher, with refreshing quality on the palate:

These are the most wine-like among this class of beers. They have pronounced acidity with blends of fruity aromas of peach, cherry, plum, strawberry, and raspberry. 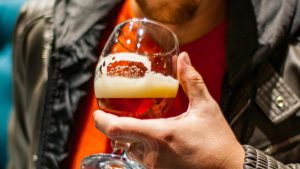 Describing beers should never be a daunting affair, since all you need to do is to look at them, smell them, and feel them. The various beer flavor profiles discussed above will simplify the description for you.

Here’s a summary of what you learned:

Keep this article close to revise the various essential points regarding ways to describe beer like a pro.