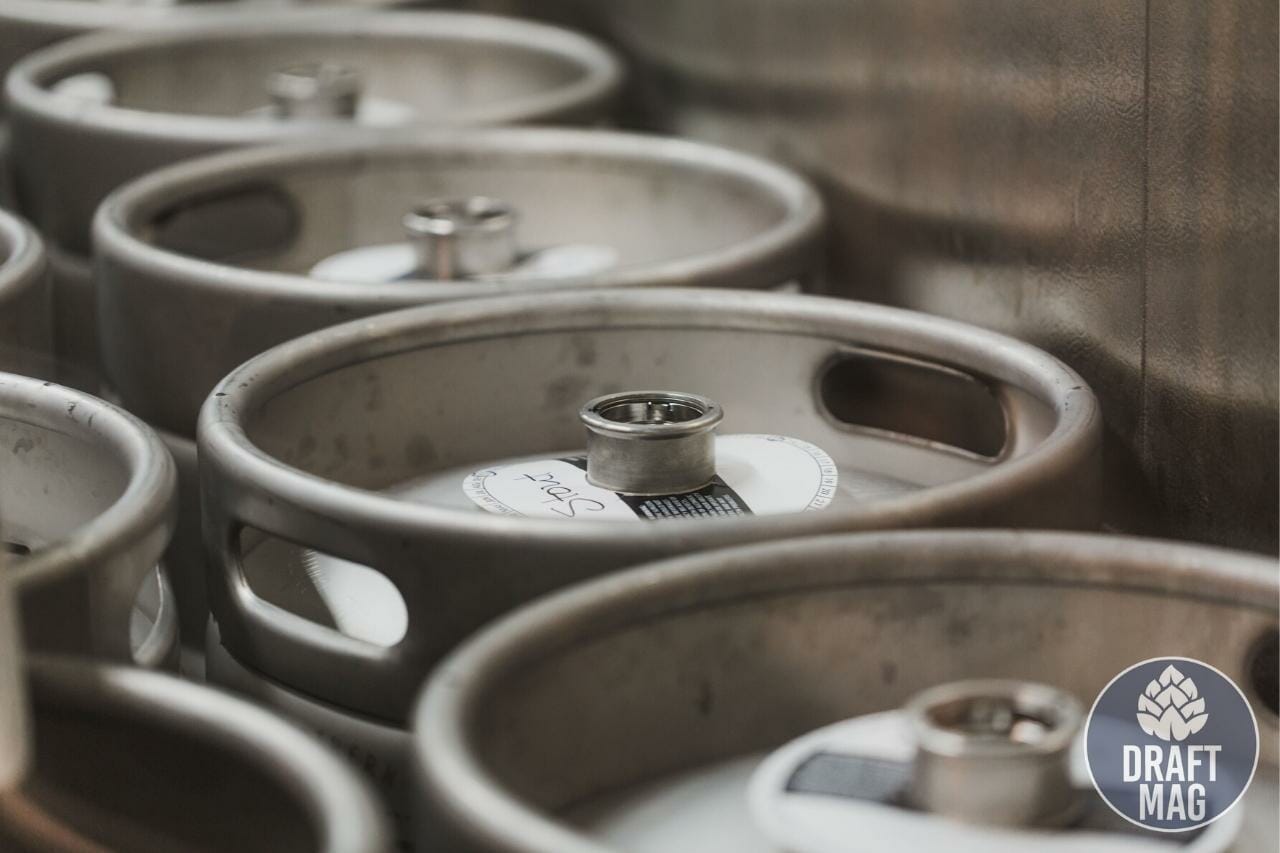 Knowing beer keg weight and the capacity of each keg is vital for keeping track of the inventory in your bar. This will help you know the number of kegs to order to ensure continued customer service.

This article gives an insight into various keg information, noting each keg’s weight and capacity.

What Is Keg Weight?

Keg weight refers to the different weight and capacity of beer kegs, and a full keg of beer weighs approximately 140 to 160 pounds.

What Are the Different Kinds of Beer Kegs?

The most common kegs used for beers today include the Cornelius, one-half barrel, one-fourth barrel, one-sixth barrel, etc. The kegs are often made of stainless steel, sometimes aluminum, coated with plastic on the inside. These two metals are lightweight but are the best materials for handling pressurized and carbonated liquids such as beer.

A typical half-barrel filled with beer is 160 pounds. The weight of a keg, either full or empty, depends solely on the different keg sizes and capacity.

The table below shows the different keg types, from the smallest to the biggest, indicating the weight when empty and full, respectively.

Now, let’s take a more detailed approach into these kegs, describing their features and providing other necessary information.

– What Is the Weight of a Cornelius Keg?

Cornelius kegs, commonly called corny kegs, weigh 9 pounds when empty and 55 pounds when filled with beer. Corny kegs are stainless steel canisters that formerly hold soda drinks in industries. They are the go-to options for kegging homebrews and other pressurized beverages like soda and sparkling water.

Most craft breweries use these kegs because they are cheap and easy to fill and clean. At the top of corny kegs is a large opening for filling fresh brew. These kegs have two forms of fitting setups: the pin lock and the ball lock. Either configuration has different kinds of connectors with an airtight seal.

– How Heavy Is a Sixth Barrel?

A sixth barrel keg weighs 15.5 pounds when empty and 58 pounds when filled. The sixth, or sixtel, is sometimes called the torpedo because of its similar figure. It is identical to the Cornelius in weight and capacity, though the sixth is larger and considered the industry standard.

The sixtel is probably the most popular option to keg beer in craft brewing. It is ideal for home brewing because of its small profile. Also, it is easy to transport and store in a kegerator. Most restaurants and bars like the size of this keg as they help to manage space. They get to have multiple taps serving variety to satisfy customers better.

– How Much Does a Pony Keg Weigh?

The pony weighs 22 pounds when empty and 87 pounds when filled. Ponies are a short, stubby version of a typical quarter keg. They have similar weights, albeit different dimensions. The keg design makes it easy to move around; you’ll often find these kegs at backyard gatherings or parties.

The kegs are not as common as quarter and half barrels as they are too short, making working with them quite inconvenient. For instance, when you put a pony in a keezer or kegerator, they soon take up all the space that would probably contain two to three slimmer kegs like the sixth, Cornelius or even a slim quarter keg.

– How Heavy Is a Quarter Keg?

The quarter keg has the same weight and capacity as the pony, so a full quarter keg weighs 87 pounds; however, it weighs 22 pounds when empty. Unlike the pony barrel, it is slim and, as a result, sometimes called a “slim” quarter keg. The keg is half the size of a half barrel, though that is a large capacity since a half barrel is a tank.

When planning a gathering amongst friends, this is an ideal size. They are more convenient to work with than half barrels. For instance, having two or more slim quarter kegs in an event, rather than a single half barrel, would create multiple outlets for collecting beer, thereby reducing the length of the queue. Also, it will allow you to serve more than one type of beer.

– How Much Does a Half Keg Weigh?

An empty half-barrel keg weighs 30 pounds and 160 pounds when full. Half Barrels are more or less a tank as they are very heavy, especially when filled. These vessels are perhaps the most common for storing beer. Half barrels are the typical barrel you’d find in bars, restaurants, parties and events in various hospitality industries.

These kegs are sometimes called the full-size keg as they are the largest available to most craft breweries. Taprooms and bars find these kegs cost-effective, as they can contain a large volume of brews for serving various customers. Instead of buying numerous smaller kegs, for example, a single half-barrel has more capacity than three corny kegs.

The 50-liter keg weighs 28 pounds when empty and 130 pounds when filled. It is quite similar to the half barrel in size, but it is a little smaller. That is, the kegs, when full, contain 102 pounds of beer. 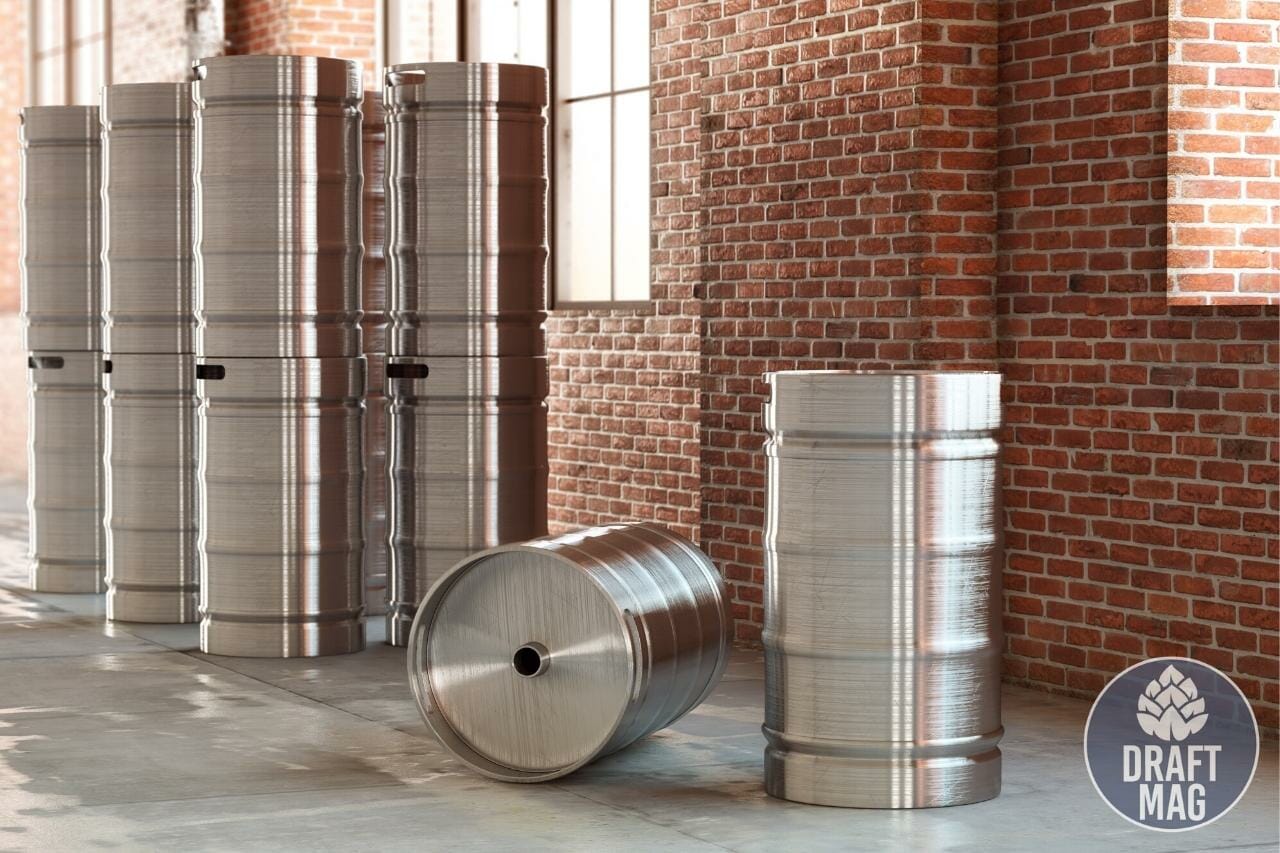 The 50-liter keg is uncommon in the US.

However, it is the most common keg type in Europe.

Often, when you import beer (kegs) from Europe, they do come in a 50-liter keg. It is the go-to kegging option over there.

The mini is another keg variant that is best suited for miniature kegerators. They are often for a one-time event, as they are primarily used as disposable kegs. Also, they are often for individual beers. Henieken and Coors lager are examples of beers that use this keg.

The disadvantage of this keg is the difficulty of finding one with the specific beer you want. However, they are a good option for spending time with a couple of friends on a small get-together or a camping trip.

How Many Servings of Beer Are in a Keg?

Like the question on the weight of kegs, keg sizing also isn’t a direct answer question as Keg size information depends on the individual kegs. For example, a corny beer can hold five gallons of beer, whereas that of a half barrel would be at least three times that. Let’s examine the amount of beer each keg can hold.

– How Much Beer in My Corny Keg?

As earlier stated, a corny keg can hold 5 gallons of beer. To better put that into perspective, let’s answer the question: how many beers are in a corny keg? Most beer cans and bottles come in either 12 or 16 ounces.

That said, a corny keg can hold 40 16-ounce cans or 53 12-ounce bottles of beer. The keg’s dimension is 23 inches by 9 inches, which further suggests that it’s a slim keg that easily fits into a kegerator.

– How Much Beer Can a Sixth-barrel Keg Hold?

This keg is just a little bigger than the Cornelius, so it can hold 5.16 gallons of beer. Likewise, the number of 12-ounce and 16-ounce beers it can contain are quite similar to those of the corny. A sixth keg would hold 41 16-ounce pints and 55 12-ounce bottles or cans.

The keg’s dimensions are similar, though the sixth keg is a little bigger. It measures 23.375 inches by 9.250 inches.

Remember, we earlier said the pony keg and quarter kegs are similar, with the only difference being that the quarter keg is slim while the pony is short and stubby. Hence, even though they have the same capacity, the dimensions, of course, are different. That said, a quarter keg measures 23.375 inches by 11.175 inches.

– How Much Beer Can a Half Barrel Hold?

Half barrel’s capacity triples that of a sixth and doubles a quarter, which means it can hold beer of up to 15.5 gallons. A half keg is more or less a combination of three sixth kegs or two-quarter kegs.

The full keg will contain 165 12-ounce bottles or cans or 124 16oz pints of beer. This tells you the large capacity of this tank. The three (sixth, quarter and half barrels) have the same height, 23.375 inches. The capacity of a half keg weight is a measure of its increased width at 16.175 inches.

The miniature keg has a capacity of barely 1.32 gallons. They are pretty small. The beer content is even less than one-tenth that of a full-sized keg (half a barrel). The dimensions of this disposable keg are usually around 9.875 inches by 6.75 inches.

How To Weigh Kegs for Bar Inventory?

Beer kegs are usually weighed with the aid of a keg scale. Taking the weights of kegs of beer is the most precise method of taking the inventory of kegs in a bar.

To count kegs in stock using a scale, below are five steps to follow.

This step is straightforward. Weigh the full keg using your scale and record the weight. The knowledge of such a keg’s full weight would help make comparisons with its weight when partially filled.

The weight of a keg containing beer or any other liquid is the combined weight of the keg and its beer. To know the exact keg weight, you will need to weigh an empty keg. That way, even when the keg is full or partially filled, you can account for the weight of its content.

A simple subtraction of the empty keg’s weight from the total weight when filled with beer, would give the weight of the beer it contains. For instance, you weigh an empty keg to be 25 pounds. After filling with beer, it weighs 100 pounds. From this, we can infer that the weight of beer in the keg is 75 pounds.

Using our illustration, say the weight of the filled keg is 125 pounds. That means the weight of beer the keg contains when full is: (125 – 25), which will result in 100 pounds. Therefore, the percentage of beer remaining in the keg will be 75 ÷ 100, which is equal to 75 percent. This means that our keg is 75 percent filled.

Now you have all the records obtained for the amount of each product available in your bar. The next thing is to log in all the inventories to a more sophisticated record system. You can do this on a spreadsheet or whatever software you use for your bar.

It is always essential to keep records of the inventory in the bar from time to time. 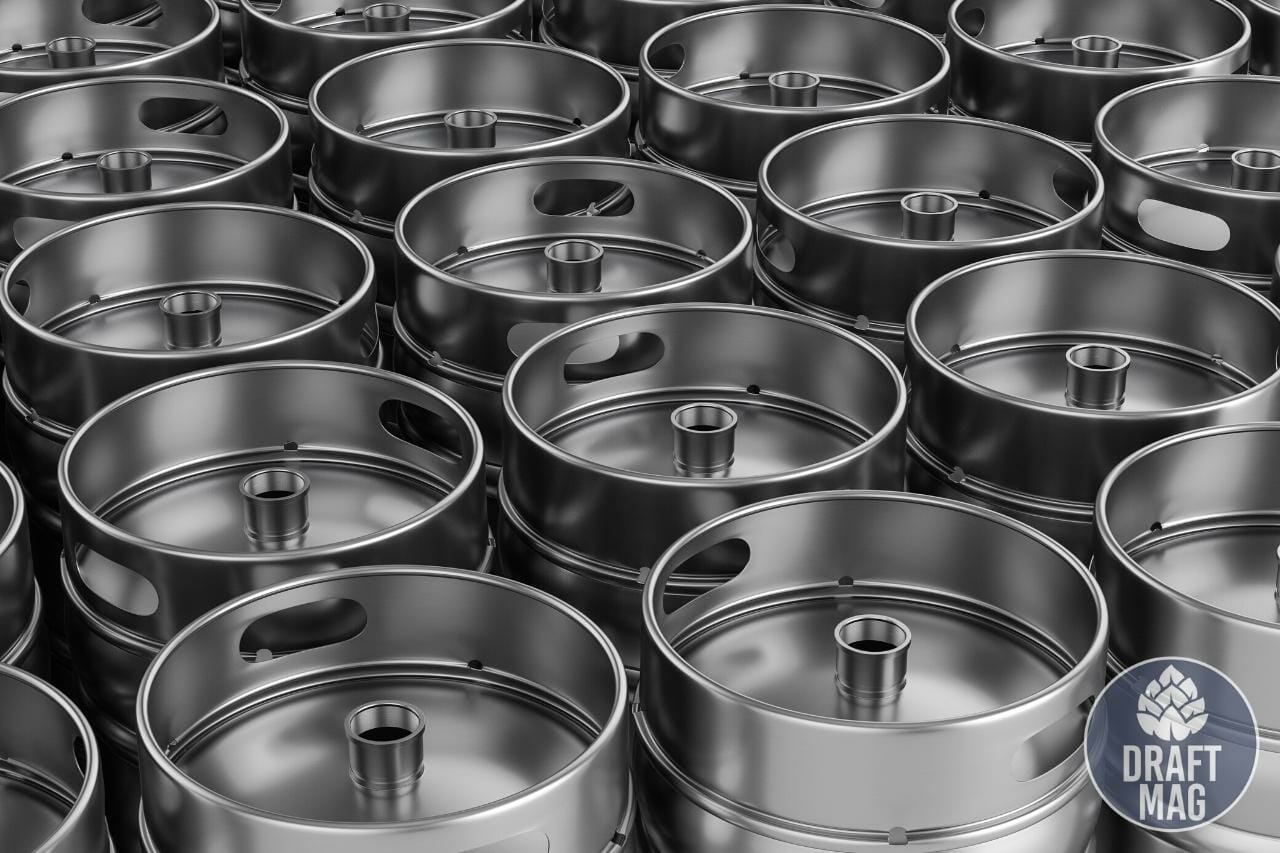 This article gave you detailed information on keg and beer weight and other size information. With that being said, let’s summarize all that the article entails.

If you need information on the weight and sizes of the different kegs for storing beer, then this article is just what you need.

Take your time to go through it carefully!