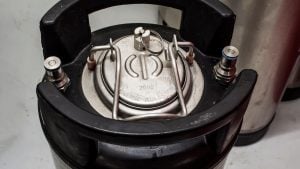 This ball lock vs pin lock comparison guide will give you the details to help you choose the right homebrew keg locks. Corny kegs are among the most popular and most accessible kegs for homebrewers.

We will take an in-depth look at the differences and similarities between pin lock and ball lock kegs to help you decide the one that is best for you.

Here is a quick overview table of their similarities and differences.

Ball Lock vs Pin Lock Kegs: What Are Their Main Differences?

The main differences between Ball Lock and Pin Lock keg systems are in their sizes and dimensions as well as how they work. We’ll focus on the 5-gallon kegs because they are the most widely used size. However, both kegs come in various sizes including 10, 5, 3, 2.5 and 1.75 gallons.

Ball lock keg height is thinner and taller, while pin lock kegs are broader and shorter.

You don’t want to choose a keg that’s bigger than your keg storage space, so you should consider this vital difference.

Another major difference is the pressure relief valve present on the lid of the ball lock kegs. On the other hand, pin lock kegs require the user to press down the keg post gas connection center for depressurization. While this is often not a problem, many homebrewers consider it too challenging.

In addition, the “gas-in” and “liquid-out” fittings on pin lock systems are different. A pin lock keg uses two- and three-pin port connectors. The two pins are for the “gas-in” port, while the three pins are for the “liquid-out” port. These pins fit into gas line slots and liquid line connectors and intend to prevent the bubbling up of gas through the beer without dispensation.

Pin lock Corny kegs are designed in such a way that you can easily convert them to ball lock kegs. However, their parts are less widely available than ball lock parts, so you need to consider this difference when you’re looking to invest in a keg system. Moreover, ball lock kegs use rings of balls for secure connections, while pin lock connectors have the “tongue and groove” kind of setup.

Their internals are nearly identical. Both pin and ball lock kegs have side and center pick-up tubes, but this should not influence your decision because they perform similarly.

Pin Lock vs Ball Lock Keg Systems: How They Work

CO2 gas flows through the “gas-in” outlet, putting pressure on top of the keg. The liquid is forced out of the “liquid-out” outlet by this pressure provided directly to it.

The fittings on the keg’s top in the ball-lock system are slightly different from one another, but unless you take a very close look at the two options, it’s difficult to discern the difference between them. You can only use matching gas fitting with the “gas-in” fitting, not a liquid line fitting.

If you disassemble your keg to clean it, the port fittings may appear the same, which can be confusing. You can have difficulties distributing your beer if you install the wrong fittings on the wrong sides. This is the fundamental argument against ball-lock fittings, but the issue can be easily avoided if you understand the differences between the two fittings that appear identical. 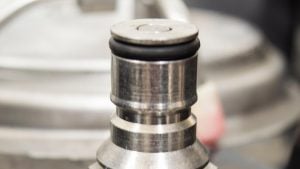 Generally, both pin and ball lock lids have equal dimensions, and they are interchangeable. Therefore, you can make use of the pin lock lid on a ball lock keg and the other way around. The major difference here is the function of the pressure relief valve (PRV). Whenever there is too much pressure, both lids automatically vent.

The pull ring available on ball lock keg lids allows for manual venting of the keg, so you can do it either to release excess pressure or aim to remove the lid of the keg. This is the advantage of having manual PRV valves. There is a need to press the keg post gas connection for pin lock lids to release pressure.

A less common lid style is the racetrack style. However, you cannot interchange it with regular lids.

There is a standard pin lock post size available, which is 13/16 inches. These posts always require the use of special notched sockets.

On the other hand, standard ball lock posts have two primary sizes — 7/8-inch and 11/16-inch posts. These posts are compatible with both 6-point and 12-point sockets. Other rare sizes include 5/8 inches and 9/16 inches, which are preferably called non-standard variants.

The pin locks quick disconnects, on the other hand, use notches to keep them locked in place on the pins present on each post. A glance at the QDs, and you’d notice that the ball lock QDs are quite shorter than pin lock QDs.

Generally, you also have the choice of two tubing connections — Male Flare Connections (MFL) and Barbed, both of which measure ¼ inches. The MFL connections are excellent choices because they allow you to remove the tubing easily. However, some homebrewers prefer barbed connections when it comes to gas lines.

A shorter QD profile will be an excellent option if you had a pin lock keg and the total height seems to be a concern. The two quick disconnects systems have similar general components, which include O-rings, screw-on caps, spring, body and stem.

Ball Lock vs Pin Lock O-Rings: Are They the Same?

Can You Convert Pin Lock to Ball Lock?

As we mentioned earlier, interchanging ball lock and pin lock is possible. However, it is much easier to convert pin lock to ball lock kegs. The CornyKeg conversion kit allows you to easily convert your pin lock kegs to a ball lock keg.

You have to first settle on a keg system you wish to use. The ball lock style is often readily available, and most homebrewers choose it. In addition, most kegerator conversion kits often also come with ball lock connections, so these are usually the obvious choices.

What Are Corny Kegs?

As a result of the soda industry’s decision, many kegs that were in circulation were offered to homebrewers to help keg their beer instead. These kegs are ideal for homebrewing since they can withstand pressures far more significant than what beer requires.

In addition, they are made of stainless steel and are relatively inexpensive. With all that being said, they are virtually found everywhere now.

Historically, there has always been a two-way division of Corny kegs. For example, Coca-Cola employed pin locks with a fuse-style valve for pressure relief. On the other hand, Pepsi and other soft drinks manufacturers utilized ball locks in the past.

Ball Lock vs Pin Lock Keg Systems: Which One to Choose

Most homebrewers find it hard to pick between these keg systems, and they will often say neither one is better than the other. Ball lock and pin lock kegs are very similar, with both having liquid and gas dip tubes. They will ensure your beer remains carbonated, saving you from the stress of bottling. With these Corny kegs, your brew cave tends to look more legitimate.

However, there may be reasons to choose one style over the other. One of these reasons is the ease of finding or replacing the keg parts. Most kegs available in the market today have a ball lock system. Moreover, most traditional brewing equipment are designed for ball locks. Thus, it is much easier to find their parts.

Pin lock kegs would also be great because they allow you to differentiate between connection posts — three pins for “liquid out” fittings and two pins for “gas-in” fittings. Unfortunately, ball locks may also be relatively more expensive than pub locks.

Another important factor you should consider is the space available in your keezer or kegerator. If you have space for the wider ball lock keg, then it should be the obvious choice. However, if you need space for more homebrew tools, the pin lock keg may be the best fit.

Finally, fitting pin lock kegs after cleaning is a bit easier than with the ball lock counterpart. The decision of choosing ball lock or pin lock kegs for most homebrewers is often highly influenced by the cost, ease of finding, and available parts. The most practical consideration is usually what system they find first when bargaining. 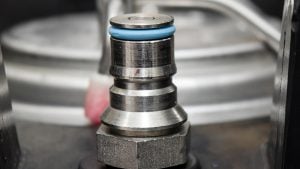 Ball lock and pin lock Corny kegs provide homebrewers with top options for their brew. However, choosing between these keg types may be a daunting task. We have done all the work for you and presented you with the essential details of these keg systems.

The information in this article will help you make informed decisions when choosing a keg system for your homebrew.