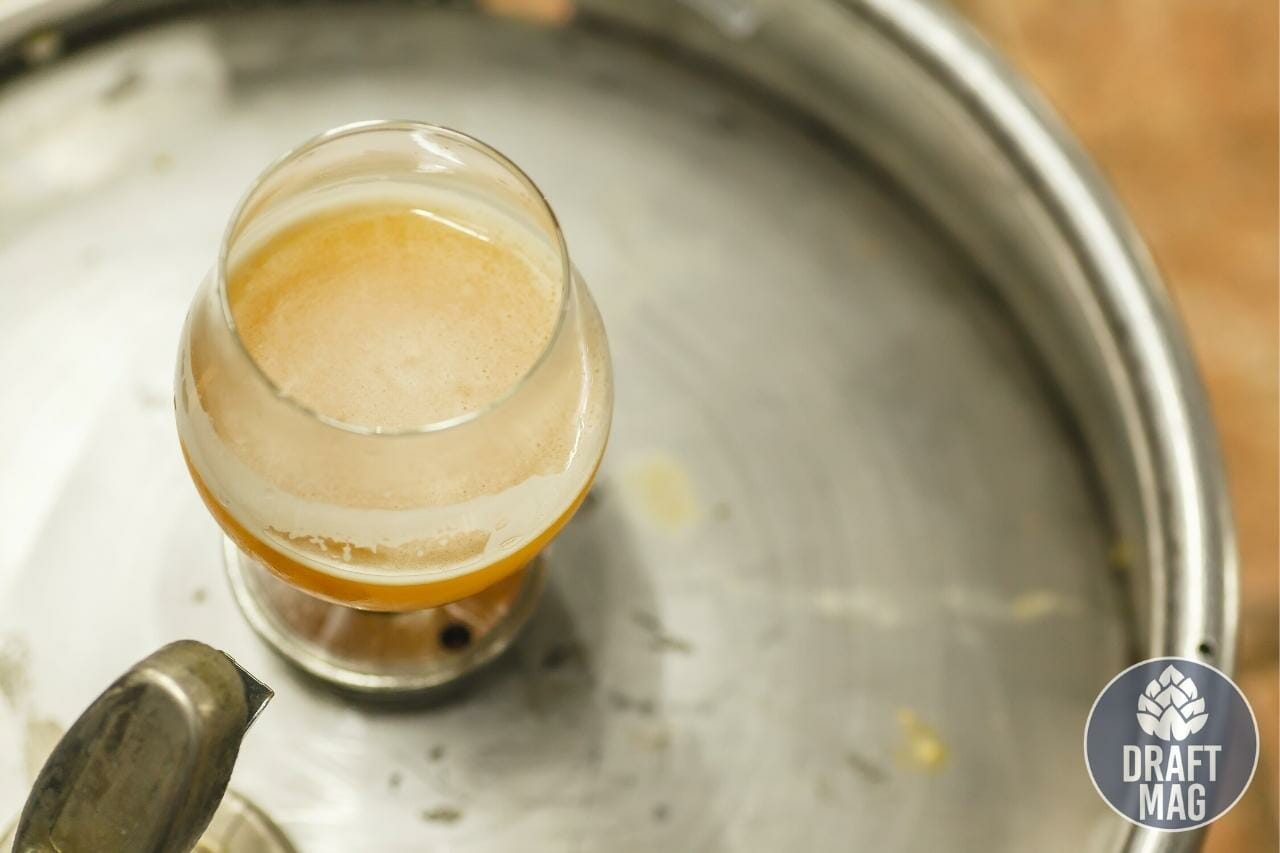 A Foamy keg is not what you want to see while pouring pints in a glass because the pour from the kegerator should be foam-free as pouring pint is an art — and the same should be done in the right way every time.

Naturally, a few pints from a newly installed keg is foamy, but if the issue persists, it’s a sign to troubleshoot.

It would be best to investigate the possible pitfalls to ultimately solve this issue. In this article, we’ll be guiding you through all the possible reasons this is happening to your brew, as well as what you can do to prevent it.

Why Is My Keg So Foamy

Over-carbonation, incorrect temperatures, and dirty beer lines are some reasons why the resulting brew from a keg becomes foamy.

Most kegerator crises have a typical problem related to foamy beer coming out of keg. This malfunctioning can be frustrating when you pour pint after pint of foam, and annoyingly all goes down the drain at the end. In this section, we have listed down the most common causes of experiencing foamy beer.

All beers are carbonated to a certain extent. You may love a high-carbonated beer for its fizziness, but over-carbonation has many drawbacks. Carbonation is nothing but the amount of CO2 present in the liquid, which is a result of yeast fermentation during the beer-making process.

This is often referred to as a by-product or the fifth ingredient in beer after malt, hops, water and yeast that can change the flavor and appearance of the drink.

An over-carbonated keg means the liquid solution is saturated with a large amount of CO2 gas. This means more gas is absorbed in the mixture at cooler temperatures. All commercial kegs are mostly over-carbonated, and the reasons may vary. It can either be a mistake on the brewery’s part or a result of variation in temperature during transportation and storage.

Over carbonation inside a keg may also occur if your homebrew keg is sitting at too high pressure for too long. When the temperature rises above a certain level (say about 40 F), the CO2 gas starts to escape from the pint.

An over-carbonated keg can also be detected if there is an unexpected bitter taste in your pint or if there are tiny bubbles visible in the keg lines.

If you don’t have an accurate idea of the temperature (the beer liquid solution holds itself best around 34-38 degrees) and the right CO2 pressure inside your kegerator, it will lead to over carbonation.

Most problems related to keg malfunction and its resultant foamy beer are due to incorrect temperature maintenance. In general, beer will foam when served too cold or usually more if it’s too warm. Thus, striking an ideal temperature is important for the perfect pint of beer.

If you are serving beer too warm (the keg is very warm), foam builds up throughout the pour. This means more CO2 is knocked out of the solution.

The problem mainly occurs when the beer leaves the refrigerated area and sits in the line. It warms up to room temperature in the tower, so by the time it pours out of the faucet, carbon dioxide has already expanded.

It is crucial to check the temperature of the liquid at both the top and the bottom of your kegerator. Both the draft tower line and the keg compartment should have cool air circulation and a close to consistent temperature (38 F) between them.

Applied pressure is what you set on your CO2 regulator during normal operation. It is also called serving pressure (the pressure at which a fully carbonated pint is poured at the perfect rate). If this serving pressure is higher than the restriction value (of the beer line), the bartender can experience foamy beer.

Ideally, the applied pressure is about 10-12psi. A CO2 regulator with an adjustable knob can be used for making adjustments to maintain the carbonation level for different styles.

Having a clean and clear beer line (connectors between the keg-disconnects and the faucet) is vital to maintaining good flowing beer. If your beer lines are dirty, you can get foam in your glass while pouring.

Dirty beer lines result from improper cleaning, condition pipes and fitting, build-up of pathogens and other microbes, or presence of yeast-based sediments and beer stones. A regular check-up of all beer lines is essential. Old and worn-out fittings should be replaced periodically.

Loose fittings can cause infusion of air into the solution, resulting in air bubbles and foaminess. It is recommended to use a standard beer line that matches the applied pressure from the CO2 regulator and the restriction value from the beer line to maximize the keg yield.

The beer line is a crucial part of the draft system. It carries the beer from the keg coupler to the keg’s faucet. Using an ideal beer line length that finds a nice balance and resistance with the whole keg system is recommended. It should be flexible enough to allow you to adjust to the pressure when required.

The standard length of your beer line should not be beyond six to seven feet. Variations are possible depending on the style of beer and your draft system.

A standard draft beer line is about 4 inches in length and with an RV (restriction value) of 3 lbs per foot.

This means the line will allow the clear beer to pour at 2 oz per second. Wrong beer lines (especially the inner diameter of draft lines if it’s too little) may cause slow pouring, leading to too much foam in keg.

It is not possible to enjoy the real taste of the beer if the keg pours it too foamy. The quality of your pour can also be defined by the quality of faucets you use. Faucets that can easily be disassembled and cleaned should be used.

In addition, check for any worn-out O-rings on the dip tube. Damaged O-rings or missing probe washers will lead to foam every time. Even a damaged seal can force bubbles to appear in the beer line, rising from the keg. These small parts play a huge role in determining the quality of beer flowing out of your kegregator.

Having a beer on tap at home is fantastic; it’s less work and saves time. However, whether you are an expert or naïve to kegging your homebrew, you will run into a few kegerator problems. Apart from the reasons mentioned above, there can be other reasons leading to a foamy keg, which are listed below:

How To Get Foam Out of Keg

Checking the temperature, applying the proper pressure, and inspecting the draft beer line and fittings are some effective ways to get foam out of a keg.

After discussing all possible pitfalls of foamy kegs, the next question is how to reduce beer foam in a keg. The most critical factors need to be reconsidered: wrong serving temperature, wrong CO2 pressure, carbonation, quality faucets and beer line. Our target is to ensure that all of these characteristics are in harmony. Remember, an unbalanced system can lead to foamy pours.

Tips for reducing/getting the foam out of the kegerator include:

Try to check the liquid temperature, not the air temperature. The keg’s temperature should be less than 40 F. You can consider installing an insulating tower wrap or a draft tower fan to increase the circulation of cold air within the refrigerator or box holding the keg to stabilize the temperature inside. Avoid serving your pint too cold or too warm.

Check your CO2 regulator settings and try to set your adjustable gas regulator in the standard range of 5-12 PSI. However, it is also crucial to adjust the pressure range as per the length of your beer lines, the line resistance, and gravity (vertical rise/ fall of your draft system).

Also, keep in mind that different styles of lagers require different applied pressure. Thus, adjustments need to be done considering this factor too. Avoid high pressures and high temperatures as both will result in a foamy pour.

Some online calculators will help you determine the correct pressure with regard to length and corresponding temperature. If you are installing a new and full keg of beer, give the keg a rest for 24 hours. Transporting the keg releases some of the absorbed CO2 into the headspace. This gives the keg time so that the CO2 gets reabsorbed into the beer.

After checking out the temperature and pressure, inspecting the draft beer lines is the next thing you need to do. Check out blockages, clogging, worn-out fittings, missing probe washers, etc.

Go for a thorough cleansing routine to remove any debris. If needed, replace the damaged fittings altogether. Get a proper and accurate beer line that fits your beer style. For example, a light lager requires about a 7 feet beer line, whereas a mid-level darker beer style should be 6-8 feet in length and 3/16″ diameter.

One should know how to pour a pint of kegged homebrew properly. For a clean pouring, use clean glassware:

Finally, make sure that the keg has not been agitated (moved) just before being used. A shaken keg may lead to foamy beer. Always use fresh beer in the keg to get the perfect pint. 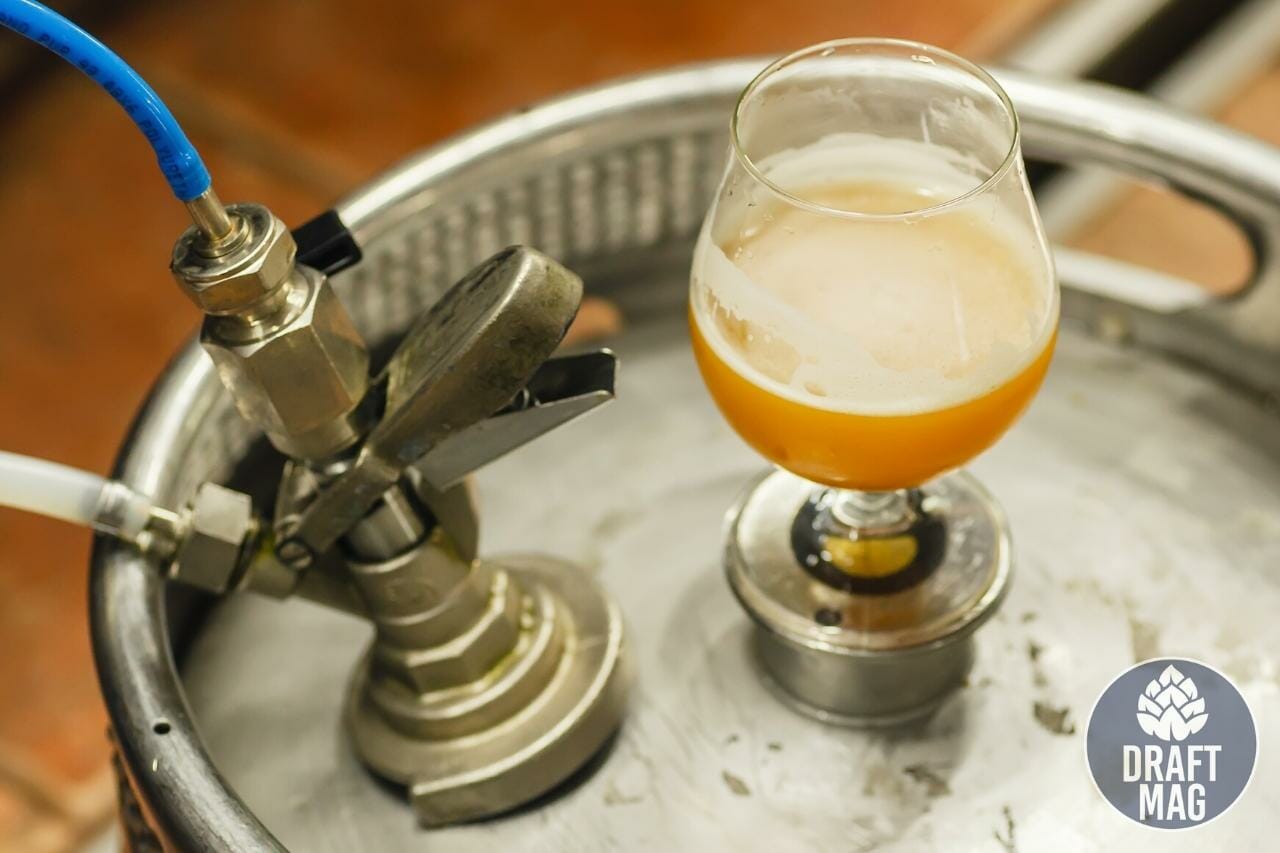 Serving beer from a keg is an age-old tradition. However, there will be some technical issues that will crop up now and then, and one of the most common ones is the foamy beer problem.

Now that you know everything about kegs and their associated tech problems, you must be able to defoam a keg without any doubts. So just look for the right amount of creamy and foam formulation, and the easiest way to do it is to keep your draft beer system updated and learn the art of pouring!