If you’ve ever asked yourself “Why are beer bottles brown or green?” then you should know that these specific colors help retain the original taste of the beers, according to brewers.

These beer bottle colors also help make their contents (the beer) enjoyable for a longer period of time and keep the taste almost the same as when it is first produced. 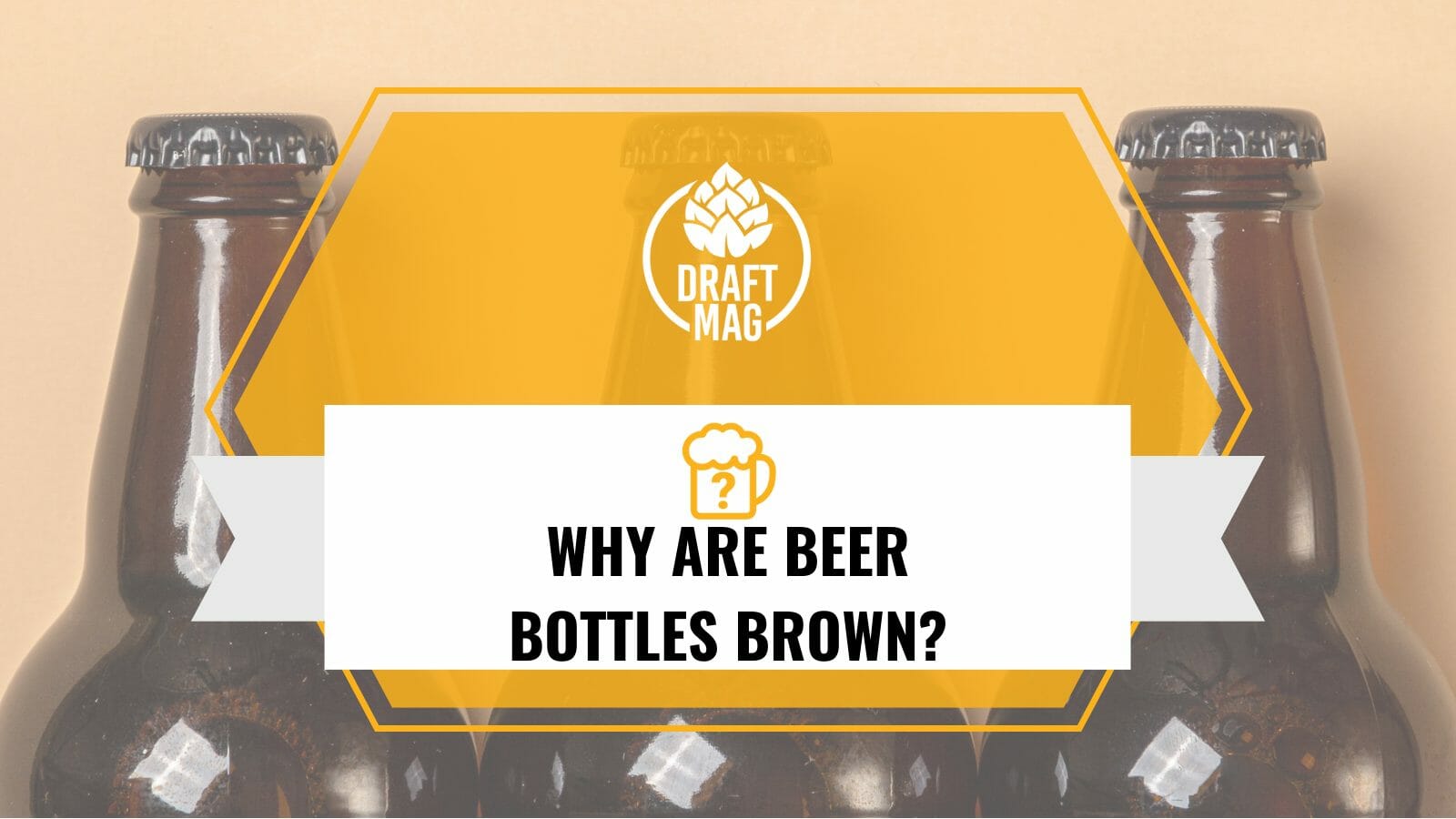 There are many other reasons for these specific colors, some of which might come as a surprise. If you are interested in learning about the reasons and history of beer bottle colors, continue reading as we discuss about it in the following guide.

Why Are All Beer Bottles Brown or Green?

Beers stored in transparent or light-colored bottles tend to become skunky and fall flat faster, so the two colors, brown and green, are popular choices because they help retain the original taste and quality of the beer.

This also gives the beer more time to fall flat, and the beer’s storage capacity and general shelf life increases considerably. Non-colored bottles absorb more light than colored ones. When beer or any alcohol comes in direct contact with any kind of strong light, their tastes deplete and their punch is reduced.

Beers are one of the cheapest alcoholic beverages globally, but have you ever wondered why their bottles are always brown or green? Why do brands always opt for these two colors in most cases?

Previously, when beer was not commercially produced or sold, most brewers did not know the science behind the colored bottles and hence packed beer in all kinds of glass bottles. With better scientific advancement and mass-scale production of beer, colored bottles gained more importance and worldwide acceptance.

The colored bottles stop light of any kind from penetrating the beverage, affecting the beers inside, and they help maintain the original flavors.

The color of beer bottles does not particularly mean anything. However, science has a few implications for bottle color. 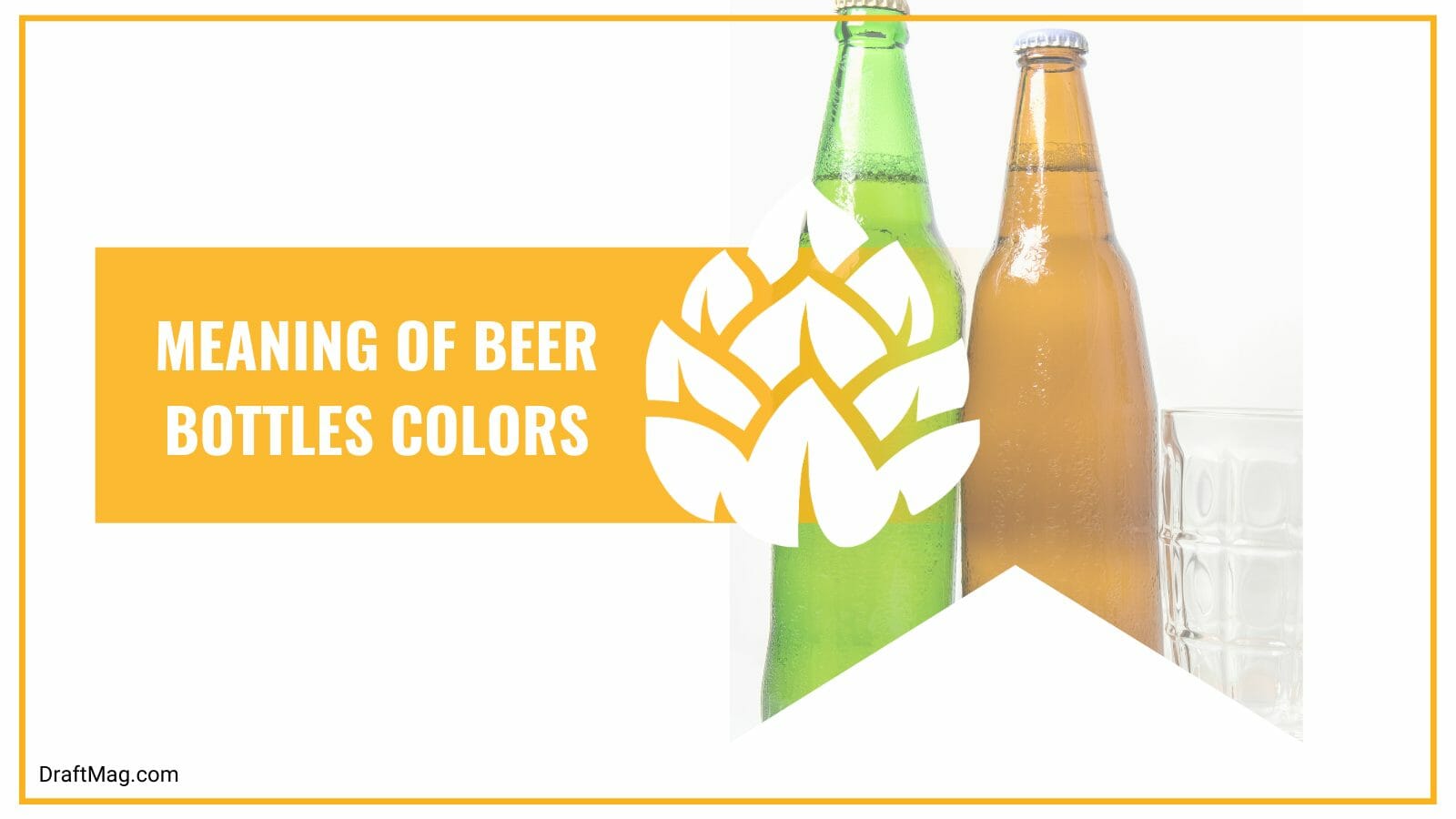 The color influences the beer’s taste, aroma, and flavor profile. It is said that brown-colored bottles are the best for beers because they retain the maximum level of the brew’s original characteristics.

– What Led to the Change in Color of Beer Bottles

Before the commercial production of beer started, beer was mostly stored and shared in kegs. After that, when people started using hops in beers, they realized that these alcoholic beverages could be stored, hence starting the usage of glass bottles for beer storage.

This was done as people thought the glass was the most non-reactive material and helped keep the beer fresher than any other substances and material containers. But later, scientists and beer experts realized that when the hops in the beer come in contact with strong light, a photooxidation reaction takes place. Be it sunlight or strong light from lamps or bulbs, the reaction with hops is very similar.

This leads to new compounds in the beer, namely, the 3-methyl-2-butene-1-thiol. The generation of this new compound is what makes beer flat and skunky, and the taste becomes undesirable. The UV rays in light also destroyed the hop-derived acids present in the beer, which initiated this change in the color of the bottles.

This led beer brewers and scientists to experiment with beer bottle colors to help stop the light’s reaction with hops and prolong beer shelf life. These days, you can hardly find any beer in clear transparent bottles. Though many beer lovers might not find brown bottles very attractive, it has scientific and historical reasons behind them. 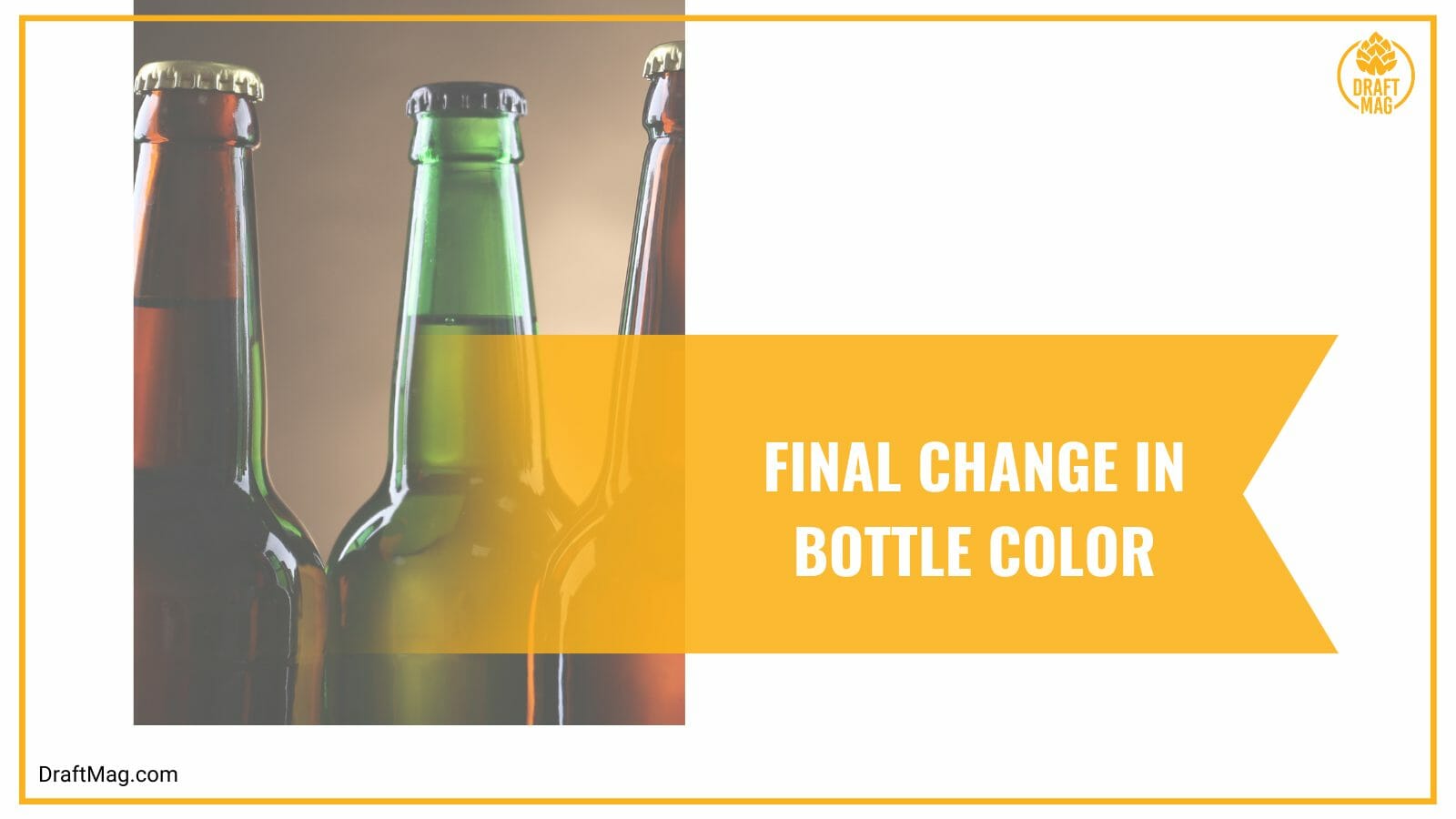 The color change was not a whimsical decision; it came after a long process of research and discovery. That is why, even though many craft beer bottles come in blue or some yellowish bottles, most of them are predominantly still brown.

Another major reason why brewers and scientists altered the color of beer bottles is that beer is mostly considered a summer drink, and it naturally comes in contact with the sun during these times. Most beers are generally drunk on sea beaches and outdoors, as is the basic tradition and idea of beer.

To make the beer-drinking experience more pleasant for beer lovers, the color of the glass had to be changed to help retain the original taste.

Before the discovery and mass-scale production of light stable hops, brewers had no other quick fix for the light contact issue with beer. After a lot of research, brewers realized that brown bottles have maximum resistance to light and minimize the negative effects.

They realized that only brown bottles could shield the beer from UV rays and stop the hops from reacting with the light. To date, brown bottles are the most popularly used color of beer bottles and are still favored by most beer companies.

The first production of colored beer bottles was always brown because of their high protection from UV rays. Then why did the shift happen to green beer bottles?

During World War II, most brewers could not get their hands on brown bottles due to low production and lack of supply. This led to many brewers starting their own production of colored beer bottles. The primary glass available during this time was green. Hence, they hardly had any other choice but to start beer production with that. 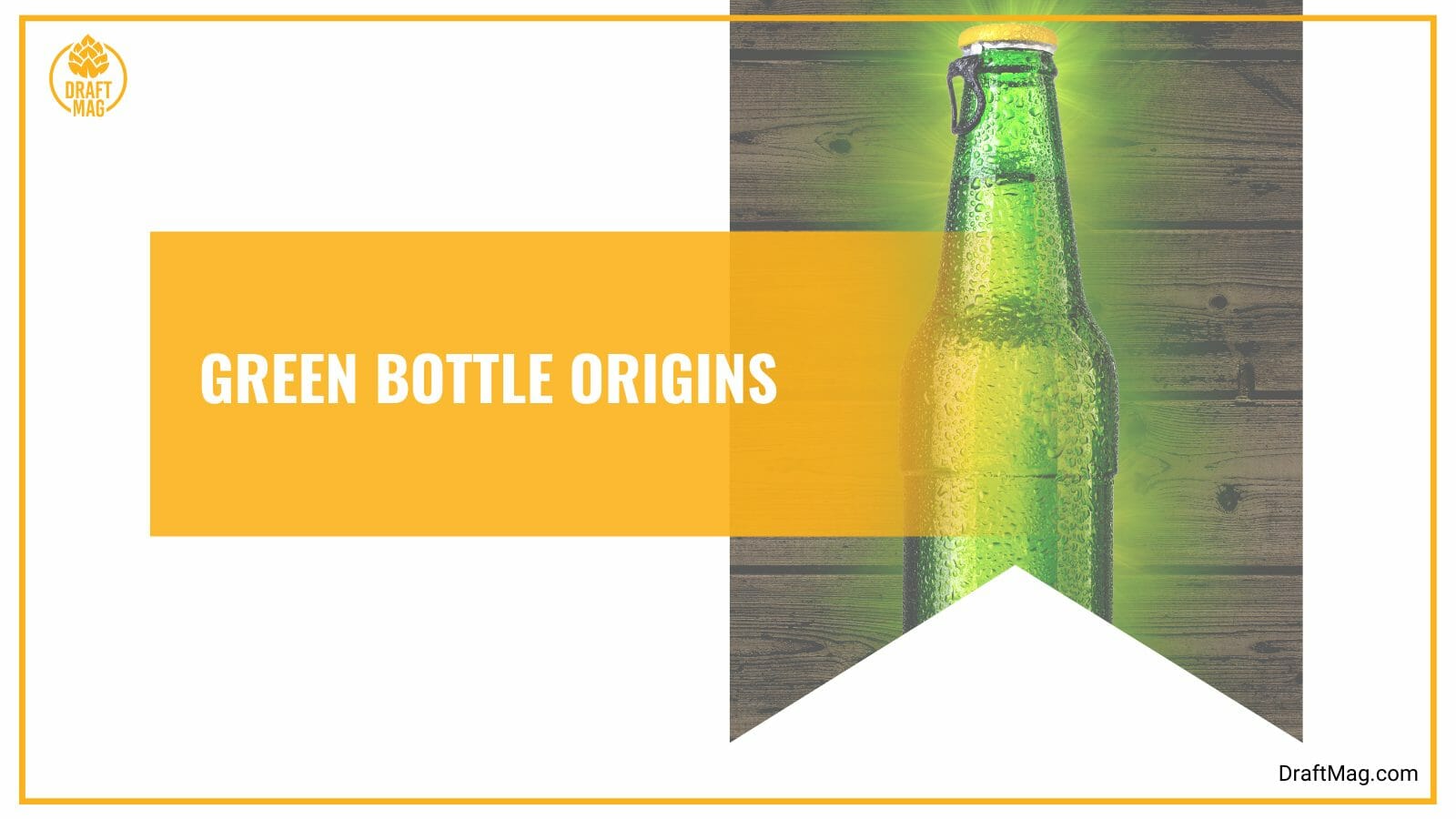 But there was a major drawback to this green bottle. It did not protect the beer from light as efficiently as the brown bottles, but with time, beer producers and marketers started to bottle their highest quality beers in green bottles, helping people identify and categorize beers according to standards.

After a few years, the color of the beer bottle became a class and quality meter and determined the status of the beer in the beer market.

At present, these classes and quality of beer are no longer associated with the color of the bottles, but some companies like Heineken still use them for their own branding. To date, the popularity of green beer bottles is primarily stabilized in the market by marketing and advertising brands.

Also, when you open the beer and keep it uncovered, its carbonation effects start coming in contact with the air around, and the fizz is reduced. Both factors together result in the beer falling flat.

But with the advancement of science and further development of the beer brewing industry, researchers have genetically modified and created new hop varieties. These new hop varieties are light stable, and their compounds do not readily react with light when in contact. This helps them prevent chemical reactions and helps retain the original taste for longer.

That is probably why some brands like Miller and Corona use white or transparent bottles to bottle and sell their beer these days. The recent developments and widespread manufacturing of these hops have led to a clear advantage for the beer brewing industry.

Do Other Beer Bottle Colors Affect the Taste of Beer?

Yes; when the beer is stored in transparent or white bottles of glass, it comes in contact with light and the UV rays react with the hops present in the beer, resulting in a flavor and smell that is “skunky.” 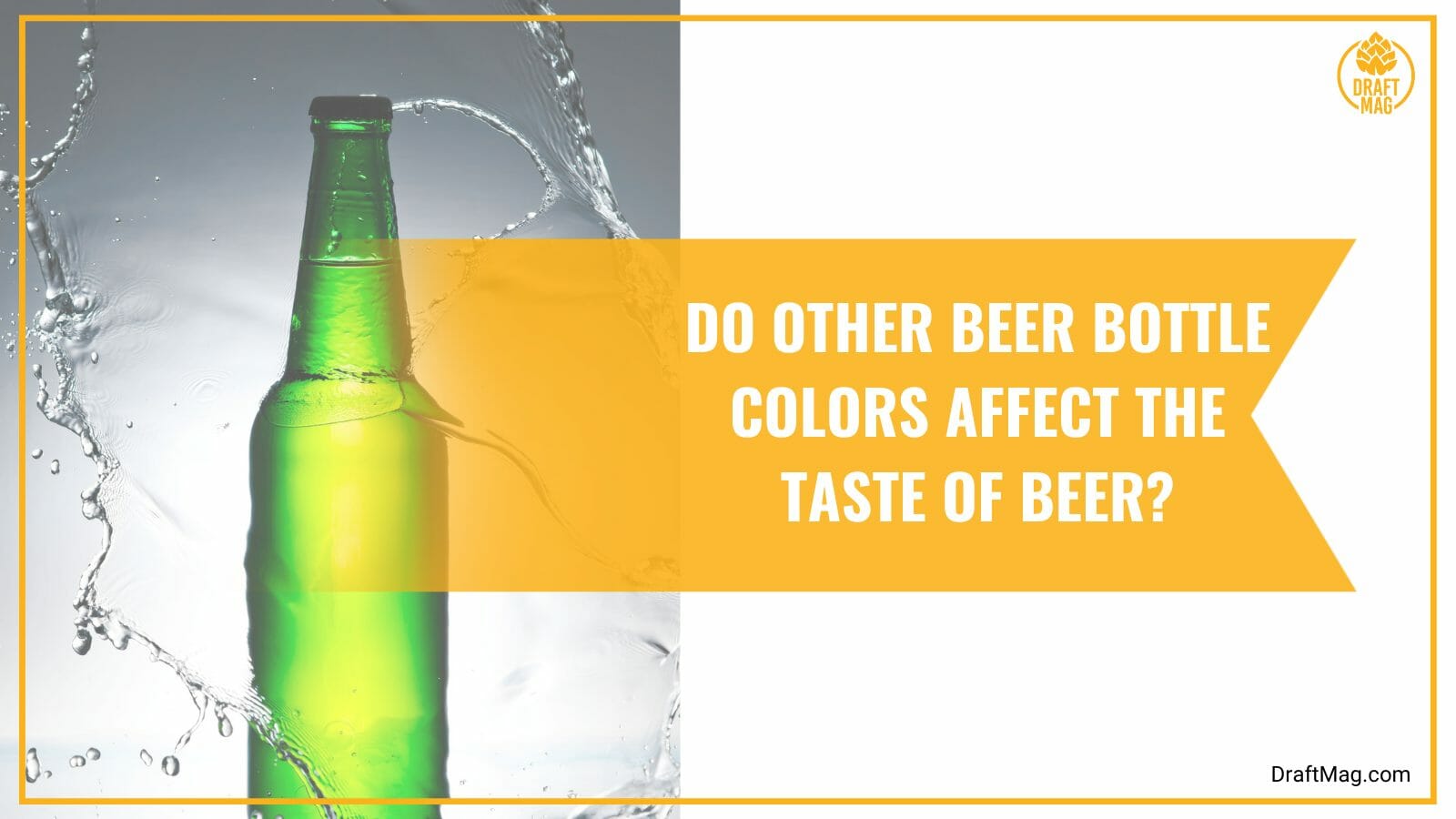 This term originated from the idea that this altered smell and taste of the beer is almost similar to a skunk’s spray, hence the term “skunky.” So, yes, the taste of beer changes considerably when it is stored and sold in light-colored or transparent bottles. But the word skunky is a very locally used informal term coined by beer lovers worldwide.

The original term used for beer that comes in contact with light is called “lightstruck.” This is the more official and formal term prevalently used in the brewing industry. Therefore, any beer which uses hops is subject to becoming skunky when they are exposed to strong and bright lights.

– Best Colors To Use

The white, transparent, and green colored bottles are popularly said to absorb light and alter the primary characteristics of the beer. Hence, the darker the color of the beer bottle, the better it is at retaining the original taste of beer. Therefore, most beers across the world are always sold in dark brown color bottles.

– Are Green Bottles Bad for Beer?

No, beer does not necessarily taste bad in green bottles, but dark, green bottles tend to attract and absorb light, so if you expose green-colored beer bottles to the light, then the taste of beer can go bad much quicker. That is why brewers only bottle their best beers in green bottles. 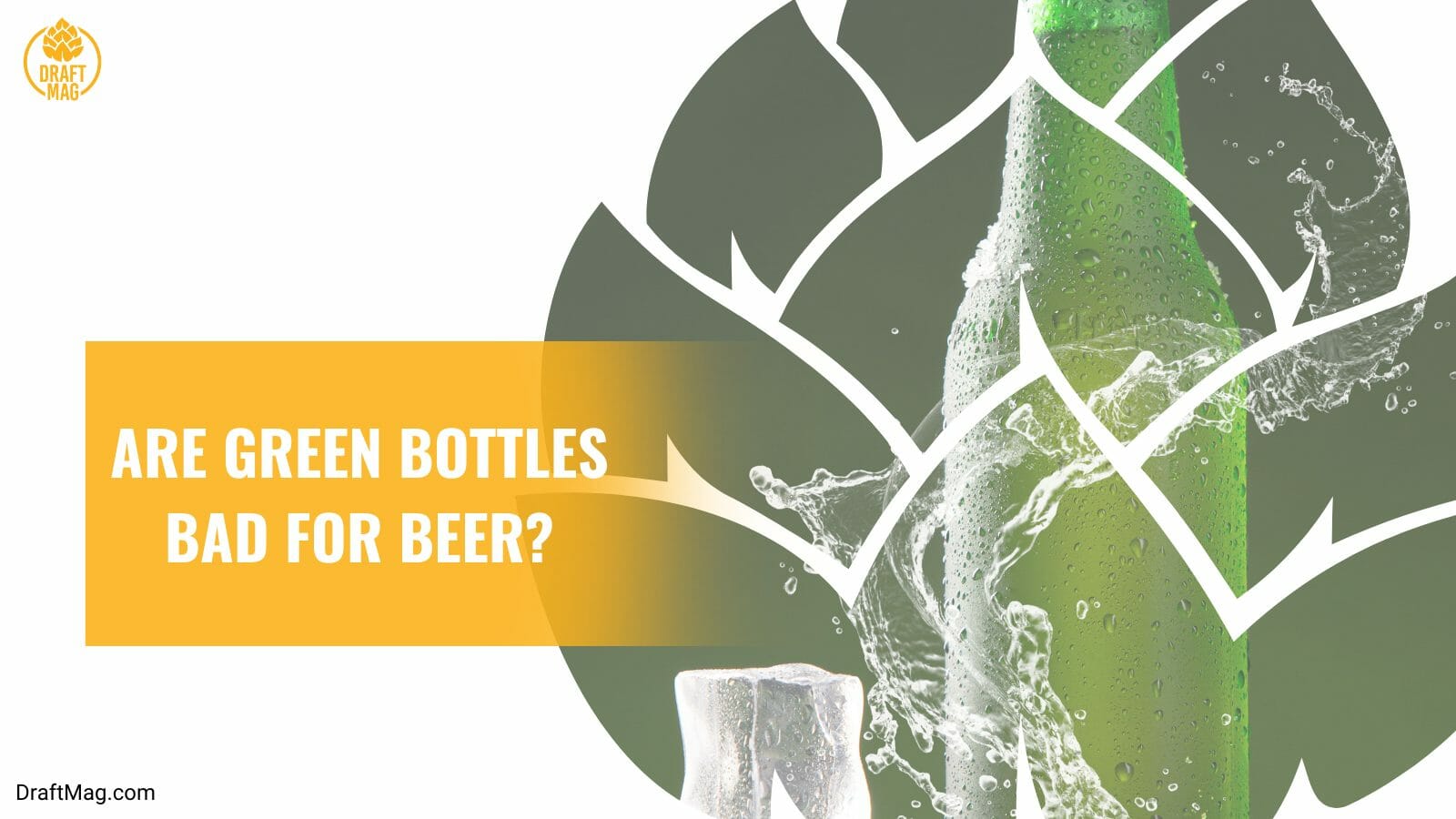 The most popular color for beer bottles is generally brown or dark brown, but it can also range between dark shades of green and blue. Some beer producers also produce transparent and white colored bottles. The color of the bottles is totally customizable, so there is no specific color for any beer bottles; it all depends on the brand.

– Can You Bottle Beer in Clear Bottles?

Yes, you can definitely bottle beer in clear-colored bottles. In fact, clear glass bottles were the first type of bottles that beer was produced and sold in. To date, many brands like Miller and Corona sell beer in clear bottles. But it is highly advisable to store transparent beer bottles in dark places to avoid the beer from falling flat and losing its original taste.

Beer is one of the world’s oldest and most well-known alcoholic beverages, but brown and green beer bottles have been the most commonly-used among most of them, so let us sum up why this happens.

Do you want to experience if the color of beer bottles actually affect their taste? It is better to try out beer from bottles of different colors to make an informed decision.